Football player, 9, is kicked off team for racist slur

A nine-year-old peewee football player has been kicked off of his team for calling an opponent a n***** during a game.

The racist slur was used by a player for the Ludlow Lions in a game against the Amherst Hurricanes on Sunday.

The mother of the player who the slur was aimed at, Stacia London, told MassLive that her son Kordell had just called out to referees about an illegal tackle he believed a member of the opposing team had just made.

The Lions player, who hasn’t been named, responded by telling Kordell to mind his own business and then calling him a n*****, London said.

‘He has never experienced something like this before,’ she said about her son, who made two touchdowns during the game.

The remark was loud enough that game officials, other players, parents and coaches all along the sideline heard it clearly, at which point the game was ended. 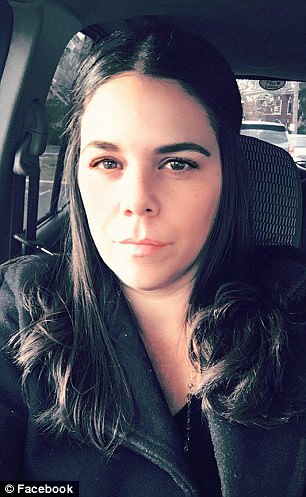 The mother of the player who the slur was aimed at, Stacia London (pictured), said that her son had never been called that word before, and that she would appreciate a written apology letter from the offending player

The Ludlow program has sent an apology letter to the Amherst program to say it was ‘ashamed’ of what happened, and the player has been removed from the team and will be barred from playing in the league next year.

‘There is no place for that kind of language in youth sports, or anywhere else in society,’ the letter read.

‘This is definitely not the culture and attitude we are trying to instill into these young impressionable athletes.’

However, London has said that she would appreciate a written apology from the child, signed by his parents.

The boy’s father, Michael London, and the offending player’s parents spoke to the boy about the incident, and he said the adults turned it into a lesson about adversity and about not reacting to provocation.

‘I think he’s hurt,’ Michael said about his son. ‘It was the first time. He’s never going to forget that.’

He said that bringing attention to the story isn’t about ‘being a victim.’

‘I spoke with my son. He was more mad that the game had ended than being called a particular word. It was a teachable moment,’ London explained.

According to Stacia, Ludlow forfeited the game after the player was pulled because they didn’t have the minimum number of players without him.

The score finished with a score of 24-0 in favor of Amherst; Kordell had scored two of his team’s touchdowns.