Retired NRL player Robbie Farah has opened up about being rejected by tennis Eugenie ‘Genie’ Bouchard.

The former Wests Tigers hooker sent the 26-year-old a number of flirtatious Twitter messages on February 1 while holidaying in Miami for the Super Bowl.

‘Surely you’re having a drink with me in Miami,’ Farah tweeted at Bouchard along with a kissing face emoji. 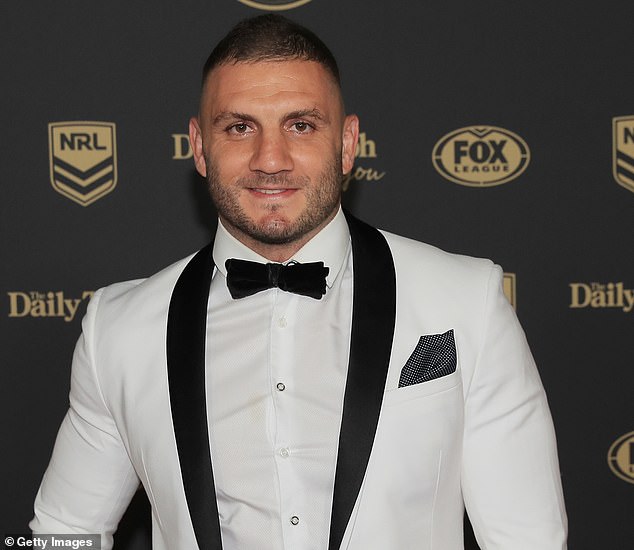 In a follow up tweet eight minutes later, he added: ‘If I rub you do I get 3 wishes?’

But when quizzed about the public attempt to woo the Canadian on Fox League Live, the 36-year-old brushed the incident off as a drunk joke between friends.

‘I was in Miami and I was pissed. I was with a bunch of mates and we thought it’d be funny if I sent her a message,’ he said.

‘The next day it blew up in the media. I had all these people having a go at me, some people thought it was rude or whatever.’

The football legend said the 2014 Wimbeldon finalist never replied, saying there was ‘no reply. Crickets.’

He also revealed he met with Gordon Tallis in Miami, with whom he once shared a bitter feud in 2014.

Farah unleashed a three-minute post match verbal tirade on Tallis over ‘false claims’ he had made regarding Farah and his Tigers’ coach Michael Potter.

While walking through the lobby at the Fontainebleu hotel in Miami, Farah said he heard Matty Johns call out his name from a nearby cafe.

Johns called out that he was with Gordie, and beckoned him over to ‘let bygones be bygones’.

Farah said the pair exchanged their views, but both thought they were still right, so agreed to disagree.

The West Tigers legend said they had ‘sort of’ healed their disagreement,but conceded that he had once ‘hated his guts’ and could still ‘hold a grudge’.

Bouchard is no stranger to admirers reaching out to her on social media.

Last month, the tennis star agreed to a go on a £3,200 charity date to provide meals to healthcare workers after a fan offered payment for the opportunity over Instagram.

Back in September, she was reported to be dating Connor Davis, the brother of former tennis player Hannah Jeter.

However, the athlete’s relationship’s status was thrown into doubt in March when she tweeted: ‘I feel like quarantine would be a lot more fun with a boyfriend’.

Farah and his long-term girlfriend Rina split in 2019, the same year he called time on his 17-year NRL career.