Ford backs down after ordering Donald Trump to wear a mask

Ford Motor Co. quickly backed down after telling reporters President Trump would have to wear a mask to tour its Michigan-based ventilator plant on Thursday.

CBS News reported Tuesday that Ford’s policy was that every person must wear personal protective eqipment, which includes masks, to tour its sites.

‘Our policy is that everyone wears PPE to prevent the spread of COVID-19. We shared all of Ford’s safety protocols, including our manufacturing playbook, employee pamphlet and self-assessment survey with the White House ahead of time and in preparation for this trip,’ spokeswoman Rachel McCleery first told the network.

The White House has yet to respond to a request for comment from DailyMail.com on whether Trump will indeed sport a mask.

But Ford quickly sent a revised statement to CNBC after the outlet reported on the Ford policy.

The White House has its own safety and testing policies in place and will make its own determination’ about whether Trump and White House officials will wear masks during the visit.

The president is expected to travel to Ypsilanti, Michigan, to tour the Rawsonville Components Plant, which is currently making ventilators that can be used to treat COVID-19 patients. The company plans to produce 100,000 ventilators by July 4, working with GE Healthcare on the project.

President Trump will likely have to wear a mask to his planned visit of a Michigan Ford Motor Co. factory on Thursday, CBS News first reported. Trump has resisted wearing a mask, telling aides behind-the-scenes that he fears he’d look ridiculous 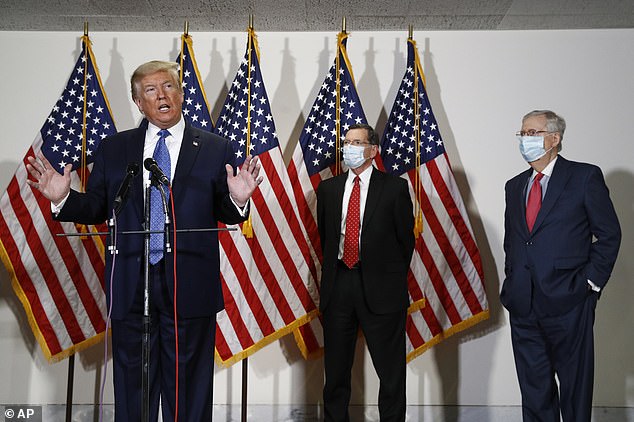 President Trump is the highest ranking U.S. government official who has refused to wear a mask to protect himself and others from transfer of the coronavirus. He’s said he gets tested continually, and revealed Monday he’s taking hydroxychloroquine

Gov. Gretchen Whitmer, a Democrat, already banned ‘nonessential’ plant tours, but the president’s visit is expected to go on as planned.

So far the president hasn’t been photographed wearing a mask.

He told reporters that he put one on ‘backstage’ when visiting a Honeywell plant in Arizona that was producing N95 masks to help deal with a nationwide PPE shortage due to the coronavirus pandemic.

Trump did not wear a mask when cameras were focused on him.

He did wear safety goggles.

He also didn’t wear a mask when touring a Pennsylvania factory last week that was also producing PPE.

Behind the scenes, the Associated Press reported that Trump told aides it would ‘send the wrong message’ if he put on a mask, as he wants the White House to look focused on reopening the country, not the continued spread of the virus.

He also said he’d look ridiculous and that he feared those visuals would be used in attack ads. 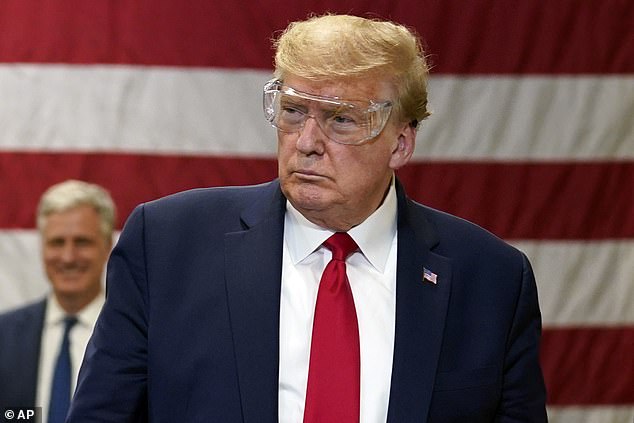 MAY 5: President Trump did not wear a mask to a Honeywell mask plant, but did wear protective safety goggles 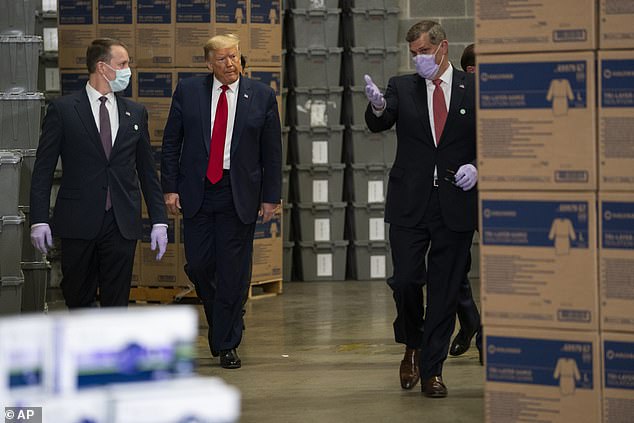 MAY 14: The president also didn’t wear a mask nor gloves when he toured a medical supply company on Thursday in Allentown, Pennsylvania

When the Centers of Disease Control and Prevention first put out an advisory that Americans should wear face coverings, Trump said he wouldn’t be doing it.

‘Well, I just don’t want to wear one myself,’ he said at an April 3 press briefing.

‘I just don’t want to be doing – I don’t know, somehow sitting in the Oval Office behind the beautiful Resolute Desk – the great Resolute Desk – I think wearing a face mask as I greet presidents, prime ministers, dictators, kings, queens, I don’t know. Somehow, I don’t see it for myself,’ Trump said. ‘I just – I just don’t. Maybe I’ll change my mind.’

In the six weeks since, he’s held his ground.

Vice President Mike Pence, who took heat for not wearing a mask to the Mayo Clinic in Minnesota, has sporadically been seen in a mask, but the president has resisted.

At Friday’s Rose Garden event, Trump told reporters that he had told members of the coronavirus taskforce in attendance that masks were optional.

Most of the medical professionals kept their masks on, while Trump and Health and Human Services Secretary Alex Azar went bare-faced.

‘So you can blame it on me,’ Trump said.

On Monday, Trump made the shocking announcement that he was taking hydroxychloroquine, an anti-malaria drug he’s been touting, in order to not contract the coronavirus.

‘I happen to be taking it – hydroxychloroquine,’ Trump said. ‘Right now, yeah. A couple of weeks ago I started taking it. I’ve heard a lot of good stories. And if it is not good, I will tell you, right? I’m not going to get hurt by it. It has been around for 40 years for malaria, for lupus, for other things, I take it.’

Medical professionals, including HHS whistleblower Dr. Rick Bright, have warned the public about hydroxychloroquine’s side effects, recommending Americans not take the drug unless under the direct supervision of a physician.