‘Forget about him struggling with Argentina… this move is MAD’: Fans stunned by Lionel Messi after he leaves Paraguay midfielder for dead with lightning fast body feint

For Lionel Messi, the present Copa America campaign with Argentina has, so far, been another bruising affair on the international stage.

Defeat by Colombia followed by Wednesday night’s draw with Paraguay means Argentina need results to go their way in the final round of group matches or their tournament is over.

But while Argentina have faltered, Messi has still shown flashes of his sparkling best. 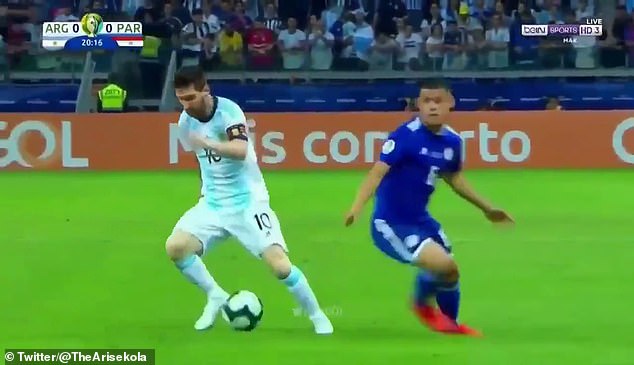 The most recent glimpse came against Paraguay, with Messi showing such an incredibly deliberate feint that Richard Sanchez was brushed aside before he had even touched the ball.

‘Forget about him being struggling with this Argentina team, this Messi’s move is MAD,’ one Twitter user wrote.

Another said: ‘No one has quite mastered body feint like Messi has.’

But it wasn’t all embarrassment for Sanchez, as he scored to put Paraguay into the lead against Argentina.

Messi equalised from the penalty spot in the 1-1 draw between the two nations.