Forget Mexico paying for the wall, now the military could eat the costs, Trump suggests

President Donald Trump may have found a new source of funding for his border wall — the U.S. military.

Trump suggested that the $25 billion he’s asking for could come from the Pentagon in a Sunday tweet.

His White House press secretary did not deny in a Tuesday news conference that Trump was eyeing the defense department’s massive budget for his border barrier.

White House Press Secretary Sarah Sanders merely said she was ‘not going to get into the specifics of that’ as she was questioned about Trump’s plan.

President Donald Trump may have found a new source of funding for his border wall — the U.S. military

On Friday, the president approved an omnibus spending bill that gave the military a major boost in funds. Trump nearly vetoed the measure but put his name to it, he said, as a matter of national security.

Explaining it in a Sunday tweet, the president said, ‘Because of the $700 & $716 Billion Dollars gotten to rebuild our Military, many jobs are created and our Military is again rich.’

But then he said, ‘Building a great Border Wall, with drugs (poison) and enemy combatants pouring into our Country, is all about National Defense. Build WALL through M!’

The ‘M’ was short-hand for military — revealing Trump’s apparent desire to tap Pentagon funds for the border structure he originally said that Mexico would pay for.

Asked to say Tuesday what Pentagon programs Trump intends to make cuts to in order to fund the wall, Trump’s spokeswoman dodged.

‘You know, I can’t get into the specifics of that at this point. But I can tell you that the continuation of building the wall is ongoing,’ she said, ‘and we’re going to continue moving forward in that process.’

Trump’s border wall has become a wedge issue between the United States and the country it shares a southern border with. Mexican President Enrique Pena Nieto is one of the few heads of state from an allied country that Trump has not met with since taking office.

Pena Nieto and Trump have repeatedly called off visits to the White House over the dispute.

Mexico has said unequivocally that it will not pay for the border barrier that Trump promised he’d build in the 2016 election.

Trump has said he will exact the charges through new trade regulations that the two countries and Canada are currently negotiating.

‘I think he still has plans to look at potential ways for that to happen,’ Sanders said Tuesday of Trump’s desire to make Mexico fund the barrier.

On the front end, the president has asked the U.S. Congress to fund the border structure. 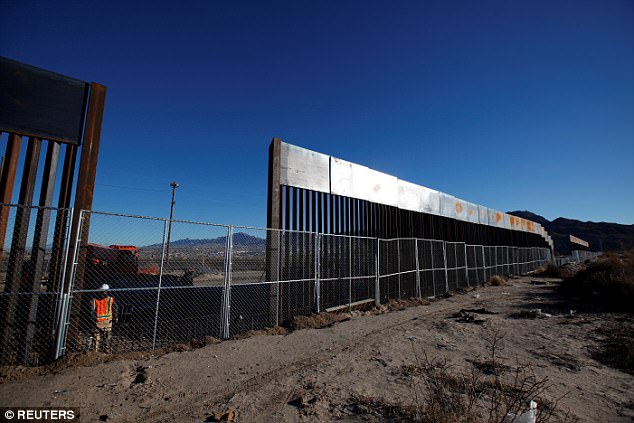 More than half of the 110 funded miles – 63 in all – will look like this section, with replacement ‘bollard walls’ going up so weaker fencing can be torn down 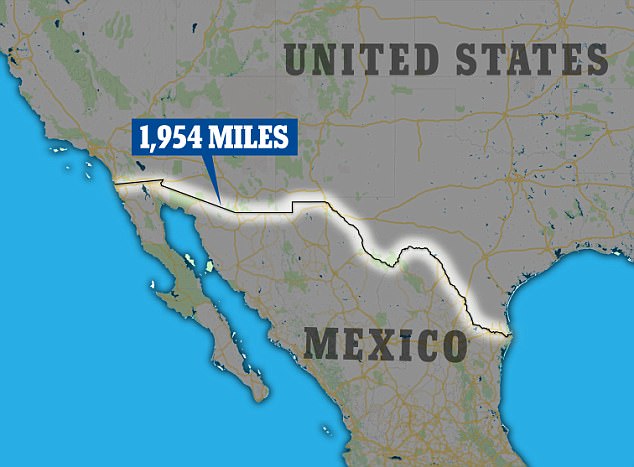 Trump has said he would only need to build between 700 and 900 miles of walls to secure the border; more than half of the 1,954 miles is lined by ‘natural barriers’ like mountains and rivers

Legislators have steadily rejected his demands for the full amount of money, which his administration now puts at $25 billion. They granted him a $1.6 billion reprieve in the spending document he signed Friday that will buy him six months of time and materials, however.

The money covers the costs of 14 miles of secondary fencing in San Diego along the border, Fox News reported, and 25 miles of ‘primary pedestrian levee fencing’ in the Rio Grande sector.

The rest of the funds will go toward the ‘replacement of existing primary pedestrian fencing along the southwest border, in addition to ‘planning and design,’ and border security technology.’

Congress approved fewer miles of new wall than the White House asked for in fiscal year 2017, authorizing repairs to existing wall instead.

‘Not exactly what we wanted, where we wanted,’ Office of Management and Budget Director Mick Mulvaney admitted. ‘Congress chose to ignore some of the suggestions that [Customs and Border Protection] made on where the best kind of wall should go and that’s unfortunate.’

Lawmakers fulfilled the entire $1.6 billion request for the fiscal cycle, however, with the other money being appropriated to repairs for 63 miles of fencing that was already there.

Ordinary fencing already stretches along 650 miles of the border. An administration official said last week that a stronger wall ‘would have to be replacing all of that.’

The president indicated during his campaign that the entire 1,954 miles of U.S.-Mexico border would have physical protection from illegal immigration and the drug trade, although the White House has taken the stance that mountains and other natural barriers will do the trick in many places and only 700-900 miles of border wall is necessary.