A former New York City stripper who was at the top of her game in the 1970s has delighted social media users with wild tales from her life, inspiring commenters to call her ‘iconic’ and demand she get a book deal or her own Netflix show.

The woman, who is known only by her former stripper name Tanqueray, posed for Humans of New York this week — and in three posts, she shares story after outrageous story of mob-controlled clubs, eyebrow-raising stage acts, and even a former president of the United States who slept with one of her friends.

Lots to tell! A former New York City stripper who was at the top of her game in the 1970s has delighted social media users with wild tales from her life

He also snapped her inside a diner wearing a leopard blouse, showing off a framed photograph of herself from her dancer days.

While Tanqueray’s fabulous fashion sense is certainly grabbing, it’s her story that has enchanted hundreds of thousands of Instagram users. 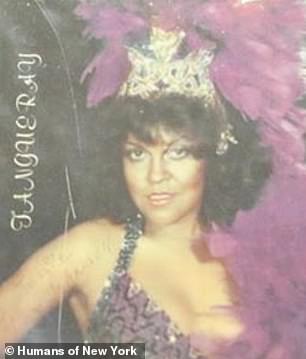 Way back when: Tanqueray is seen in an image taken during her days as a stripper

‘My mom threw me out of the house at seventeen for getting pregnant, then had me arrested when I tried to get my clothes,’ her story began.

Her mom then had sex with the head of the parole board in an attempt to keep her in jail.

‘She was some prime p***y back then,’ she said. ‘But the warden did some tests on me and found out I was smart, so I got a scholarship to go anywhere in New York.’

‘All my friends were gay people, because they never judged me. All I did was gay bars: drag queen contests, Crisco Disco; I loved the whole scene,’ she said. ‘And I couldn’t get enough of the costumes.’

She recalled a friend who use to sit at a bar and sell clothes stolen from the high-end department stores Bergdorf Goodman and Lord & Taylor, and thanks to those hot goods, she had quite a wardrobe herself. She recalled wearing mink coats, five-inch heels, and stockings with seams up the back.

‘I looked like a drag queen, honey,’ she said. 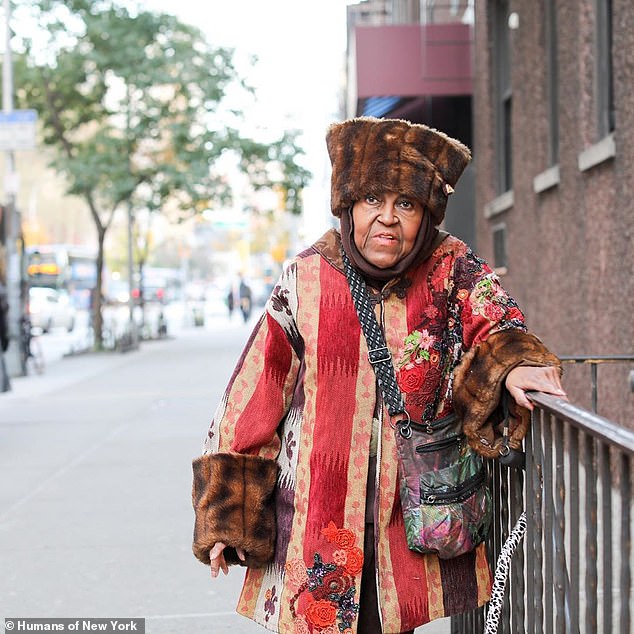 More, please! The woman, who is known only by her former stripper name Tanqueray, posed for Humans of New York this week and shared tales from her amazing life 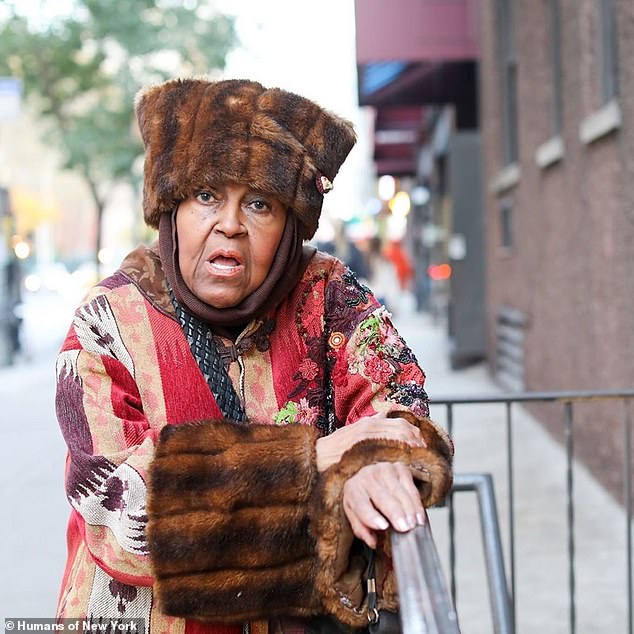 She shared story after outrageous story of mob-controlled clubs, eyebrow-raising stage acts, and even a former president of the United States who slept with one of her friends

‘One night a Hasidic rabbi tried to pick me up because he thought I was a tranny. I had to tell him: “Baby, this is real fish!”‘

The woman didn’t reveal her real name, but her stripper name was Tanqueray, and she says she was ‘the only black girl making white girl money’ in the ’70s.

‘I danced in so many mob clubs that I learned Italian,’ she went on. ‘Black girls weren’t even allowed in some of these places. Nothing but guidos with their pinky rings and the one long fingernail they used for cocaine.

‘I even did a full twenty minutes in the place they filmed Saturday Night Fever.’

She said she made her ‘real money’ traveling, making up to three thousand dollars on trips to places liked Fort Dix, where they’d call her ‘Ms. Black Universe.’

‘I had this magic trick where I’d put baby bottle tops on my nipples and squirt real milk, then I’d pull a cherry out of my G-string and feed it to the guy in the front row.’

‘In fact, one night after a show, I caught another dancer sneaking off to the Tate Hotel with our biggest tipper. Not allowed. So the next night we put a little itching powder in her G-string. 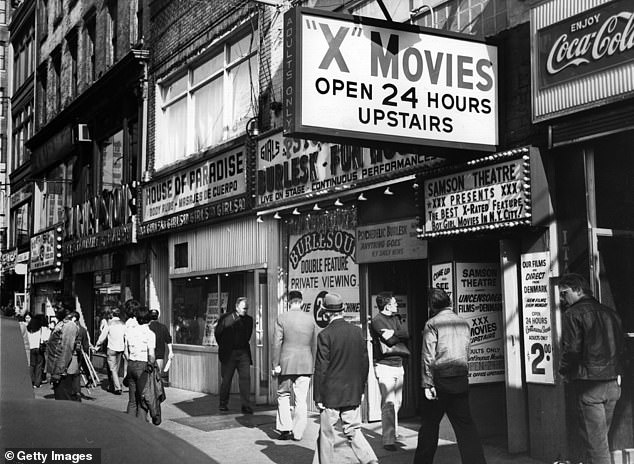 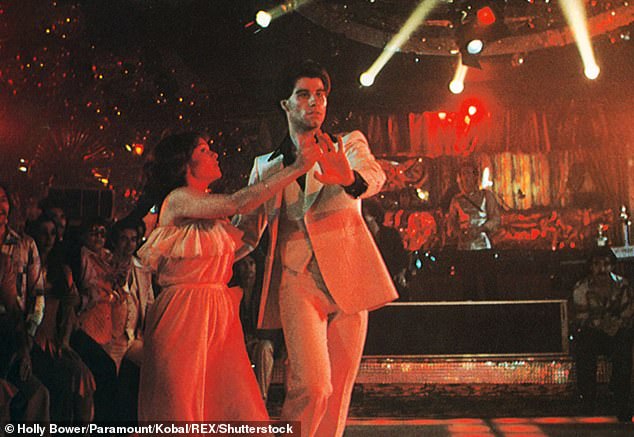 On the scene: Tanqueray says she performed in the same nightclub where Saturday Night Fever was shot – a place that was known as 2001 Odyssey (pictured)

‘Boy, did she put on a show that night. Didn’t see her again until “The Longest Yard” with Burt Reynolds. So I guess she finally f***ed the right one.’

She also reflected on how the strip club scene was different then that it is now, noting that the adult clubs were all ‘mob-controlled’ — specifically by ‘Matty The Horse,’ the nickname for mob boss Matthew Ianniello of the Genovese crime family.

Ianniello did control the sex industry around Times Square in the ’60s and ’70s, but was in 1986 was convicted of bid rigging racketeering charges.

‘Honestly the mob guys never bothered me,’ Tanqueray said. ‘They were cool, and I liked how they dressed. They wore custom made suits. And they went to hair stylists, not barbers. 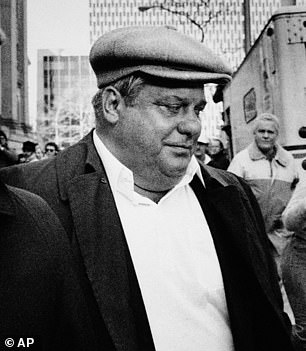 This guy: She said the strip club scene was ‘mob-controlled’ — specifically by ‘Matty The Horse,’ the nickname for mob boss Matthew Ianniello of the Genovese crime family

‘These guys wouldn’t even let you touch their hair when you were f***ing them. Not that I ever f***ed them. Because I never turned tricks.

‘Well, except for one time,’ she added.

She took a job from a woman named Madame Blanche who controlled all the ‘high dollar prostitutes’ at the time.

‘She was like the Internet — could get you anything you wanted. And all the powerful men came to her because she never talked,’ she recalled.

‘She set me up with a department store magnate who wanted a black girl dressed like a maid. I thought I could do it. But when I got to his hotel room, he wanted to spank me with a real belt. So that was it for me. I was done.

‘But Madame Blanche set my best friend Vicki up with the President every time he came to New York. And don’t you dare write his name cause I can’t afford the lawyers,’ she added.

‘He’d always spend an hour with her,’ she went on. ‘He’d send a car to pick her up, bring her to his hotel room, put a Secret Service agent in front of the door, and get this: all he ever did was eat her p***y!’

Tanqueray’s story ended there — but it left readers thirsty for more.

Celebrities like Hilary Swank, Busy Philipps, Phoebe Robinson, Matt Bomer, and Ireland Baldwin liked the posts, while Jennifer Garner demanded, ‘Why is this not a @netflix series?’