Sarah Toth was just 15 when she tried Percocet, a powerful painkiller which includes oxycodone.

She liked the numb high and kept doing it, also dabbling with LSD, shrooms, ecstasy and heroin. On her 17th birthday she tried snorting a now-banned form of OxyContin, one of the strongest opioids on the market, made of pure oxycodone.

The next two years were a blur. By 19 she was desperate to get clean, but she was hooked; she couldn’t sleep if she didn’t take a hit.

She started taking methadone, the government’s recommended replacement therapy for recovering addicts, but Sarah described it as ‘liquid handcuffs’, keeping her craving. She’s taken methadone every single day for the past seven years.

But in 2012, at the age of 20, her life changed: she discovered ‘whispering therapy’ on YouTube. The videos typically involve a softly spoken woman stroking hair, or flipping the pages of a book, to stimulate the viewer and trigger a tingly sensation.

Now 26 and clean, Sarah says those videos saved her life.

In fact, she now has her own whispering therapy YouTube channel, earning enough in advertising to support her husband and two children.

Clean: Sarah had her son Odin, four, when she 21. A year later she had Satori, three. The children were taken away from her by Pennsylvania child protective services for two years in June 2015 after her father died and she plummeted into a low point. But she got herself stable and now earns enough money from her YouTube channel to support her whole family

This field of YouTube therapy is known as autonomous sensory meridian response (ASMR). In layman’s terms, that means a tingling sensation on the skin that typically begins on the scalp and moves down the back of the neck and upper spine.

Sarah stumbled across ASMR videos while looking up a man who made videos of himself massaging doll heads.

When she arrived at the man’s channel, she was embarrassed to realize that the videos made her feel incredibly relaxed and ‘tingly’. In the recommendation bar she found another video account that gave her the same feeling. It was all ASMR.

For Sarah, it was a breakthrough. Watching ASMR videos helped her fall asleep before she started craving another line of Oxycontin.

‘When I used to consider using I would say, “maybe I should take a nap,” but I couldn’t fall asleep. So I watched ASMR.

‘When you’re trying to stay off drugs, sleeping is a huge thing and a very hard thing.

‘When I was watching ASMR videos, for once it would be nodding off but not from drugs.’

There is scant research on ASMR videos as an accepted form of therapy. In fact, more than a dozen clinical psychiatrists at top institutions in the US told Daily Mail Online they refused to analyze it as a valid form of therapy.

Penn State professor of psychology Rich Carlson told the university’s student newspaper that the soft sounds could be stimulating the brain in the same way as music or natural sounds like waves.

‘That might work by providing something to pay attention to other than stressful thoughts, or perhaps by providing an external stimulus to which breathing might be synchronized,’ he said.

‘They might also work by giving people a focus for achieving a meditative state. Research has provided evidence that this can help with anxiety.’ 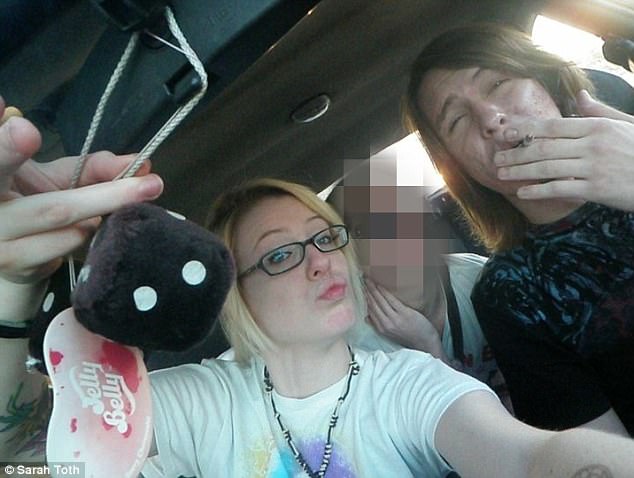 Dark days: Sarah, pictured aged 18 at the peak of her addiction. She and her two best friends ‘were on around three OxyContin 80s, pills so strong they don’t make them anymore’ 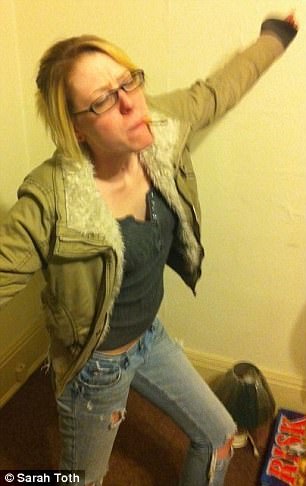 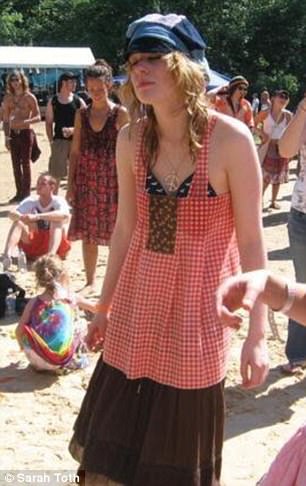 Sarah started taking Percocet when she was 15. In the next four years she tried LSD, shrooms, ecstasy, heroin and OxyContin. By age 19 she was desperate to get clean. Pictured: Sarah (left) on heroin at the age of 17, and (right) on mushrooms and ecstasy aged 15

Autonomous sensory meridian response (ASMR) is characterized by a static-like or tingling sensation on the skin that typically begins on the scalp and moves down the back of the neck and upper spine.

There are three main triggers:

There are only two peer-reviewed studies focused on it. At least four more are in the pipeline according to Dr Craig Richards with ASMR University, an online community devoted to researching the topic.

‘There is a shortage of research because the understanding of ASMR is so new,’ he said. ‘Research works fastest when there is prior research to base further studies on.’

Richards said ASMR may benefit people struggling with anxiety and depression, but there isn’t any proven direct evidence yet.

‘A 2015 research paper reported the 500 participants in the study watched ASMR videos to relax and to deal with stress and that watching ASMR videos had a positive effect on their depression,’ Richards said.

‘Another strong area of support for the potential helpfulness of ASMR are the thousands of comments posted on online forums, Facebook groups, the ASMR subreddit and especially YouTube videos. Although this type of anecdotal evidence is weak, the sheer volume of it has helped to bring attention and focus to the potential therapeutic value of ASMR,’ he said.

As for the ‘tingly’ sensation that so many people report, Carlson said: ‘It would be interesting to understand the mechanism of this phenomenon, but I haven’t seen anything that resembles it in the scientific literature.’

Hammering home his skepticism, Carlson says, ‘often the public’s enthusiasm for a phenomenon far exceeds the eventual scientific evidence for it’.

He says that our desire for something to work (a placebo) can often be enough for it to function.

However, he admitted he was surprised that he too felt a tingly sensation when listening to the videos (‘although to me the sensation was not especially pleasant’).

For Sarah, it did work – and the impact was so powerful she claims it was the key to getting clean.

Beyond soothing her dependence on drugs, she says it also helped her regain her self-esteem – something therapists say is one of the biggest stumbling blocks for recovering addicts – by making her own videos.

Her personal venture started in 2014.

‘As an addict I felt worthless. When I started making videos, the praise I got from people in my family and everyone,’ Sarah said.

Sarah now has nearly 170,000 subscribers on her YouTube channel, Karuna Satori ASMR. Through advertising she makes enough money to support her husband and two children. While she was unable to disclose her earnings because of AdSense rules, she told Daily Mail Online that her three-bedroom home costs $395 a month in rent, all covered by her ASMR income.

Sarah joined a methadone clinic in early 2011 when she was 19. She met her husband at the clinic when she was 20.

‘They say never to get in a relationship with another recovering addict but it actually saved our lives and saved us a lot of pain and heartache for what addicts go through,’ she said.

They had a son, Odin, now four years old, when she was 21. A year later they had Satori, now three years old.

In three months Sarah will be off the methadone.

In 2015 Sarah hit a rough patch. Her children, then one and two years old, were taken by social services after Sarah’s father died. The kids were frequently left with her mother-in-law because her husband was working 12 hour days.

Then one day Sarah hit her husband and the cops were called.

‘It was our first and last physical altercation,’ she said.

A judge told Sarah she would never get her kids back.

‘I had a lot of time to spend trying to rebuild my life and get my children back. I decided to throw my cards in and see if a YouTube channel would work for me,’ she said.

Sarah said she has no idea what made her channel a success. But in building an online family, she got her own life back. 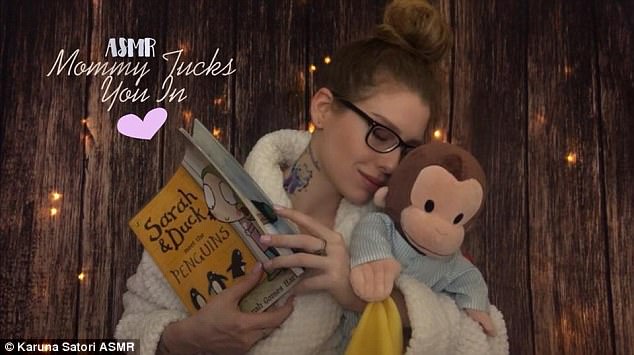 Beyond soothing her dependence on drugs, she says it also helped her regain her self-esteem – something therapists say is one of the biggest stumbling blocks for recovering addicts – by making her own videos (pictured) 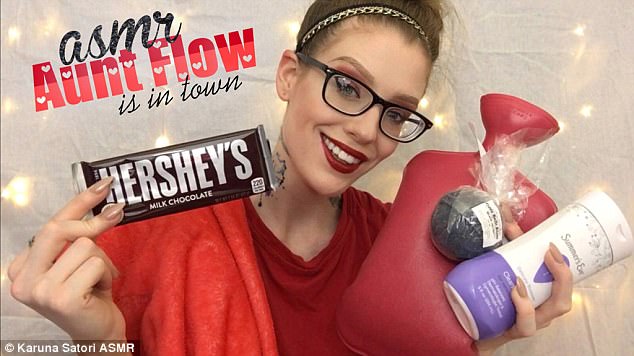 ‘The children are never given back to their mother in this kind of situation, I’m the poster child. It took me two years but I got mine back,’ she said.

Every morning Sarah stops by the methadone clinic at 5.30am before heading to her mother’s house to record an ASMR video in a small room upstairs. The set up includes a clothes basket and a $10 tripod, a red chair, a black sheet, some $10 string lights, one $30 professional light, and a microphone that someone donated to her.

The video ideas come from Sarah or subscriber suggestions. She tries to keep a video schedule for each week so that her subscribers know what to look forward to.

Sarah’s social circle in Johnstown, Pennsylvania, is quite small.

‘A lot of people dislike me from my home town because I can sit at home with my children and make money and here everyone is working and struggling,’ she said. ‘It’s very different from the love I get online. Almost my entire life is on social media.’

Sarah said ASMR saved her life. She tries to make her channel a place that can help others too.

‘On my channel I say we’re a family here, let’s be open and honest with each other. We don’t judge. I think that’s what makes me different from other ASMR artists. Every single day I read at least one testimony that says some version of ‘Your ASMR has helped me get clean’,’ Sarah said. ‘It’s very humbling. As a recovering addict your self-esteem is so low.’

When Sarah learned that she was getting her children back after two years, she didn’t have any clothes or toys for them. She made an Amazon Wishlist and her YouTube family bought items for her.

Not all the feedback is positive, though.

‘I’m open about being a recovering addict so I get a lot of hate,’ she said. ‘We’re all human. I’m not that person that I was. They’re top comments, they’re all liked. But I just go about my day, but you are on the internet. I’m still waking up to my babies every day.’

‘You get a lot of hate but the positivity overwhelms that,’ she said.

The ASMR community is growing rapidly.

‘It’s still such a new thing. I think it’s truly lifesaving, I think in the future it’s going to be a huge thing. ASMR is for everybody,’ she said.

‘I’m very grateful that I get to do this for a living. Growing up I thought I’d never be anything to anyone.’

‘This has been one of the biggest blessings to come my way,’ she said. 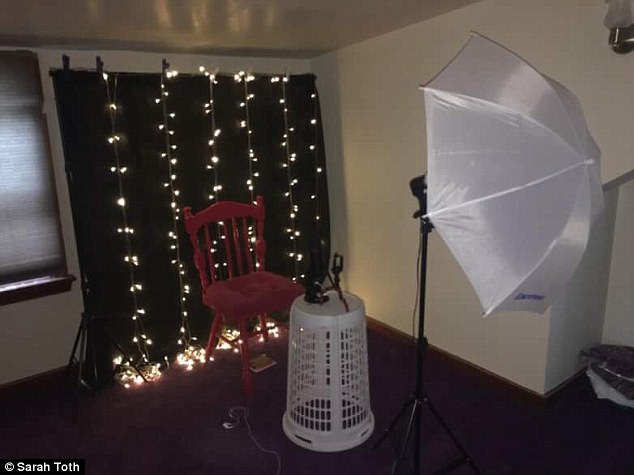 Sarah records her Karuna Satori videos at her mom’s house. The simple set cost less than $50

Methadone clinics explained: How addicts are weaned off drugs on to a safe ‘alternative’ approved by the government

A methadone clinic is a place where a person who is addicted to opioid-based drugs such as heroin or prescription painkillers can receive methadone, an opioid analgesic. The treatment is often referred to as replacement therapy.

Methadone is itself an opioid and can be addictive. It’s possible for some people to become addicted to methadone as they use it to wean themselves off another prescription painkiller.

According to Sarah Toth, a recovering OxyContin addict, methadone is called ‘liquid handcuffs’.

‘It’s the government’s version of a get-out-of-jail-free card,’ she said.

Symptoms of methadone withdrawal include tiredness, anxiety, sweating, and other flu-like symptoms. They typically start to appear 24-36 hours after the drug was last taken.