A former coffee shop boss who left a purple sex toy in her car outside a rival tea room has won an appeal against her conviction for harassment.

Kerry Radley, 47, was alleged to have put the toy on display in her Honda CR-V when it was parked next to the Prima Rosa café in Salhouse, Norfolk.

It followed a long running feud with owner Judith Nudd who she partly blamed for the closure of her her own cafe 20 yards down the road.

Mrs Nudd was left ‘sobbing and shaking’ when she saw the toy next to a card containing the words ‘F***’ and ‘W***’ on the third anniversary of her team room opening.

Miss Radley admitted leaving her car at the spot, saying it was a ‘protest’ because she had been receiving abuse from customers of the tearoom.

But she denied any wrong-doing, saying that the toy was a joke present for a friend and had fallen out of a bag on the back seat without her knowledge.

Norfolk businesswoman Kerry Radley, pictured, has had her conviction for harassing a rival business owner overturned after the Crown Prosecution Service decided against opposing the application 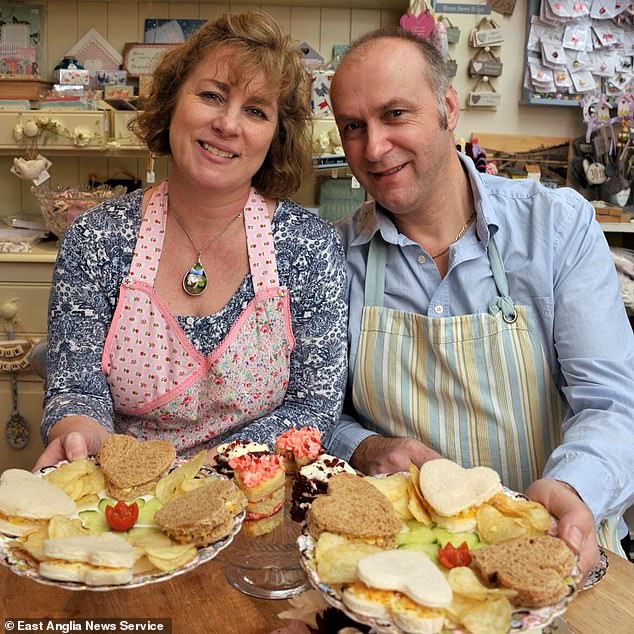 Norwich magistrates heard how tearoom customers saw the toy including young children who asked their mother: ‘What is that purple cucumber?’

Mother-of-three Miss Radley had denied causing harassment and distress to Mrs Nudd, 50, by leaving the objects in her car on May 22, 2018.

She was found guilty by Norwich magistrates in February last year and fined £180, and ordered to pay £250 in costs and a £30 victim surcharge.

But Miss Radley had her conviction overturned at Norwich Crown Court on Wednesday after the Crown Prosecution Service decided it was ‘not in the public interest’ to oppose her appeal.

It means that she will now have her fine and costs refunded.

Oliver Haswell, who represented Radley, said the decision had ‘brought an end to some torment’ for her. 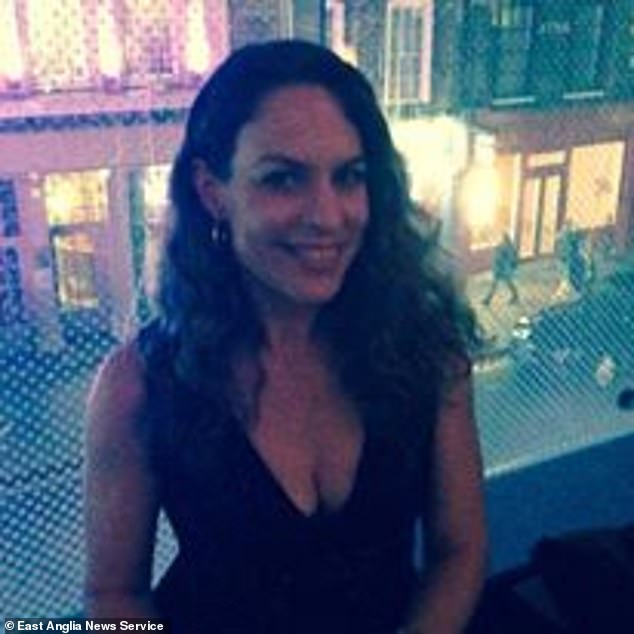 Ms Radley, pictured, was fined £180, and ordered to pay £250 in costs and a £30 victim surcharge following her conviction at Norwich Magistrates’ Court in February, 2019

Speaking after the decision, she said she had been hoping for justice for five years and said she was now ‘over the moon’.

Miss Radley added that the matter had ’caused her family and friends stress and anxiety.’

She was cleared at the original hearing of two other charges of harassing two women customers of the tearoom who were offended by the sight of the sex toy.

Miss Radley opened her trendy artisan coffee shop called Radley’s with a combined post office and shop in August 2014, claiming she invested £75,000 in it. 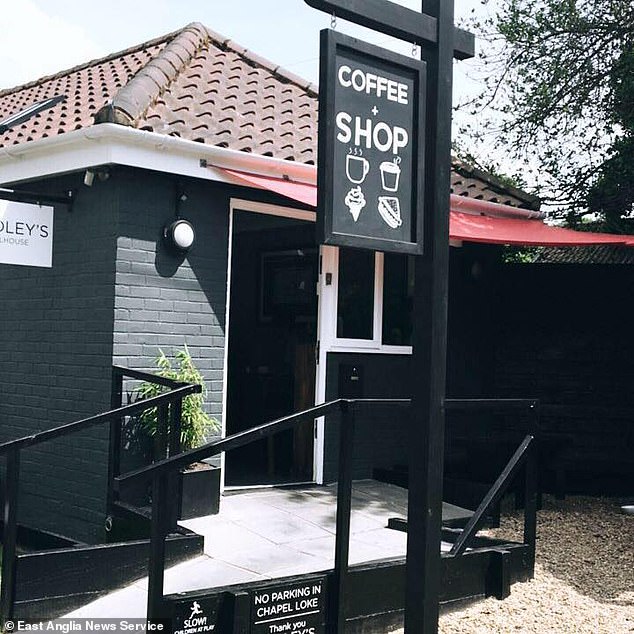 Miss Radley opened her trendy artisan coffee shop called Radley’s with a combined post office and shop in August 2014, claiming she invested £75,000 in it

The simmering rivalry between the two businesses quickly boiled with both owners accusing the other of intimidating and abusive behaviour.

Mr and Mrs Nudd claimed that Radley waged a campaign of harassment against them, by repeatedly taking photographs of their premises and staring in.

Radley complained that her posters went missing, a sign was vandalised, and fake bad reviews about her business were posted online.

The Nudds denied being responsible for any of the incidents she described.

Radley who has lived in Salhouse for 22 years finally closed down her business in September 2017, claiming the ill-feeling was partly to blame.

She was issued with a Community Protection Notice in December 2017 by Broadland District Council over claims that she had caused anxiety to Mrs Nudd.

The order banned her from staring into the Prima Rosa café from a vehicle, whether moving or stationary, entering the café or taking photographs of it, or customers, without permission. 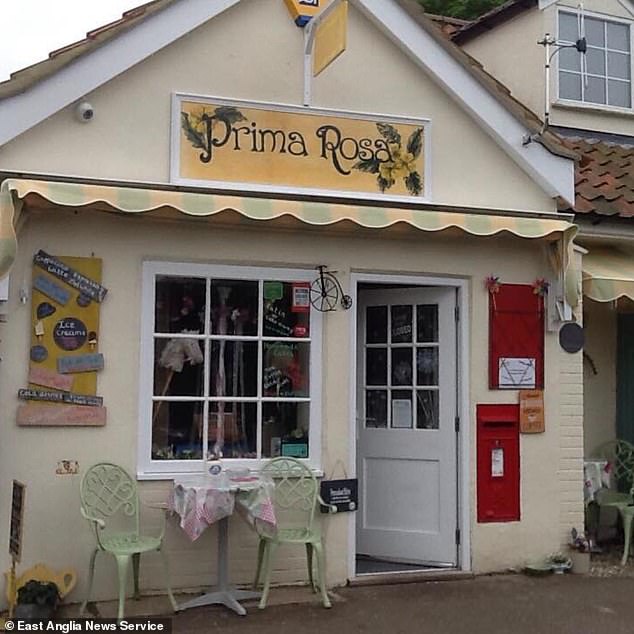 She could have been fined up to £2,500 for breaking the conditions.

Radley appealed against the order and it was withdrawn by the council in January, 2018. The council also paid her costs of £1,200.

Mrs Nudd gave evidence via video last February, saying the sight of the sex toy made her feel ‘awful’.

She told the court: ‘This has been going on for so long now, it is total harassment. All I have ever wanted was to be left alone.’

Prima Rosa customer Josephine Allen said: ‘The car was about two or three feet away from the shop window. I noticed inside the car was a purple sex toy on the back seat. There was also a card with swear words on it.

‘On the front passenger seat was an opened copy of the Daily Star showing a topless woman.’

She said Mrs Nudd was ‘utterly distraught’ when she spoke to her about it.

Ms Allen said: ‘She was sobbing and shaking. I was pretty shocked, because it’s not the every day thing you would see in a tiny rural village in the back seat of a car.’

Another customer, Amanda Geary said she visited the café on May 23, 2018, with her two children, aged eight and nine.

Describing how her children looked into the car as they walked ahead, she said: ‘They asked ‘What is that purple cucumber?’

She added: ‘They focused on the back seats which had a very large purple sex toy and a card they were reading which had [a rude word] on it.’

The court heard how there had been ‘considerable enmity’ between Radley and others in Salhouse, including Mrs Nudd and Mrs Allen.

Radley said she parked outside the tearoom after receiving abuse from a ‘handful’ of people who left her threatening phone calls.

She told the court it had been a ‘protest’, but claimed she did not mean to cause any offence.

Radley added: ‘It was just that I had received so much online abuse.. I didn’t mean to cause any offence to anyone.’

She said she had left two notes on the car’s dashboard – one reading ‘OTT’ and another claiming she would only move her car once the Nudds ‘and their friends’ stopped harassing her.

Radley insisted that the sex toy and the other items could not be seen unless someone looked inside the car.

When asked about the sex toy and explicit card, she said: ‘The items had been in a bag. They were a joke present for a friend.’

Presiding magistrate Val Khambatta said during the hearing: ‘The village of Salhouse is not coming out of this very well.

‘I think there is provocation on both sides. I think it has to stop and we don’t want to see any side back in court.

He told Radley: ‘You need to take this on board. What you did was not very sensible. The other side needs to take on board how things get out of hand very quickly.’

A Crown Prosecution Service spokesperson said: ‘As in every case, both the evidential test and public interest test must be passed for a prosecution to continue.

‘After careful consultation with both the police and the complainant, the decision was taken that the public interest test was no longer met in proceeding and that we would not oppose the appeal in the Crown Court.

‘We have provided the complainant a full explanation of our decision making process in this case.’

Miss Radley who is a yoga teacher, said today: ‘This case was a massive waste of Police time, taxpayers money a drain on public resources and the court system.’

Talking about her dispute with the Mr and Mrs Nudd and her successful appeal, she said: ‘This has caused my family, friends and me five years of stress, anxiety and money.

‘I have been labeled and ridiculed in the press and online. I am over the moon and thank all those people that stood by me during these difficult times. ‘

Mrs Nudd has so far not responded to a request for comment.