Former East 17 star Brian Harvey, 44, is arrested on suspicion of sending malicious communications after reports of a man threatening to harm himself at an east-London property

Scotland Yard said they were called to an address in Walthamstow, east London, on Thursday following reports a man was threatening to harm himself.

It came after a troubling livestream video he posted which reported that in the video, Brian described his financial troubles and asked for a meeting with Prime Minister Theresa May.

It sparked concern for his welfare and police attended the scene at his house in Walthamstow.

The former EastEnders star, 45, who used to date the East 17 singer, tweeted: ‘I’m in rehab just come out of a aa meeting been hospital all day myself I really hope this is a hoax as if it’s not my heart will be broken…

‘Brian is a good good man and if this is true I hope he gets the help he needs ., please dm me…

‘Please if anyone has any news on Brian Harvey contact me thanks x my prayers heart and thoughts are with him x I pray his ok x.’

Upon arriving, officers performed a welfare check and a man in his 40s was arrested, police said.

Following a physical examination by a doctor where he was deemed fit, Harvey, 44, was taken into police custody.

He did not suffer any injuries, according to police.

Last year the former popstar, who has been open about his battles with depression, sparked concern by posting a video in which he claimed he had not left the house in five years.

He said: ‘I’ve been a prisoner in my own home now for about five years. Four to five years.

‘I’ve got to be trapped, like a prisoner, in my own home after selling 22million records. I’ve never done nothing to no one. I just chose not to get involved.’ 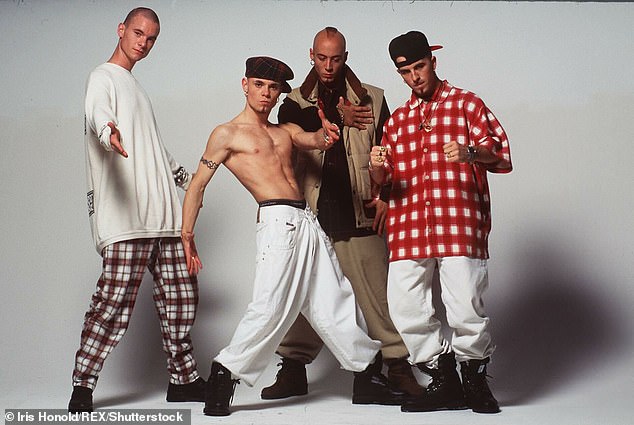 The boy band sold millions of records and scored several top 10 hits, including 1994 Christmas number one Stay Another Day.

Harvey was left with severe injuries in 2005 following an accident in which he ran over himself.