The former head of the U.S. Food and Drug Administration (FDA) is predicting that the most recent wave of COVID-19 cases will peak in late summer.

In an appearance on CNBC’s Squawk Box on Thursday morning, Dr Scott Gottlieb said the spread of the Indian ‘Delta’ variant was going to cause infections to keep rising for the next few months.

‘The bottom line is we’re going to see continued growth at least for the next three or four weeks. There’s going to be a peak probably sometime around late August or early September,’ he said.

‘It’s possible you’ll see a second small bump as kids go back to school and schools become vectors of transmission like we saw with [the Kent ‘Alpha’ variant], but this will come and go.’

Every single state and the District of Columbia is reporting either infections rising or holding steady in the last week, according to a DailyMail.com analysis of Johns Hopkins data.

Additionally, 333 COVID-19 deaths were recorded on Wednesday with a seven-day rolling average of 264.

Fatalities, which are a lagging indicator, have not dramatically risen but instead have slightly increased by 10 percent from the average of 238 recorded three weeks prior.

Health officials say this is because people now are protected by vaccines, though in states that have less vaccine uptake – such as Alabama, Florida,  Louisiana, and Missouri – hospitals are starting to fill up.

In fact, some medical centers say they are seeing the number of patients admitted meet or exceed the number seen in the spring or summer while others are so full they are turning patients away.

However, despite the spread of the Delta variant, the Centers for Disease Control and Prevention (CDC) and the White House refused to say whether they were reconsidering mask guidance for fully vaccinated Americans.

‘We are always looking at the data as the data come in. Our guidance has been clear since we put it out several months ago and that is if you are unvaccinated, you should continue to wear a mask and protect yourself and those around you,’ said CDC director Dr Rochelle Walensky at a press briefing on Thursday.

‘We have always said that local communities have to look at what is going on locally. In areas that have a high amount of disease and low amounts of vaccination…if you’re vaccinated, you have exceptional levels of protection from that vaccine and you may choose to add an extra level of protection by putting on your mask and that is an individual choice.’ 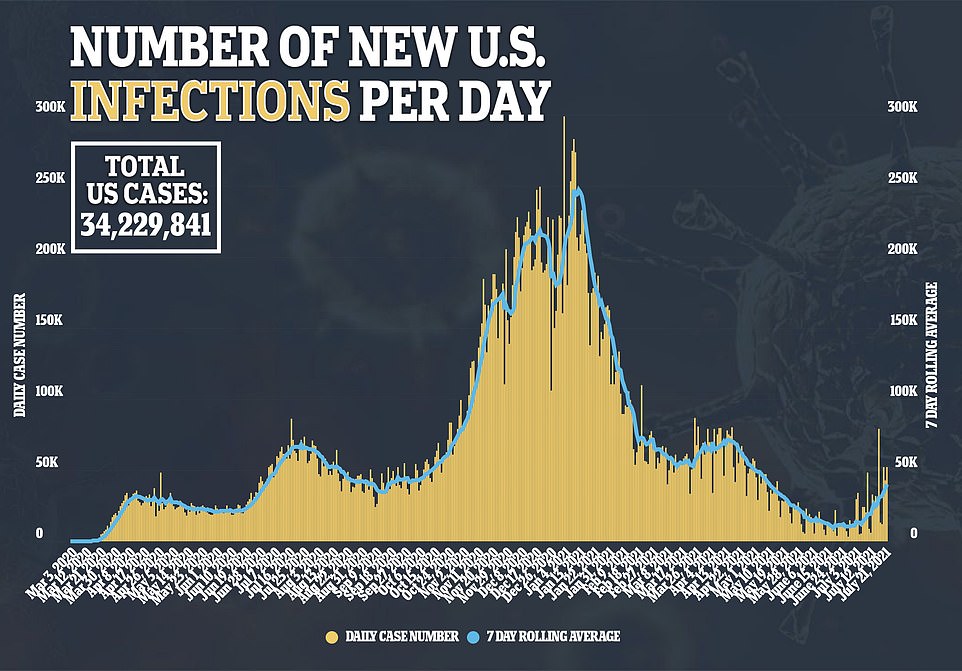 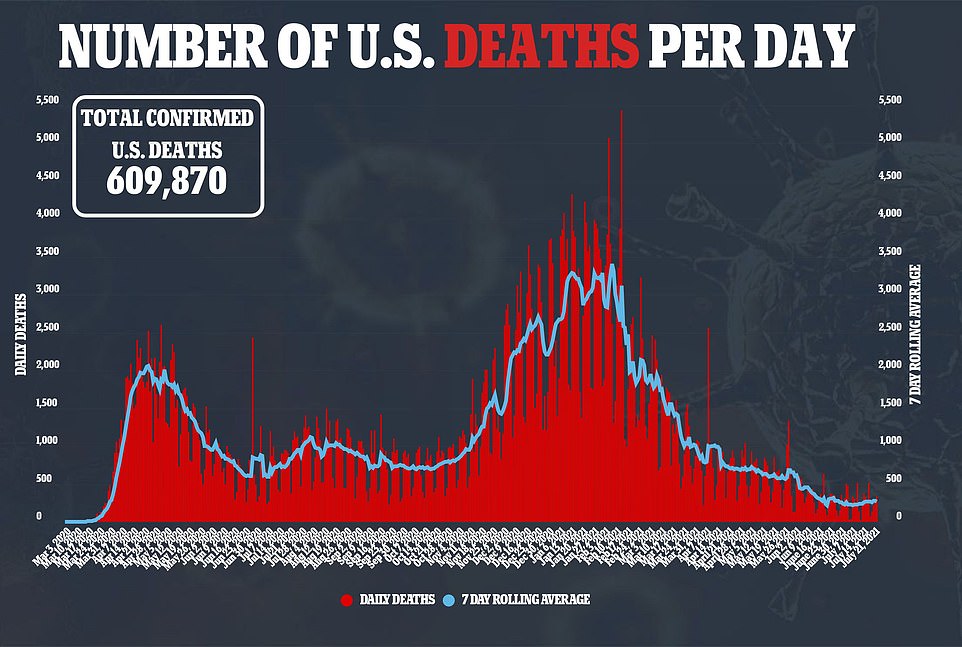 Deaths have continued to remain relatively flat with 333 recorded on Wednesday and a seven-day rolling average of 264, 10% up from the average of 238 recorded three weeks prior

“There’s going to be a peak sometime around late August, early September,” says @ScottGottliebMD. “This will come and go. For businesses that want to reopen against the backdrop of a more quiescent period of time October might be prudent.” pic.twitter.com/mKKhgMzEn7

Missouri continues to be one of the nation’s COVID-19 epicenters with average cases rising by 29 percent from 1,441 per day to 1,862 per day in the last two weeks, according to DailyMail.com’s analysis.

The state’s vaccination rate is behind the national average with about 46.5 percent of residents having received at least one dose and 40.4 percent fully vaccinated.

Comparatively, 56.1 percent of the U.S. has received at least one dose and 48.6 percent are fully vaccinated.

Additionally, hospitalizations have risen across the state to 1,534 from 1,119 14 days prior.

The surge is due to the Delta variant, which has taken hold in the southwestern part of the state, such as Branson and Springfield, where rates of at least one vaccine dose in some counties are as low as 15 percent.

At Mercy Springfield, officials say they are opening a sixth COVID-19 inpatient unit and a third COVID-19 intensive care unit in an effort to care for the swell of patients being treated.

The hospital is currently treating 146 patients infected with the virus, xx percent up from 120 two weeks ago, according to a tweet written by Dr Erik Frederick, the chief administrative officer on Wednesday.

But the surge is not just in rural areas. Hospital in the Kansas City metro  region say they have had to turn down patients trying to transfer from other hospitals because they have no more available beds.

‘I think we’re at a tipping point,’ said Dr Steve Stites, chief medical officer for the University of Kansas Health System, during a press briefing on Wednesday

‘If we don’t take it seriously, we could easily end up back where we were in November.’

Stites said his hospital has been turning down between one and six patients every day because, otherwise, the hospital would be treating more than 100 patients. 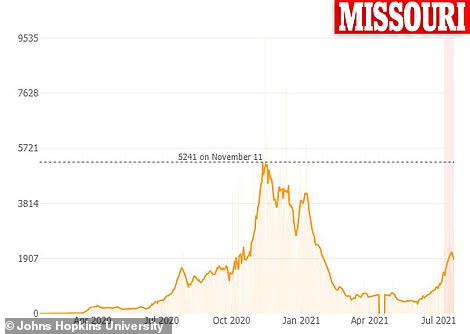 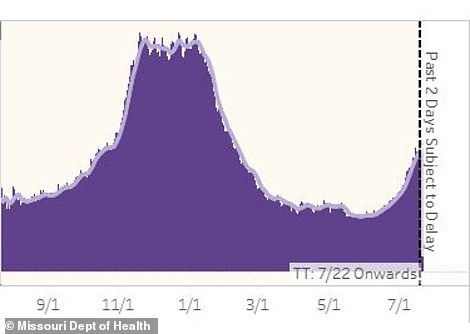 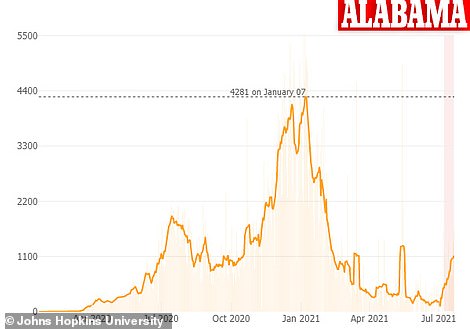 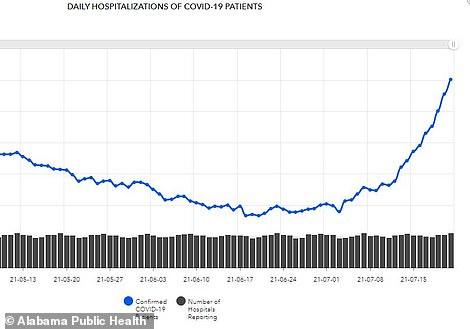 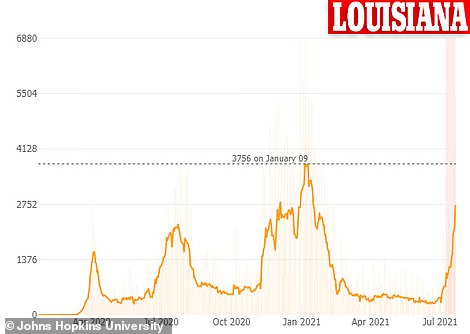 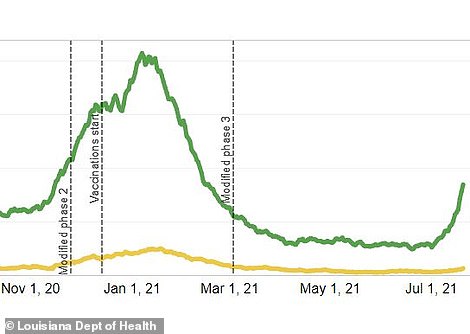 In Louisiana, cases have increased from 714 to 2,734, a 282% spike from two weeks ago (left). Hospitalizations have risen to 844, which is the highest level seen since February

‘We are turning down transfers, which is creating, I think, a real concern, maybe even a crisis here in our region because patients are having trouble landing into beds anywhere near their hometown,’ he said.

In nearby Alabama, COVID-19 cases are also rising. The average number of cases have increased to 1,116, a 282% jump from the 472 cases reported two weeks ago, the DailyMail.com analysis found.

Additionally, hospitalizations has more than doubled from 256 to 602 in the last two weeks, according to the Alabama Department of Public Health.

Doctors say that the majority of patients they are seeing are younger.

‘We do know that in our ICUs, we are seeing younger people intubated who are very sick or who are on the floors and are very sick,’ Dr Jeanne Marrazzo, a professor of infectious diseases at the University of Alabama at Birmingham, told CNN.

‘That should be a gigantic wake-up call.’

Alabama has one of the lowest vaccination rates in the country with just xx percent receiving at least one dose of the COVID-19 vaccine, CDC data show.

Dr Brtyney Cobia, a hospitalist at Grandview Medical Center in Birmingham, wrote in a Facebook post on Sunday that many young healthy patients are being admitted to her hospital too, seriously ill and regretful of not being vaccinated.

‘One of the last things they do before they’re intubated is beg me for the vaccine. I hold their hand and tell them that I’m sorry, but it’s too late,’ she wrote.

‘A few days later when I call time of death, I hug their family members and I tell them the best way to honor their loved one is to go get vaccinated and encourage everyone they know to do the same.’

She told AL.com that of the patients she is treating right now, all but one did not get the vaccine. The vaccinated patient just needed oxygen therapy and is expected to make a full recovery but the future is unclear for her unvaccinated patients. 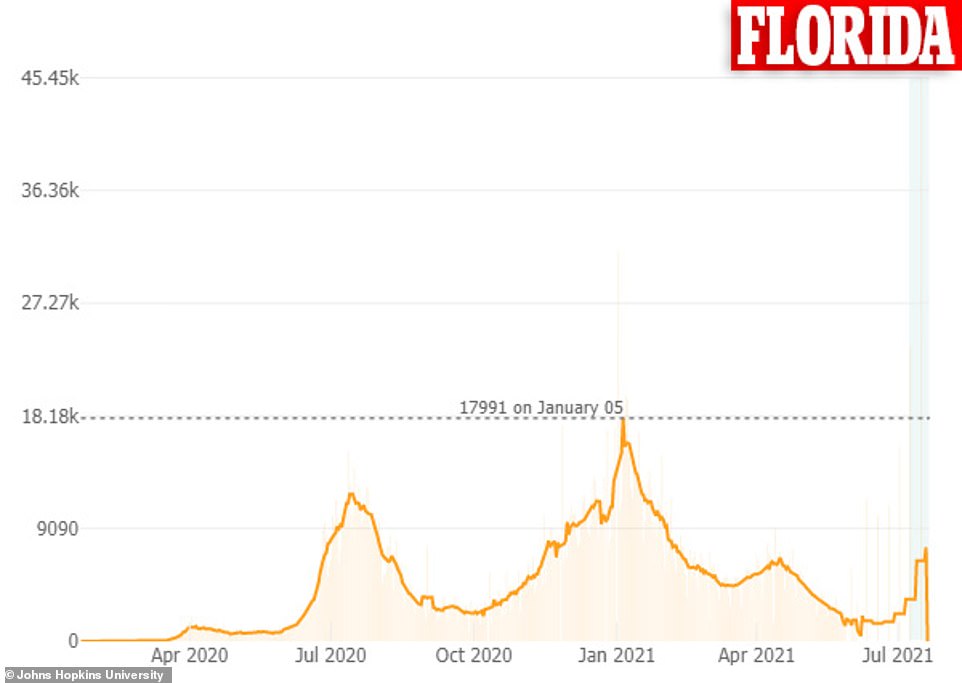 Florida is recording about 7,000 cases per day and accounts for one in five of all weekly cases recorded in the U.S 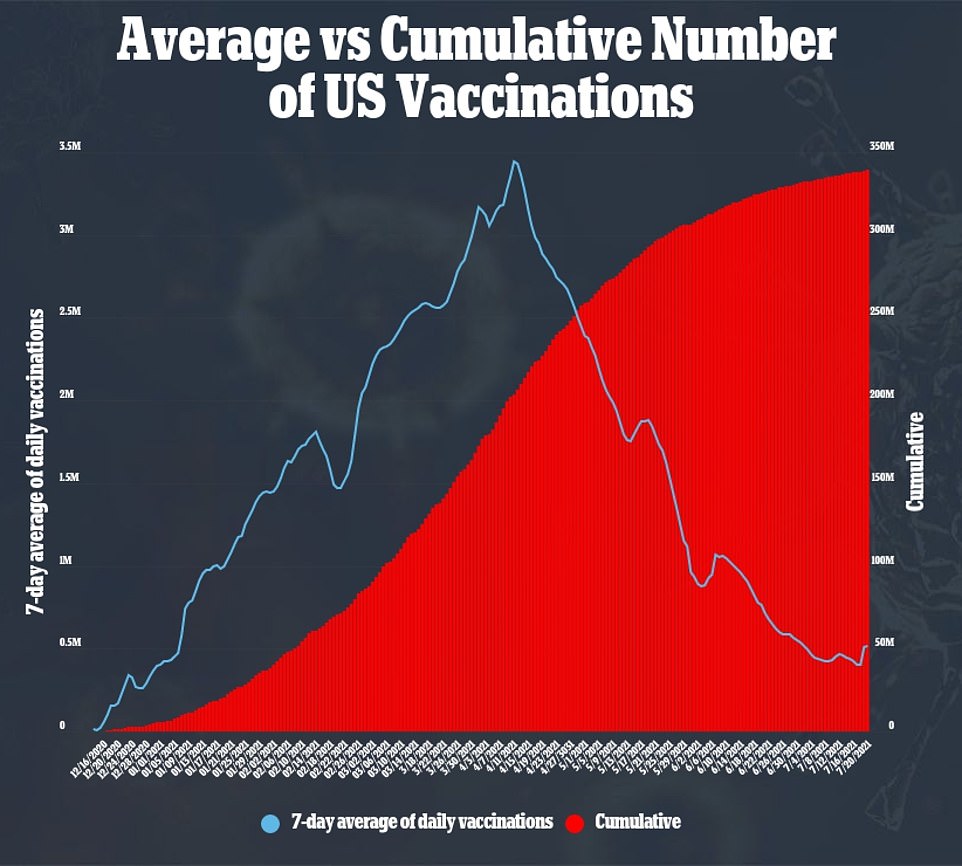 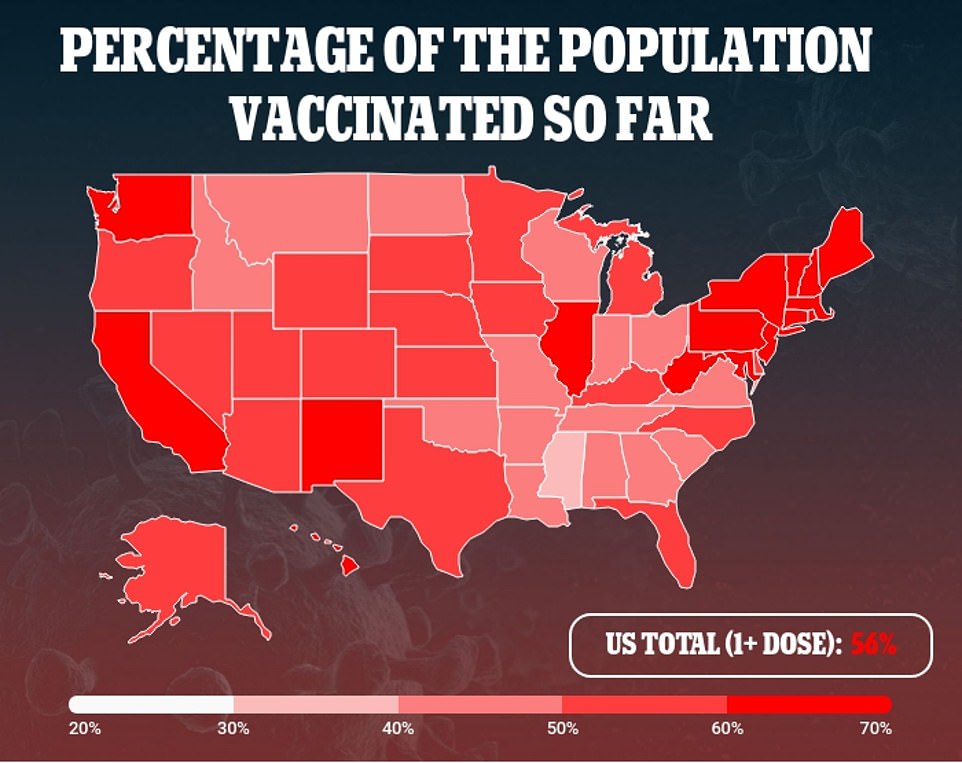 Florida is also seeing a rise in cases. Jeff Zients, White House COVID-19 Response Coordinator, said during a press briefing on Thursday that the state accounts for one in five of all weekly cases recorded in the U.S.

Dr Chad Neilsen, director of infection prevention at the University of Florida Health in Jacksonville, told ABC News that the system has already surpassed the record of daily COVID-19 patients across its two campuses.

The previous record of 125 was set in January. Now, there are 136 people hospitalized, up from 75 patients last week and 45 the week prior.

”We knew it was most likely due to the Delta variant taking a bigger footprint here in the Northeast Florida region because it was so rapid of an increase,’ Nielsen told ABC News.

‘Everybody in town is suffering the same fate we are.’

Nielsen told CNN that 90 percent of the hospital’s COVID-19 patients are not vaccinated.

‘We could be an entire hospital full of Covid in a matter of a month if things don’t begin to slow down or vaccinations don’t increase,’ Neilsen said.

‘We need policymakers at a higher level though to really listen to us. Start doubling down on vaccinations pushes, stop with disinformation campaigns on social media. And really start helping the health care community because we are starting to reach a breaking point across the state.’ 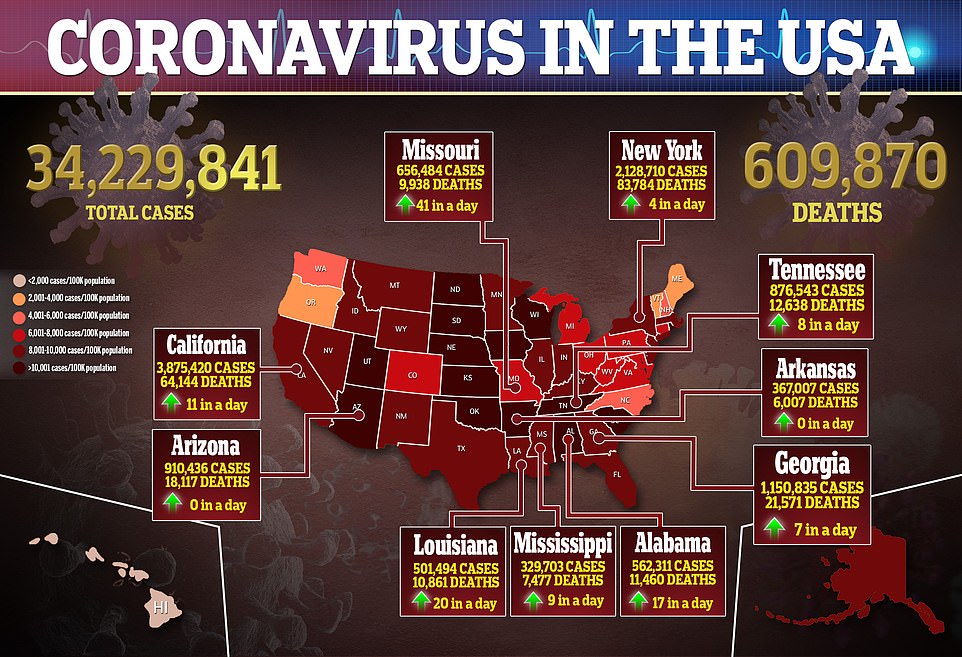