So Brussels is determined to play hardball. That’s not necessarily a bad thing. If it means we can now press on and deliver a real Brexit, all well and good. As Theresa May has said many times, no deal is better than a bad deal – and what the EU is trying to bully us into is very much a bad deal.

However, nothing in these talks is ever straightforward. The complete derailment of Brexit is still a real possibility and it is an outcome some of Britain’s own negotiators, led by Olly Robbins, may be unwittingly assisting. Worse than that, those same negotiators may be dangerously close to winning the Prime Minister’s approval.

It’s why Tory MPs who are determined to honour the result of the 2016 referendum must now warn Mrs May that we could never support that outcome in the Commons.

Theresa May has said many times, no deal is better than a bad deal when it comes to Brexit

According to reports, EU negotiators have spurned all our proposals to avoid a hard border in Ireland. Those included a ‘customs partnership’ dreamt up by British officials to solve the impasse and ensure Mrs May keeps her promise to stay out of the customs union. The ingenious plan goes like this: the UK would indeed quit the customs union and be able to sign post-Brexit free-trade deals with countries around the globe.

As the Leave side promised in the referendum campaign, we would be free to set our own, lower tariffs on imports. But to avoid a hard Irish border, the UK would take on the role of the EU’s tax collector.

We would impose the full tariffs on products destined for the Continent and pass the money on to Brussels. Importers of goods staying in the UK would receive a rebate. Et voilà! No need for customs posts in Ireland and full steam ahead for post-Brexit free-trade deals. 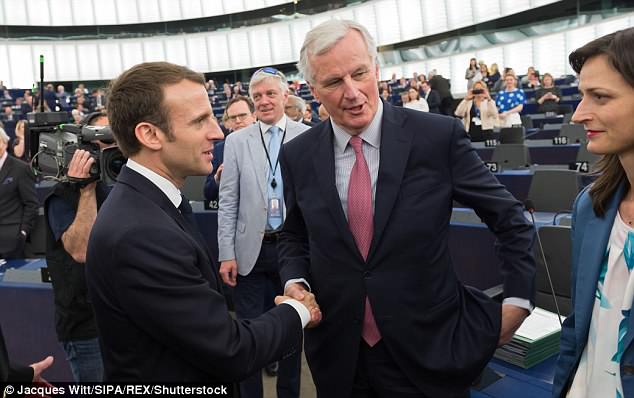 But sadly, this is nothing more than a Byzantine scheme designed first to slow down Brexit and then to strangle it.

Some of the people proposing it know such an immensely complicated – and untried – arrangement is guaranteed to end in chaotic failure. At which point, they will conclude we have no choice but to rejoin the fully fledged EU customs union, with its inflexible tariffs, all overseen by the European Court of Justice.

Bang goes our independent trade policy and with it our independence. In effect, bang goes Brexit. We would no longer be members of the EU but in name only. There were reports last week that the EU has rejected the Irish border proposal. But in my view, and that of many fellow Conservative MPs, it is merely a negotiating ploy.

I suspect that Brexit Secretary David Davis’s wily Brussels counterpart, Michel Barnier, is simply preparing the ground for a grand ‘compromise’ in which, ever so reluctantly, the EU signs up to something it apparently did not want.

It is all part of the tortuous negotiation dance, a baroque ballet to befuddle the Brexiteers.

I tell the Prime Minister today that such a con trick on the British people cannot be countenanced.

I speak for many Tory MPs when I say that whatever the consequences, we could never vote for it. Far better for Britain simply to go – to leave the EU on open, honest terms.