A Playboy model battling a terminal brain cancer claims using medicinal marijuana has shrunk her tumour – and she hopes to be free of the disease in less than three months’ time.

Kerri Parker, 34, from Norwich, says her recent scans reveal she’s ‘shrunk’ half of her cancer and she feels her brain is the ‘best it’s ever been’.

The former Ms Europe and Miss UK is now preparing to jet to the Bahamas in two weeks’ time to compete in Ms World, which she previously thought would be her last ever pageant.

Having lost two stone and dropped to a UK size zero in a month while the cannabis ‘purged’ her body of cancer, Kerri said she’s having to munch on a McDonalds a day to gain weight to fit into her size six outfits.

She told FEMAIL: ‘I thought brain cancer would kill me, but now it’s not going to. Now I finally have a life – Ms World’s not my last pageant.

‘I’ve proven them all wrong; doctors here told me cannabis doesn’t cure cancer and that it’ll kill me, they actually told me it would make it worse and that it only works in kids.

‘They scared me so much I was ready to sign my life and career away to have chemo and radiotherapy, but not now.

‘If I can shrink half my brain of cancer, I’ll shrink the other half. I’ll shrink it down so there’s not a single cell left that can ever replicate.’

Kerri, who used to spend her time partying at Hugh Hefner’s Playboy mansion in LA and has a black belt in martial arts, was first diagnosed with brain cancer in 2013, and underwent life-saving surgery to have the tumour removed. 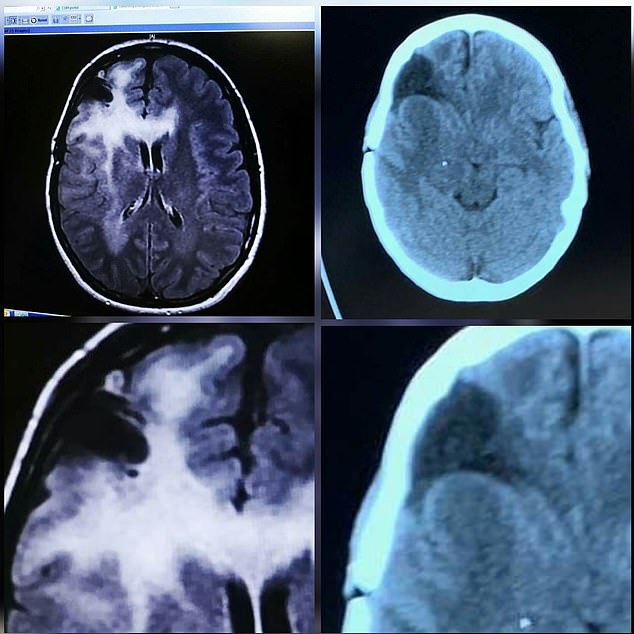 Kerri says her recent scans reveal she’s ‘shrunk’ half of her cancer and now feels her brain is the ‘best it’s ever been’. Pictured left: a MRI scan shows cancer is in three lobes and very aggressive. Pictured right: Kerri’s recent CT scan after 70 days of Rick Simpson oil (RSO), a cannabis oil product 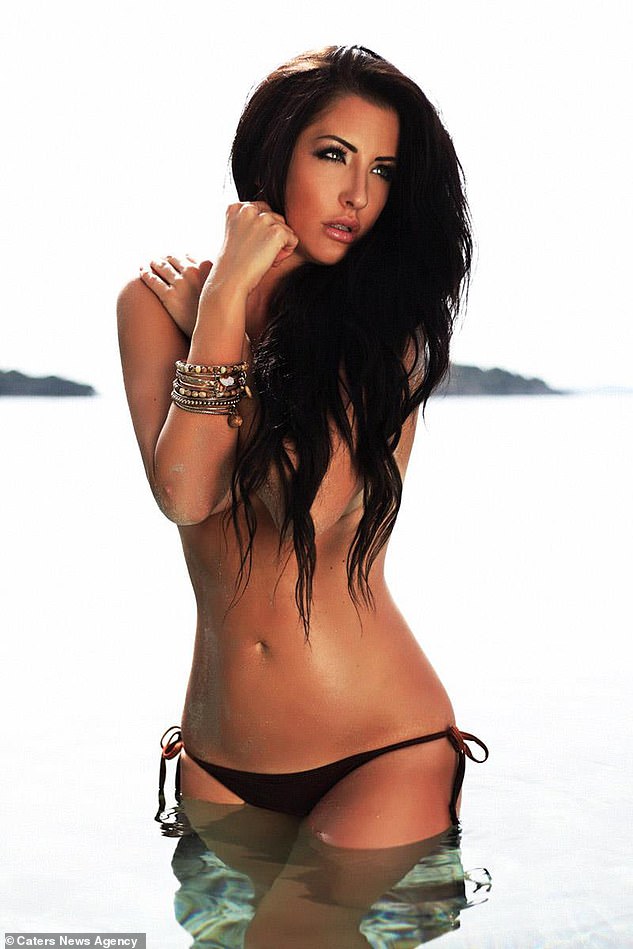 Former Playboy Bunny Kerri (pictured in a modelling shoot last year) was first diagnosed with brain cancer in 2013, and underwent life-saving surgery to have the tumour removed

But in September last year the qualified stunt artist was told her cancer had returned, with doctors urging her to have chemotherapy and radiotherapy.

According to Cancer Research UK, there isn’t enough reliable evidence yet to prove that any form of cannabis can effectively treat cancer in patients – including hemp oil, cannabis oil or the active chemicals found within the cannabis plant (cannabinoids).

But Kerri refused traditional treatment in favour of using cannabis oil from the US and changing her diet, as she was put off by the ‘horrible’ side effects and couldn’t face losing her hair.

She said a recent CT scan showed ‘visible shrinkage’ since using the drug, and rather than have chemo and radiotherapy in September, she has opted for another scan in three months’ time instead.

‘It’s a visible difference, it’s only now showing in half of my brain when before it was nearly three quarters,’ she explained. 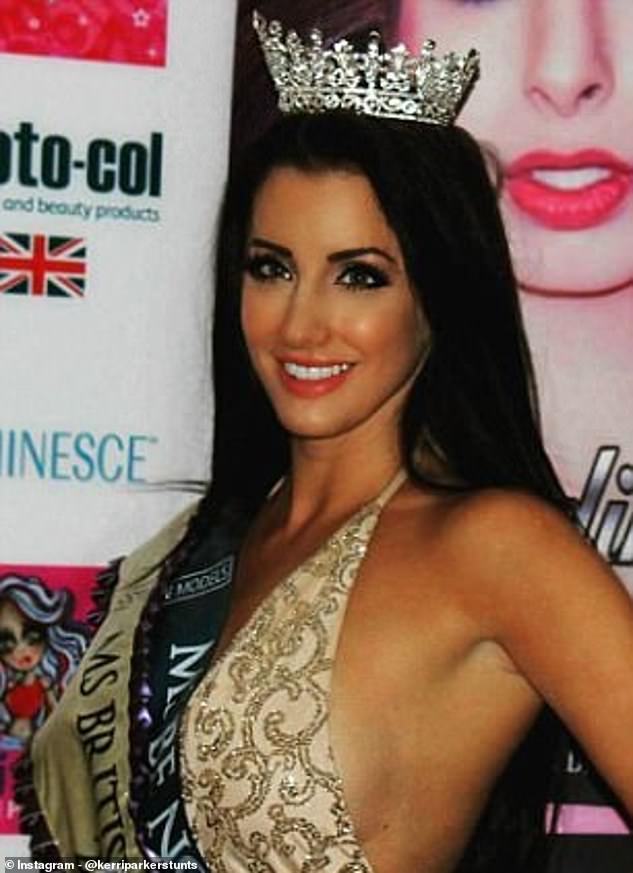 Kerri, pictured in her beauty queen years, is using cannabis oil to treat her brain cancer, after refusing to have chemotherapy 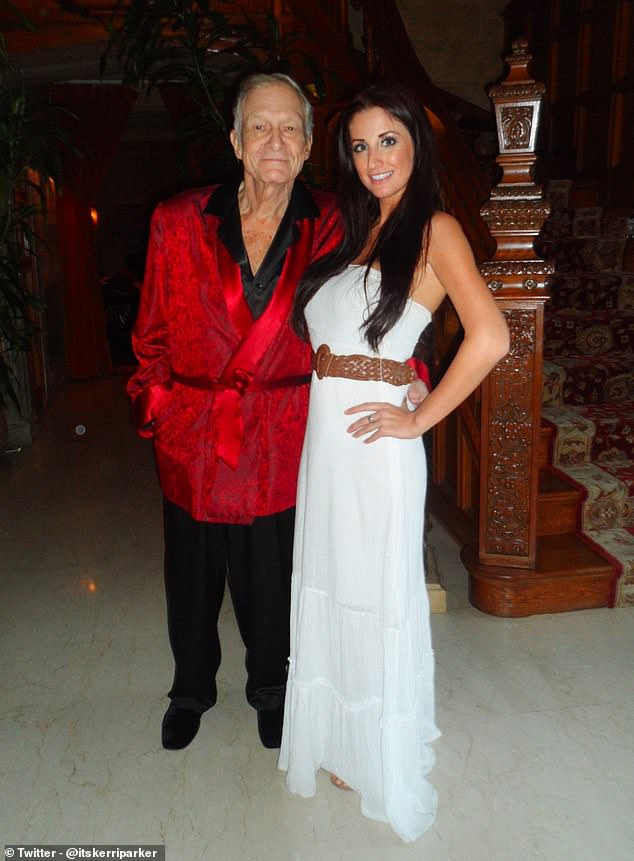 Prior to her cancer, Kerri used to spend her time partying at Hugh Hefner’s Playboy mansion in LA (pictured with him in 2012)

‘Specialists in America are telling me it’s shrunk. The reality is, I just cured terminal cancer, I’m actually going to give myself a life.

‘It’s disgusting that they’re keeping it from people over here, I’ve lost people to cancer and I didn’t need to.’

Kerri said the way the Rick Simpson cannabis oil (RSO) – which contains high levels of tetrahydrocannabinol (THC) – has eased her symptoms is ‘incredible’.

‘Doctors in America said I should have seizures because of how much cancer is in my brain, but they said the cannabis would have prevented that,’ she explained.

‘I’ve enjoyed quality of life. I still have a driving licence – I would have lost it if I’d had a seizure. 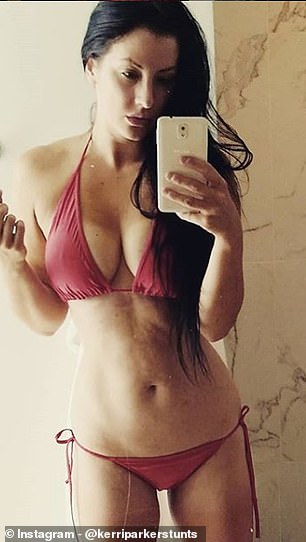 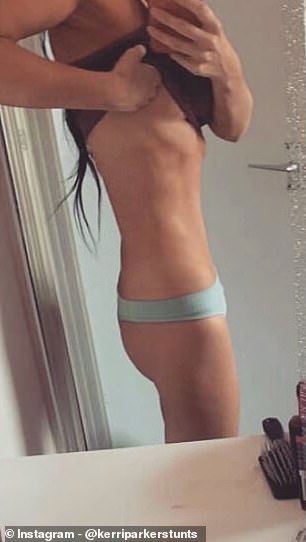 Kerri, pictured left in March and right earlier this month, said she is now desperately trying to put on weight by eating a McDonald’s a day 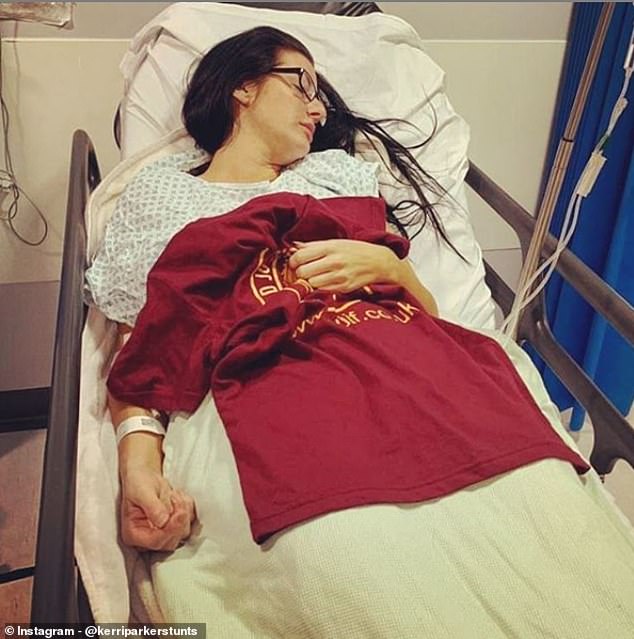 The model and stunt artist, who used to spend her time partying at Hugh Hefner’s Playboy mansion in LA and has a black belt in martial arts, said the way the medicinal marijuana has eased her symptoms is ‘incredible’. Pictured in hospital in June

‘I’ve never had any pain with my cancer. I’ve been training, I got my black belt, I got my rock climbing instructor course done. None of this I’d have been able to do.

‘You have to have the mindset, diet, everything – it’s not just smoking a couple of joints. It’s not an easy route.

‘I never knew I could get up to a gram a day – my mum would take a couple of drops and pass out on the spot. I was taking a thousand times that, I never thought my little body could get to those levels, and now I take it with ease. My tolerance is more than anyone I’ve ever met and I’ve never taken drugs in my life.’ 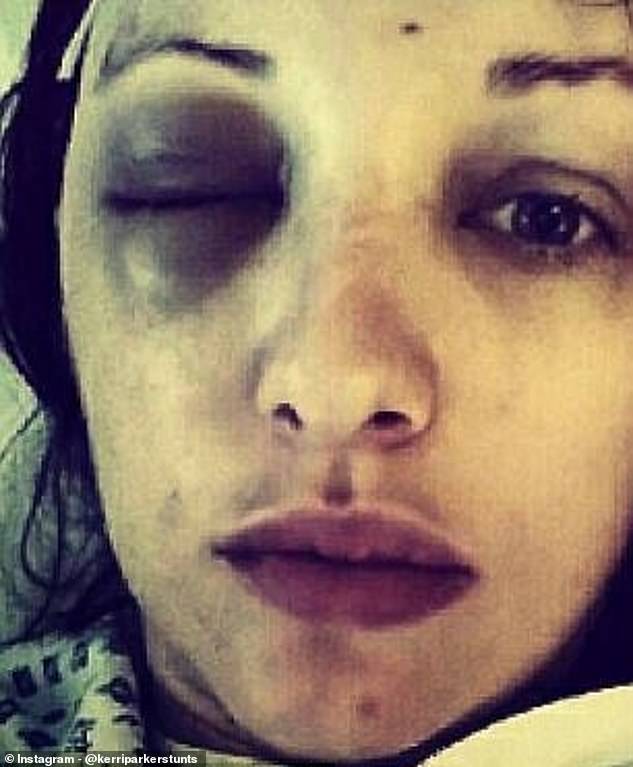 Since she began taking her 90-day course of medicinal marijuana, Kerri said her brain has ‘cleared up’.

‘My maths is incredible, my recall, my creativity – I’m listening to music, I’ve never listened to music before. I’ve never loved art before, but things are becoming new in my brain which have enlightened me to think maybe I am shrinking this,’ she said.

‘The doctors are like, “No no no this is impossible”. They said to me I should have bad recall, but I sat for several hours having tests in intelligence and recall and I passed above a normal healthy brain. 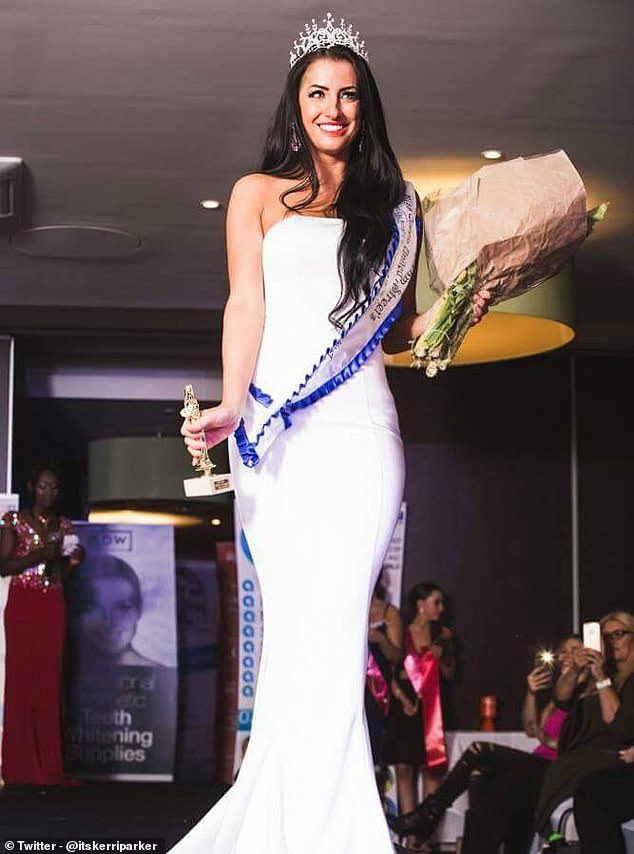 Kerri, pictured after winning Miss UK in 2016, now feels like Ms World next month is no longer her last ever pageant 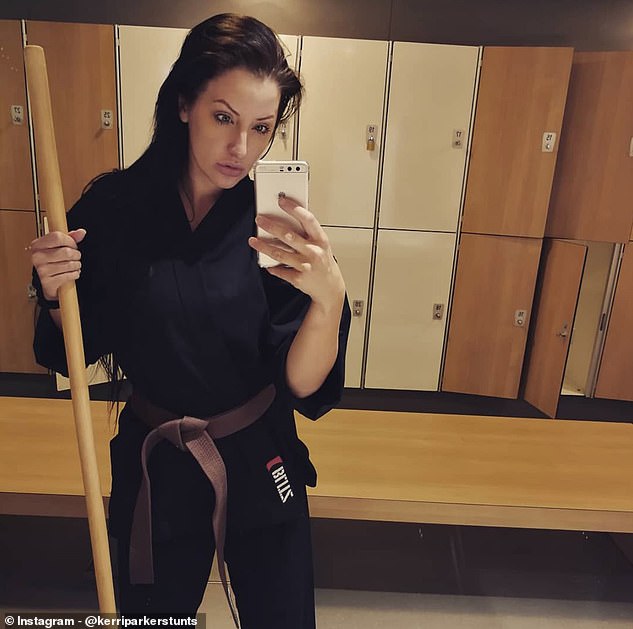 Kerri (pictured last year in a martial arts gear) has a black belt in martial arts and works as a stunt artist, but was told to get a new career at 35 when she faced chemo and radio therapy

‘I said to them, “You can’t tell me that I’m dying and that there’s something wrong with this brain, this is the best brain I’ve never known, my intelligence is off the scale, and I know it’s because I’m training it”.

‘But is it also because I’ve lived the last few years with three quarters of my brain full of edema, full of swelling containing cancer which formed a tumour last year.

‘I wasn’t stupid or confused or forgetful, I just had none of my brain left, and now my brain feels remarkable. I feel like me again.’ 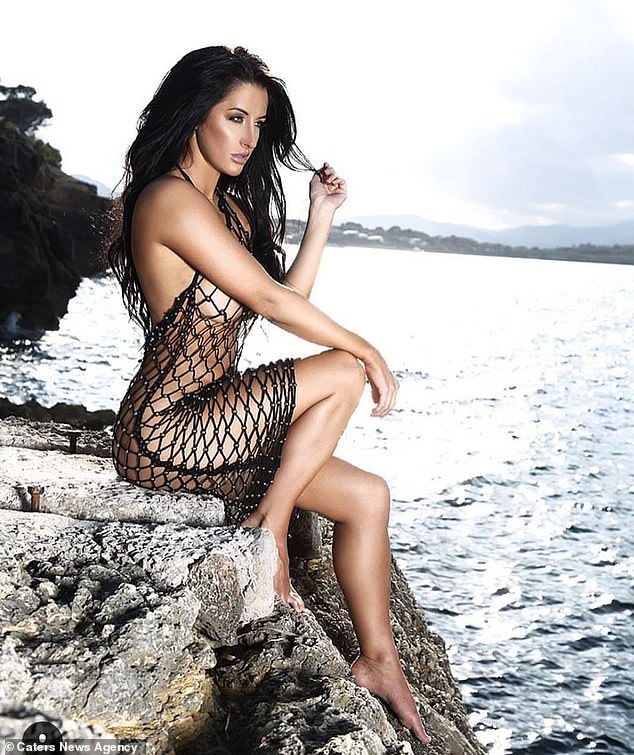 Kerri (pictured in a modelling shoot last year) was crowned Miss Europe earlier this year, having won Miss UK a number of times over the past decade, and she is due to compete in Ms World in the Bahamas next month

Kerri added that due to the fact her tumour is so deep in her brain, radiotherapy would have caused her to lose her speech, memory, recall and ability to read and write.

What is the medicinal value of cannabis?

The cannabis plant produces a resin that contains various substances. Some of these may have medicinal value and are known as cannabinoids.

Two main cannabinoids have been identified – delta-9-tetrahydrocannabidiol (THC), which is illegal to use in the UK, and cannabidiol (CBD), which is legal.

There are some drugs available that are derived from cannabis, for example Sativex, used for multiple sclerosis and Nabilone, used sometimes for sickness caused by chemotherapy.

Delta-9-tetrahydrocannabidiol and cannabidiol have been studied to see if they could have any role in the treatment of cancer. Scientists have found that different cannabinoids can cause a cell to divide and stop cells from dividing and developing new blood vessels.

But they have also found that cannabinoids can damage important blood vessels and in some situations, encourage cancer cells to grow.

‘I was told to get a new career at 35, but my stunt dream has cost me up to tens of thousands in training fees over 25 years, it’s like becoming a surgeon,’ she explained.

Two weeks ago Kerri told how she was struggling to eat or drink and vomitting bile, which baffled doctors as they couldn’t determine the cause.

‘I have a medical background and I was looking at the stats thinking, my body has never been so healthy!’ Kerri said.

‘But the specialists in America said this was cannabis purging my system, clearing the cancer out of my body.’

Kerri was crowned Miss Europe earlier this year, having won Miss UK a number of times over the past decade, and she is due to compete in Ms World in the Bahamas next month.

‘Now I’m eating again – I was so skinny and no dresses would fit me, and now the gown I’ve chosen is three sizes too big and I’m trying to eat a little McDonalds each day to put some weight on as opposed to my normal bodybuilder shred,’ she said.

‘I thought it was going to be my last pageant and to me that’s too much pressure to win. If you’d have asked me two weeks ago I didn’t think I’d be on that stage, I wasn’t prepared, I was so ill.

‘Now I’ve got two weeks to prepare, but I feel so confident I’m going to be on that stage a winner now, regardless of what happens.’ 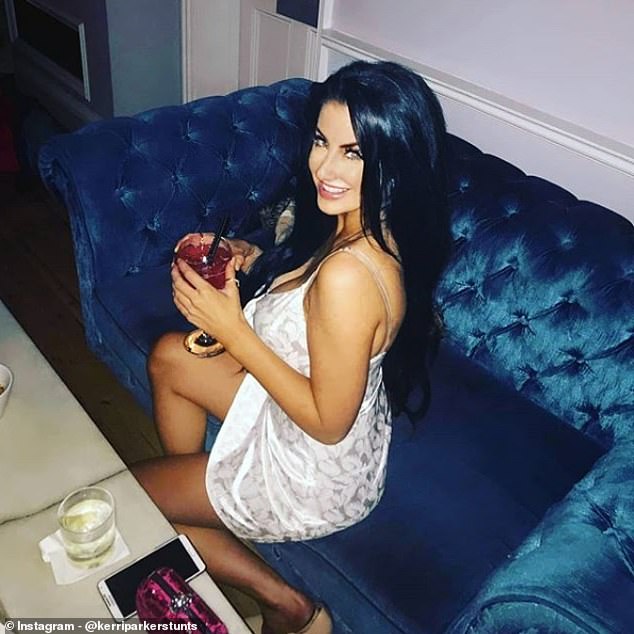 Kerri said she feels confident she’s going to be on that stage a winner now, regardless of what happens