Former President George H.W. Bush is OUT of the ICU

Former President George H.W. Bush has been moved out of the intensive care unit, his spokesman announced on Wednesday.

The 93-year-old was admitted to Houston Methodist Hospital on Sunday, for an infection that had spread to his lungs, a day after he attended the funeral of his wife Barbara.

On Wednesday, his spokesman Jim McGrath issued a statement, announcing that the 41st president had been moved out of the ICU and into a regular patient room where he ‘is expected to continue his recovery there for several more days’.

‘He is alert and talking with hospital staff, family and friends, and his doctors are very pleased with his progress,’ the statement reads.

Bush went on to thank everyone for their thoughts and crack a joke while he was at it.

‘President Bush naturally thanks everyone for their prayers and good wishes. He also wants to assure everyone that, as good as he feels now, he is more focused on the Houston Rockets closing out their playoff series against the Minnesota Timberwolves than anything that landed him in the hospital,’ the statement reads.

Also on Wednesday, Bush himself tweeted his thanks to everyone who helped with his wife’s funeral.

The former first lady died at the age of 92 on April 17 and was laid to rest at the George H.W. Bush Presidential Library in College Station, Texas on Saturday.

Former President George H.W. Bush thanked everyone involved with his late wife’s funeral in a tweet on Wednesday (the former president pictured above at the funeral on Saturday) 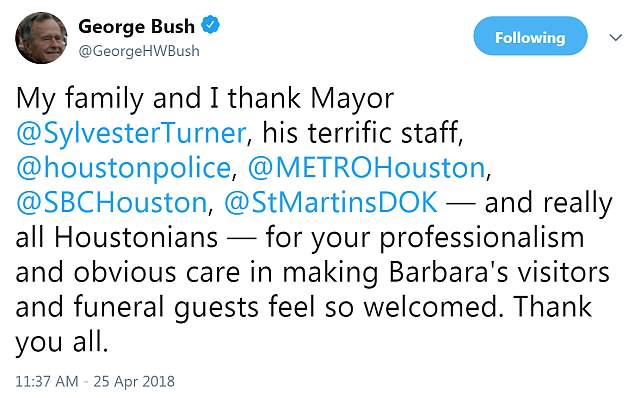 Bush has been in the hospital since his wife’s funeral, after getting an infection. His Wednesday tweet is pictured above 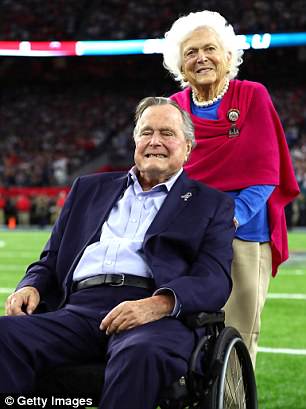 The Bushes were married longer than any other presidential couple. They are pictured attending the Super Bowl in February 2017

On Monday, McGrath gave an update on Bush’s condition, saying he was on the road to recovery.

‘President Bush was admitted to Houston Methodist Hospital yesterday morning after contracting an infection that spread to his blood. He is responding to treatments and appears to be recovering. We will issue additional updates as events warrant,’ spokesman Jim McGrath said in a statement on Monday.

McGrath later added that Bush is eager to get better so that he can travel to his family’s summer home in Kennebunkport, Maine.

‘He’s the most goal-oriented person on this planet,’ McGrath said.

Bush was hospitalized two days after he greeted scores of people who attended his wife’s visitation on Friday, sitting in his wheelchair by her coffin and shaking the hands of all who passed.

Bush has used a wheelchair and an electric scooter for mobility since developing a form of Parkinson’s disease, and has needed hospital treatment several times in recent years for respiratory problems and other infections. 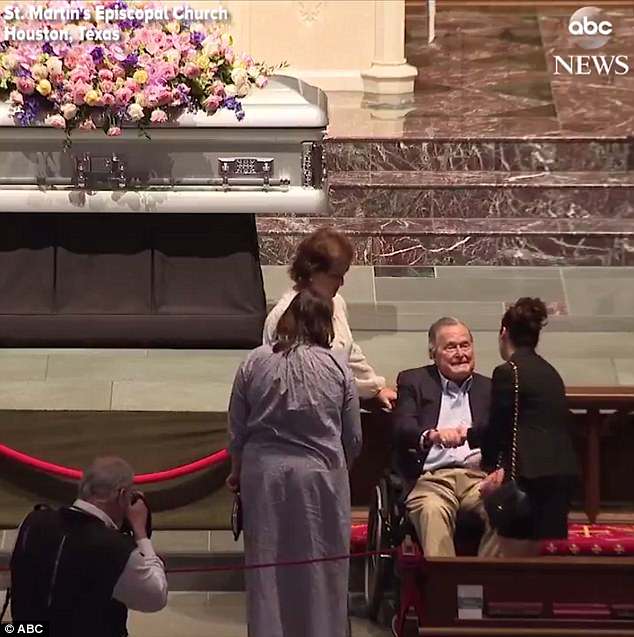 On Friday, Bush greeted many mourners who came to see his wife’s casket in Houston 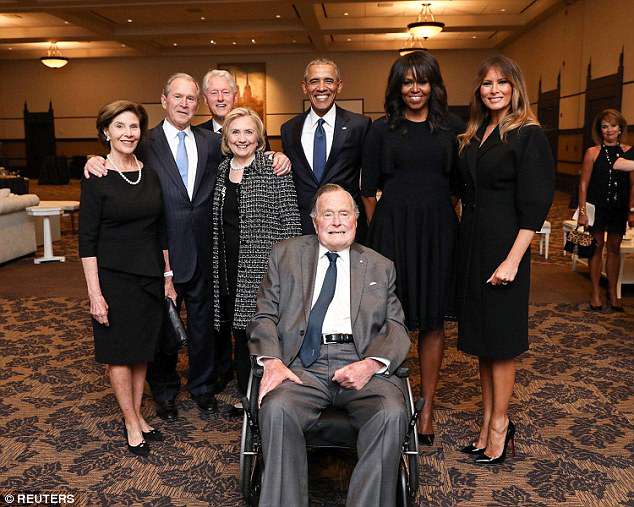 A year ago this month, Bush spent two weeks in the hospital for treatment of pneumonia and chronic bronchitis, a constant irritation of the lining of tubes that carry air to one’s lungs.

His doctors said chronic bronchitis is a condition more prevalent with age and can aggravate the symptoms of pneumonia.

Bush was also hospitalized, for 16 days, in January 2017 for pneumonia. During that hospital stay, which included time in intensive care, doctors inserted a breathing tube and connected him to a ventilator.

He was hospitalized in 2015 in Maine after falling at home and breaking a bone in his neck. In December 2014, he was hospitalized for about a week for shortness of breath, and he spent Christmas 2012 in intensive care for a bronchitis-related cough and other issues.

Bush and his late wife were married for 73 years – longer than any other presidential couple. They met when they were teens, before Bush was sent off to fight in World War II.

Barbara dropped out of Smith College to marry Bush when he came home on leave in 1945. They went on to have six children together, one of whom, Robin, died as a child in 1953 from leukemia. Barbara Bush was buried next to her daughter on Saturday.