REVEALED: The footy past of the tree-hugging eco PEST who terrorised the NRL grand final by invading the pitch – and the meaning of his ‘For the Kids’ slogan

The pitch invader who disrupted the NRL grand final was no stranger to Accor Stadium after it was revealed the man behind the pitch invasion was former Canberra Raider Mark McLinden.

The 165 game former NRL star is now a climate activist and was protesting the use of fossil fuels in his bizarre attempt to rip the goal pads off the posts in the dying stages of the match.

‘A 43-year-old man from Mullumbimby was arrested after he allegedly entered the southern end of the playing field and dragged one of the pads from a goal post,’ a police statement said. 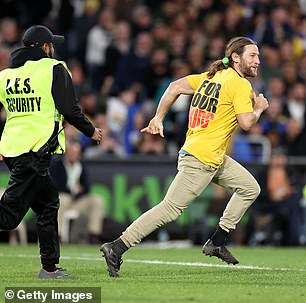 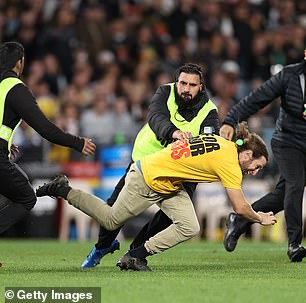 ‘He was removed from the field by security before being arrested by police; he has been issued with an infringement notice for enter competition playing field.’

Mclinden was wearing a shirt that read ‘end coal, gas & oil’ on the front with ‘for our kids’ on the back in a bid to raise awareness of the impacts of fossil fuels on the environment. 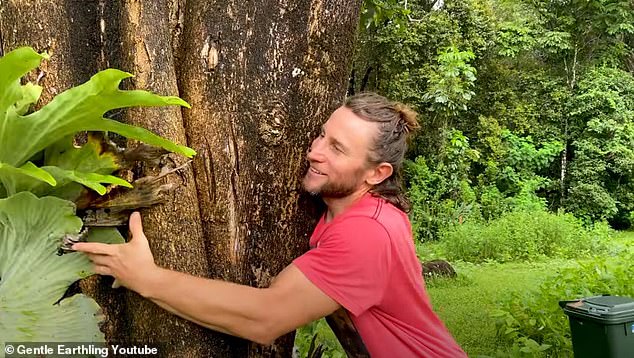 He now faces a fine of up to $5000 and could potentially be banned for life from ever attending another NRL match.

McLinden was signed by the Raiders in 1998 and scored 12 tries in his debut season before going on to be named the NRL’s Rookie of the Year.

He got to play his sole representative game when he represented Country in 2001.

After playing 165 games for the Raiders between 1998 and 2004, McLinden headed over to England where he played four seasons in London before a back injury meant he was released from his contract in his last year.

He made a cross code switch when he signed for the Queensland Reds Super Rugby team in 2009 but his rugby union career was cut short when injury again interrupted him and he only played three games.

After football, McLinden became a personal trainer and stayed in England.

He also used to co-host a bizarre YouTube channel called Marty & Ginski that included odd videos like a staged zombie outbreak on an island and cramming as many people as they could onto a chicken bus in South America to set a world record. 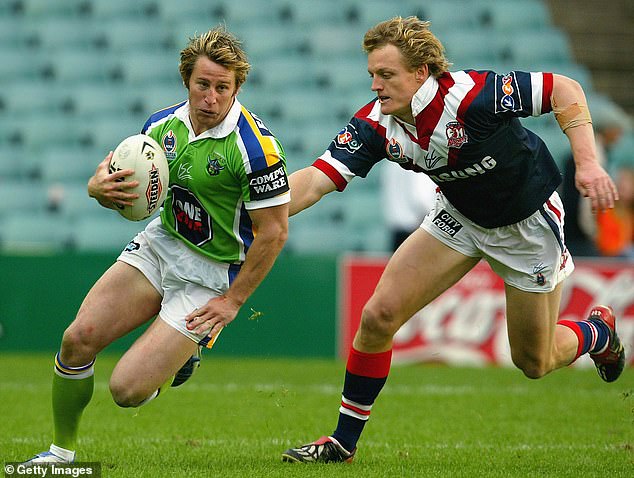 The channel was primarily centered around their travels through South America and Australia promoting a better environment.

Today he is a content creator and has produced videos for climate action groups and artists.

He also has a new YouTube channel called Gentle Earthling which he describes as ‘a page dedicated to the preservation and protection of the natural environment’.

McLinden’s pitch invasion appears to have been pre-meditated, given the shirt he chose to wear and also a Facebook post he set live 30 minutes into the grand final. 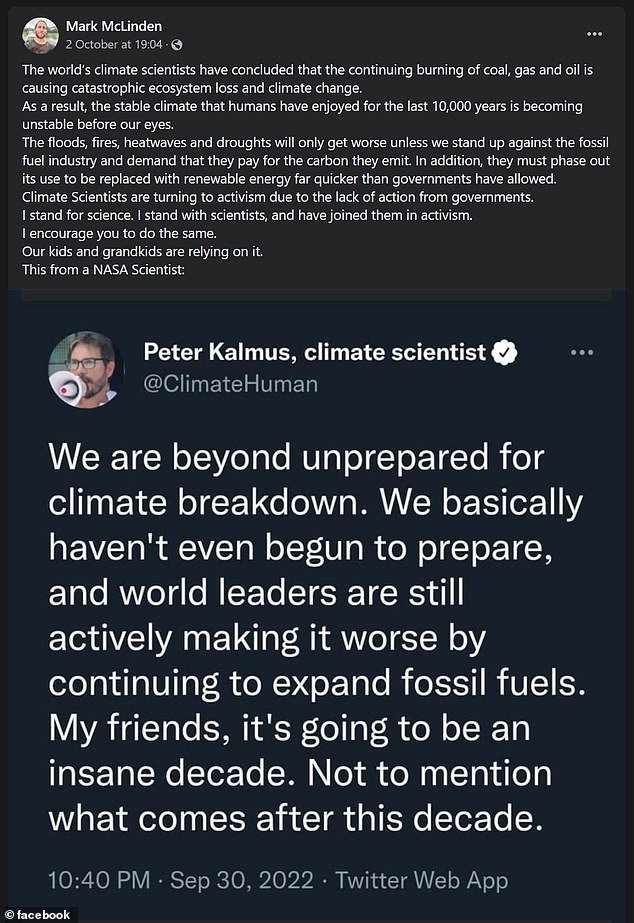 ‘The world’s climate scientists have concluded that the continuing burning of coal, gas and oil is causing catastrophic ecosystem loss and climate change,’ he wrote.

‘As a result, the stable climate that humans have enjoyed for the last 10,000 years is becoming unstable before our eyes. The floods, fires, heatwaves and droughts will only get worse unless we stand up against the fossil fuel industry and demand that they pay for the carbon they emit.

‘In addition, they must phase out its use to be replaced with renewable energy far quicker than governments have allowed.

‘Climate scientists are turning to activism due to the lack of action from governments. I stand for science. I stand with scientists, and have joined them in activism.

‘I encourage you to do the same. Our kids and grandkids are relying on it.