After training as a Royal Lady’s Maid at Buckingham Palace and a career dressing high profile clients around world, including Saudi royalty, Alicia Healey certainly knows her stuff when it comes to looking polished.

Now she’s released a new book of her trade secrets, touching on everything from the etiquette of dressing for formal occasions to tackling issues such as stains and moths.

In Wardrobe Wisdom: How to dress and take care of your clothes, she also reveals her best dressed member of the British royal family, and it’s not who you would expect.

Alicia, who worked for the royal household at Buckingham Palace for four years, told Tatler that rather than Meghan or Kate, it’s Sophie Countess of Wessex who leads in the style stakes.

‘She’s a lady who has really grown into her style and knows what suits her,’ she explained.

‘She was the first royal to wear a jumpsuit in the Royal Enclosure at Royal Ascot this year – a real royal fashion moment.’

Read on to discover some of Alicia’s secrets to looking good and taking care of your clothes.

Alicia Healey trained as a Royal Lady’s Maid at Buckingham Palace and made a a career out of dressing high profile clients around world, including Saudi royalty 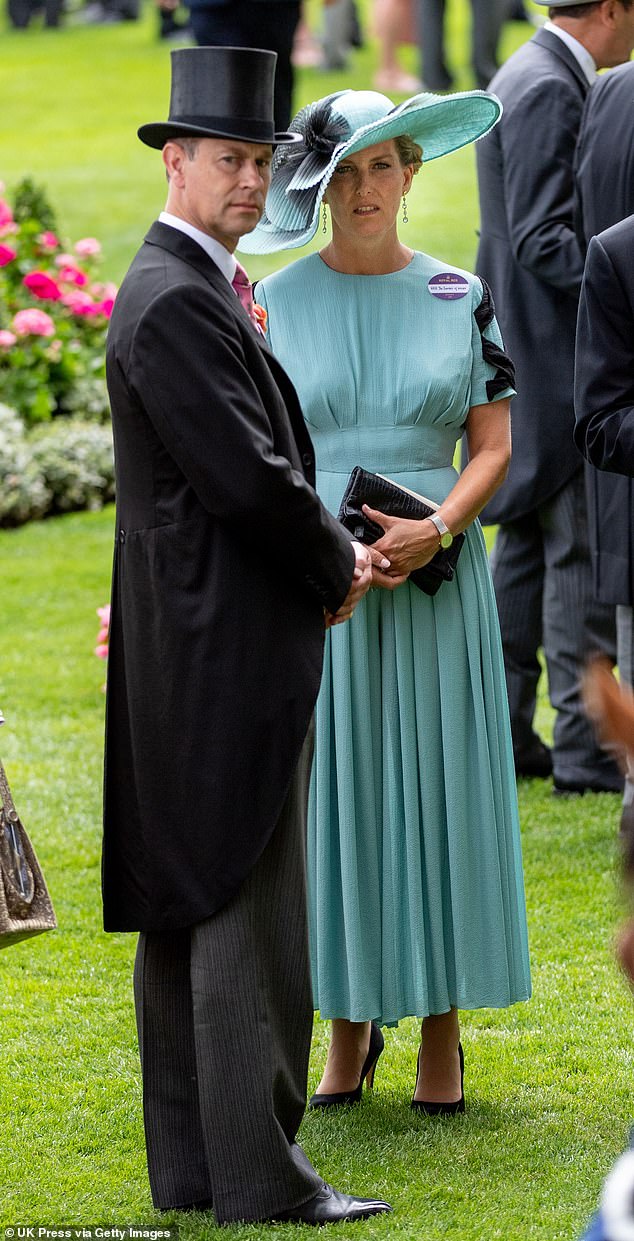 The Countess of Wessex became the first British royal to wear a jumpsuit to Royal Ascot, when she donned a pale blue wide-legged style by Emilia Wickstead in June 2018

HOW TO DEAL WITH MOTHS

Keep your house as clean and dust-free as possible, especially around the wardrobe space and clothing storage areas. The wardrobe itself should be cleaned out thoroughly a couple of times a year, perhaps when you are rotating clothes with the seasons.

Re-line drawers with lavender or cedar-scented lining paper. Try to do a deep clean in the bedroom/dressing room two or three times a year.

To trap adults male moths and prevent them from breeding, place a pheromone moth trap inside the bedroom. The strip contains powder saturated with female pheromones, which will attract and trap the male moths, preventing them from reproducing and causing any further damage. 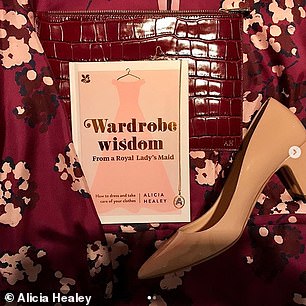 Alicia’s new book shares secrets from her years as a royal dresser, detailing how to look good and take care of your clothes so that they last

KEEP YOUR JEWELLERY IN GOOD CONDITION

Costume jewellery should still be stored properly as the metals are less durable than fine jewellery, so need to be protected if they are to last. Necklaces can be placed within jewellery divider trays in drawers.

Trays with different sized compartments are good to prevent different items getting tangled. Acrylic jewellery chests and stackable trays are another good option; the transparent plastic makes it ways to view the contents.

It is advisable to put jewellery away after wear rather than displaying it on exposed jewellery trees of stands as these will just attract dust.

HOW TO ALWAYS LOOK POLISHED IN PUBLIC

Guests at Princess Eugenie’s wedding, including Chelsy Davy, battled to keep their hats on in bluster conditions, and that’s why Alicia recommends a simple style secured with elastic

Alicia told Tatler that the standout trick she’s learned from working with people who make public appearances is choosing fabrics that don’t crease.

‘I found it interesting that this is something Samantha Cameron considered when designing her range of dresses for Cefinn, and it was obviously from her personal experience as a “First Lady”,’ she explained.

HOW TO CARE FOR AND WEAR HATS

For formal occasions, Alicia recommends pill box or beret-style hats that can be secured with an elastic band so that you don’t have to worry about it being blown away.

She recommends steering away from a large, statement hat and leaving that to the mother-of-the-bride.

Always wash your knitwear on the lowest heat and change the spin setting to the minimum possible, as too much will agitate the fibres.

If you do get bobbles and piling, gently remove them with a knitwear comb and not a razor.