A former teacher who quit her job to take up a role as a cashier at Costco has laid bare the horrifying ‘trauma’ she suffered while working in education – claiming it left her ‘broken’ and ‘fearing for her life’.

Maggie Perkins, 30, from Atlanta, Georgia, was a teacher for eight years in both public and private schools in two different states. During that time she taught three different subjects and eight grade levels, including university students.

However, she decided to quit teaching more than five months ago and since then, she has been detailing how much better her life is via TikTok where she has more than 80,000 followers.

In one clip the mom-of-two touches on some of the perks of working as a cashier at Costco, telling viewers: ‘I’m not afraid for my life, I’m not laying awake at night worrying about parent emails, I’m treated with respect [by] my managers… I can go to the bathroom if I need to go to the bathroom. 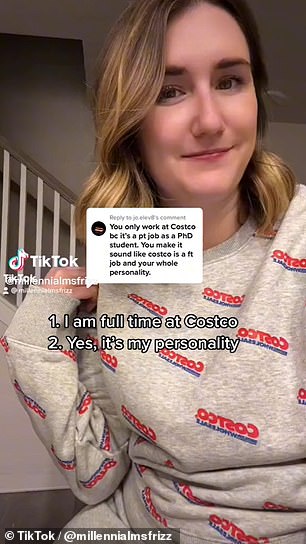 Maggie Perkins, 30, from Atlanta, Georgia, was a teacher for eight years in both public and private schools in two different states. But now she says she’s much happier working at Costco 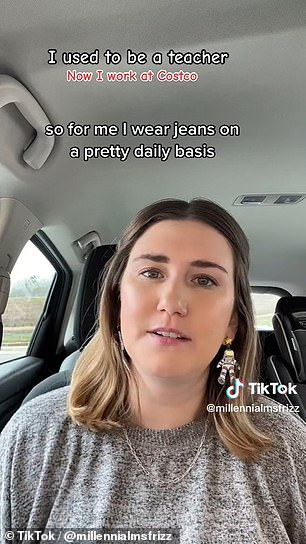 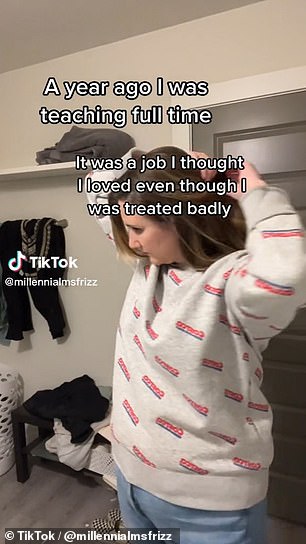 In her TikTok videos  the mom-of-two touches on some of the perks of working as a cashier at Costco, with these including a relaxed dress code and less stress

‘I spent my career as a teacher trying to make sure that I want doing something wrong versus at Costco I’m able to focus on the things that I’m doing right and how to do them better.’

OTHER PERKS OF WORKING IN COSTCO ACCORDING TO MAGGIE: Less stressful work environment, more relaxed dress code, free executive membership for friends and family, quality time with family when at home, free snacks from the bakery

Many of Maggie’s followers have quizzed her about her salary and she says her finances haven’t changed since she quit teaching for working in retail.

She explains in one video, that when she was investigating whether she would like to work at Costco, she discovered on Glass Door that wages start at $18.50.

Costco employees start on the minimum wage with this rising $1 for every 1,000 hours worked.

According to job site Indeed.com, the average teacher salary in Atlanta is $19.54 per hour, with the lowest reported hourly wage being $10.72 and the highest being $35.61.

Maggie says she really enjoyed teaching and that was the part of the job she loved the most – along with ’98 per cent of the students’ – but the ‘gaslighting’ and poor treatment she experienced is what impacted her mental health.

She ended up being prescribed medication for anxiety, depression, ADHD, migraines, and insomnia during her time as a teacher.

Touching on the issues within the education system, she says: ‘Teachers are being coerced and gaslit on a daily basis to stay on this sinking ship.

‘I can say with great certainty that these issues are systemic [and] they are not getting better, they are getting worse.

‘One of the major problems is that teachers are exiting faster than they are entering the field. People are retiring as soon as they can – districts are making no effort to retain teachers and not making efforts to find out why teachers are leaving.

‘They’re just taking new people who are trained usually but not prepared. [They] will burn out very quickly and it’s not their fault even though people make them feel guilty for it. They are lacking support and they don’t have the veteran teachers to lean on that they used to.’ 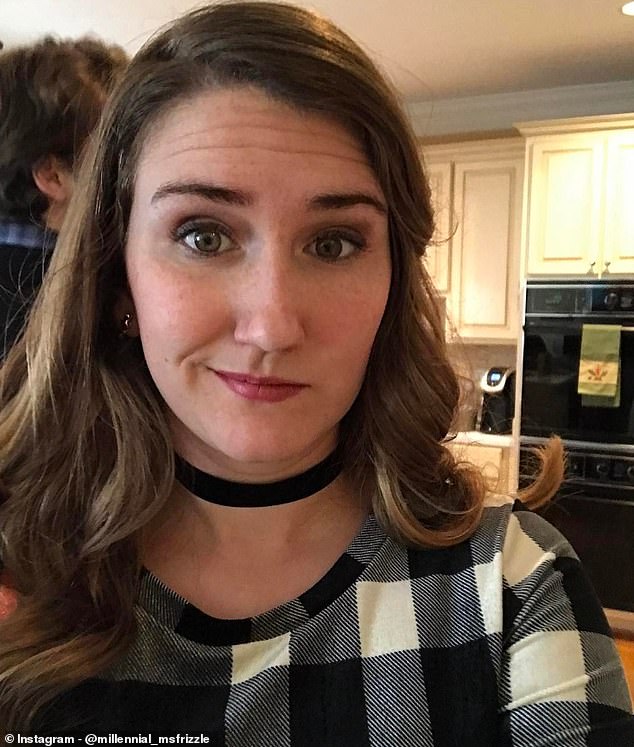 Maggie ended up being prescribed medication for anxiety, depression, ADHD, migraines, and insomnia during her time as a teacher

One commentator, @LaMo, asked Maggie if her teacher’s salary was doubled or tripled would she go back to teaching but she said ‘no’ as it was ‘never about the money.’

Along with a less stressful work environment other perks of working at Costco, Maggie says, include free snacks from the bakery, getting free executive membership for friends and family and wearing casual clothes.

While she says many people go into teaching to spend time with their family, she has found she actually has more quality time with her family as there is no marking or administration to do when she gets home.

She told one commentator who works as a teacher and said they were ‘too scared’ to quit and not ‘match’ their kids’ schedules: ‘Now that I only work 40 hours, I really am home with my kids when I’m home.’

Since talking about her career change via social media, Maggie says she has noticed that people are ‘very uncomfortable with the idea that someone can leave a “noble profession” and enter something that’s “just” retail and be happier.’

Addressing her doubters, she says: ‘I’m ok with that. The comfort of strangers on the internet is not what pays my bills or makes me happy but I do like calling attention to these dichotomies that we have in society and the values that have been assigned to teaching versus retail.’ 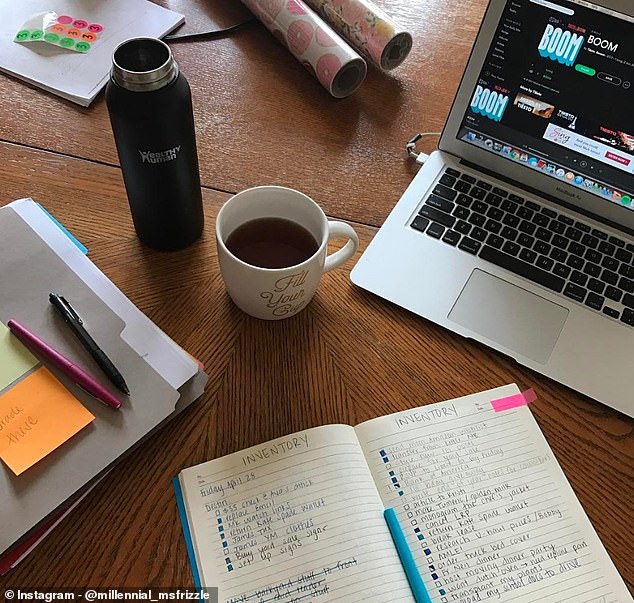 When she was a teacher, Maggie had to do administration when she got home from school 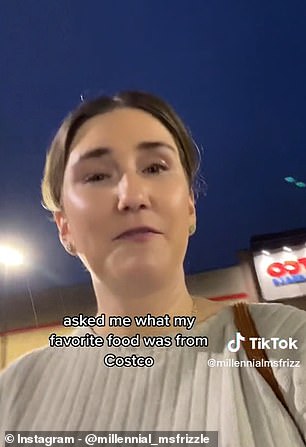 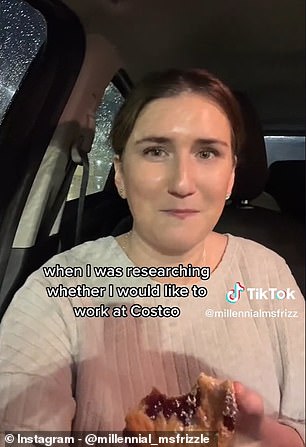 Since talking about her career change via social media, Maggie says she has noticed that people are ‘very uncomfortable’ with the idea that someone can be in retail and ‘be happier’

Looking ahead, Maggie says she might consider trying for a management position at Costco but for now she is ‘happy’ and needs to ‘learn a lot more before moving up.’

Many commenters have thanked the former teacher for sharing her story.

@Deter.Pinklage wrote: ‘My wife is leaving the education career behind and is considering Costco because of your story!’

And @AshtynMinnard said: ‘I feel like I owe my life to you. I just left education after a very brief introduction to it and have a degree. Thank you!!! For speaking out!!!’

While Maggie appears to be overjoyed working at Costco, some commenters have said they had a different experience while working there.

@Rachel warned TikTokers: ‘Do not work in the bakery at Costco. I repeat DO NOT. Literally the worst years of my life.’

While @JoshuaJames mused: ‘Shopping at Costco the other day I was not happy. It’s a zoo. Working there would be a nightmare.’

Maggie acknowledges while there might be the odd ‘grumpy cat’ visiting the store, her overall work life balance is much better than when she worked in education.

She concludes: ‘I used to just joke that the air was dirty and kids were germy. It was so much more. I spent my 20s just crumbling. It’s still shocking to me how different my life is now that I’ve left.’