Former White House Press Secretary Sarah Huckabee Sanders has released an excerpt from her upcoming book in which she slams former National Security Adviser John Bolton for being ‘drunk on power.’

Sanders’ excerpt release comes as Bolton continues to grab headlines – and White House ire – for his revealing memoir, The Room Where It Happened, out Tuesday.

On Monday, Sanders used her Twitter account to release the excerpt from her own book, Speaking for Myself: Faith, Freedom, and the Fight of Our Lives Inside the Trump White House, due out in September. 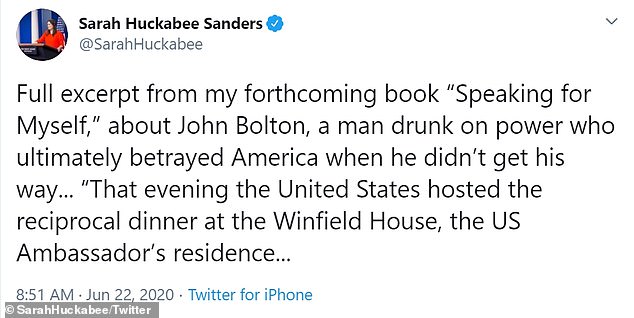 As the prelude to the excerpt from the book, which chronicles an incident that apparently took place during President Trump’s state visit to the UK in June 2019, Sanders tweeted that Bolton is ‘a man drunk on power who ultimately betrayed America when he didn’t get his way.’

Sanders revealed in the excerpt that during trips abroad, ‘Bolton had a separate agenda and often arrived and departed on a different plane because he didn’t want to travel on Air Force One with the President and his team.’

According to Sanders, ‘Bolton apparently felt too important to travel with the rest of us. It was a running joke in the White House.’ 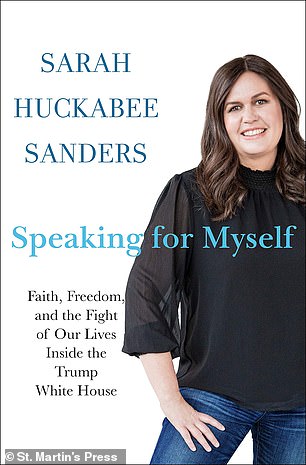 The excerpt is from Sanders’ upcoming book, Speaking for Myself, due in September

During the UK trip, while in London, Sanders noted that since Trump would be doing most of his traveling via helicopter on Marine One, there wouldn’t be the usual presidential motorcade to ride in.

Instead, the administration staffers would have to make do with just ‘one small staff motorcade’ to get from place to place.

In the lead up to the trip, Sanders said that former Deputy Chief of Staff Dan Walsh had specifically ‘asked Bolton’s team to be sure to wait on the senior White House staff vehicles traveling to the Winfield House so they could be part of Bolton’s motorcade and not get stuck in traffic’ – a request which Bolton’s staff apparently acknowledged.

Winfield House is the London townhouse where the US Ambassador to the UK lives.

Sanders wrote that on the day in question, she and many of Trump’s senior White House officials hopped onto a ‘small black bus’ to get to Winfield House.

‘On board were Treasury Secretary Steven Mnuchin, Acting Chief of Staff Mick Mulvaney, Senior Advisor Stephen Miller, Senior Advisor Dan Scavino, Walsh and me. Based on US protocol, Mnuchin, Mulvaney and Walsh all outranked Bolton. Mnuchin, one of the highest ranking officials in government, far outranked him,’ Sanders wrote. 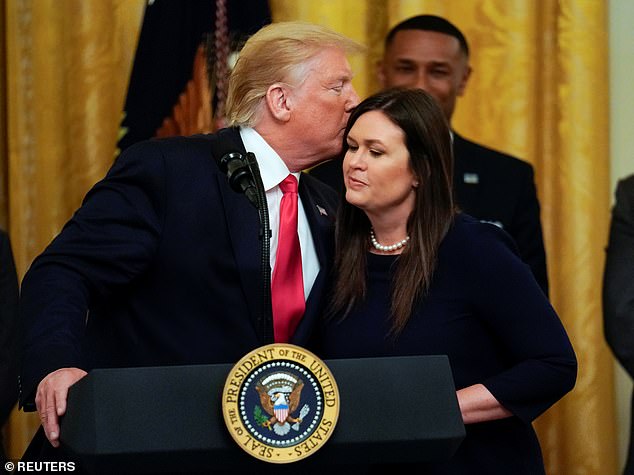 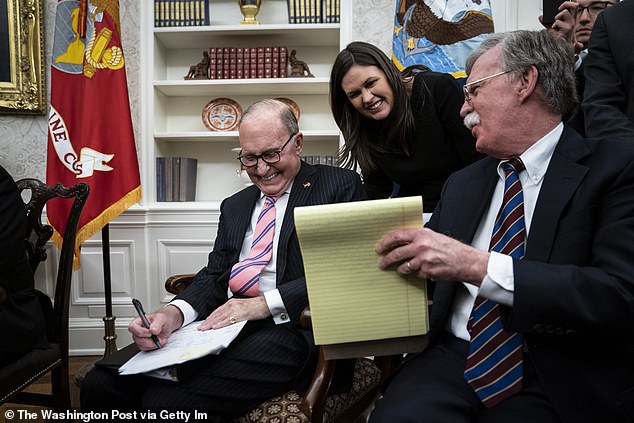 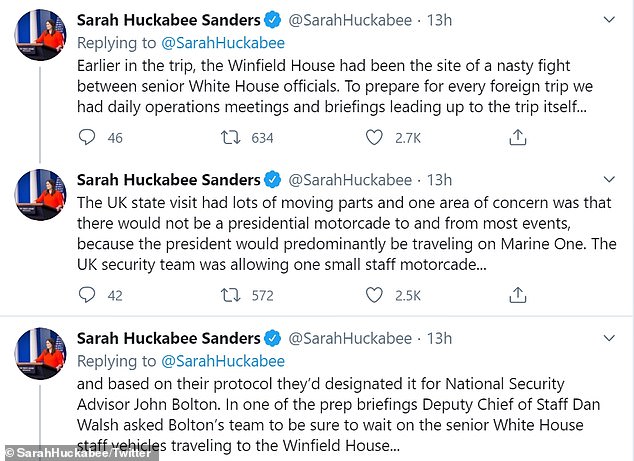 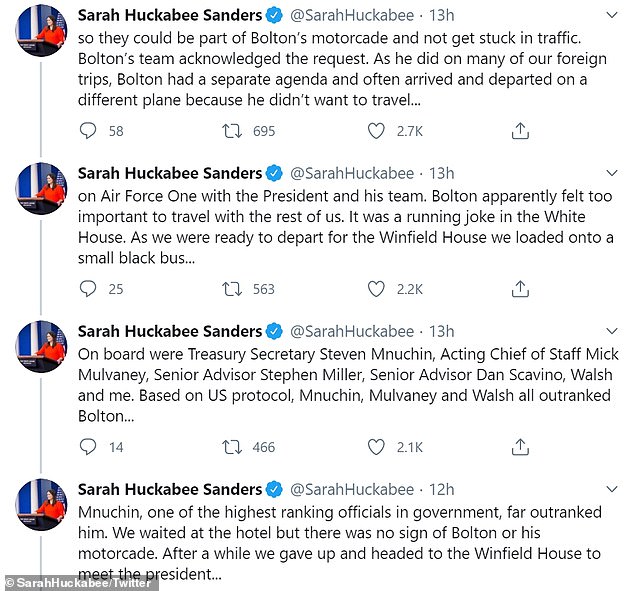 ‘We waited at the hotel but there was no sign of Bolton or his motorcade. After a while we gave up and headed to the Winfield House to meet the president. While en route, UK police directed us to pull to the side of the road because someone was coming through…we looked over to see who it was and sure enough here came Bolton and his motorcade. We waited and watched as Bolton sped by and left us in the dust.’

Sanders recalled that as soon as they saw Bolton’s motorcade zip past, ‘The discussion on the bus quickly moved from casual chit chat to how arrogant and selfish Bolton could be, not just in this moment but on a regular basis. If anyone on the team should have merited a motorcade it was Mnuchin, but he was a team player.’

Mnuchin, in 2018, had drawn fire when it was revealed that he had spent $1million of  taxpayer money to fly pricey military aircraft in just eight trips, more than half of which were domestic locations.

Sanders noted that once the senior staffers finally got to Winfield house, the ‘typically laid-back’ Mulvaney ‘unleashed a full Irish explosion’ on Bolton.

”He lit into him in a way I hadn’t seen him do to anyone before,’ Sanders wrote. ‘Mick made clear he was the chief of staff and Bolton’s total disregard for his colleagues and common decency was unacceptable and would no longer be tolerated. “Let’s face it John,” Mick said. “You’re a f—— self-righteous, self-centered son of a b——!”‘ 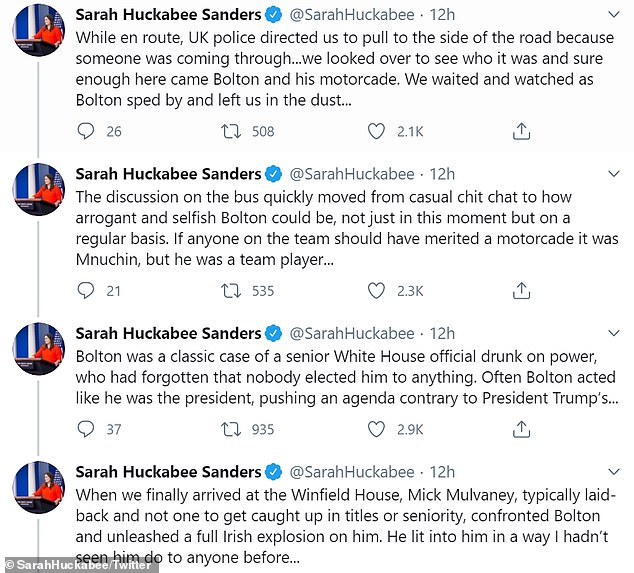 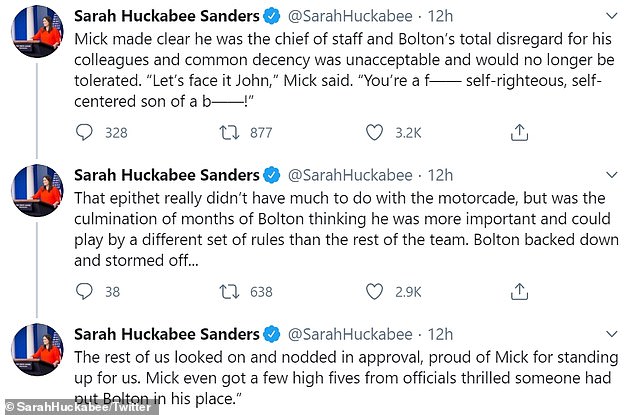 Sanders’ tweeted out the lengthy excerpt on Monday, the day before Bolton’s book releases 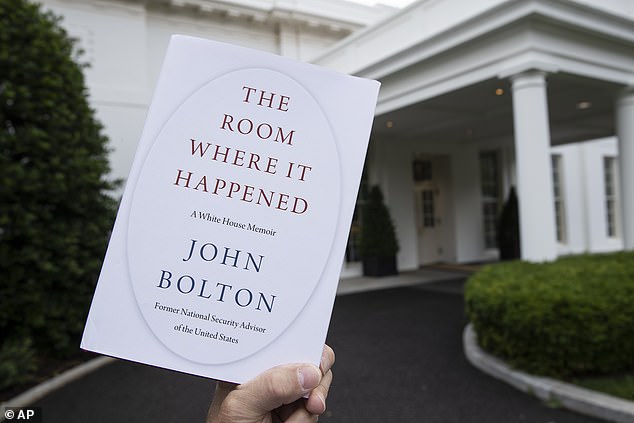 Bolton’s book, The Room Where It Happened, is expected to be a revealing account of his time as National Security Advisor. The White House has tried to block the book’s release

Sanders has cast doubt on the contents of Bolton’s books, claiming he was ‘lying’ either now or when he was in his White House position

Bolton, Sanders said, ‘backed down and stormed off’ while the rest of the senior staffers ‘nodded in approval’ and even gave Mulvaney high fives.

Sanders noted that Mulvaney’s comments were ‘the culmination of months of Bolton thinking he was more important and could play by a different set of rules than the rest of the team.’

During the except, Sanders also noted that ‘Bolton was a classic case of a senior White House official drunk on power, who had forgotten that nobody elected him to anything. Often Bolton acted like he was the president, pushing an agenda contrary to President Trump’s.’

Bolton, a Trump supporter, was Trump’s national security advisor before being pushed out of the role in September 2019, after 18 months on the job.

On Monday, Trump tweeted that he decided to give Bolton a ‘chance,’ but that he ‘turned out to be grossly incompetent, and a liar.’

On Saturday, a federal judge denied a request by the Department of Justice to block Bolton’s book release on the grounds that it’s a national security risk.

The Justice Department has also sued Bolton himself, claiming that the book violates nondisclosure agreements he signed.