A former US Army sergeant in Florida fought off a nearly 13-foot alligator after it attacked his rescue dog during a morning walk.

Trent Tweddale and his six-year-old dog, Loki, were walking along a riverbank near his Wesley Chapel farm in Pasco County on Monday.

Tweddale told WFLA that Loki was standing in the river when an alligator lurking in the water suddenly lunged at the dog.

‘The dog had his front paws in the river here that swelled after all the rain and the dog was attacked by a gator,’ said Tweddale.

He said the massive alligator clenched onto Loki and pulled him into the water.

Former US Army sergeant Trent Tweddale (pictured) fought of an alligator to save his dog, Loki, on Monday

Tweddale, who was in the US Army for at least 10 years, quickly sprung into action.

‘I grabbed the dog’s collar to try to pull him back, and I ended up in a tug-of-war match with this gator, and the gator was not letting go,’ said Tweddale.

‘So I let go of the collar, and I got about knee-deep into the water and started pounding on the gator’s head until he eventually let go.’

Loki was rushed to a local veterinarian to undergo emergency surgery. 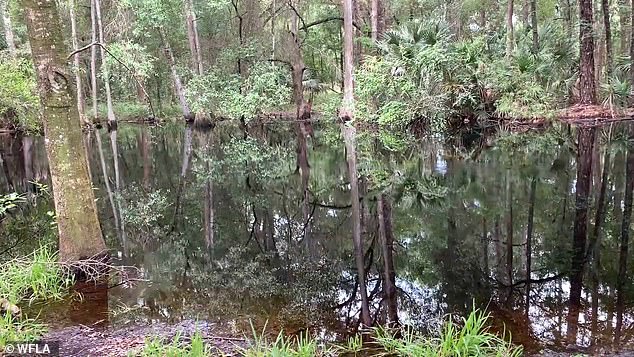 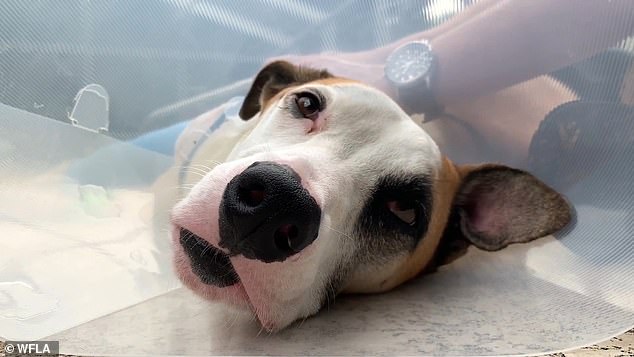 Tweddale: ”I grabbed the dog’s collar to try to pull him back, and I ended up in a tug-of-war match with this gator, and the gator was not letting go’ 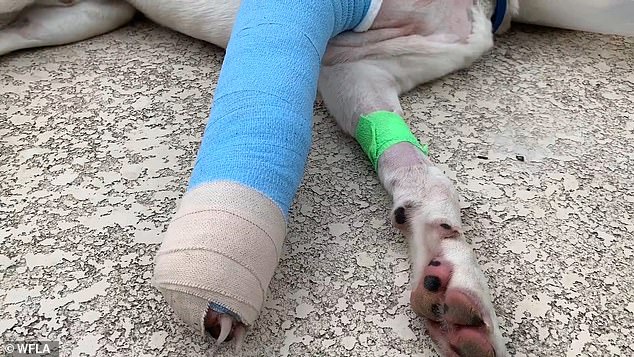 ‘When I pulled him back up, the bones were out and it looks like the arm was just hanging by a shred,’ Tweddale explained.

‘They put metal plates and screws in and were able to reconstruct it that way. We’re hoping that he can regain full use of his paws after this.’

Kristina Deak, Tweddale’s wife, recalled in a Facebook post the heart-pounding moments after Loki was attacked and they rushed the dog to the veterinarian.

‘I’ll never forget running outside to his screams, holding Loki’s shredded, broken leg together to stop the bleeding, and trying to keep him calm while Trent drove to the vet. I thought for sure Loki would die in my arms before we made it there,’ she wrote.

‘Loki started shaking extra hard in the last 15 minutes of the car ride and was in severe shock by the time we made it to the vet.

‘When the vet took him in the building we weren’t sure we’d ever see him again.’ 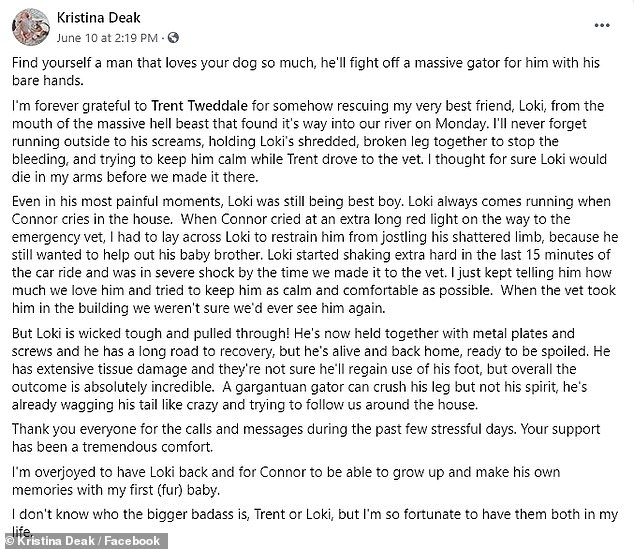 Kirstina Deak, Tweddale’s wife, recalled the scary moments after Loki was attacked by the alligator in a Facebook post 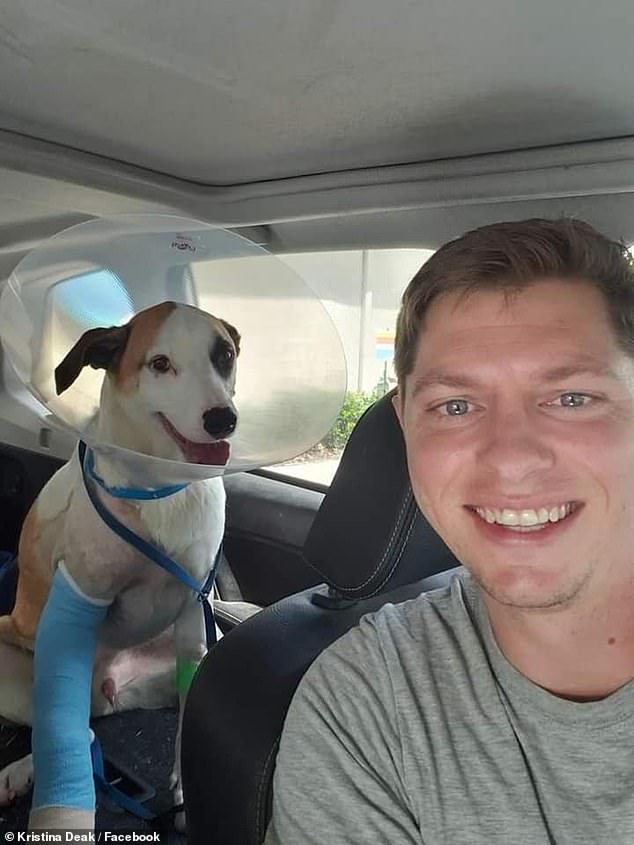 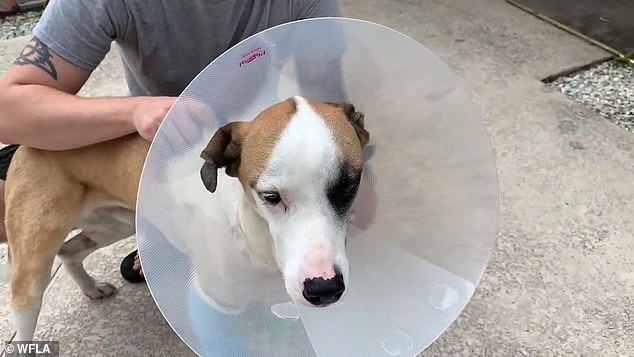 Kristina Deak:’A gargantuan gator can crush [Loki’s] leg but not his spirit, he’s already wagging his tail like crazy and trying to follow us around the house’

Deak then said that Loki is recovering from the encounter and is ‘alive and back home, ready to be spoiled.’

‘A gargantuan gator can crush his leg but not his spirit, he’s already wagging his tail like crazy and trying to follow us around the house.’

Now, Tweddale is determined to track down and catch the alligator who attacked Loki.

He set up a trap for the gator with the help of Florida Fish and Wildlife using a rooster. 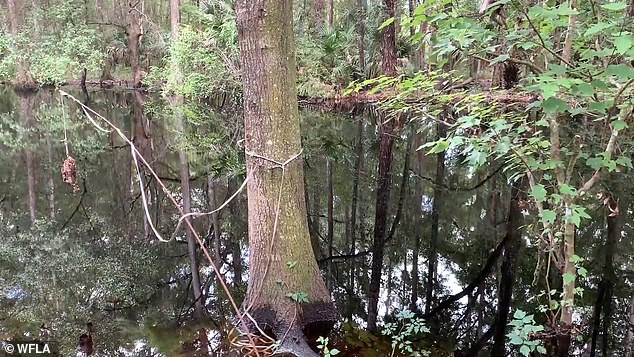 Tweddale, with the help of Florida Fish and Wildlife, set up a alligator trap at the river in hopes of catching the massive reptile 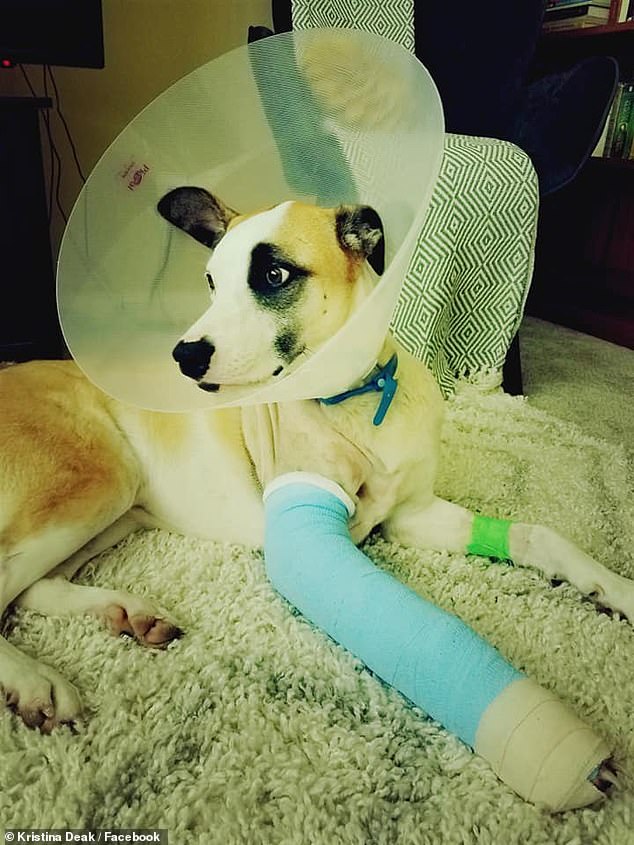 ‘The trapper did not have any bait, so I grabbed one of my roosters and we used him as bait for the trap. We haven’t had any luck yet,’ said Tweddale.

‘We love our dog a lot and I’d fight tooth and nail for him.’

According to Defenders of Wildlife, a non-profit conservation organization, there are around 1.2 million alligators located across Florida.

The reptile tends to be an opportunist feeder and usually pursue food that is ‘abundant and easily accessible.’

Alligators are in the midst of mating season, meaning that they can become more aggressive during this time.