It was a bit of spring cleaning that uncovered a 460 million year old fossil of an underwater ‘killing machine’ at the Museum and Art Gallery of the Northern Territory.

Endoceras (Ancient Greek for ‘inner horn’) is an extinct genus of large cephalopod that resembled a giant ‘straightened-out’ nautilus.

An Endoceras fossil had been in the Darwin museum’s collection for years when senior curator Adam Yates stumbled across it when the institution was moving items to its new digs at Megafauna Central in the heart of Alice Springs.

‘This particular fossil was found lurking in the basement of the old space where the collection was temporarily stored,’ Yates told the Australian Broadcasting Company (ABC).

While Endoceras were widespread in North America and Europe, this one lived in Central Australia, swimming in shallow seas that are now the dry, desert-like Outback.

Australia’s deserts are among the youngest on the planet, only about 1.5 million years old—as recently as 65 million years ago, the continent was actually a number of smaller landmasses separated by shallow seas.

‘It is probably not widely recognized amongst our ordinary everyday people that Central Australia was home to these marine animals and their fossils can still be found in places like the MacDonnell Ranges,’ Yates told ABC.

‘The segment of fossil that you see is only a part of the whole creature,’ he added.

The full specimen would have been ‘exceptionally large,’ he said, likely more than eight feet long.

Resembling an uncoiled nautilus, Endoceras was one of the largest animals on the planet 460 million year ago, before the advent of the dinosaurs or any animal with a backbone 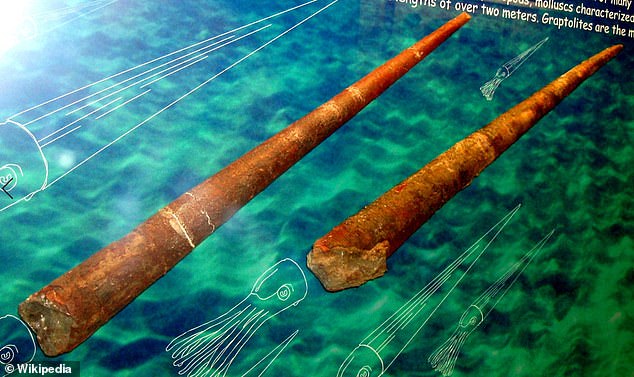 The Endoceras in the museum’s collection lived in Central Australia some 460 million years ago, swimming in shallow seas that are now the dry, desert-like Outback

That would make it one of the largest animals on the planet at a time that predates the dinosaurs or any animal with a backbone.

First documented in 1847, Endoceras had a crown of tentacles with a sharp beak like a squid,  which it could use to tear intro prey.

Its shell, which tapered off to a point, would have been filled with gas chambers used for buoyancy control ‘so they could float up and down at will,’ Yates said.

The creatures, sometimes described as Lovecraftian, could also expel water from its gill chamber, ‘and basically jet propel themselves backwards,’ he added.

Paleontologists believe Endoceras were ‘ambush predators,’ hiding in wait on the seafloor and springing on fish and trilobites that swam too close.

The Endoceras fossil is only part of the full specimen, which Yates estimate was more than eight feet long 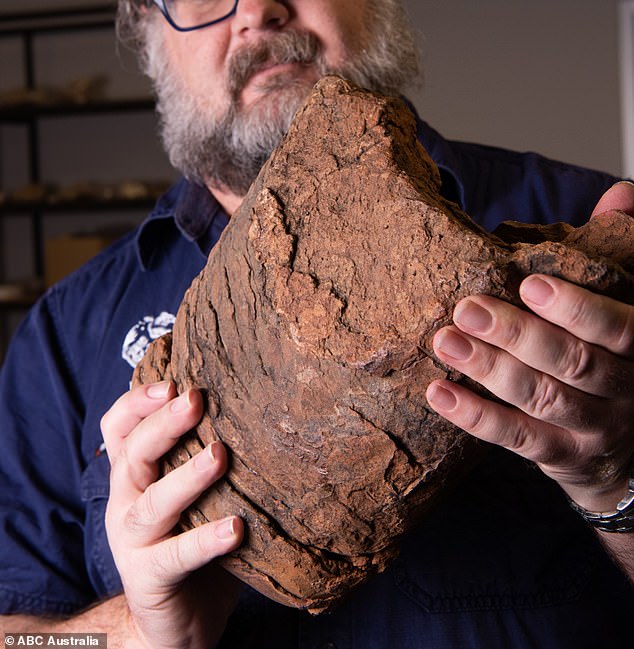 Endoceras were ‘ambush predators,’ hiding in wait on the sea floor and springing on fish and trilobites that swam too close. Pictured: Adam Yates displays the Endoceras fossil

But its cousin, the modern-day nautilus, has an evolutionary advantage, according to Yates: With its coiled shell, ‘you don’t have to carry this great big long shell dragging behind you.’

A specimen of Endoceras giganteum at the Museum of Comparative Zoology in Cambridge, Massachusetts measuring 9.8 feet is believed to have been almost 19 feet when alive.