Fossils: Woolly mammoths may have been driven to extinction because it was TOO WET, study claims

Woolly mammoths may have been driven to extinction not by human hunting but as a result of the climate becoming too wet, a new study has proposed.

The melting of icebergs as the climate rapidly changed wiped out the vegetation on which the mammoths relied, experts led from the University of Cambridge argued.

Key to the study was a new genetic analysis technique that has also recently used to track the spread of COVID-19 by looking at human waste in sewer systems.

This meant that the team was not reliant on bone or teeth samples to recreate an ancient DNA profile — but could use deposits such as faeces, skin cells and urine.

From this, they were able to see how not only mammoths but also the other animals and plants that lived alongside them changed over some 50,000 years.

The team found that woolly mammoths generally lasted longer than was previously thought — with some remaining in mainland Siberia as late as 3,900 years ago.

(Previously, it had been thought that only isolated populations still survived by that time, in locations such as Siberia’s St Paul Island and Alaska’s Wrangel Island.)

This means that they co-existed with humans for tens of thousands of years, and therefore that hunting was unlikely to have played a significant role in their demise.

Instead, their loss appears to have coincided with the final shift from the ‘Mammoth Steppe’ environment to peatland, which took away the giant animal’s food sources.

Woolly mammoths (depicted in this artist’s impression) may have been driven to extinction not by human hunting but as a result of the climate becoming too wet, a new study has proposed 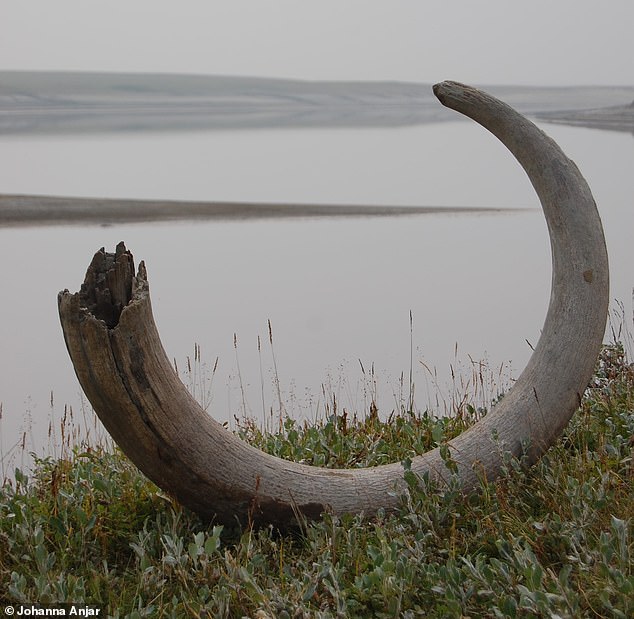 The melting of icebergs as the climate rapidly changed wiped out the vegetation on which the mammoths relied, experts led from the University of Cambridge argued. Pictured: a woolly mammoth tusk seen resting on the bank of the Logata River, in Russia, in the present day

Based on their findings, the team  have concluded that the steppe environment in which woolly mammoth lived — alongside other megafauna like bison and woolly rhinos — was quite unique.

Despite being cold, the steppe was home to a variety of plants on which the giants would have feasted — including grass, flowers and shrubs.

Experts believe the mammals likely used their tusks to clear snow, and their trunks to uproot tough vegetation to feat upon.

Humans also lived alongside woolly mammoth for tens of thousands of years and are known to have used their remains to produce shelters, harpoons and even bone-based flutes.

‘Scientists have argued for 100 years about why mammoths went extinct,’ explained paper author and evolutionary geneticist Eske Willerslev of St John’s College, the University of Cambridge.

‘Humans have been blamed because the animals had survived for millions of years without climate change killing them off before, but when they lived alongside humans they didn’t last long and we were accused of hunting them to death.

‘We have finally been able to prove was that it was not just the climate changing that was the problem, but the speed of it that was the final nail in the coffin.

‘They were not able to adapt quickly enough when the landscape dramatically transformed and their food became scarce.

‘As the climate warmed up, trees and wetland plants took over and replaced the mammoth’s grassland habitats.

‘And we should remember that there were a lot of animals around that were easier to hunt than a giant woolly mammoth — they could grow to the height of a double decker bus!’

‘The most recent Ice Age — called the Pleistocene — ended 12,000 years ago when the glaciers began to melt and the roaming range of the herds of mammoths decreased,’ said paper author and zoologist Yucheng Wang, also of Cambridge.

‘It was thought mammoths began to go extinct then but we also found they survived beyond the Ice Age all in different regions of the Arctic and into the Holocene, the time that we are currently living in — far longer than scientists realised.

‘We zoomed into the intricate detail of the environmental DNA and mapped out the population spread of these mammals,’ he explained. 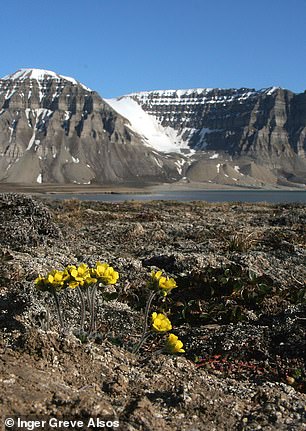 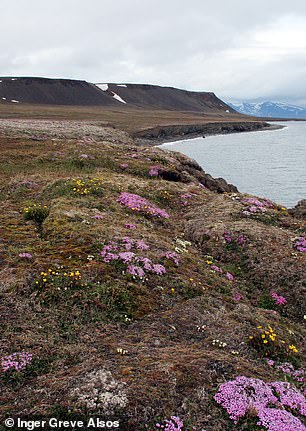 The researchers sequenced DNA collected from plant and animal remains found in soil samples collected at 535 Arctic sites known to have yielded mammoths fossils. From this, they were able to see how not only mammoths but also the other animals and plants that lived alongside them changed over some 50,000 years. Pictured: the modern Arctic landscape

‘When the climate got wetter and the ice began to melt it led to the formation of lakes, rivers and marshes,’ Dr Wang continued.

‘The ecosystem changed and the biomass of the vegetation reduced and would not have been able to sustain the herds of mammoths.

‘We have shown that climate change, specifically precipitation, directly drives the change in the vegetation — humans had no impact on them at all based on our models.’ 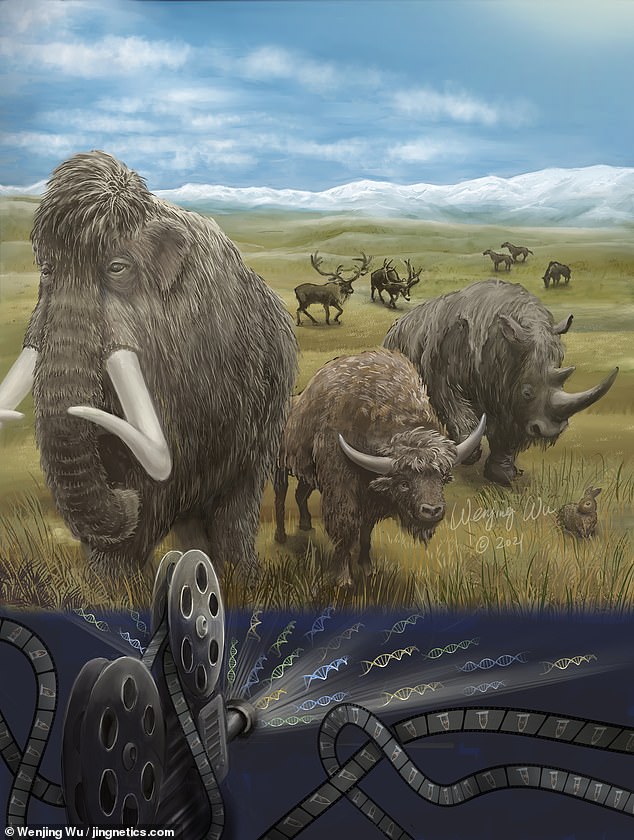 ‘This is a stark lesson from history and shows how unpredictable climate change is — once something is lost, there is no going back,’ said Professor Willerslev. Pictured, an artist’s impression of the Mammoth Steppe, as revealed by DNA analysis 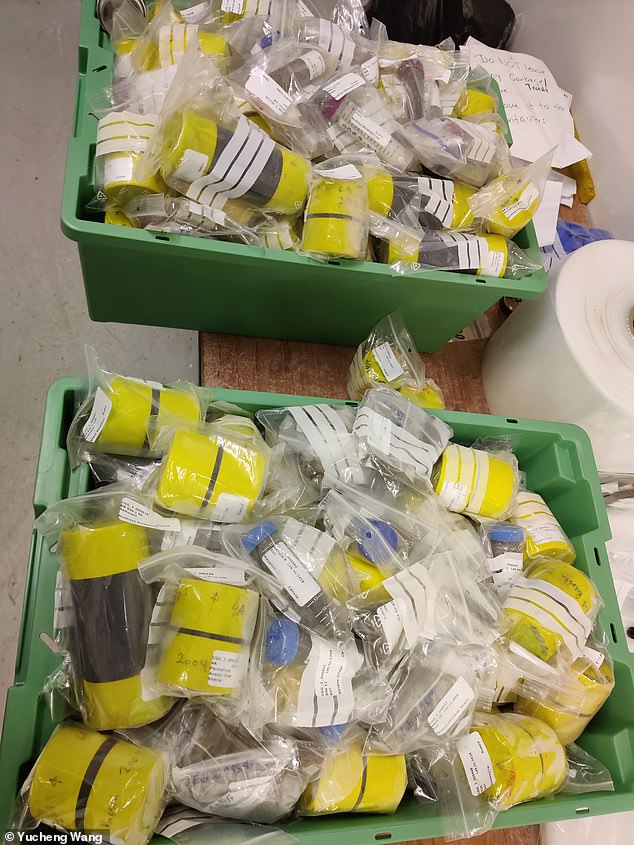 ‘When the climate got wetter and the ice began to melt it led to the formation of lakes, rivers and marshes,’ said Dr Wang ‘The ecosystem changed and the biomass of the vegetation reduced and would not have been able to sustain the herds of mammoths. Pictured: just some of the sediment samples studied by the team which were collected over the course of 20 years

‘This is a stark lesson from history and shows how unpredictable climate change is — once something is lost, there is no going back,’ said Professor Willerslev.

‘Precipitation was the cause of the extinction of woolly mammoths through the changes to plants. The change happened so quickly that they could not adapt and evolve to survive.

‘It shows nothing is guaranteed when it comes to the impact of dramatic changes in the weather,’ he added.

‘The early humans would have seen the world change beyond all recognition — that could easily happen again and we cannot take for granted that we will even be around to witness it.

‘The only thing we can predict with any certainty is that the change will be massive.’

Male woolly mammoths were around 12 feet (3.5 metres) tall, while the females were slightly smaller.

They get their name from the Russian ‘mammut’, or earth mole, as it was believed the animals lived underground and died on contact with light — explaining why they were always found dead and half-buried.

‘De-extincting’ the mammoth has become a realistic prospect because of revolutionary gene editing techniques that allow the precise selection and insertion of DNA from specimens frozen over millennia in Siberian ice.

The most widely used technique, known as CRISPR/Cas9, has transformed genetic engineering since it was first demonstrated in 2012.

The system allows the ‘cut and paste’ manipulation of strands of DNA with a precision not seen before.

Using this technique, scientists could cut and paste preserved mammoth DNA into Asian elephants to create and elephant-mammoth hybrid.

Mammoths roamed the tundra of Europe and North America for 140,000 years, going into decline at the end of the Pleistocene, 10,000 years ago.

While most mammoths went extinct at this time, small and isolated populations are thought to have survived in locations like Saint Paul Island (Alaska) and Wrangel Island (in the Arctic ocean) as recently as 5,600 and 4,000 years ago.