Fountain that stood in Turkey’s ancient ‘City of Gladiators’ 2,000 years ago has been restored

A colossal fountain that once stood in the ancient ‘City of Gladiators’ has been restored and will flow with fresh water for the first time in 2,000 years.

An excavation team has been working in the city of Kibyra in Turkey for the past four months, collecting 150 original fragments from the ruins in the area to piece the architectural masterpiece back together.

Sukru Ozudogru, an archaeologist at Mehmet Akif Ersoy University, said the water will flow through the fountain as it did 2,000 years ago, with water spouting from the mouths of lion and panther statues and falling into the two surrounding pools.

The fountain, constructed in 23 BC, is 50 feet in diameter, stands more than 26 feet high and was used for more than 600 years in Kibyra.

The ancient city of Kibyra is located in the township of Gölhisar in the southwestern part of the province of Burdur and is on the UNESCO World Heritage Tentative List.

According to the records of the Amasian traveler Strabo, the people of Kibyra were originally Lydians, indigenous people of this part of Asia Minor.

Once settled in Kibyra, the people established the city and constructed 100 stadiums throughout

Soon they changed their settlement areas and established a city with a circumference of 100 stadiums.

There is a magnificent 10,400-person stadium built with Roman and Byzantine architectural traditions, a music house covered with a Medusa mosaic, a late Roman bath, agoras, a main street and underground chamber tombs.

Ozudogru told Anadolu Agency (AA) that Kibyra was famous for its gladiators during the Roman Empire and lasted for 1,000 years.

The Roman general Lucius Licinius Murena defeated the ruler of Kibrya in 83 BC and incorporated the city into the Roman province of Asia.

The massive stadium was the scene of hundreds of gladiator fights

In 23 BC, an earthquake shook Kiybra and nearly destroyed the city.

The people eventually rebuilt and constructed the giant fountain during the work, but it first had a single pool.

The fountain was adorned with detailed statues of animals, columns and embossed friezes.

And the restored structure is complete with the same designs.

The ancient Romans held Turkey for centuries and constructed massive colosseums throughout the nation, just like the iconic one in Rome.

The arena was uncovered in 2021 during excavations in Mastaura, an ancient city in Aydin Province. The arena was partly buried and hidden by vegetation. 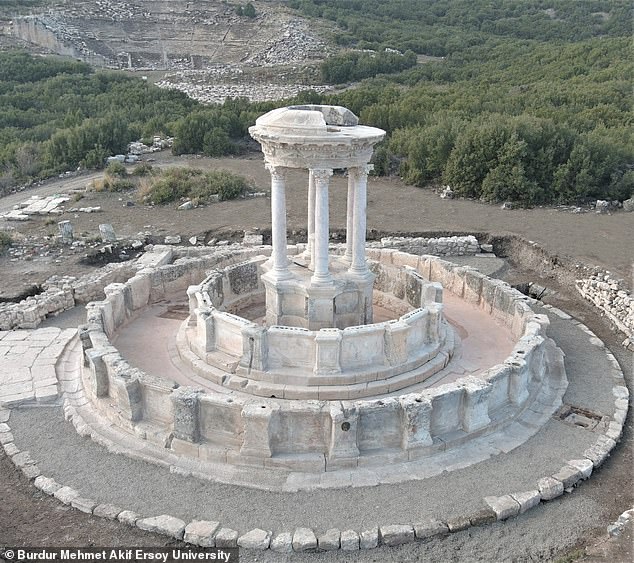 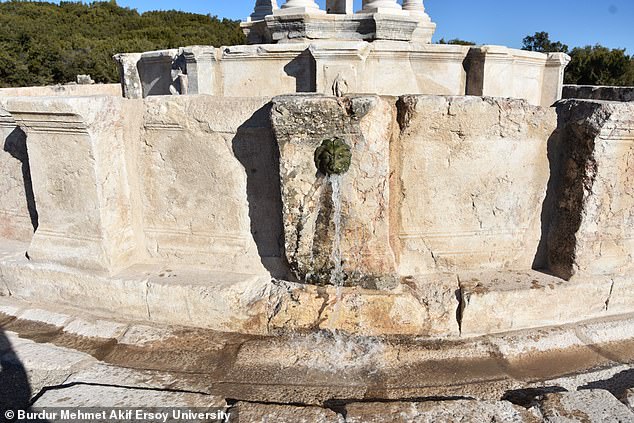 The fountain will soon flow with drinkable water as it did 2,000 years ago – out of the mouths of lion and panther statues placed around the structure

Archaeologists said the structure held more than 20,000 people when it was built in 200 AD.

Its remains were well preserved and built round, rather than in the half-moon shape typical of many ancient amphitheaters.

Rome’s Colosseum, which began construction in 70 AD for emperor Vespasian, was larger, housing an estimated 50,000–80,000 spectators in total. 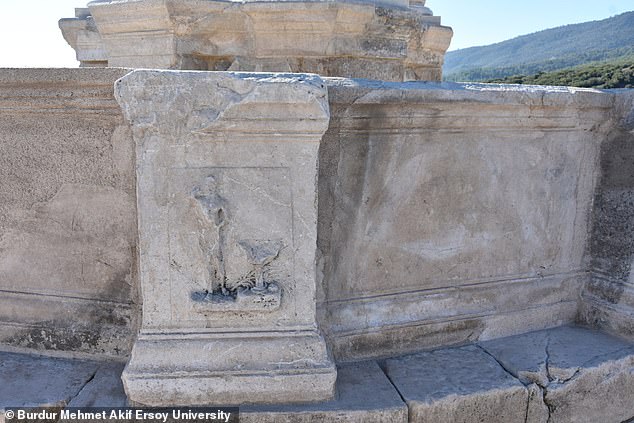 Some of the fragments still had original designs 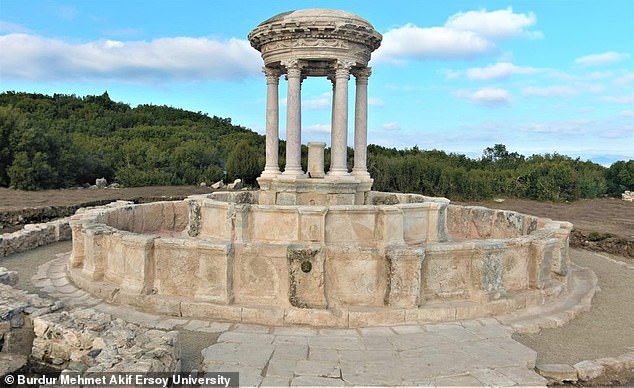 The fountain, constructed in 23 BC, is 50 feet in diameter, stands more than 26 feet high and was used for more than 600 years in Kibyra

‘There is no previous example of such an amphitheater in Anatolia and its immediate surrounding. He added that it is the only example that has survived this excellent way.

‘The building was not visible due to shrubs and wild trees.

‘In the parts of the building above ground, some of the rows of seats, the arena where the gladiators fought, and the supporting walls outside the building are visible,’ he continued.

The arena would have hosted an assortment of blood-soaked spectacles, Akkurnaz explained. 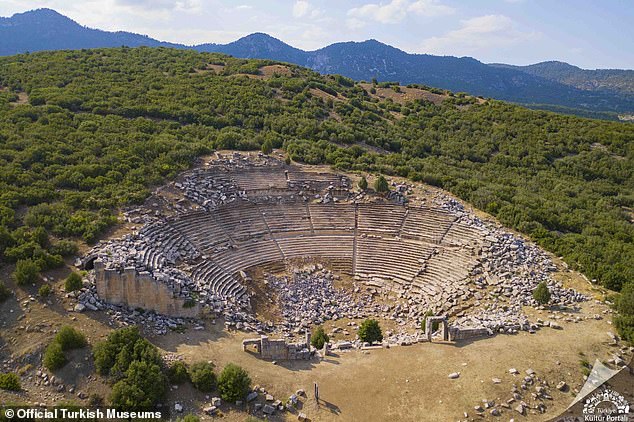 There is a 10,400-person stadium built with Roman and Byzantine architectural traditions in Kibrya (pictured)

‘It is a building designed for gladiator fights and wild animal fights,’ he said.

‘It has not been transformed from any other building.

‘Near Mastaura, there are many big cities in western Anatolia, such as Aphrodisias, Miletus, Priene, Magnesia and Ephesus.

‘People from these neighboring cities were coming to Mastaura to watch the big events in this building specially designed for bloody shows.’

Although the Mastaura arena may not exactly rival its counterpart in Rome for sheer size, its scale is still something to behold. 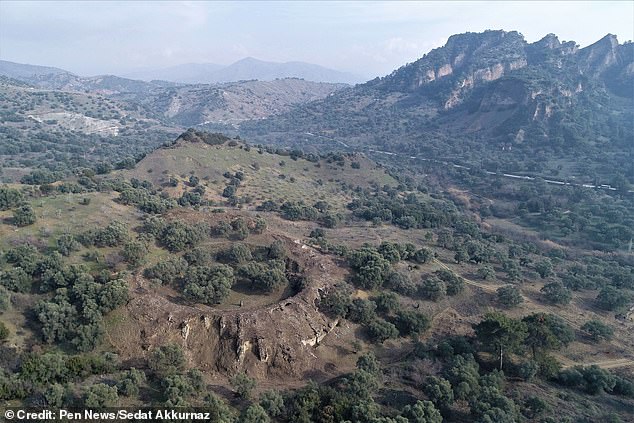 The ancient Romans held Turkey for centuries and constructed massive colosseums throughout the nation, just like the iconic one in Rome. The arena was uncovered in 2021 during excavations in Mastaura

‘At this stage, it is difficult to determine the exact or approximate audience capacity,’ said Dr Akkurnaz.

Inside the structure, a variety of rooms — each one with different functions — have also survived.