Four British men have been banned from working in Singapore and handed hefty fines after they broke lockdown to go on a bar crawl.

Four British men have been banned from working in Singapore and fined £5,000 each after this image of people drinking in public in violation of lockdown went viral. All four drank in this square on the day this photo was taken, though it is not clear if they are shown here

It comes after a picture of people drinking outside in Robertson Quay, an area known for its bars, went viral on social media the same day – causing outrage.

It is not clear if any of those fined were shown in the picture.

The court heard that the British men met by coincidence on the day in question at a venue called Bar Bar Black Sheep, which was closed but selling takeaway alcohol, in Robertson Quay.

The foursome bought drinks and then walked to another nearby area, where they bought more drinks from a venue called Boomarang.

Their final destination was an Italian restaurant called Rosso Vino, where they bought their final round, the Straits Times reports.

The men then stood in the road drinking and smoking for about 25 minutes before going home, prosecutors said.

On the same day, Brown and his wife also headed to Robertson Quay and bought alcohol before sitting down at a table to drink.

Czerny happened to be passing by walking his dog, and agreed to join the pair after they offered him a drink.

The trio spoke for about half an hour, before Czerny left.

Singapore, which was initially praised for keeping coronavirus under control without having to go into lockdown, was forced to bring in tough measures on April 7 as cases spiralled following outbreaks among migrant workers.

Dubbed ‘the circuit breaker’, people were told not to go outside except for essentials and were warned to stay one meter apart and wear masks. 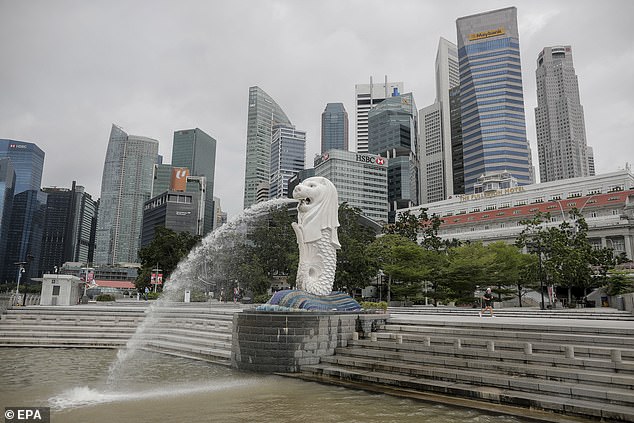 Singapore, initially praised for controlling coronavirus without a lockdown, was forced to bring in strict measures on April 7 after an explosion of cases in the city-state (file image)

Images of people gathered in Robertson Quay on May 16 caused outrage because people were ignoring social distancing and had no masks on.

Prosecutors had called for the Britons to be jailed for a week in order to set an example after their bar crawl – a description their lawyers vehemently rejected.

In the end the court settled for fines and work bans.

Bars in Robertson Quay were also ordered to stop selling alcohol because it was encouraging people to gather.

Two more Britons – Alfred Jon Veloso Waring, 34, and Olagunju Daniel Olalekan Olasunkanmi, 30 – have also been charged with drinking in the same area on the same day, but their cases are pending.

They are due back in court on July 7.

In total, Singapore has revoked the work passes of 140 people for breaking lockdown rules, the Ministry of Manpower announced.

Of those, 98 were punished for eating, drinking or gathering in groups outside. The other 42 were caught breaking stay-at-home or quarantine orders.

Singapore has 42,763 confirmed cases of the virus – the highest total in southeast Asia – and has registered 21 deaths from the virus.