Four in ten women on HRT have been unable to get their medication because of shortages, a poll reveals.

The crisis is forcing some women to go ‘cold turkey’ on the advice of their GP, causing the return of debilitating menopause symptoms.

Others are flying to Greece or Spain to get the drugs, or rationing their remaining medication to make dwindling supplies last longer.

A survey of 1,500 women on hormone replacement therapy by the Mumsnet and Gransnet online forums revealed that 40 per cent have been told by a pharmacist or GP that their medication is not available.

Four in ten women on HRT have been unable to get their medication because of shortages, a poll reveals (stock image)

HRT provides the oestrogen the body stops producing during the menopause and is taken by around one million women in the UK in the form of gels, patches or pills. It relieves symptoms including night sweats, depression and hot flushes.

But, as first revealed by the Mail, tens of thousands have been affected by HRT shortages in recent months.

I’ve had to go cold turkey

Elizabeth Collum has been forced ‘to go cold turkey’ after ten years on HRT, because she simply cannot get hold of the medication.

She was first hit by the shortages last year when she had to switch brands of oestrogen tablets. 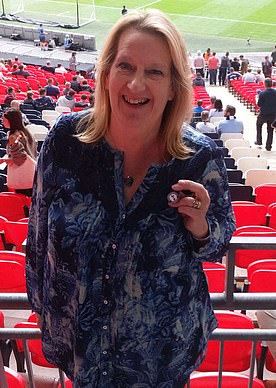 Elizabeth Collum has been forced ‘to go cold turkey’ after ten years on HRT,

But since last month she has not been able to find her drug, Indivina, anywhere.

Mrs Collum, 67, from Watford, said she finds it ‘almost impossible to function’ without HRT.

The retired civil servant added that her symptoms have now returned, saying: ‘I’m finding it really difficult to concentrate.’

These have been caused by a ‘perfect storm’ of manufacturing and supply problems that mean more than half of patches and pills are out of stock in pharmacies.

Women have been sharing stories online of the ‘nightmare’ they face in getting HRT. One told Mumsnet: ‘I went back to the GP and have been told to go ‘cold turkey’ and ‘see how it goes’ because there’s such a shortage.’

Other women have complained they are forced to traipse round dozens of pharmacies in a desperate attempt to find HRT.

Mumsnet and Gransnet founder Justine Roberts said: ‘It’s astonishing we still have no adequate explanation for the HRT shortage, many months after the problem emerged, and little evidence of concerted action to get supplies back into pharmacies.

‘It’s outrageous so many women face difficulties in filling their prescriptions.’

Mumsnet is calling on the Government to end the HRT shortage once and for all. It also wants more menopause training for GPs to ensure antidepressants aren’t prescribed where HRT is more appropriate.

Professor Janice Rymer, of the Royal College of Obstetricians and Gynaecologists, said: ‘It remains unclear why there is a shortage of HRT or when the normal supply of the products might resume.

‘This situation is unacceptable and the RCOG is committed to working with the Department of Health and Social Care and the industry to find solutions to this problem.’