Four Syracuse University students have been suspended for allegedly yelling the N-word at a black woman, as the campus continued to be convulsed by a string of shocking racial incidents.

Syracuse Chancellor Kent Syverud announced the suspensions on Wednesday night in an address to the university senate, saying the disciplinary measure stemmed from a verbal altercation outside a fraternity on Saturday.

It follows a rash of racist graffiti, a swastika found drawn in a snow bank, and an email telling a Jewish professor to ‘get in the oven.’

Police say that one widely reported incident, in which the accused Christchurch, New Zealand shooter’s white supremacist manifesto was Airdropped to random phones in the campus library, is likely a hoax and never occurred. 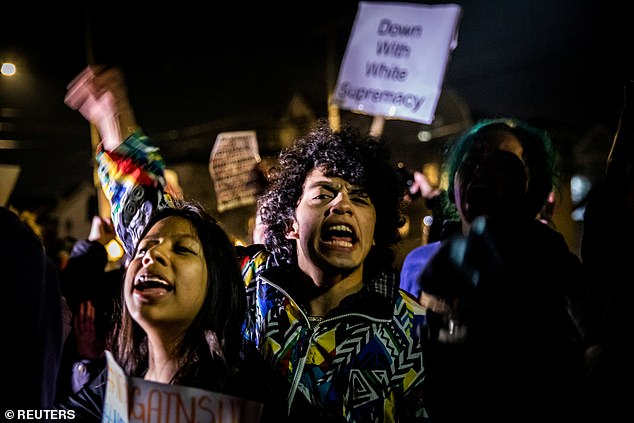 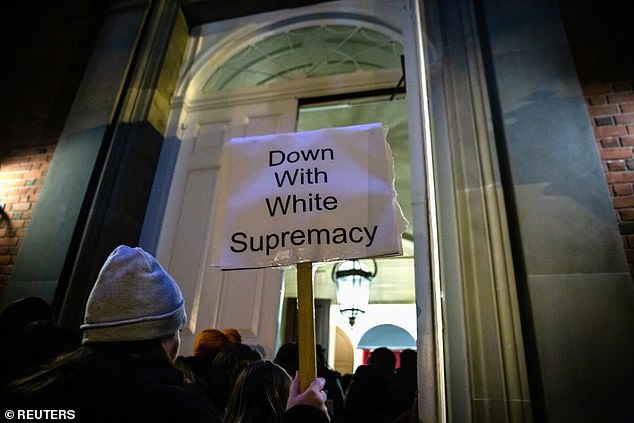 The Syracuse campus has been gripped by racial incidents, sparking mass protests

Syverud said that the four suspended students, who have not been named, were part of a group of 14 people leaving an Alpha Chi Rho fraternity party, with the other 10 being students at others schools not in central New York.

The group leaving the party got into an argument with a black female Syracuse student, who claimed that the group hurled racially abusive slurs.

Syverud said that Syracuse had notified the home schools of the other students involved in the university, adding that the individual described as being the most aggressive is associated with Rutgers University in New Jersey.

‘The entire case has also been referred to the Onondaga County District Attorney,’ Syverud said.

The national organization for Alpha Chi Rho strongly denied that any of its members used racially abusive language.

‘Our members have fully cooperated with the investigation, including providing hours of voluntary interviews with authorities Saturday night and representatives of the national office are also investigating,’ the group told the Daily Orange student newspaper. ‘Based on what we have learned, we can confirm that no member of Alpha Chi Rho directed racial slurs at anyone.’ 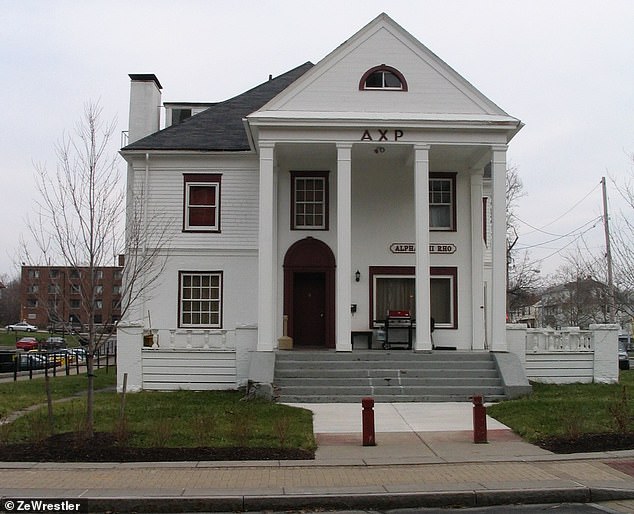 Alpha Chi Rho strongly denied that any of its members used racially abusive language, but the fraternity was banned from campus indefinitely. The Alpha Chi Rho house is seen above 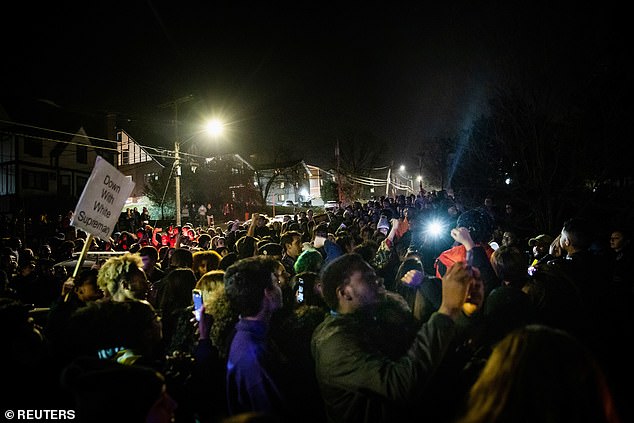 Students have issued a series of demands include immediate expulsion of students for hate speech, and diversity training for staff

In his address, Syverud also revealed that the most widely reported recent racial incident on the Syracuse campus, which sent students into paroxysms of panic, was likely a hoax.

Late on Monday night, there were rumors that students in the campus library received the manifesto of accused Christchuch shooter Brenton Tarrant via Airdrop.

‘Those reports sparked immediate fear and a firestorm of social media communication, which frankly, our team was not prepared to handle adequately in the middle of the night,’ Syverud said.

‘To date, law enforcement has not been able to locate a single individual who directly received an AirDrop. Not one. It was apparent that this rumor was probably a hoax,’ he continued.

The reign of racial terror began around November 7, when graffiti of racial slurs against black and Asian people were reported on floors four and six of Day Hall.

Syverud said that to date, there have been 12 cases of racist and anti-Semitic graffiti found on or adjacent to the Syracuse campus.

An inter-agency police task force has been mobilized to investigate the graffiti, and a donor has offered a $50,000 reward.

Then on November 14, a swastika was found in a snowbank across from a luxury apartment complex where students live.

The discovery prompted outrage and the Syracuse Police Department is currently investigating. 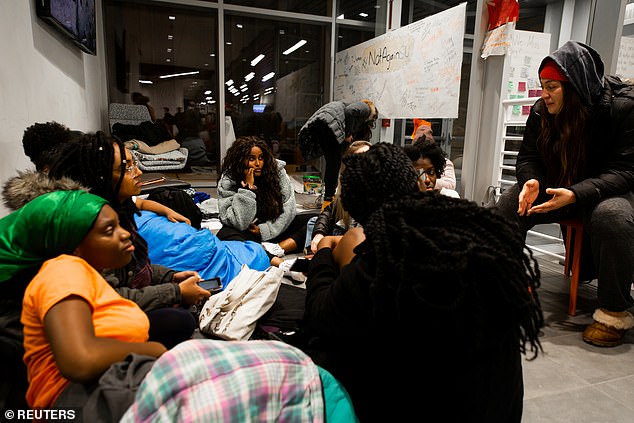 Students are seen protesting racism on campus with a sit-in, saying their demands must be met or Chancellor Syverund must resign immediately 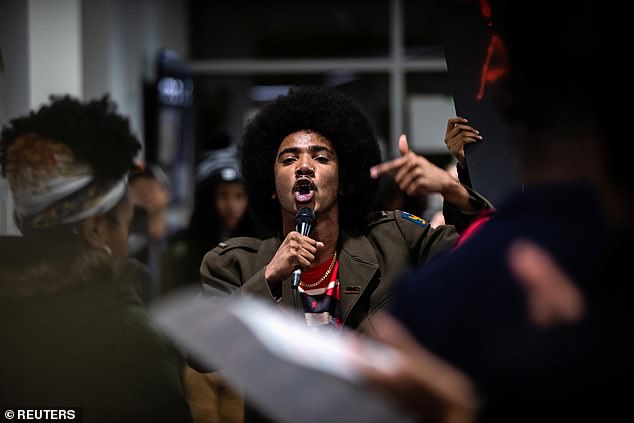 The campus has been reeling from an avalanche of racist graffiti. A swastika was even drawn in the snow, sparking a campus police mobilization and full investigation

On November 19, Syracuse professor Genevieve García de Müeller, who is Jewish, reported receiving an anonymous email which told her to ‘get in the oven where you belong’.

The email had the subject line ‘JEW’ and included a slur for Jewish people, as well as calling her ‘monstrous looking’.

Last night Syracuse students staged a protest where people chanted ‘sign or resign’ as they voiced a series of demands to the chancellor.

The demands include the expulsion of students for hate speech, diversity training for staff and greater security facilities including additional cameras.

Syverud quickly relented and agreed to nearly all of the demands. In Wednesday’s address to the university senate, he pleaded that he was on the side of the protesters.

‘I spent six years of my life publicly fighting to permit affirmative action in higher education admission based on race, leading to the Supreme Court’s decision,’ he said.

‘I did this while raising a mixed race family in the South. My kids were threatened, my wife was subjected to many racial epithets, our car tires were slashed, and my kid’s dog was shot,’ the chancellor continued.