A Fox News correspondent says he was chased from the White House by an angry mob in the early hours of Saturday, after the tempestuous crowd turned on the reporter and tried to steal his equipment.

Leland Vittert, 37, was positioned outside the White House shortly before 1am, narrating events as protesters angry at the killing of George Floyd massed outside.

As Vittert spoke live on air, someone can be heard in the background yelling: ‘It’s the press!’ 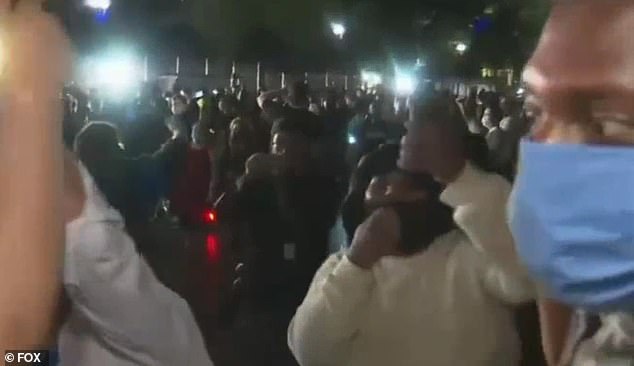 The crowd turned on Vittert and his crew, tussling with them and jeering as they tried to report 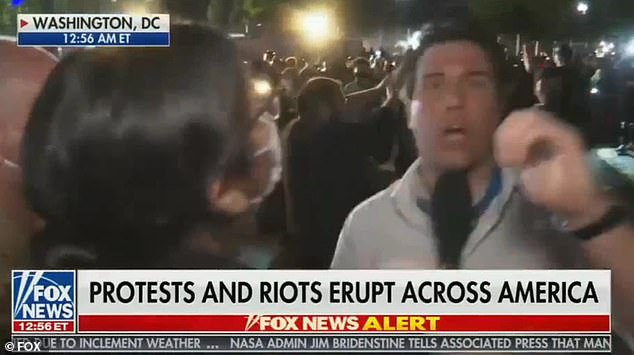 Vittert, his cameraman and two security guards left the scene, with the mob following them

He turned to show the stand-off between the Secret Service and DC police and the protesters, who by that point, he explained, had been out in the rain for seven hours.

‘The protesters have been throwing bricks, water bottles and whatever at the Secret Service, and they’ve shown an awful lot of restraint,’ he said.

The authorities were standing shield-to-shield, blocking the walls of the White House.

Shortly afterwards the crowd turned on Vittert and he was forced to flee, along with Fox News cameraman Christian Galdabini and two security guards – one of whom was punched in the face and knocked to the ground.

‘F*** Fox News!’ someone can be heard yelling, in scenes captured by a fellow reporter, working for The Daily Caller.

One man in the crowd grabbed the crew’s microphone and another tussled for the camera tripod.

Water was thrown at Vittert and his colleagues.

The four made it out of the park and found a police car some two blocks away. 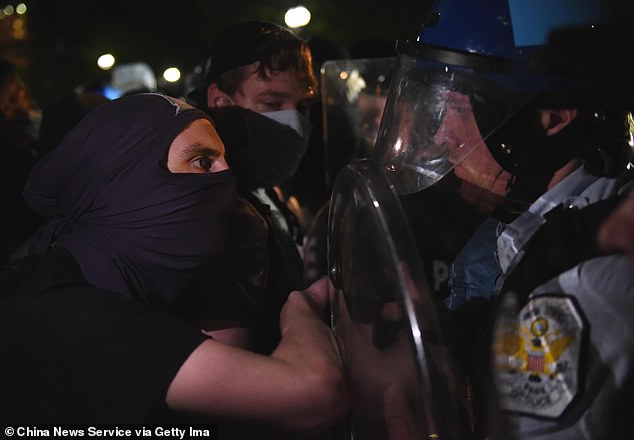 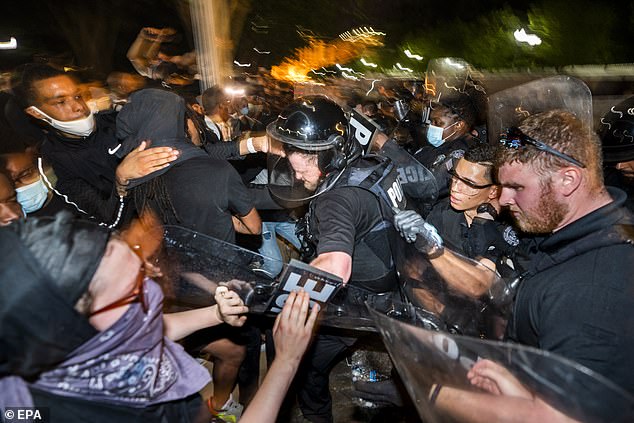 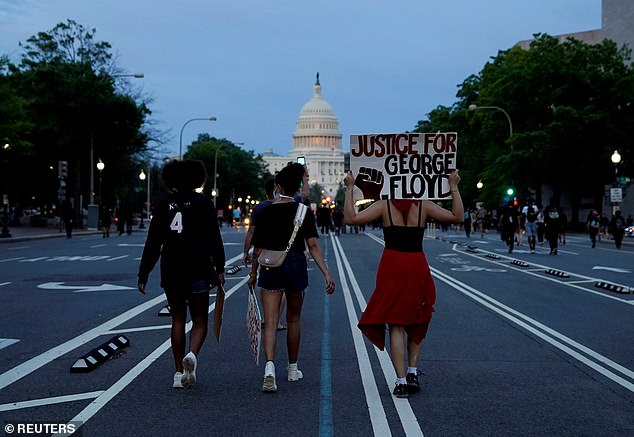 Protesters in Washington DC heading towards a demonstration calling for justice

But Vittert said the officer at the wheel refused to get out of the squad car, even as he frantically pounded on the window, surrounded by the hostile mob.

‘We were very clearly on our own, and in that situation, you just don’t know how things are going to play out,’ Vittert said.

Galdabini, who has covered violence in Iraq and Afghanistan, said the officer appeared to radio for reinforcements, and riot police soon showed up to restore some semblance of order.

‘It was a wild one,’ said Galdabini, who staved off an attempt to steal his camera as he was was doused with water and hit with objects.

‘In the park, you could feel the mob mentality taking over. There were no cops anywhere. There was nobody there to keep things calm and it got out of hand.’

Vittert praised the security team for helping guide the team to safety.

‘I’m also grateful that the Daily Caller and some of the other organizations were able to follow the mob and document it. I really appreciate that they had our backs.’

The protest began about 10pm on Friday night and the scene had mostly quietened down by 3:30am on Saturday.

Donald Trump on Saturday morning recounted watching the protests outside the White House with glee, saying that anyone who successfully breached the barriers would have been ‘greeted with the most vicious dogs, and most ominous weapons’.

Mr Trump tweeted that he had been impressed by the Secret Service handling of the unrest, and said that he was told by his security detail that the young officers in particular ‘love it’ when confronting demonstrations.