France and Germany have got public transport up and running so why can’t TfL?

Londoners will face an uphill battle to return to work tomorrow as coronavirus lockdown measures are eased – with the city’s public transport network lagging behind its European counterparts.

In Paris, commuters were greeted on to the city’s metro system by workers offering free face masks and hand sanitizer as measures were eased on Monday – while platforms were lined with masked staff enforcing strict social distancing measures.

Meanwhile in Berlin, all train, bus and ferry services have been running a full timetable since May 4 – the first day measures were eased – with workers encouraged to use the system for regular journeys.

In the UK people who cannot work from home are being encouraged to return to their jobs from Wednesday, but TfL bosses have urged them to avoid public transport ‘wherever possible’ as the network appeared far from ready to handle a surge. 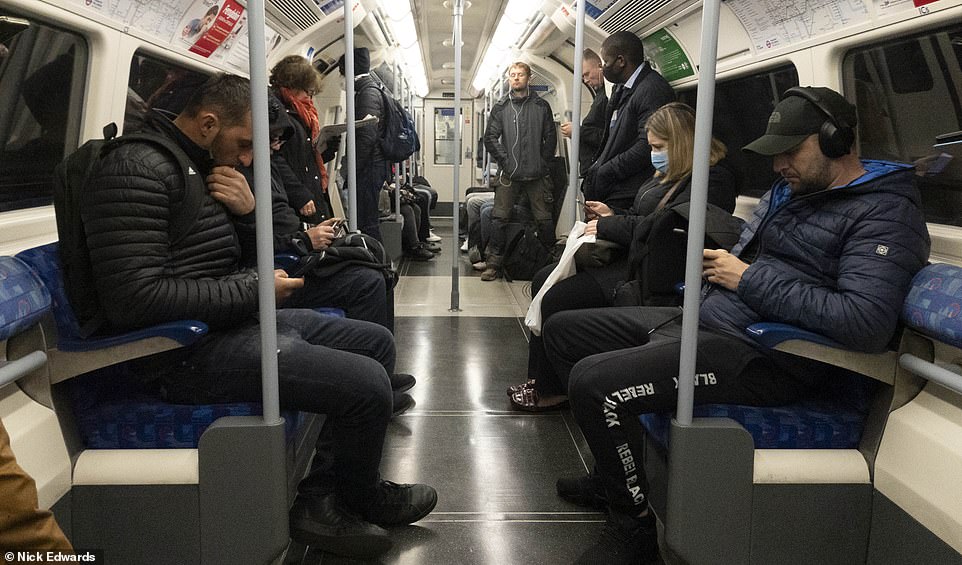 Train carriages appeared to have little or no signage telling people were to stand or sit to maintain social distance, while few people appeared to be wearing masks on Tuesday 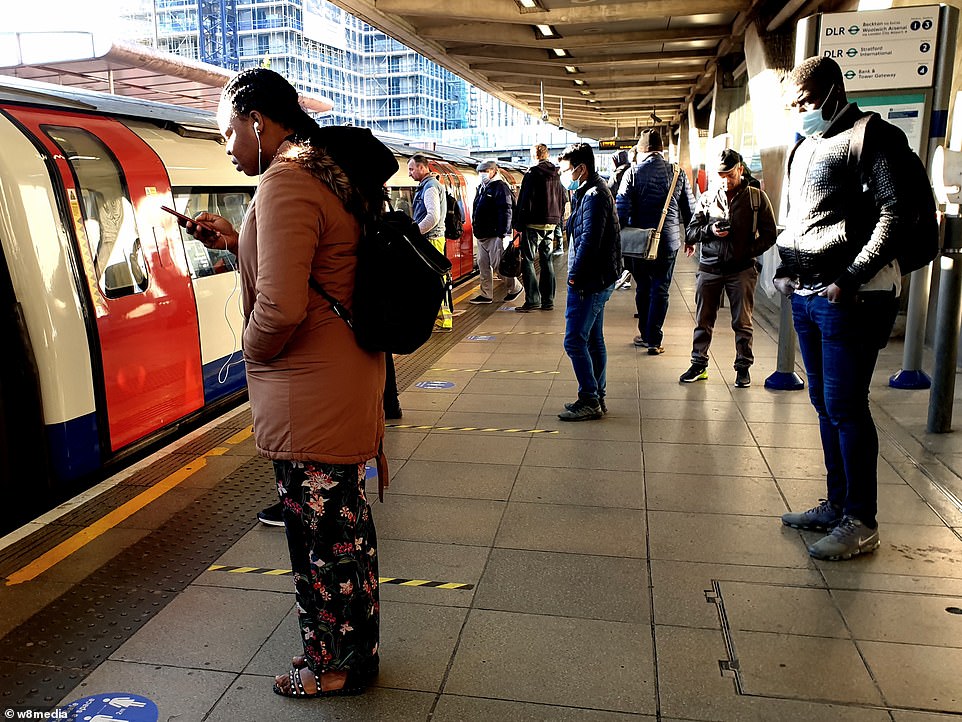 While stations had a small amount of floor stickers showing people where to stand on the platform, there appeared to be a limited amount of signage elsewhere 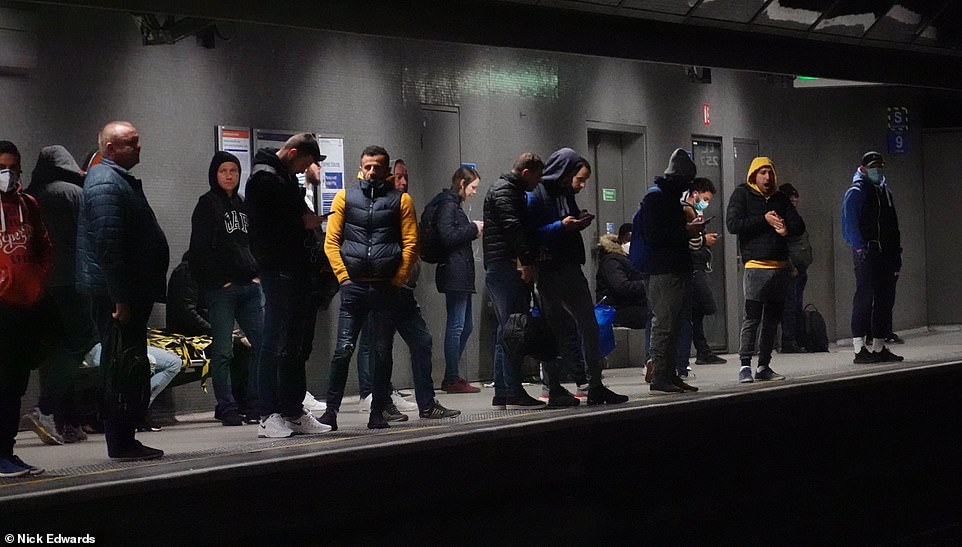 Commuters attempt to maintain social distancing on London’s underground, with one seat taped off to stop people sitting down (left) but little other signage and few people wearing masks

Images from stations across the capital on Tuesday showed how passengers were left cramped on to platforms with only a small amount of tape and floor stickers on the platform edge showing them where to stand.

On the trains themselves, there appeared to be no guidance for people on where to sit or how far away from the next person they should be.

There also appeared to be few or no staff on station platforms ensuring that guidance such as maintaining a 6ft distance and wearing a mask was being followed.

MailOnline has contacted TfL to establish what, if anything, will change tomorrow as more people are encouraged to use the network – but did not receive a response before the time of publication.

Exacerbating the crowding issue is the fact that only 60 per cent of tube services are currently running across London, with 40 stations closed including the entirety of the Circle Line.

While TfL bosses insist they will return to running 100 per cent of services ‘as soon as possible’, the situation is not expected to change within the next 24 hours.

Even when all services are operating as normal, bosses warn capacity will be reduced to just 15 per cent because of the need to enforce social distancing.

Unlike in Paris and Berlin, the latest TfL guidance urges workers to avoid public transport ‘wherever possible’ and instead ‘reimagine’ their journeys by walking or cycling. 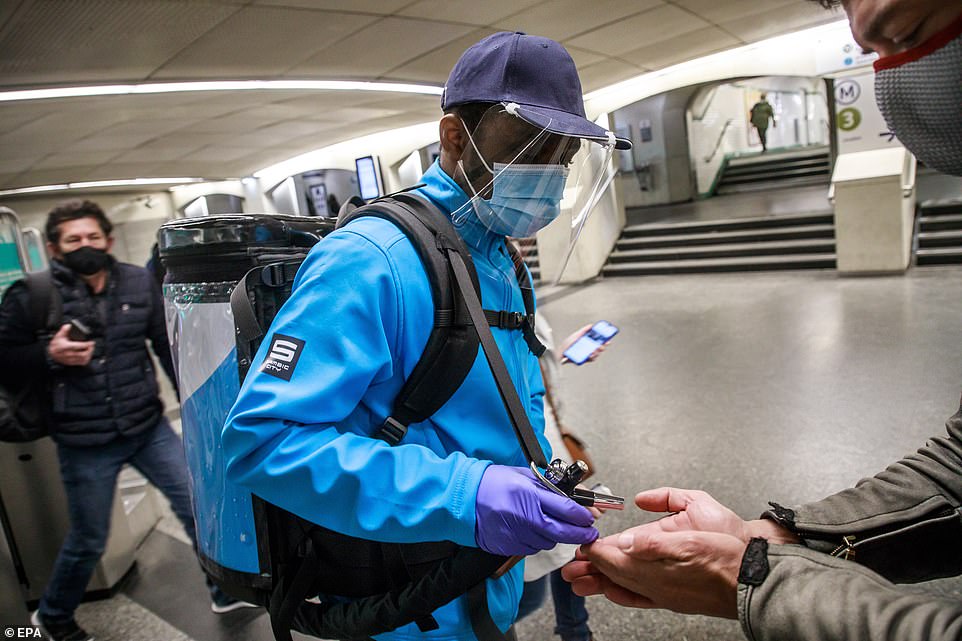 In Paris, the metro has continued running 75 per cent of services compared to London’s 60 per cent, while staff were handing out free hand sanitizer to commuters as stations reopened on Monday 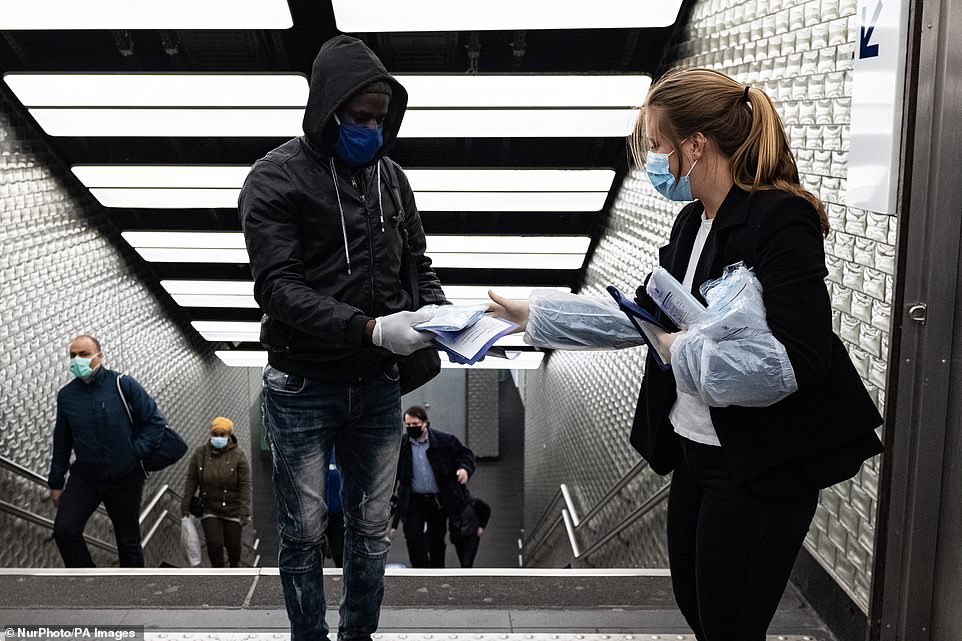 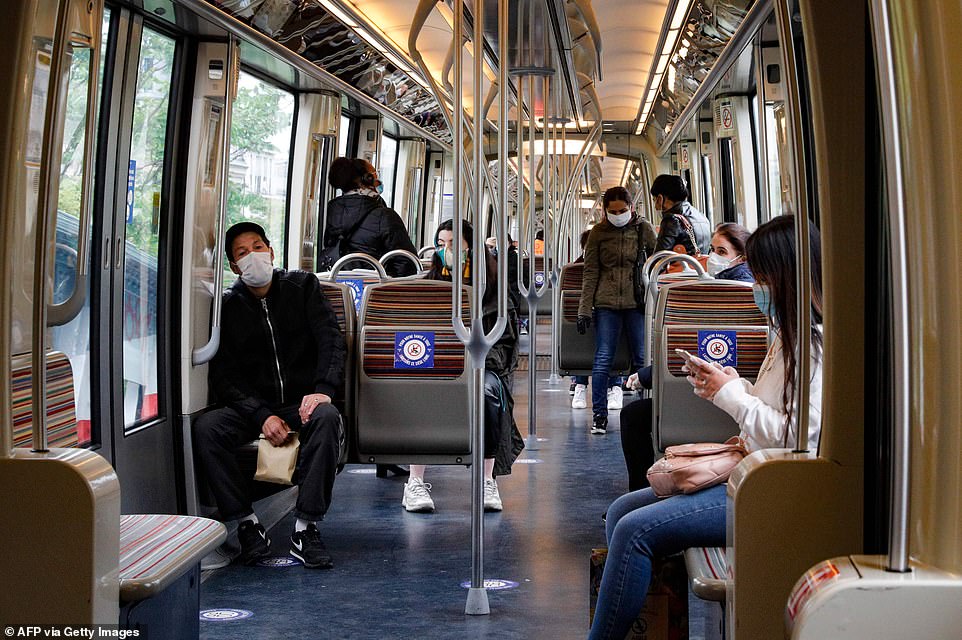 Metro trains have been plastered with stickers showing people where to stand and sit to maintain social distancing, while almost all commuters appeared to be wearing face masks 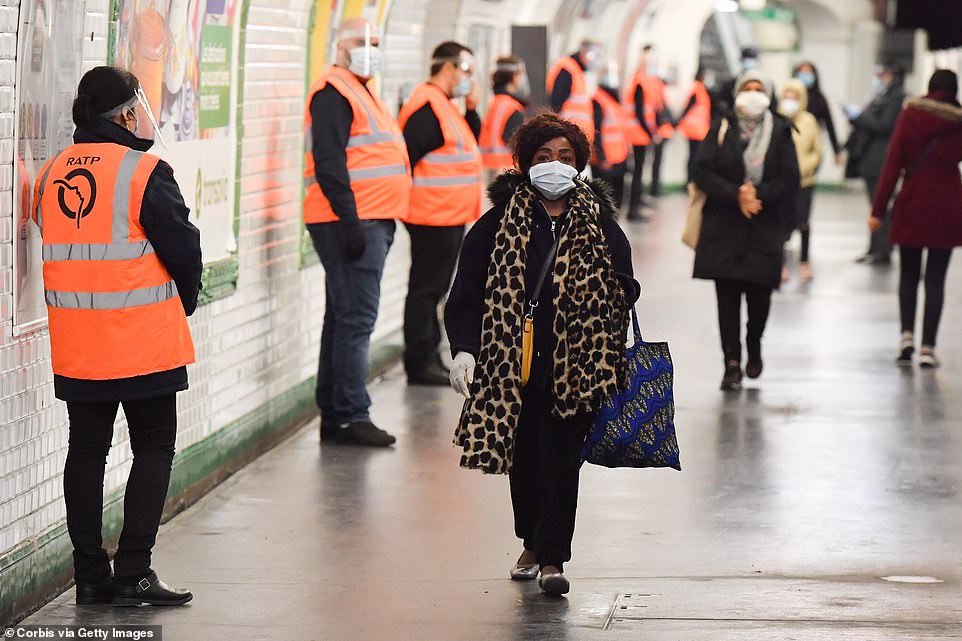 Plenty of staff were on hand at metro stations, including this one at Saint-Lazare, to ensure people were wearing face masks and adhering to social distancing rules

Meanwhile the RMT, the union which represents transport workers, has threatened staff walkouts over working conditions – saying it has ‘no confidence’ in how the government is easing lockdown measures.

Compare that to the German capital, where the city’s BVG has been running a full schedule on all tube, bus and ferry services for more than a week, with few restrictions.

Passengers are required to wear face coverings and stay 5ft apart, must buy tickets online, and cannot use the front doors of buses.

But, unlike London, they are being encouraged to use the service for regular journeys to work.

BVG is asking workplaces to offer flexible hours in order to reduce pressure at peak times, but has stopped short of restricting travel.

KVG, the transport service for Cologne which has been among the fastest to ease lockdown restrictions, a full service including night trains resumed on May 11.

In Paris, the city’s RATP network is also encouraging passengers back – and boasted of running 75 per cent of services on Monday, the first day restrictions were eased.

Measures are more severe than in Berlin – with commuters required to have a permit to travel at peak times, and with around 60 stations closed or restricted. 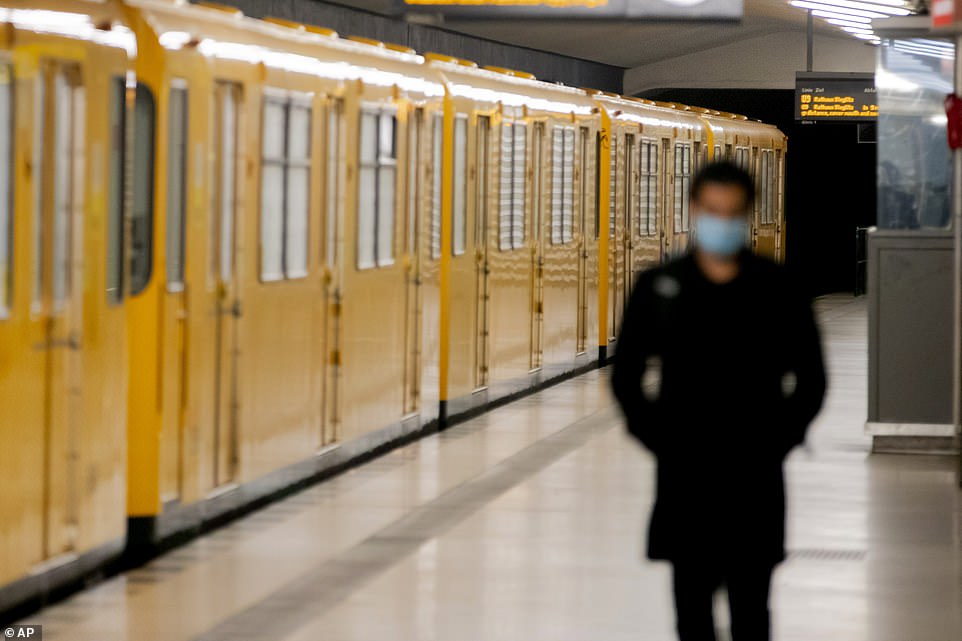 Berlin’s BVG network (pictured) and Cologne’s KVG network have both been running regular schedules since May 4 and May 11 respectively, while commuters have been encouraged to use them for regular journeys

Commuters are also required to wear masks and maintain social distancing, and must buy tickets online or via text to limit face-to-face contact with staff.

But safety precautions appear to be far beyond what is being offered in London, despite warnings from the city’s typically-outspoken rail union that there has been crowding in some places.

Images showed metro stations lined by masked attendants enforcing social distancing, while stickers were plastered across train platforms giving people lanes to walk in and telling them where to sit to enforce distancing.

Meanwhile trains themselves also had stickers on seats and the floor to show people where to stand and where they cannot sit to ensure the gap is maintained.

Workers carrying large tanks of sanitizer on their backs offered it to commuters for free, while others handed out face masks to people leaving the platforms.

TfL says it plans to introduce sanitizer points at every tube and rail station ‘over the coming weeks’, but it is not clear how many will be ready for workers to return on Wednesday.

European countries, which have borne the brunt of the coronavirus pandemic with 1.7million cases and more than 150,000 deaths on the continent, are now trying to ease their way out of lockdowns that have suppressed the virus but devastated their economies.

Italy, Spain, France and Germany – among the countries with the most cases and deaths – have all loosened restrictions in the past week. 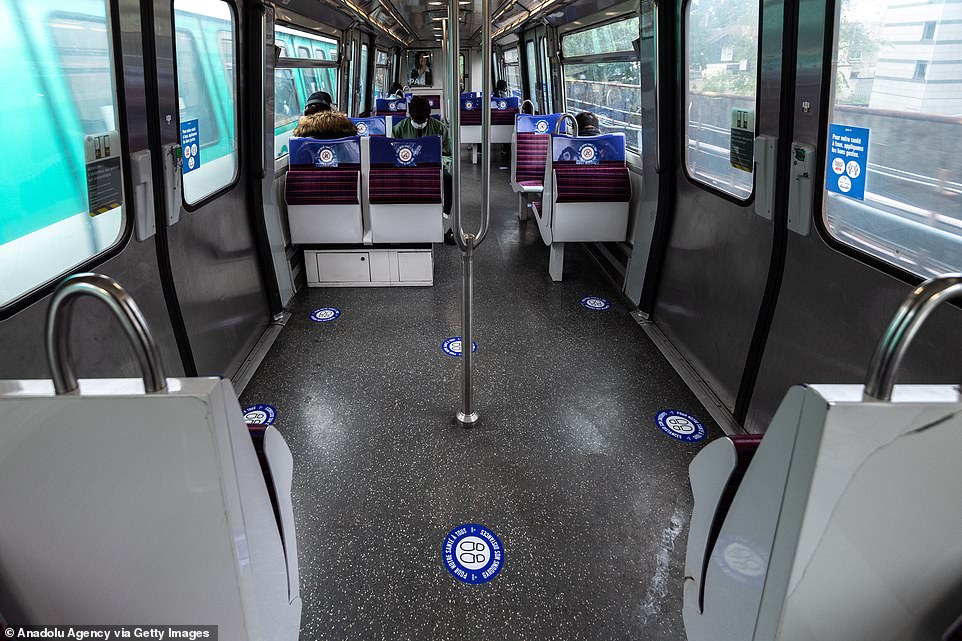 The inside of a French metro train with stickers showing where people can stand, and where they shouldn’t sit in order to maintain social distancing 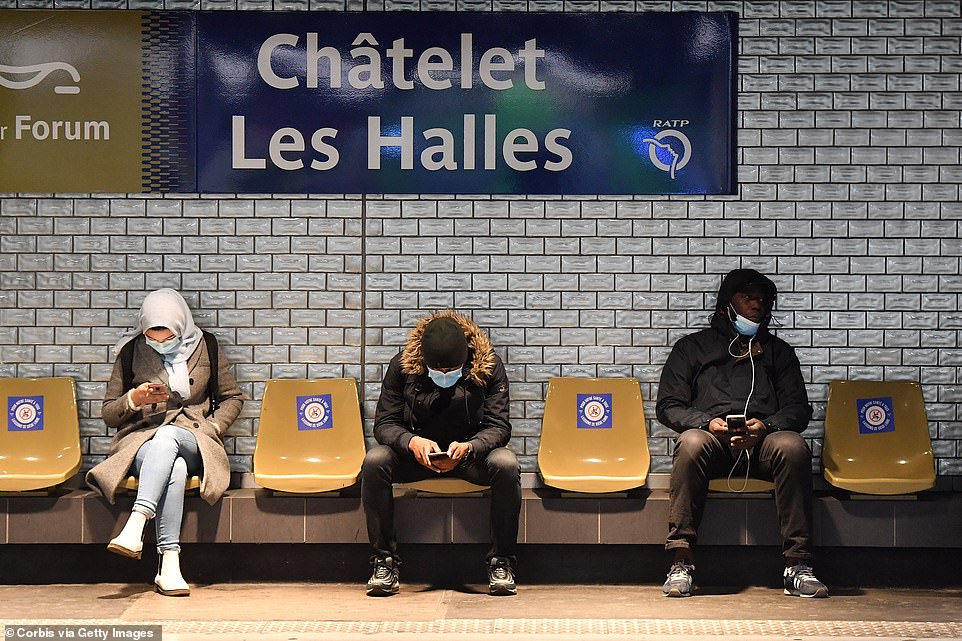 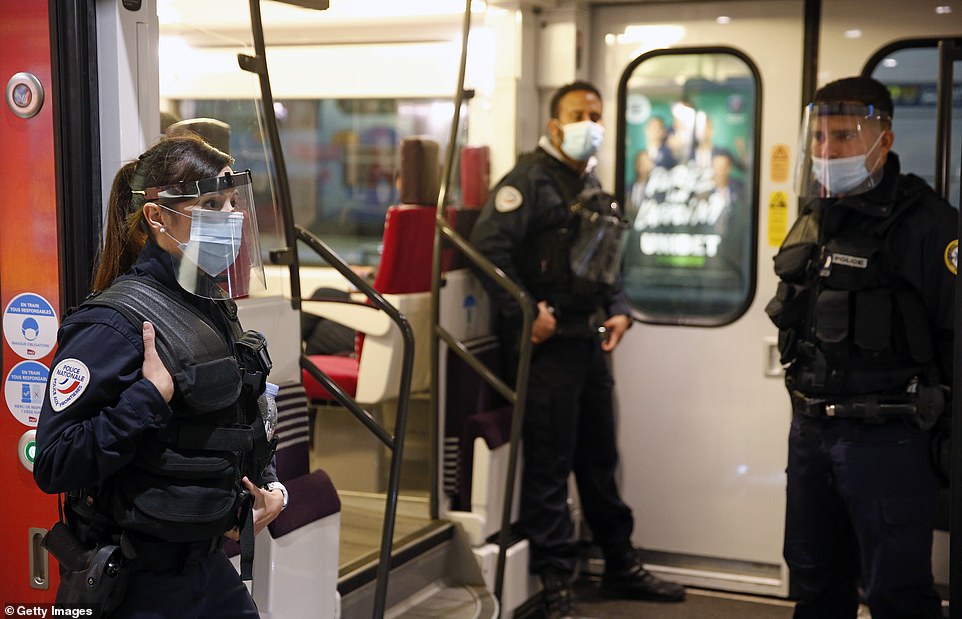 The UK, which has the most deaths of any country in Europe, is due to follow suit on Wednesday – though will take a far slower pace than its compatriots.

From Wednesday, everyone who cannot work from home is being encouraged to return to their workplaces while limits on outdoor exercise have been lifted.

People are also allowed to meet one person from outside their household and can linger in public places such as parks, but cannot meet at home or gather in groups.

Italy, Germany, Spain and France have all implemented piecemeal restrictions which vary depending on local transmission of the virus – but most go well beyond the UK’s measures.

In Germany, gyms, pubs, restaurants and cafes have been allowed to reopen in some states, while Spain has allowed cafes and diners to open their outdoor seating areas.

Italy has allowed people to travel freely around their home regions while most retail businesses are expected to reopen on March 18.

In France, people living in low-risk areas are allowed to travel freely within 60 miles of their home – including meeting people inside their homes. 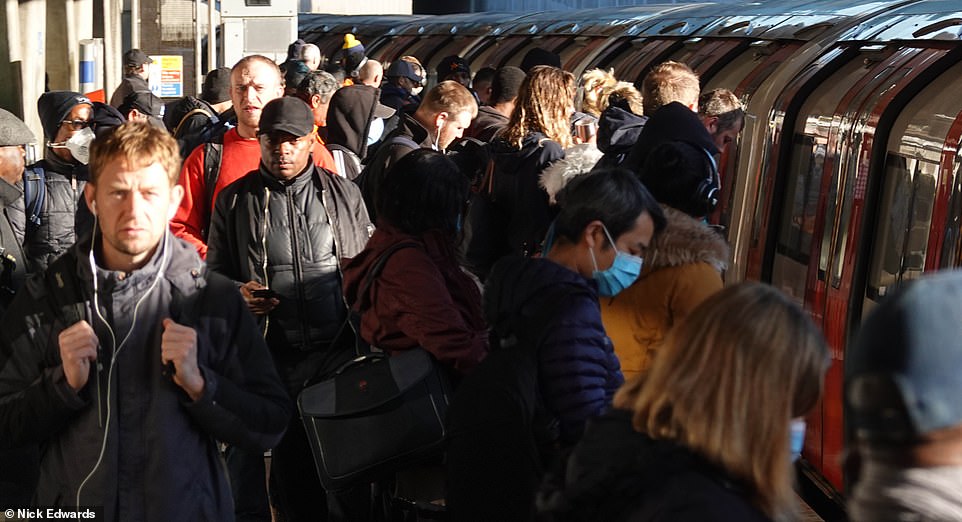 Passengers – many of whom were not wearing face masks – cram on to the platform at Canning Town underground station in London on Tuesday morning, ahead of an expected surge on Wednesday 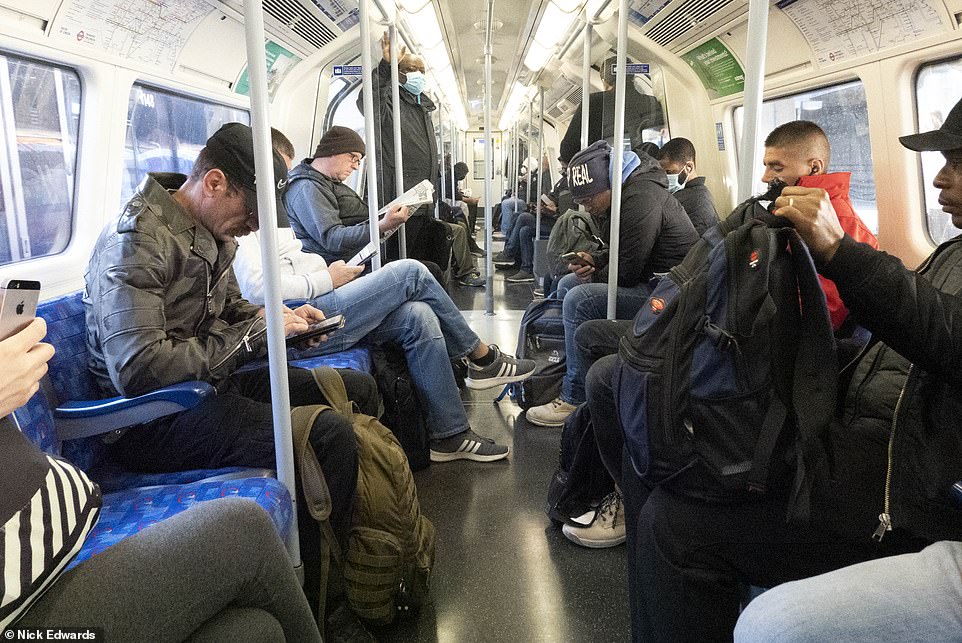 Passengers attempt to social distance by sitting one seat apart on an underground train, though without floor markings showing them the appropriate distance 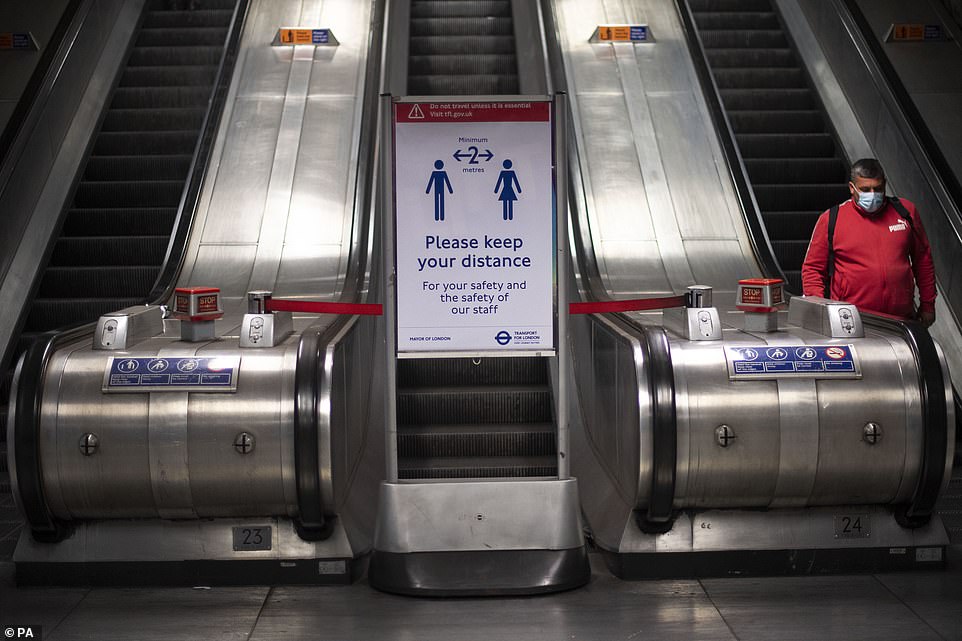