Paris will be under curfew on New Year’s Eve, France’s Prime Minister said tonight as he announced a series of tough new coronavirus measures.

Jean Castex said the City of Light would be in darkness on a night traditionally associated with parties and fireworks.

It is all part of a nationwide curfew across France which starts next Tuesday, December 15, when everyone will have to stay at home from 8pm until 6am.

The only exception will be Christmas Eve, when people will be able to go out, but only in small groups.

Mr Castex said: ‘Christmas occupies a special place in our lives and our traditions…We therefore authorise travel for this evening of December 24, but by reminding you the rule I gave you last week – no more than six adults at a time.’

Explaining why this was necessary during a live TV address about the Coronavirus crisis on Thursday night, Mr Castex said: ‘We are not yet at the end of this second wave and we will not be on December 15.’

Mr Castex said this was the date when the objective had been to get ‘below 5,000 new Coronavirus cases per day,’ but this had not happened.

‘The curfew will be strictly controlled with only limited possibilities for exemptions,’ said Mr Castex.

‘The establishments which we had planned to reopen on December 15, will remain closed for three more weeks,’ said Mr Castex, referring to theatres, cinemas, concert halls, museums, zoos and casinos.

On Wednesday of this week, 14,595 new cases of Coronavirus were recorded in France – the highest figure since November 25.

When the second lockdown was announced at the end of October, there were about 60,000 new cases per day, but the new figures are still considered too hight. 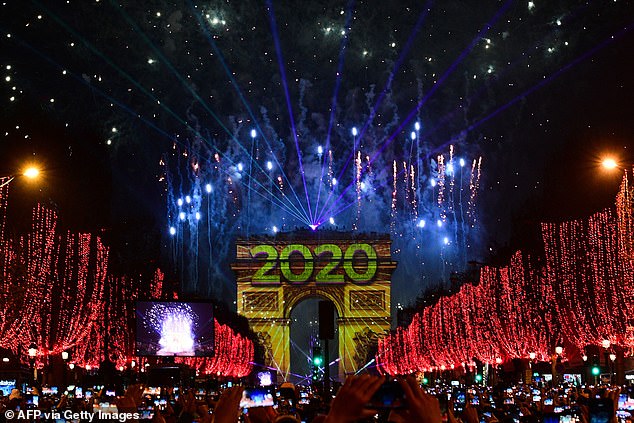 He said this year the City of Light would be in darkness on a night traditionally associated with parties and fireworks. Pictured: New Year’s celebrations at the Arc de Triomphe in Paris last year

President Macron had set the threshold of 5,000 cases per day as the target to proceed with an end to lockdown.

Mr Castex said: ‘The health situation has improved considerably in recent weeks. In France, the epidemic is now better controlled compared to our European neighbors.

‘But this improvement has stalled for a week. The number of new contaminations is no longer reducing and it has even tended to increase slightly over the past few days. The game is therefore far from won.’

France’s Coronavirus incidence rate, which measures the level of Covid-19 cases per 100,000 inhabitants, has increased to 107.5 after dropping below 100.

Shops in France have reopened, but social gatherings are not allowed and an attestation (permission form) is still needed for every trip outside the home.

Senior health official Jérôme Salomon said earlier this week that France was ‘still far off’ from its health objectives and ‘faced with a high risk of epidemic) rebound’.