France holidays: Discover why A-listers have always fallen in love with the Cote d’Azur

For more than a century, the Cote d’Azur has been an Anglo-American enclave of the most gilded kind. Staying in small hotels then building villas, the literati and glitterati sets created concentric circles of wealth and glamour, sandwiched between the hills of Provence and the Mediterranean.

Queen Victoria wintered here, while her son Edward VII nipped over to play the casino tables. Above all, they dedicated themselves to sheer, unsullied enjoyment of life, nature and delicious food.

The epicentre of this heritage is the Hotel du Cap-Eden-Roc on Cap d’Antibes. It’s one of those rare hotels that really does live up to both its history and hype – almost exactly 100 years ago, F. Scott Fitzgerald used it as inspiration for the fictional Hotel d’Etrangers in his novel Tender Is The Night, catching a mix of the hedonism and nihilism of the Belle Epoque 1920s when du Cap’s real-life guests included Ernest Hemingway and Cole Porter.

Well-heeled: The stunning cliffside Hotel du Cap-Eden-Roc on Cap d’Antibes is a legendary celebrity playground of the Cote d’Azur – a region that has been an Anglo-American enclave of the most gilded kind for more than a century. Pictured above is the hotel’s cliffside pool, its graduated blues surrounded by the darker Mediterranean a breathtaking sight 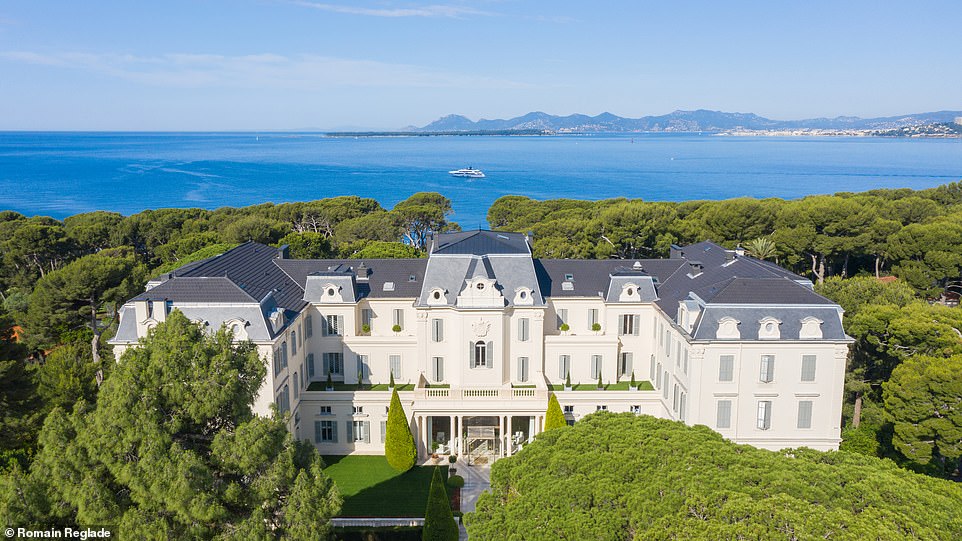 F. Scott Fitzgerald used the Hotel du Cap-Eden-Roc, pictured, as inspiration for the fictional Hotel d’Etrangers in his novel Tender Is The Night

In the 1930s, the Kennedy family summered here, with JFK’s father Joe managing to conduct an affair with fellow guest Marlene Dietrich. In the 1940s, the legendary playboy Aga Khan met and romanced Hollywood star Rita Hayworth here, while in the 1960s, Richard Burton and Elizabeth Taylor cemented their torrid affair at the du Cap by returning for their honeymoon. Royalty adores the place.

Today it’s still a celebrity playground, both during the Cannes Film Festival and the summer.

Once past the gates and the security guards, there’s a sweeping approach to the cream wedding-cake mansion. Head inside and another vista opens up on the other side – a vast avenue between pine trees and palms is revealed with the Mediterranean beyond. 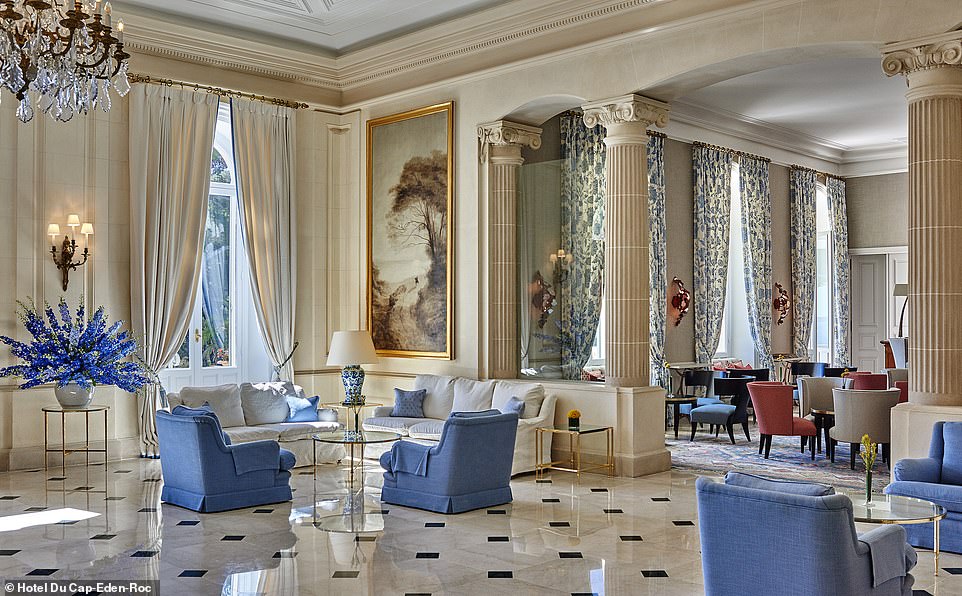 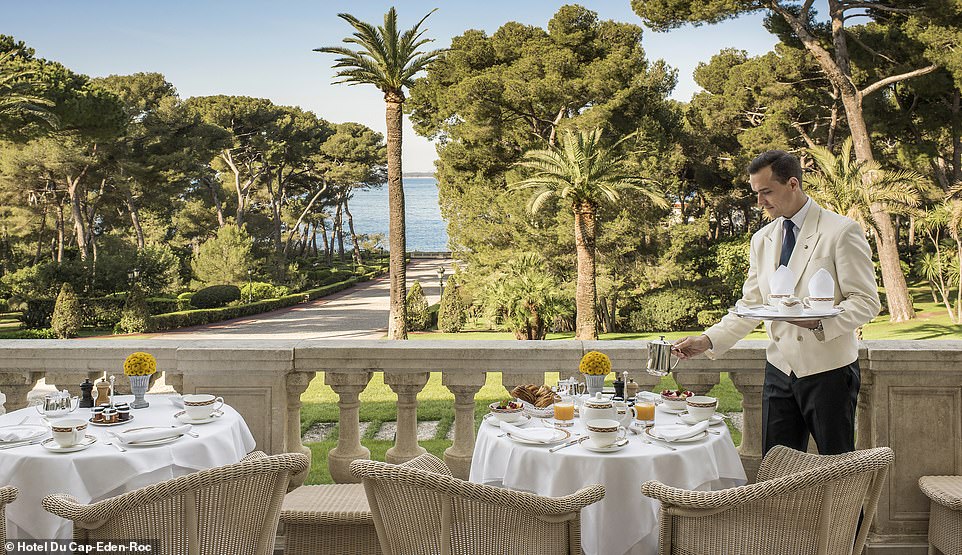 The terrace at Hotel du Cap-Eden-Roc. The property is one of those rare hotels that really does live up to both its history and hype 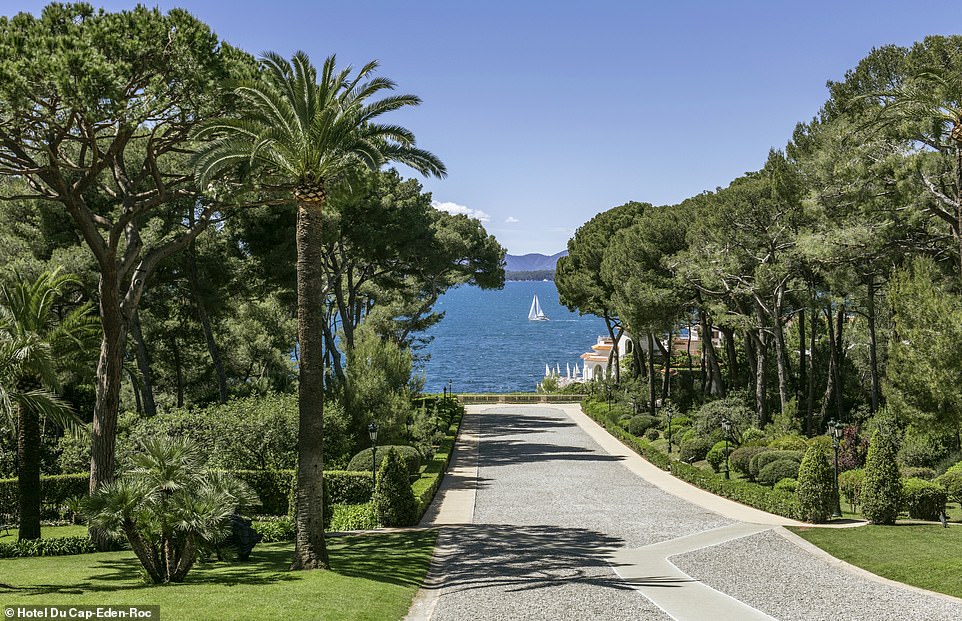 On one side of Hotel du Cap-Eden-Roc, there’s a vast avenue between pine trees and palms with the Mediterranean beyond

To one side there are clay tennis courts, and on the peninsula the same simple wooden cabanas that the Kennedys colonised. But above all there’s space and serenity.

These hotel gardens are so rarified that Dior paid homage by creating the Eden-Roc fragrance last year, blending a salty tang of Mediterranean citrus and pine with roses from the garden planted by Lady Onslow, who, alongside her husband, helped finance the hotel in its early days.

The rooms defy fashion in a ridiculously pleasing way. In the main building, chintz mixes with full French charm, with windows and balconies overlooking the gardens and the sea. 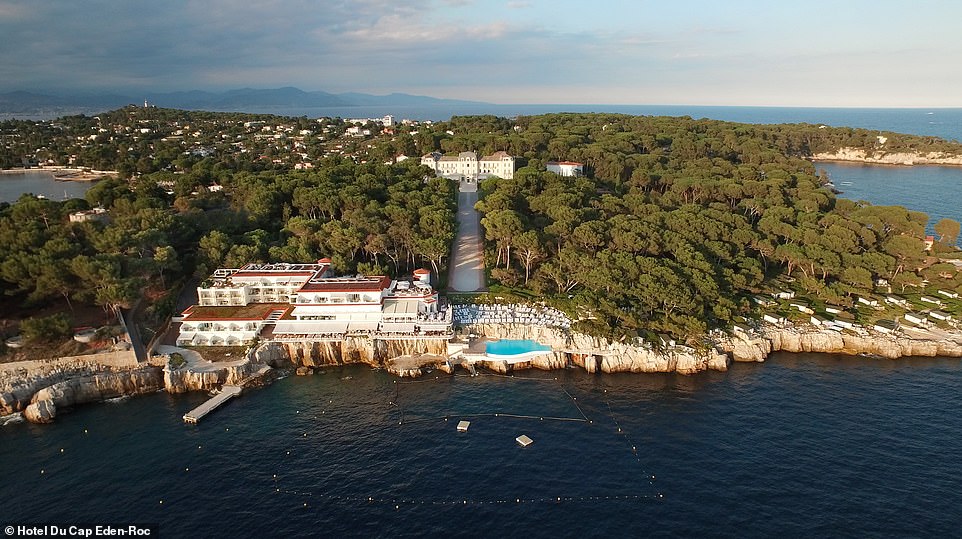 Merely gaining entrance to Hotel du Cap-Eden-Roc, above, feels a bit like winning an Oscar, or at least being in a very stylish French film

Elsewhere (and the hotel has 22 acres to play with) there has always been plenty of panache, including a swimming pool carved out of the cliff. Its graduated blues surrounded by the darker Mediterranean is still breathtaking.

Merely gaining entrance feels a bit like winning an Oscar, or at least being in a very stylish French film. During daytime by the pool, the waiters wear white chinos and breton tops as they dispense wine to your sunlounger. In the evening, bartenders wear white jackets at the Bar Bellini.

Lunch at the Eden-Roc Grill is a refined exercise to get a table as close to the water as possible for tuna tartare, salads and very superior burgers. 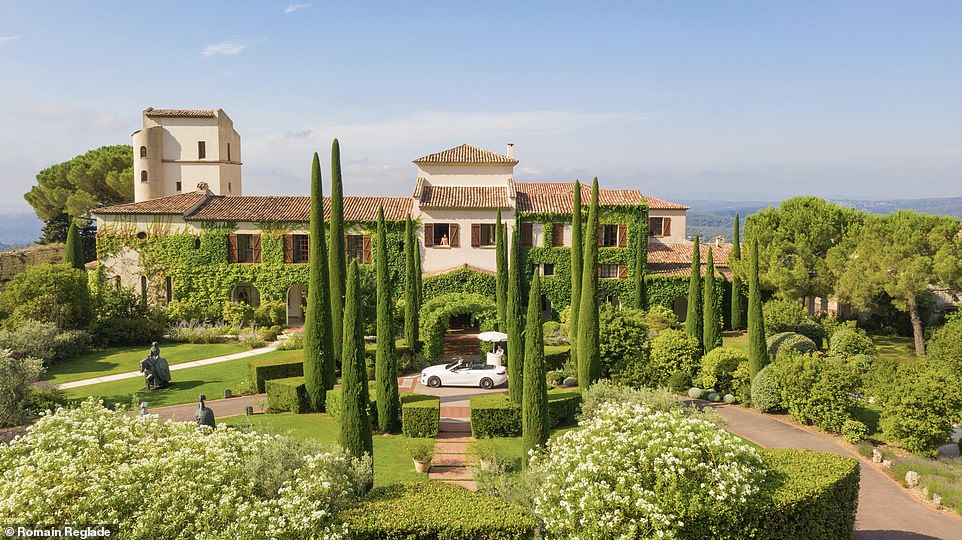 Chateau Saint-Martin in Vence, pictured, is the du Cap’s sister hotel with its own Michelin-starred restaurant

Booking in to Hotel du Cap-Eden-Roc is not particularly easy, even for the super-rich. Its doors close between October and April and, with just 117 suites, it’s not huge.

Recently it acquired a few surrounding villas. The newest, Villa Sainte-Anne, has five bedrooms and a pool and comes with a cabana at the hotel. Rates start at £14,000 a night, but it does include a trip on the hotel’s speedboat.

Staying at du Cap is, as you’d expect, exceedingly expensive, especially in July and August. Those in the know tend to come in June, September and October when rooms get cheaper. ‘We’ve been doing it for years,’ a French couple told me with pride. 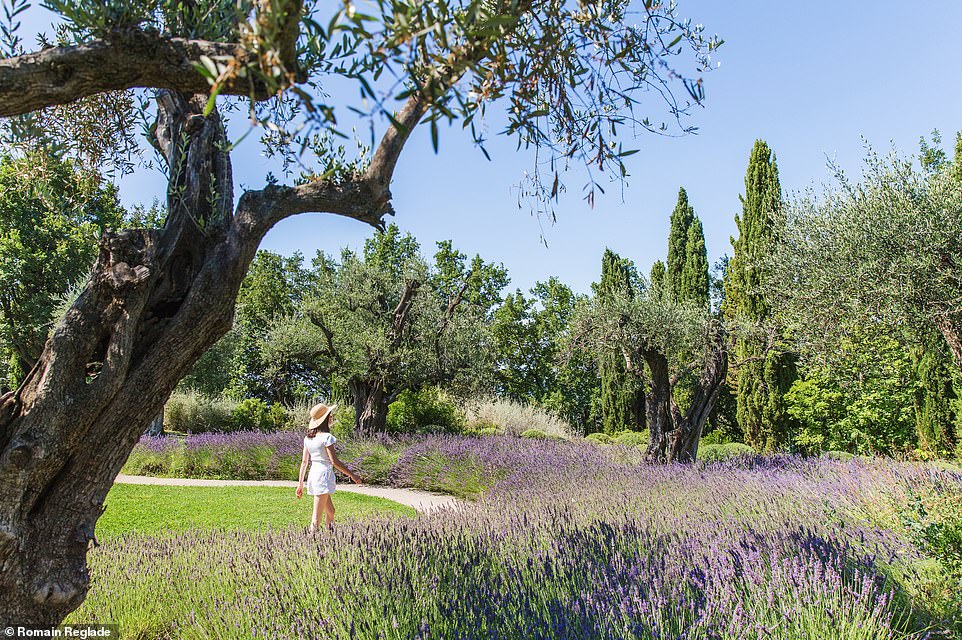 Above is a patch of lavender in Chateau Saint-Martin’s gardens. In the morning, the hotel’s honey comes from its jasmine-scented grounds 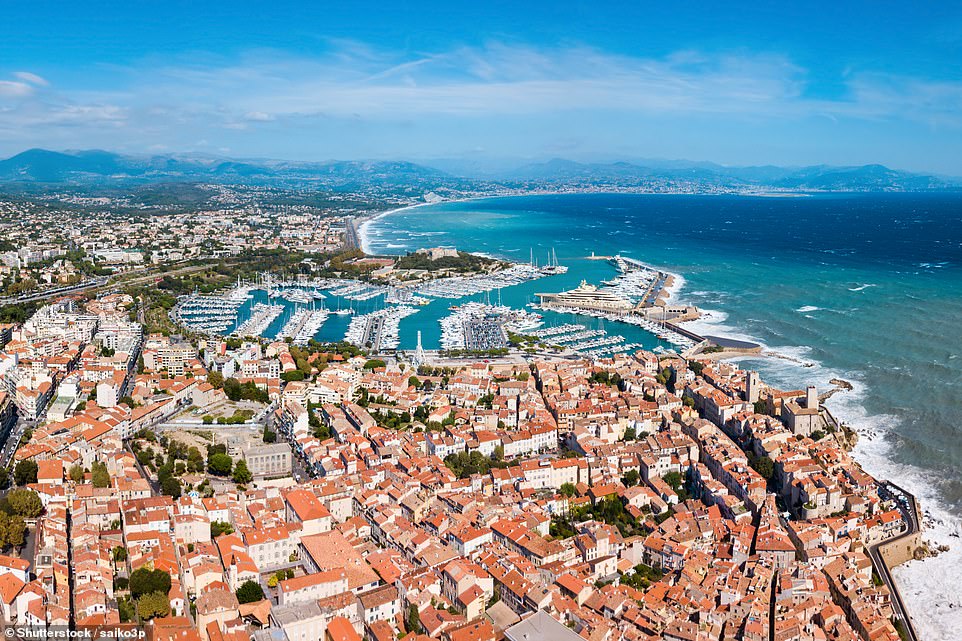 From Chateau Saint-Martin, head to local markets to pick up early strawberries and asparagus. There’s a daily market in Antibes (pictured) 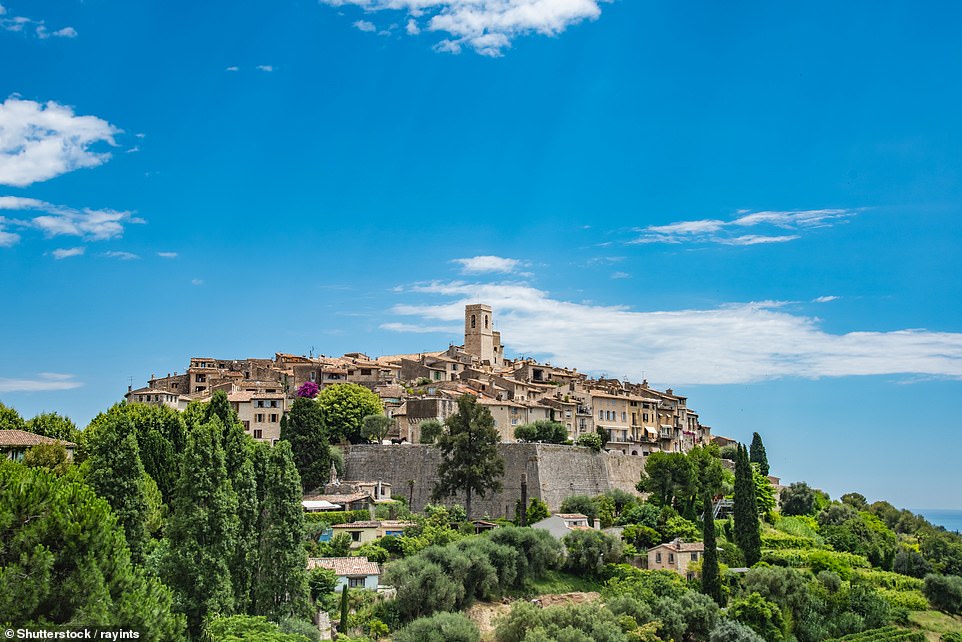 On Friday mornings, make it your mission to explore the market at Saint-Paul de Vence (pictured)

There’s another way to secure your place on the sunloungers, though, or a meal in its restaurant. Chateau Saint-Martin in Vence, where the South of France meets Provence, is the du Cap’s sister hotel with its own Michelin-starred restaurant. But stay at the Chateau and you also get guaranteed entry to Hotel du Cap-Eden-Roc, which is a swift 30-minute drive away.

Originally the Chateau was a castle built by Knights Templar and taken over by crusaders – you can still see its ruins and 13th Century vaults. In the morning, its honey comes from its jasmine-scented grounds.

You’ll need a car to get around, but in spring the small roads weaving in and out of the villages and towns are a delight. And the local markets are at their most enticing, with early strawberries and asparagus. 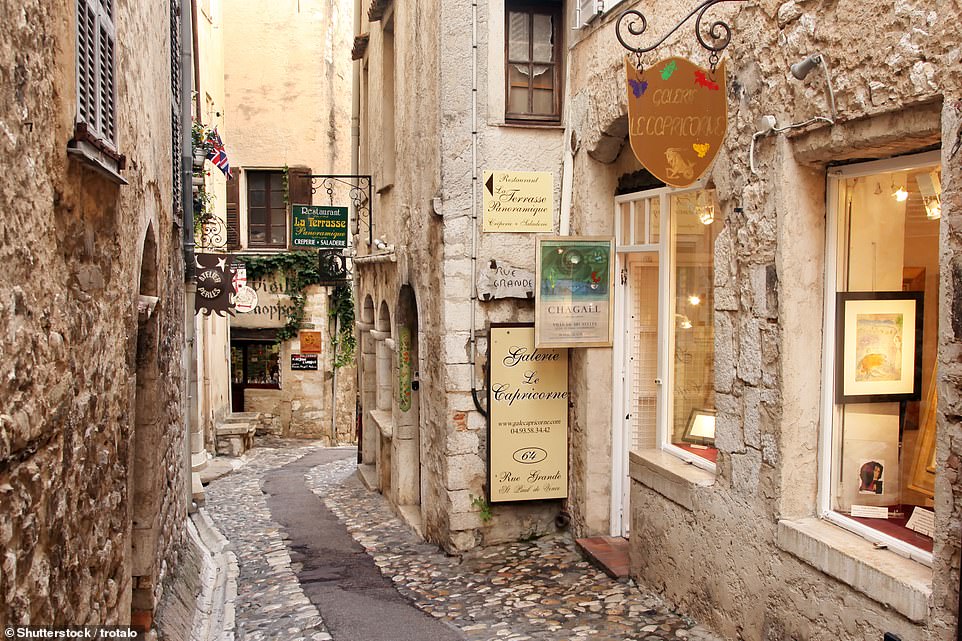 Once upon a time, you would have seen Matisse and Picasso strolling through the narrow passageways of Saint-Paul de Vence (pictured) 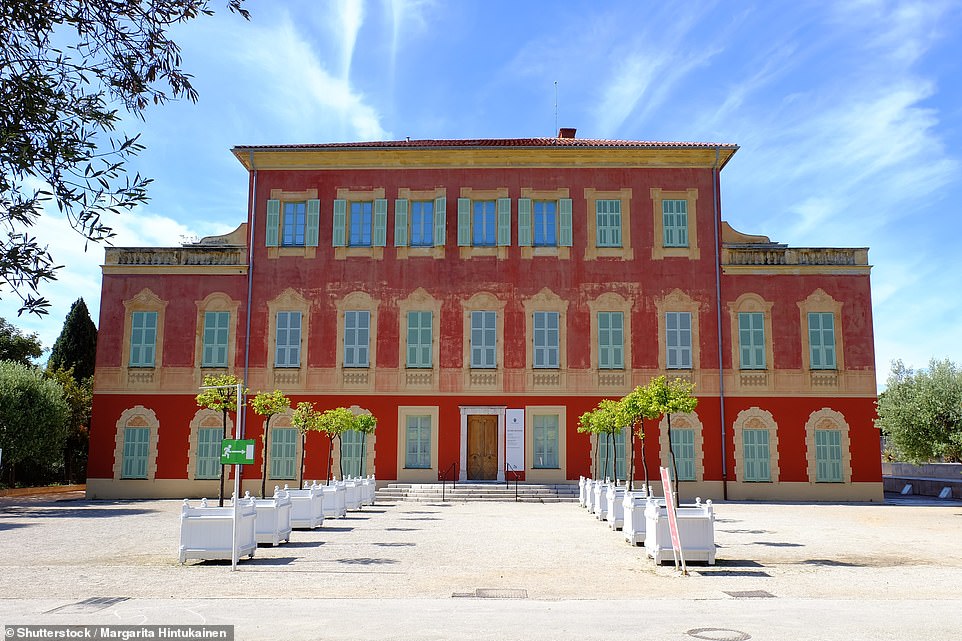 Artists like Matisse have left their mark on the region. Above is the Matisse Museum in Nice 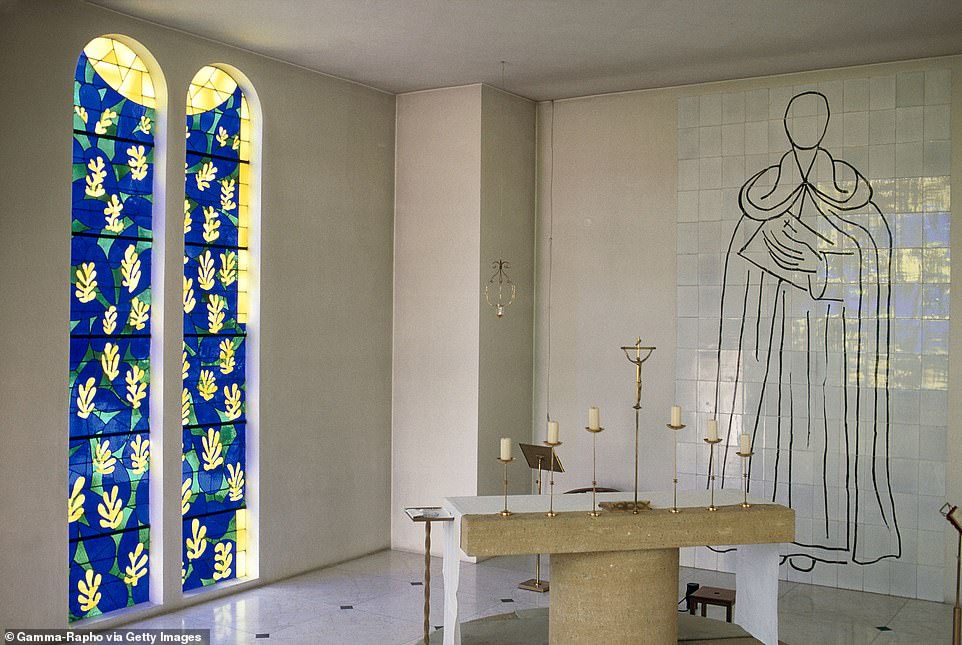 There’s a daily market in Antibes and Vence, and on Wednesday and Friday mornings at nearby Saint-Paul de Vence.

These days you may not still see Matisse and Picasso strolling through the narrow passageways of Saint-Paul de Vence, and its galleries now seem to sell only dull pop art, but the light and scenery remain, plus the boules and brasserie-based charm alongside its honeyed Provencal stone.

And the artists have left their mark on this region. Chagall and Matisse both have museums in Nice, while Saint-Paul de Vence has the Maeght Foundation that has family-friendly modern art, including a labyrinth created by Joan Miro. 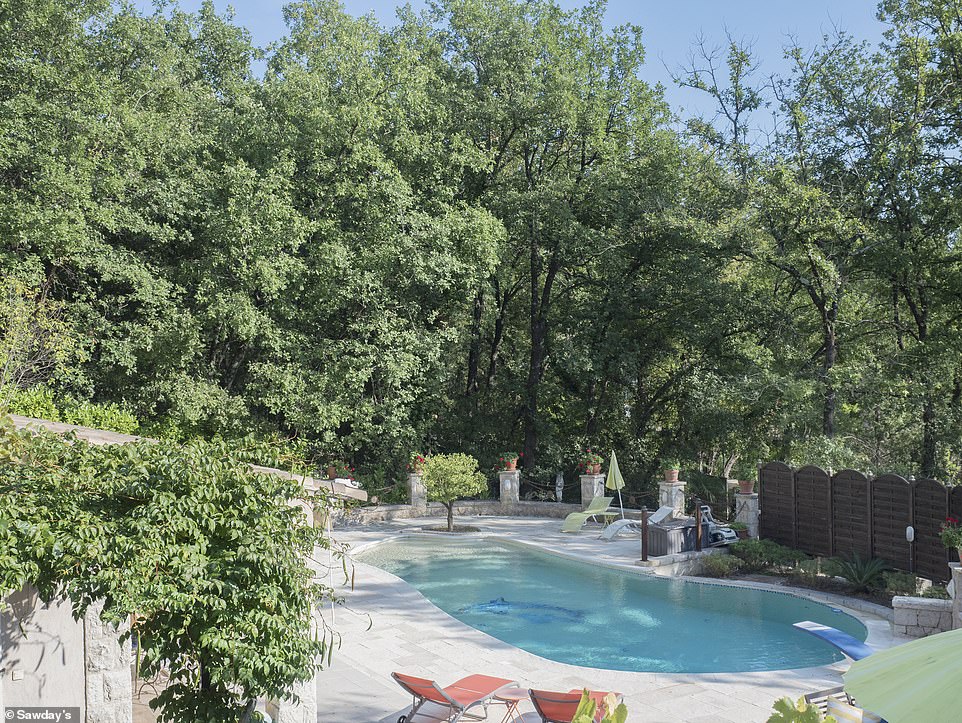 One gem of the Cote d’Azur is Villa L’Escalinado, pictured, which has a delightful swimming pool and offers staggering views across Nice 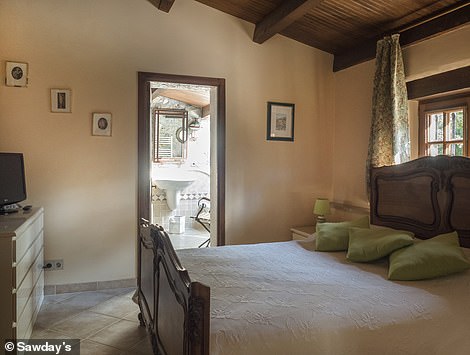 Rates at Villa L’Escalinado start at £64 a night

Most gorgeous of all is the Chapelle du Rosaire de Vence. In 1941, Matisse placed an advert asking for a ‘young and pretty’ nurse. Monique Bourgeois answered and was employed. Later, when she became a nun, she asked him to create a chapel. He took on the challenge and it’s an exercise of glorious artistic simplicity, with abstract stained-glass windows. It’s small, intimate and unforgettable.

It’s also proof that plenty of other places create impact in the Cote d’Azur, even when they are on a smaller scale, including accommodation. One gem is Villa L’Escalinado. Sleeping up to six people in a studio and house, and with a delightful swimming pool, it offers staggering views across Nice. Rates start at £64 a night (sawdays.co.uk).

Sacrifice the sense of glorious isolation and two Fresia villas, near Grasse, could suit you. While each has its own pool, they’re part of a larger resort so there are kids’ activities, a larger communal pool, a boules court, bar and restaurant. Outside school holidays, in particular, the villas, which sleep six, are reasonably priced, with a week in May starting at £1,404 (oliverstravels.com). 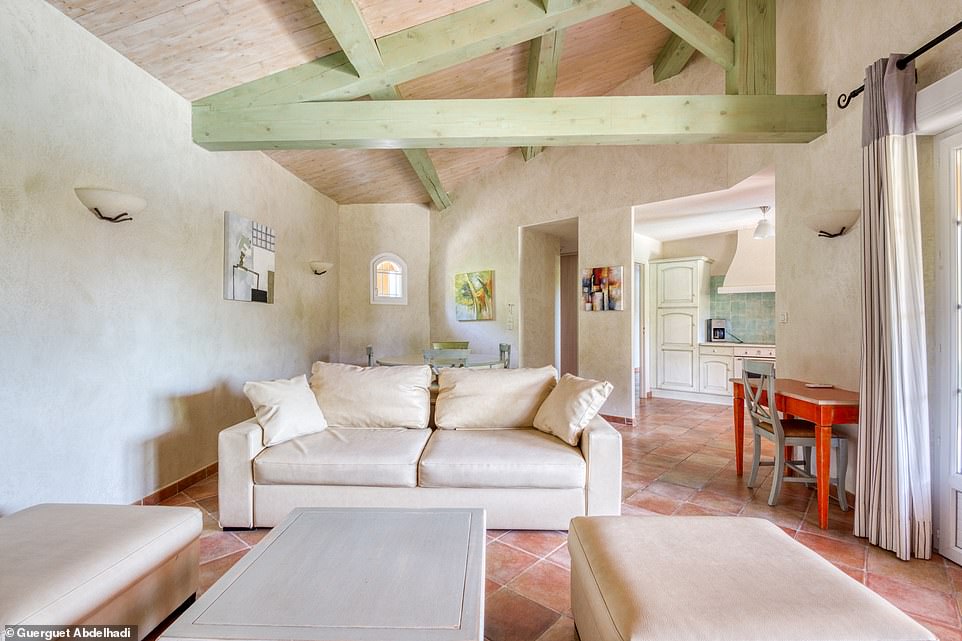 Above is Fresia I – one of two Oliver’s Travels villas near Grasse. The villa is part of a larger resort that offers kids’ activities, a boules court, bar and restaurant 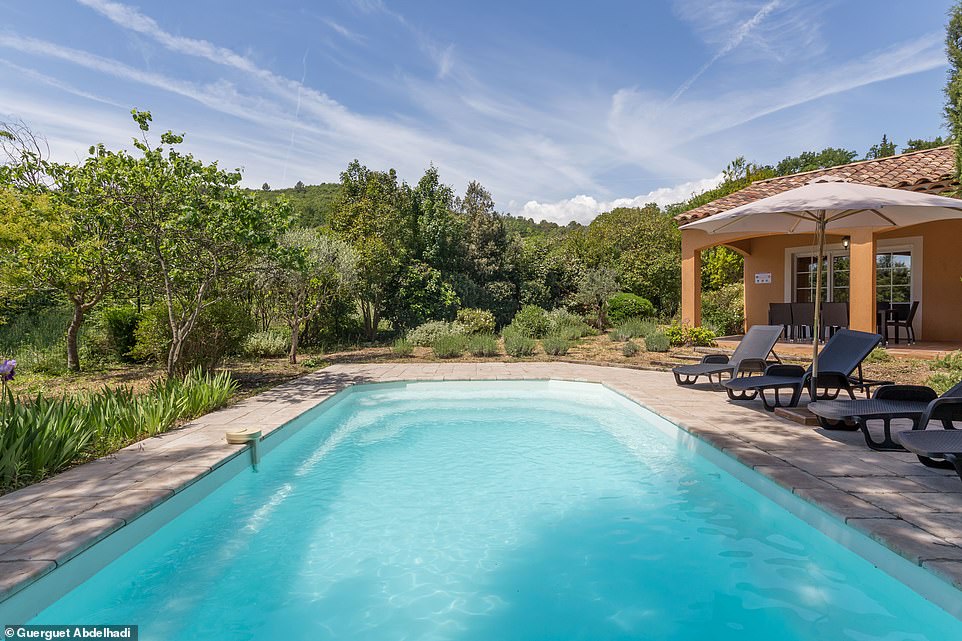 Above is the private pool at Fresia I. The villa, which sleep six, is reasonably priced, especially outside school holidays 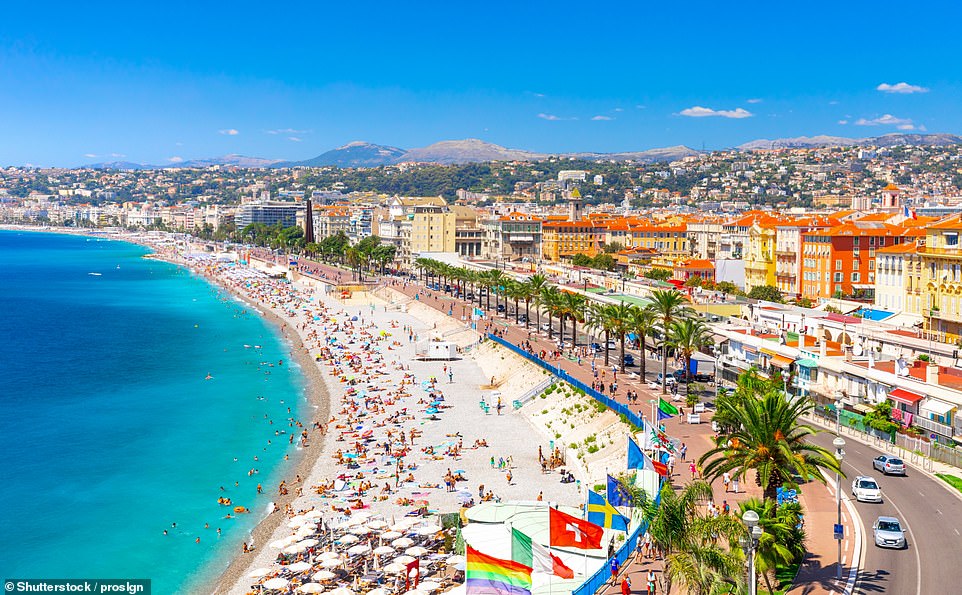 Above is the grand Promenade des Anglais in Nice, the capital of Cote d’Azur, which runs alongside its wide crescent bay

Search around and you can find some lovely little hotels in the South of France too. They may not have the space and serenity of Hotel du Cap or Chateau Saint-Martin, nor their spas and Michelin-starred restaurants, but they have delightfully affordable rates.

Nice is the capital of Cote d’Azur. Its grandest road, the Promenade des Anglais (or English Walkway), runs alongside its wide crescent bay.

The Hotel Windsor, another telling tribute to the region’s history as a favourite among well-heeled British tourists, also acknowledges the Cote d’Azur’s artistic heritage, with most of its 57 rooms decorated with murals. Room-only doubles cost from £127 per night (i-escape.com). 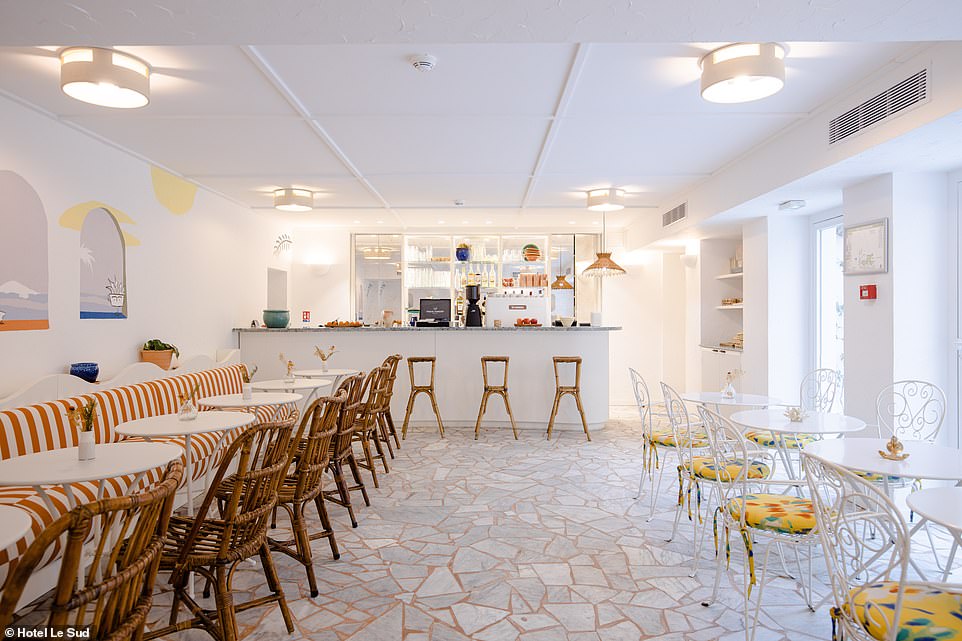 Antibes has a budget hotel – Hotel Le Sud, pictured above, which opened in 2020 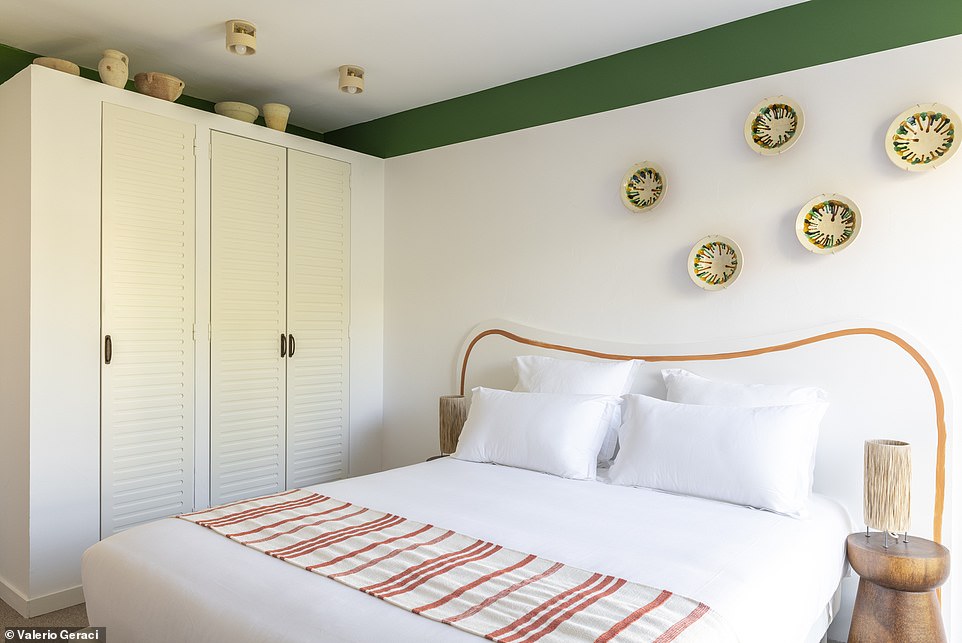 Hotel Le Sud’s designer has taken inspiration from the artists and early guests at the Cote d’Azur with a light, unfussy decor, filled with ceramics and an easy sense of nostalgia 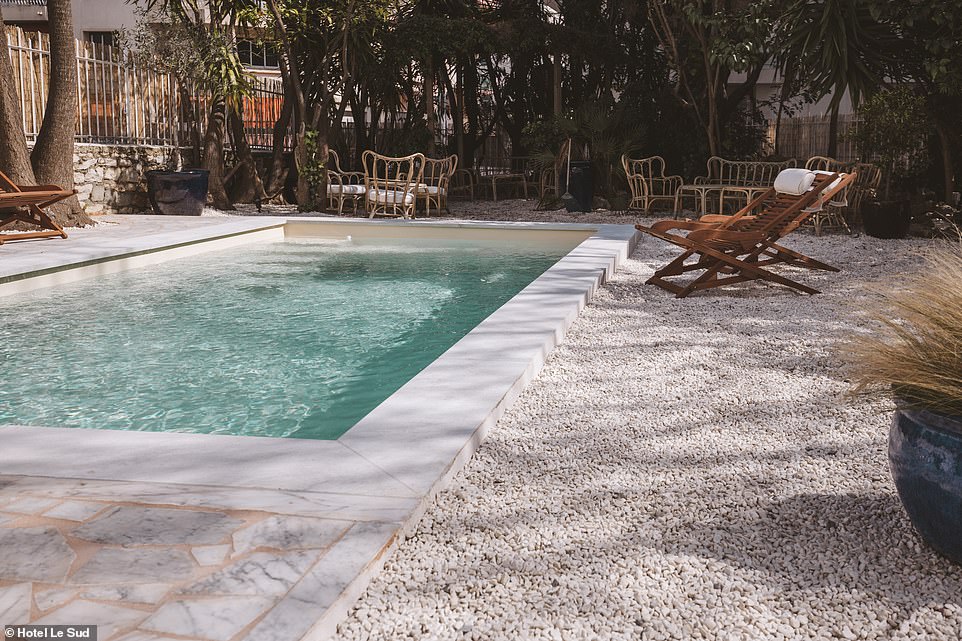 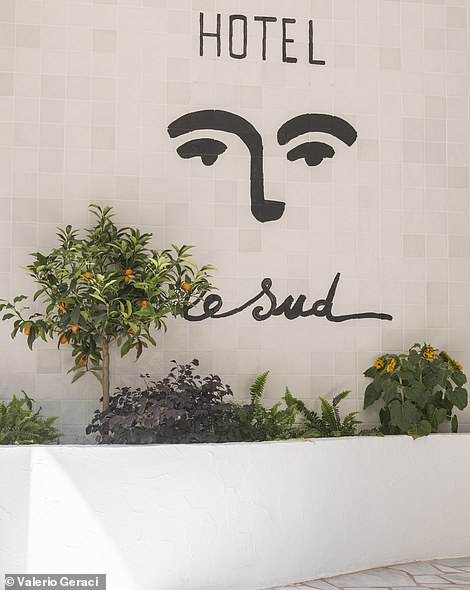 In Antibes, Hotel de la Pinede, built in 1891, is just as venerable as du Cap – Hemingway was a guest here as well.

There are just nine rooms and a small terrace. Although there isn’t a swimming pool, it’s surrounded by restaurants and cafes and the beach is a short walk away. Room-only doubles from £82 per night (hoteldelapinede.fr).

In Juan-les-Pins, the Hotel des Mimosas on Rue Pauline has a distinct sense of style, a fin-de-siecle building in a well-tended palm tree-filled garden.

There’s a swimming pool and blue-and-white striped beach umbrellas for the Instagram crowd. Room-only doubles cost from £92 per night (hotelmimosas.com).

Antibes even has a budget hotel – Hotel Le Sud, which opened in 2020.

Its designer, Stephanie Lizee, has taken inspiration from the artists and early guests at the Cote d’Azur with a light, unfussy decor, filled with ceramics and an easy sense of nostalgia, and with a particularly nice bijou swimming pool. Room-only doubles from £90 per night (hotellesud.com).