French interior minister vows to deport family of Muslim girl, 17, who ‘beat her and shaved her head for dating a Christian’ because ‘they have no reason to be on our soil’

France’s interior minister has vowed to deport the family of a Bosnian Muslim girl who was allegedly beaten and had her head shaved for dating a Christian.

The 17-year-old was left with a broken rib and multiple bruises after the attack in Besançon, 70 miles north of Geneva, on Monday last week.

While investigations are still underway, minister Gerald Darmanin has warned the girl’s father, mother, uncle and aunt will be deported once the case has left court.

‘They will be taken back to the border because they have no reason to be on our soil,’ he tweeted.

Gerald Darmanin, France’s interior minister, has vowed to deport the girl’s relatives because ‘they have no reason to be on our soil’

The case began several months ago when the girl, who came to France from Bosnia and Herzegovina with her family in 2017, began dating the Christian boy in secret.

Fearing reprisals from her family, the girl fled to go and live with the 20-year-old boy on August 13, Le Parisien reports.

Four days later, she agreed to go back to her family home alongside the boy and his parents to try and reconcile.

But, she told police, her family instead attacked her – with her relatives kicking and punching her in the head and body.

The girl claims her father then took a pair of shears and asked her uncle to cut off her long hair.

Her boyfriend ran out of the house and called police, who arrived on the scene a short time later.

The girl’s family are accused of trying to hide her from officers, who eventually found her and arrested the father, uncle, mother and aunt. 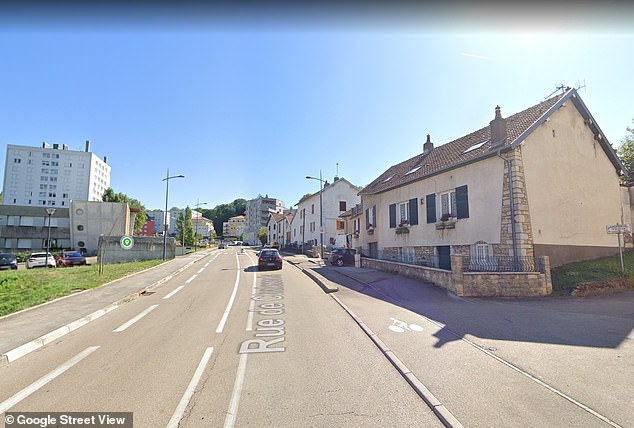 The girl was left with a broken rib, bruising and a shaved head after the attack last week in the city of Besançon (pictured), 70 miles north of Geneva

The four have now been charged with violence against a minor, while the girl has been placed in protective custody.

The case caused outrage on social media, with minister for citizenship Marlène Schiappa saying the family should be ‘shamed’.

Mr Darmanin described the attack as ‘barbarism’ and vowed ‘the most severe sanctions’ – before saying the family would be deported.

Tensions remain high between Bosnian Muslims – also known as Bosniaks – and Christians, 25 years on from the Bosnian War.

The conflict, which took place over three years during the break-up of Yugoslavia, was fought along largely ethnic and religious lines, between Bosniaks, Orthodox Christian Serbs, and Catholic Croats.

In 1995, some 8,000 Bosniaks were killed by Serb forces in the Srebrenica massacre – the worst mass-killing in Europe since the Second World War.

A survey by Pew Research in 2015 found that just 15 per cent of Bosnian Muslims would be comfortable with their son or daughter marrying a Christian.