‘I’m so, so proud of the performance’: Frank Lampard can’t contain his delight after seeing his Chelsea side pick up sixth win on the trot after impressive display at Ajax

Michy Batshuayi scored a late winner to give Chelsea all three points away to Ajax in the Champions League and Frank Lampard could barely contain his joy after the game.

After a rocky start to his managerial tenure at Stamford Bridge his side have found form and Wednesday night’s win against last season’s semi-finalists marked six in a row.

His young side moved level on points with Ajax with the manner of the win pleasing the club legend the most.

He told BT Sport’s Des Kelly after the game: ‘I am so happy! To come here, I knew how tough this game would be, to play and beat them – and deserve to beat them – means you were top all over the pitch. I was so so proud of the performance.’

Christian Pulisic recently went on record as saying that he was frustrated with his lack of game-time since his £58million switch from Dortmund to Chelsea, and he had to make do with a bit part role on Wednesday.

But the American was energetic and silky when he came on and he provided the assist for the winner, earning Lampard’s plaudits.

‘It was getting to the point that the input of the players and Christian in the last two games has brought energy and his performance was outstanding for the 25 minutes he got,’ the coach said. 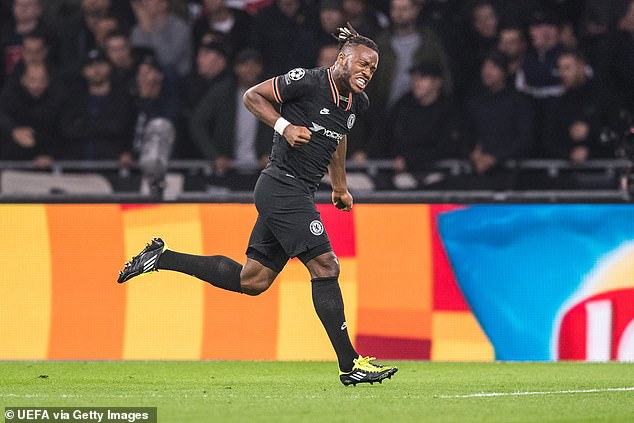 He added on his side’s work-rate: ‘You try to give them information but not overload them, but you have to have detail at this level and I wanted us to be good off the ball. We are working so hard and our end product could have been better tonight.’

As well as singling out Jorginho’s midfield performance, Lampard — although visibly buzzing — refused to be complacent in terms of Chelsea’s form.

‘Yeah it is (the most satisfying win) but we always have to move onto the next one. To win five games on the trot is great but it is dangerous, six games on the spin is even worse, even more dangerous!’

Chelsea face a trip to Burnley in the Premier League on Saturday before welcoming Manchester United to Stamford Bridge for a League Cup tie four days later.