Frat pres. says he was unaware that pledge was in danger

The lawyer for a Penn State fraternity president accused in the death of a pledge after a night of drinking and hazing argued Wednesday that his client was unaware that the student was in danger.

Fina said Young’s entire exposure to Piazza’s drinking lasted only 12 seconds, and there are unanswered questions about how much Piazza drank and how he obtained it. 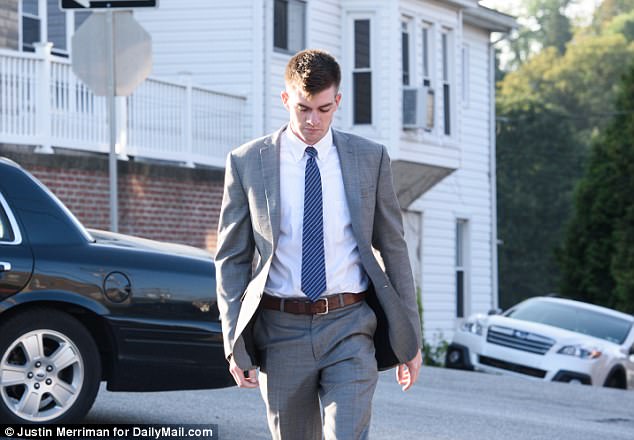 Brendan Young, a member of the Beta Theta Pi fraternity, arrives at the Centre County courthouse

‘We can’t say at what point his tragic injuries were fatal that night,’ Fina argued. ‘And we can’t identify all of the intervening events and the unknowns that contributed or even caused some of Mr. Piazza’s injuries.’

Centre County District Attorney Stacy Parks Miller said Young was ‘in charge of the fraternity’ and sent texts afterward indicating he was responsible.

She said the defendants led Piazza to hazing and excessive speed drinking, aiming to see ‘how drunk they could get him in the shortest period possible.’

That behavior, she argued, meets state standards for criminal liability.

‘They knew that death was a potentially serious consequence,’ Parks Miller said. ‘They proceeded in the face of it anyhow. That is recklessness.’ 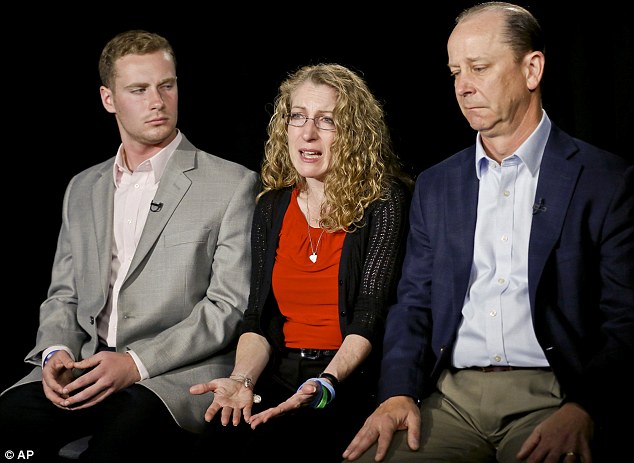 Evelyn Piazza, center, seated with her husband James, right, and son Michael, left, speaks during an interview in New York

Authorities have said Piazza ingested a dangerous amount of alcohol and fell several times during the night of a membership bid acceptance ceremony in February.

Security cameras showed Piazza spent an excruciating night in the fraternity as members made half-hearted and even counterproductive efforts to help him.

Piazza was unconscious by the time he was discovered in the Beta Theta Pi basement the next morning, and he was found to have suffered severe head and abdominal injuries.

Two other defendants have waived their preliminary hearing.