A Royal Navy reservist swindled more than £71,000 from the Navy after he claimed money compensating him for missing out on his income as a solicitor- despite no longer having that job.

Lieutenant Mark Vickers, 55, from London, fraudulently took the money by deceiving superiors and falsifying documents over the period of nearly a year, a court heard.

Portsmouth Crown Court in Hampshire heard Vickers claimed the £71,000 when he was deployed in the Royal Navy Reserve to Bahrain despite being made redundant by his employer after just one month at sea.

Although Vickers, who also plotted to take a further £25,000, admitted two counts of fraud, a Lieutenant Commander told the court the Navy may not discipline him further as it was already short staffed.

Lieutenant Mark Vickers (pictured outside Portsmouth Crown Court), 55, from London, fraudulently took the money by falsifying documents over the period of nearly a year

The Royal Navy pays reservists for their services on deployment, plus additional compensation for missing out on their usual employment.

Following his redundancy, Vickers nevertheless attempted to claim an ’employment bonus’ of £25,000 from the Navy, using forged documents.

An investigation by the Navy uncovered his actions which took place between June 2017 and April 2018.

Prosecuting, Rob Griffiths said: ‘This was an abuse of his position, and there was an element of planning since a letter was produced.

‘It wasn’t a very sophisticated fraud.’

The judge, Recorder Richard Shepherd, told Vickers he had been thinking of sending him straight to prison, saying he had ‘brought shame’ on both himself and the uniform he has worn for 17 years.

But support from the Navy, coupled with mental health complications, made the judge reconsider.

He added that while the Navy reserves the right to discipline him further, it is already short-staffed as it is.

John Townsend, mitigating said: ‘This is a man of good character. 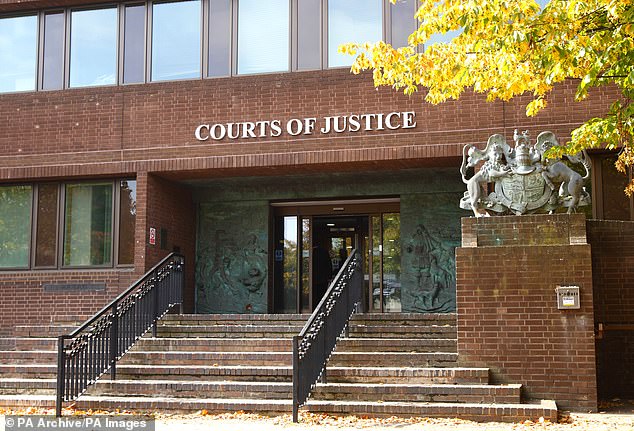 Portsmouth Crown Court in Hampshire heard Vickers claimed the £71,000 when he was deployed in the Royal Navy Reserve to Bahrain

‘He has a distinguished career as a reservist but also as a former solicitor. All of that is obliterated by this conviction.’

Sentencing, judge Shepherd said: ‘Your frauds were committed in various ways, but in essence you lied, cheated and created false documents to cheat the Royal Navy out of money.

‘The navy should have been able to trust you, but you betrayed them.

‘But I absolutely accept your remorse is genuine, and you have been badly affected psychologically.’

Vickers, from London, received a 20-month custodial sentence, suspended for two years. He must also complete 200 hours of unpaid work.

He has already repaid the navy for the money he took, the court heard.

‘By no means is the Navy a perfect organisation but it does employ some extremely good people.

‘However, that doesn’t mean there aren’t occasional apples that are picked that are rotten. That is exactly what this guy was – rotten.’

‘You just wonder how it had gone on for so long, for the best part of a year.’