A mother was conned out of her £161,000 savings by fraudsters posing as bank staff.

Jan Dean was able to send £50,000 with three transactions without NatWest checking whether anything was amiss.

The 62-year-old had rarely made payments of more than £300 in the past.

The criminals also tricked her into moving a £51,000 pension payment into the account they had set up to steal her cash. The medical receptionist lost a further £60,000 from accounts at Halifax. Experts say it is one of the biggest transfer fraud losses they have seen.

The banks found some of the stolen money but, 18 months on, Mrs Dean is still fighting for £91,000 to be refunded. NatWest said they did not have to reimburse her because she explicitly approved the transfers.

A mother was conned out of her £161,000 savings by fraudsters posing as bank staff. Jan Dean (above) was able to send £50,000 with three transactions without NatWest checking whether anything was amiss

Money Mail this week launched a campaign for fairer treatment and compensation for victims of so-called ‘authorised push payment’ fraud.

Figures published this week revealed that around £145million was lost in the first six months of the year.

A code of conduct that spells out what steps banks must take to protect customers from fraud was to be launched by the payments regulator today, but is now not expected until tomorrow.

The rules may include timely warnings – and rapid action – where banks notice suspicious activity on an account. But the watchdog is expected to stop short of making compensation mandatory for all victims.

Mrs Dean has fought to recover her life savings since May last year. She had been looking after her elderly mother who had been taken ill in hospital when she received a text message that appeared to come from NatWest. It claimed there had been suspicious transactions on her account.

When she called the number given in the text message a man called ‘David’ with a Scottish accent answered and said he was from the bank’s fraud department in Edinburgh.

A headline from Tuesday’s Daily Mail. Money Mail this week launched a campaign for fairer treatment and compensation for victims of so-called ‘authorised push payment’ fraud

He told her that criminals were trying to steal money from her account and take out loans in her name. David then said she must act quickly to move her money to ‘safe’ accounts.

When Mrs Dean questioned how she could know he was genuine, David said he would call her back on her mobile and she would see that the number he was dialling from matched the same one on the back of her bank card – which it did. Reassured, she made three payments totalling £50,000.

At no point did the bank call her to challenge the transfers, she said. Mrs Dean was also expecting £51,000 from her pension fund that week.

The crook phoned her the next day and persuaded her to ask her employer to transfer this to the fraudulent account as well.

A day later, David told her to move her money out of her Halifax cash and investment Isas. He told her the bank’s branch staff were under investigation for fraud so she should not let them talk her out of moving the money.

I’d worked 30 years and been careful with money to enjoy a comfortable retirement, just to see it taken away from me.

Mrs Dean went into her local branch in York and transferred £15,000, then phoned to ask for her £45,000 investment Isa to be moved as well.

The married mother of two went on holiday that afternoon believing everything was in hand. But she became suspicious when she returned home a week later and started speaking to friends and family.

She informed NatWest and Halifax, but most of her money was already gone. ‘I was completely numb with shock, speechless,’ she said. ‘It felt like the bottom had dropped out of my life. I was just empty. I’d worked 30 years and been careful with money to enjoy a comfortable retirement, just to see it taken away from me.

‘I’m only speaking out because I don’t want this to happen to anyone else. My husband and family have been so supportive of me. If it hadn’t been for them goodness knows what would have happened to me.’

The banks involved have managed to recover around £70,000 of Mrs Dean’s money after some of the fraudsters’ accounts were frozen. But she is still £91,000 out of pocket.

A Halifax spokeswoman said: ‘We have rigorous security procedures in place to protect our customers and transactions are monitored using industry leading systems.

‘Sadly, it appears Mrs Dean was the victim of social engineering in 2017 and was persuaded by a criminal to provide false information to our staff.

‘She then transferred funds into accounts that were controlled by the fraudsters.

‘While we sympathise with Mrs Dean’s situation, as the payments were made in accordance with her authorised instructions it was not possible to provide a refund.’

Martyn James, of the complaint website Resolver, said: ‘This is one of the biggest fraud losses I’ve heard of. It’s a staggering amount of money to lose and it’s heartbreaking to think how many hours it would have taken to earn that money compared to how long it took for it to be stolen.’

A NatWest spokesman said: ‘We sympathise with Mrs Dean and appreciate this has been a very distressing experience. We have been unable to refund the customer for her loss as she explicitly authorised the payments.

‘The bank provides clear guidance on these scams, including warnings across our channels.’

By REBECCA CAMBER for the Daily Mail 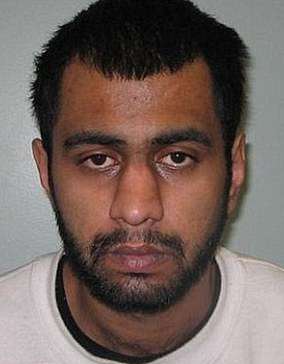 Scotland Yard’s Falcon taskforce caught Britain’s biggest bank transfer fraudster and recovered £47m of his victims’ money. However, months after Feezan Choudhary (above) was jailed, the elite unit was shut down in the face of police cuts

A specialist police team dedicated to fighting fraud and online bank scams has been disbanded.

Scotland Yard’s Falcon taskforce caught Britain’s biggest bank transfer fraudster and recovered £47million of his victims’ money. However, months after Feezan Choudhary was jailed, the elite unit was shut down in the face of police cuts.

Choudhary stole £113million from 750 victims by posing as a member of anti-fraud departments and using data provided by corrupt staff. He was captured following a six-month operation in 2016 by the Falcon team, which stands for Fraud And Linked Crime Online Taskforce.

Yesterday a senior police officer said the decision was a mistake. ‘I believe there are between three and five active gangs currently out there, responsible for the vast majority of this sort of crime,’ he warned.

‘They have quite a lot in common and there are some obvious links between them. On the Choudhary case, we learned a lot about how they operate and how to take them down.

‘It’s tricky and time-consuming, and takes a lot of surveillance, but we felt there was a good chance it could be done again and that the Falcon taskforce were the people to do it.

‘Unfortunately a decision was taken to disband the taskforce. We were told it was due to cuts. Since then, no major bank transfer fraud gang has been prosecuted and the amount of that sort of crime has massively gone up.’

A Metropolitan Police spokesman said: ‘Due to the changing nature of crime, the Met must continually develop and adapt. As such the Falcon taskforce was restructured in 2016 … officers were retained to ensure the continuity and sharing of expertise in this area within the Serious and Organised Crime [unit].’