A number of people are reported to have been injured after a ‘twister’ struck a Picnic in the Park event in Howden.

The ‘freak tornado’ ripped through the Ashes Playing Fields in the Yorkshire town, on Sunday afternoon, sending a huge bouncy castle through the air and into a tree – causing panic.

Residents who attended described how they had ‘never experienced anything like that’ and were ‘stunned’ as they watched on.

Reports suggest two or three people were injured during the freak weather but the extent of the injuries suffered are unclear.

Freak storm causes chaos at event in Howden, Yorkshire. A bouncy castle and larger bouncy slide were sent flying by the strong winds

Children had been seen playing on the bouncy castle at the event, although it is unknown whether any were on it when it lifted from the ground and hit a nearby tree.

Humberside Police were at the event earlier in the day and it is understood that ambulances rushed to the scene moments after the sudden gust.

Reacting to the incident, one person said: ‘My son was about to go on the bouncy castle but I said no cos the rain started. 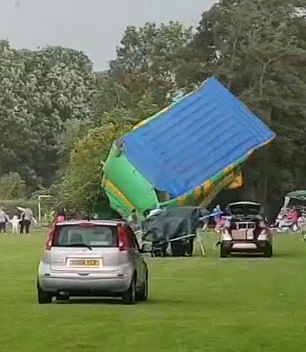 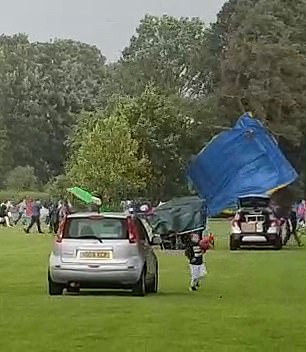 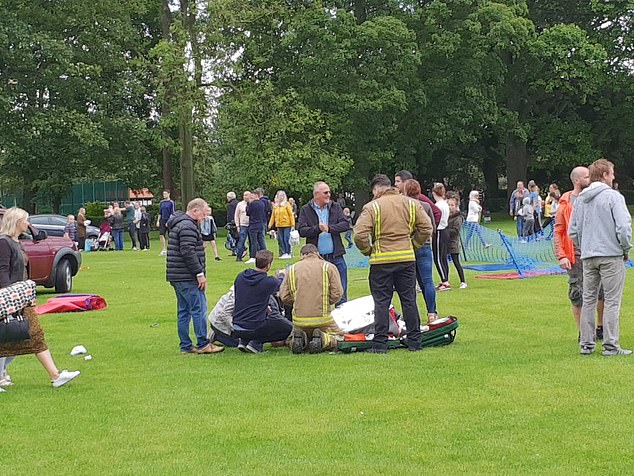 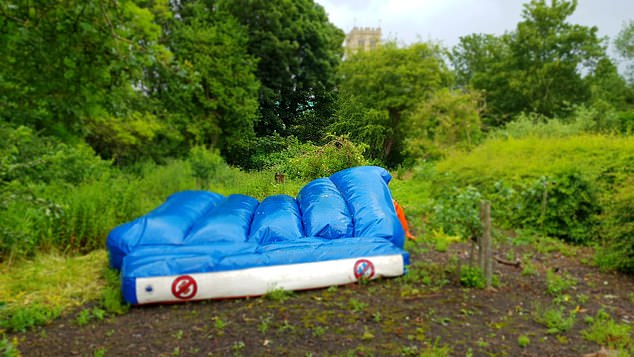 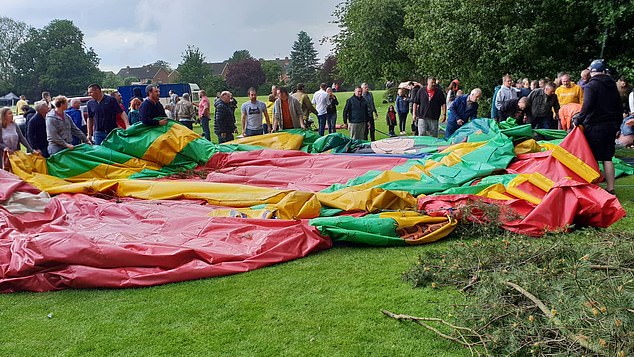 20 seconds later the bouncy castle was thrown into the trees. Feeling a bit stunned but thankful for a split decision to walk away. Hope everyone OK. Pretty scary.’

Meanwhile a second said: ‘Yes there were three people injured after what felt like a tornado ripped through the park. Ambulances on the scene now and thankfully all involved appear to be OK.’

Another person who was at the event said he ‘feared the worst’ and believed two people were injured.

He said: ‘Couldn’t believe it. Feared the worst when we all legged it over. 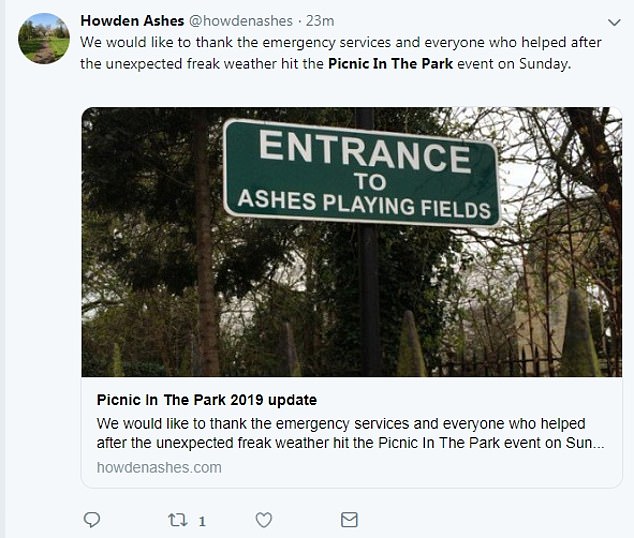 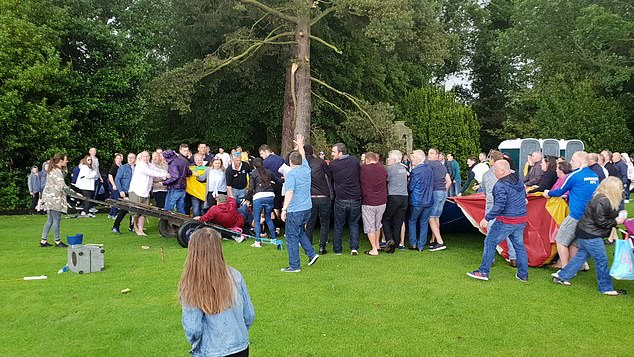 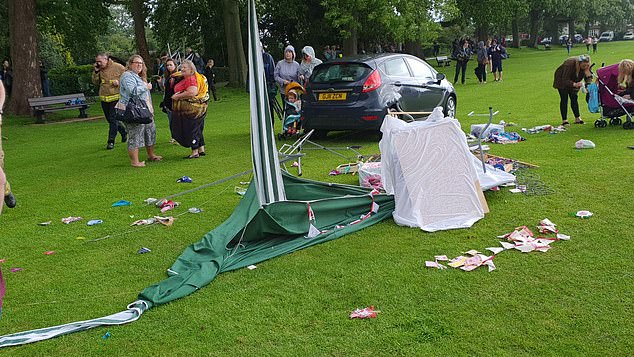 Shows the great community spirit everyone has by rushing over to help. Hope the 2 people injured are ok.’

One witness who was in the park at the time has described the moment the tornado struck. He said: ‘It was just throwing it down. It was like a tropical storm.

‘The winds came from absolutely nowhere.

‘People were running. They didn’t have time to think.

‘The bouncy castle just took off. It just blew up over the trees and rolled in the allotment.’ 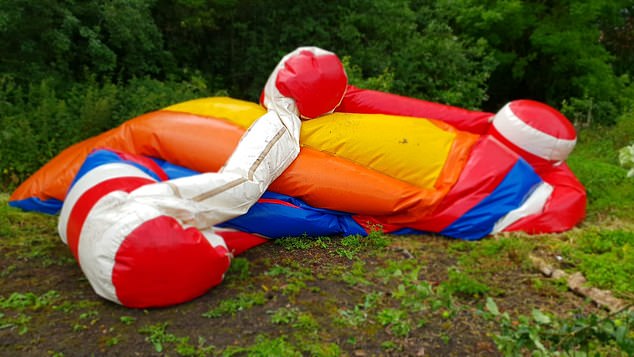 Wind speeds in the Humberside area were only predicted to reach 17mph today – despite the chaotic scenes indicating gusts were far stronger.

Severe weather across the country over the last day has seen almost 600 families in Lincolnshire evacuated from their homes following flooding – after a week of heavy rain caused a nearby river to burst its banks.

Hundreds more homes across the country are still at risk of flooding with 14 environment agency warnings still in place, mostly across the west of England, and 31 flood alerts in Humberside, around Bournemouth and in the area surrounding Greater Manchester.

And the bad weather is set to continue as the Met Office issued thunderstorm warnings for Tuesday and Wednesday, following further showers today. 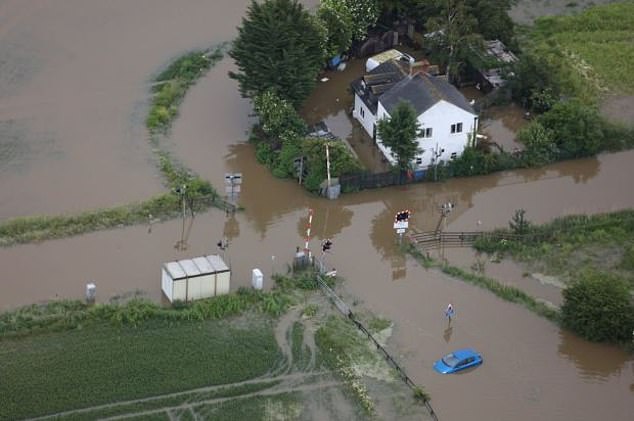 An aerial photo shows flooding in Wainfleet All Saints in Lincolnshire. A house next to a level crossing has been submerged along with the railway line and a blue car. Almost 600 families have now been evacuated from the area 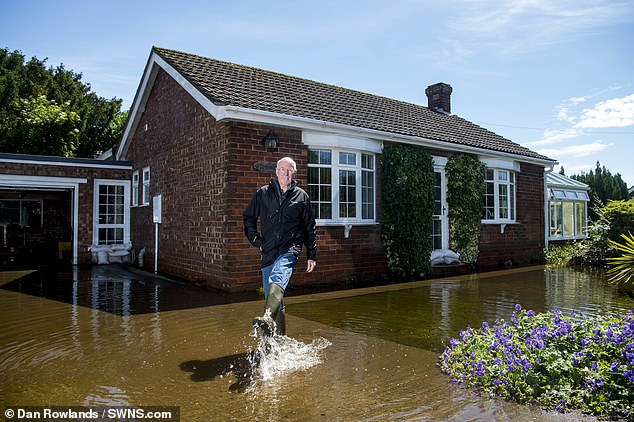 Homeowner John Rowlings splashing along his driveway outside his home on Croft Lane in Wainfleet, Lincolnshire. Earlier this week two months worth of rain deluged the area in two days

Families living in Wainfleet All Saints and nearby Thorpe Culvert were told to leave on Saturday as rain continued to hit the area.

The towns were first flooded on Wednesday, after more than two months’ worth of rain fell in two days.

On Friday three RAF Chinook helicopters had to drop 270 one-tonne sandbags in an attempt to repair the River Steeping’s burst bank, which had led to the flooding. 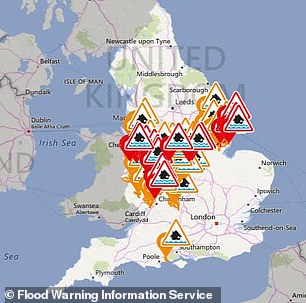 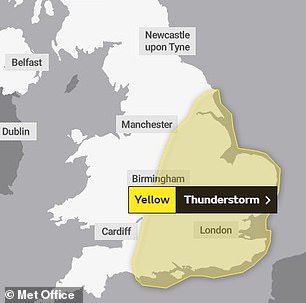 Hundreds of homes remain at risk of flooding across England after 14 flood warnings and 31 flood alerts were issued this morning (left). A yellow level thunderstorm warning is also in place for Tuesday and Wednesday as Britain’s summer looks set to be put on hold until at least Thursday

Last night, the bell to evacuate a further 300 homes was sounded and officers from the Environment Agency and Maritime and Coastguard Agency helped families make their way to higher ground.

Horrifying images from this morning show cars, railway lines and houses sunk several feet in the floodwater that shows no sign of reversing.

And officers are still advising families not to return home as more heavy rain is forecast for the area.