It is not quite a tale of scallop kitchen to soup kitchen, but not far off.

Royal Bank of Scotland’s vast Gogarburn complex outside Edinburgh, widely viewed as a monument to the vanity of former chief executive Fred Goodwin, is now playing host to a food bank.

Shortly after the UK went into the first coronavirus lockdown in March last year, RBS turned its conference centre at Gogarburn into a charity distribution hub supplying food and clothing to people in need in the pandemic.

The food bank is the brainchild of RBS staff member Sheena Hales.

The single mum, 50, was in the autumn awarded a British Empire Medal for her extraordinary service to the community.

It does not deal directly with the needy but has teamed up with charities including Social Bite, which operates a chain of social-enterprise sandwich shops across Edinburgh, Glasgow, and Aberdeen.

Gogarburn, nicknamed ‘Fred’s Folly’, became notorious as a symbol of the excess that led to the lender’s near-ruin during the financial crisis.

Goodwin’s lawyers took exception to an article claiming he had a special scallop kitchen installed close to his office there to serve his favourite lunch.

Subsequently, it was made clear that a wide variety of luxury seafood was in fact prepared in the kitchen.

The Gogarburn complex was officially opened with great fanfare by the Queen in 2005 in a lavish ceremony including an RAF flypast.

In a nod to Goodwin’s friendship with racing driver Jackie Stewart, it also featured a Formula One car zipping through the grounds. 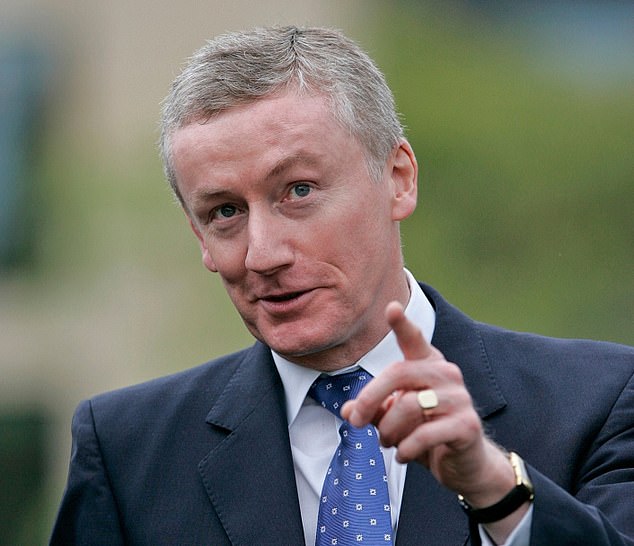 Vanity project: Fred Goodwin was forced to resign as RBS boss in 2008, took a personal interest in the tiniest detail of the £350m Gogarburn complex

The erstwhile boss, who was forced to resign in 2008 and stripped of his knighthood in 2012, took a personal interest in the tiniest detail of the £350million glass and sandstone development.

He even became a devotee of feng shui. But the food bank is likely to exorcise any trace of the ghost of Goodwin.

‘We haven’t always had the best reputation at the bank but I think the fact we were stepping in is being seen in a very positive way,’ says Sheena, who had the idea of using the centre as a food bank as the UK went into the first lockdown.

‘I thought the easy answer was to repurpose our conference centre, get it staffed up and to get some marketing behind it,’ she says. 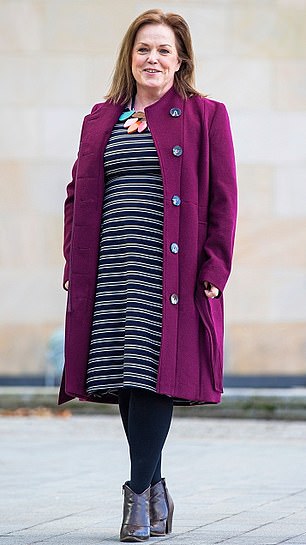 Inspiring: The food bank is the brainchild of RBS staff member Sheena Hales

The enormous campus, which stretches over a 100-acre site, remains the bank’s official headquarters. It can house 6,000 employees, but since lockdown most staff have been working from home.

‘I thought, ‘We are sitting on a massive empty asset that could be useful.’ So I sent an email to our chief administrative officer, Simon McNamara, and I was really shocked within 20 minutes to get an email back to say it had been tabled at an executive meeting,’ says Sheena.

‘Within one hour, I had a call back from the property manager to say we will open the conference centre tomorrow, the marketing team will be in touch and it will be fully staffed. I thought, ‘I’ve gone and done it now, I’ll have to get on with it.’

She adds: ‘I am a single parent and I want to inspire my son. I hope he grows up to realise you need to be able to give when you can and ask for help when you need it. I have needed help at various points in lockdown because it is stressful and lonely at times.’

Crime writer Ian Rankin, who partied at Gogarburn with Goodwin and his acolytes shortly before the near-demise of RBS, described it as ‘almost a city in itself’.

At the time it was built it was the largest planning application in Scotland. In addition to the conference centre, it contains a nursery, health club and a business school.

The bank has been working with the NHS to provide 1,500 free meals each evening to night-shift staff out of kitchens at the site.

Since the project began, it has received large donations that have been passed on to people in need, including 150,000 chocolate items and 80,000 Pot Noodles.

Online retailer Amazon is donating some returned products, including a gift this week of skateboards without wheels. ‘They are perfect for some of our community projects,’ says Sheena.

Customers of the bank have also made generous donations, including a rum distillery that gave hand sanitiser and two farmers who gave 12 pallets of vegetables.

Some restaurants that were forced to close gave their remaining stock from cupboards and freezers, and also cooked meals to give away.

‘There was a lot of sadness in that,’ says Sheena. ‘It was lovely that they were giving food, but that was their livelihood. They were being generous at a time when they were quite scared.’

Sheena is working on a ‘skillbank’, helping charities acquire business acumen that will help them work more effectively.

Parts of the Gogarburn citadel, which was built in woodland on the site of a former psychiatric institution, have already been repurposed.

The opulent executive wing was converted into a hub for small businesses six years ago. This included Goodwin’s penthouse office, known to insiders as the ‘torture chamber’ where he staged his ‘morning beatings’ at 9.30am every day.