A think-tank has said there should be no return to austerity once Chancellor Rishi Sunak’s spending boost to beat coronavirus is over – as a top economist says slashing public expenditure is ‘not a done deal.’

But the group has backed Mr Sunak’s plans for sustained increases to public spending following the pandemic, as reported by The Guardian.

It comes as the Office for Budget Responsibility (OBR) chairman Robert Chote said reported Government debt of more than £300 billion did not necessarily have to mean years of slashing public expenditure.

Mr Chote also said the UK economy should be over ‘the worst of it’ in terms of the economic hit from the lockdown, and is now entering a recovery phase as the public health restrictions are gradually relaxed.

‘The fact that the level of debt goes up on its own doesn’t necessarily mean you have to have the sort of austerity that followed the financial crisis.’

Just days ago the Office for National Statistics released figures showing the UK economy contracted by 2 per cent in the first quarter of 2020.

The first quarter fall was the worst since the end of 2008 at the height of the financial crisis, while the March monthly drop marked a record tumble as it plunged by 5.8 per cent.

Ministers are bracing themselves for the worst as Mr Sunk last week admitted the country is facing a ‘significant recession’. 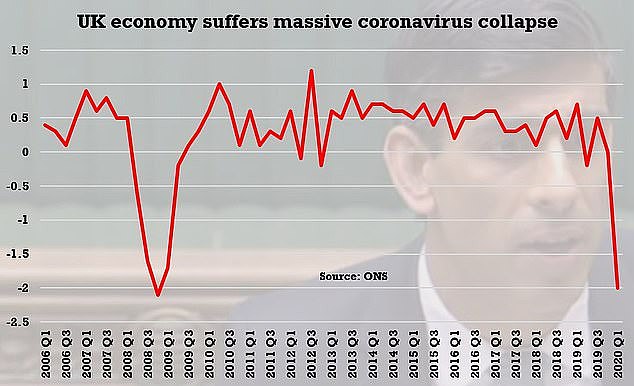 One of the most significant increases in public spending will come from the Chancellor’s much lauded furlough scheme which has paid employers to send 7 million people home.

But it will mean the public spending deficit will rise by more than 15 per cent of GDP, leading to speculation austerity measures could some come in force.

However Boris Johnson has already made clear to Tory backbenchers there is ‘no question’ of a return to previous Chancellor George Osborne’s swinging cuts to public spending, that lasted for ten years.

The Prime Minister was responding to a leaked treasury note reported by The Daily Telegraph, that plans were being put into place to curb public spending.

But in a call to members of the 1922 committee Mr Johnson made clear that there would be no return to austerity, and that planned infrastructure spending would go ahead. 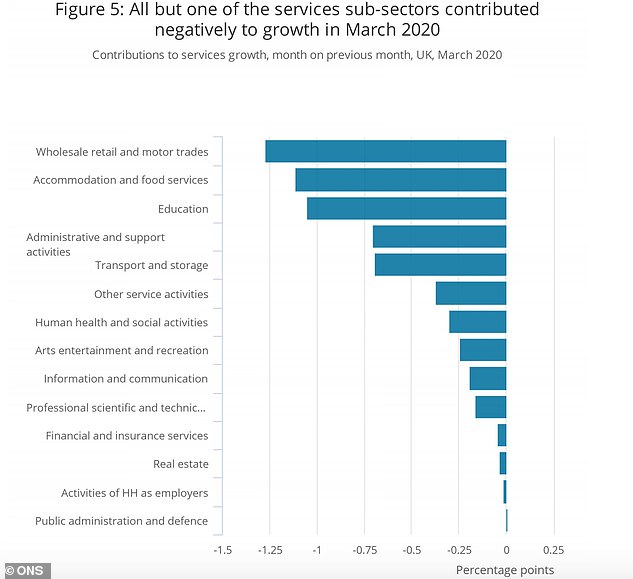 Warwick Lightfoot, chief economist at Policy Exchange, told The Guardian: ‘I don’t think anyone is arguing for a relaunch of austerity. Even an austerity hawk believes it is different this time.

‘The last thing you want to do is amplify the prospects of a full-blown depression.’

Tom Clougherty, head of tax at the Centre for Policy Studies, told the newspaper: ‘I’d usually be wary of big public investment schemes In the current circumstances, though, with borrowing costs very low and little prospect of crowding out private investment, I think the pros outweigh the cons.’