A French policeman has been filmed kicking and stamping on a British man’s head after he allegedly brandished a knife at officers who demanded he wear a mask on a train.

Footage taken by fellow passengers shows the 42-year-old Englishman struggling on the ground while being detained by two officers at the station in Orleans.

The police were called to haul the Briton off the train bound for Toulouse on Tuesday after reports that he was drunk and refusing to wear a mask.

As his colleague handcuffed the Briton, one of the policemen kicked the suspect’s head down onto the train platform prompting a passenger to exclaim, ‘It’s like the United States!’ 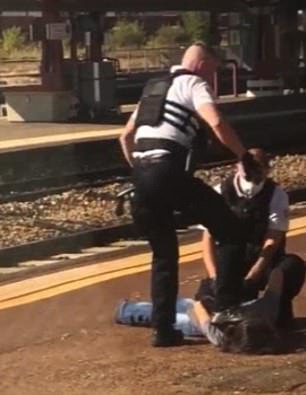 As his colleague handcuffed the Briton, one of the policemen kicked the suspect’s head down onto the train platform prompting a passenger to exclaim, ‘It’s like the United States!’

When the IGPN (the national police force) arrived the officers said that he was abusive and refused to comply so they were forced to drag him off the carriage.

The Englishman then allegedly took out a Swiss army knife and is said to have lunged at the abdomen of one of the officers.

However, several passengers have contradicted the official account and told French media that they believe the police overreacted.

A witness called Pierre said that the Briton had tried to explain that he struggled to breathe with the mask on.

But the officer pointed at his vest and replied, ‘What does that say? This is marked “Police”, not a damned “social worker”, I do not give a damn.’

It’s further alleged by another witness named Clemence that one of the officers yelled: ‘You’re in France here, you’re not in your country.’ 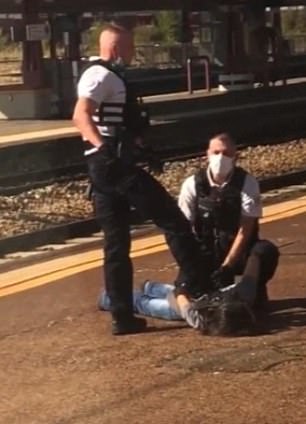 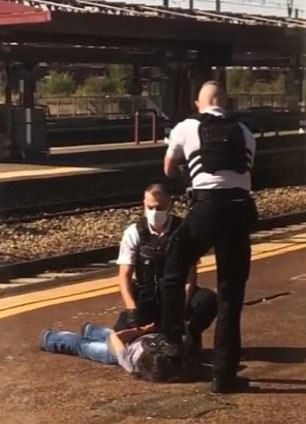 However, the police union has poured scorn on the claims and said that it backs the officers ‘200%’.

Police union Alliance told France 3: ‘They did what was necessary to remove him from the train.’

Referring to the alleged attempt to stab an officer, the union added: ‘We see this as attempted murder.’

The IGPN has opened an investigation into the arrest.

The Briton has since been released from hospital and remains in police custody. 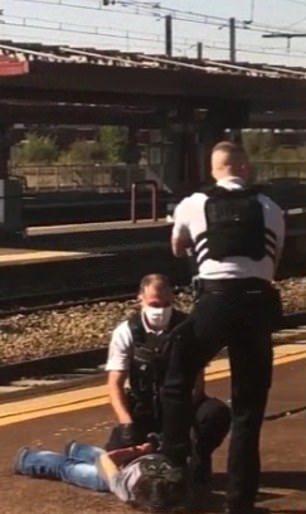 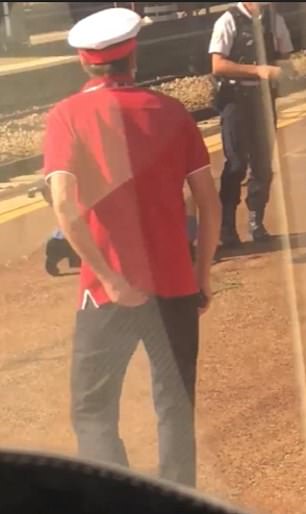 The Briton has since been released from hospital and remains in police custody (pictured: police wait for backup to arrive, left; and a conducted walks past, right)