LVMH has claimed Tiffany & Co’s ‘catastrophic’ performance and ‘dismal’ prospects are to blame for the possible collapse of a £12.6billion takeover.

As the battle between the French luxury powerhouse and US jeweller turned increasingly ugly, LVMH filed a lawsuit in the US to quash the deal, claiming Tiffany is no longer the business it agreed to buy last November.

LVMH, whose brands include Dior, advertised by Charlize Theron, said Tiffany was ‘ill-suited for the challenges ahead – its performance has been catastrophic and its prospects remain dismal’.

LVMH, advertised by Charlize Theron (right), said Tiffany immortalised in The film Breakfast At Tiffany’s starring Audrey Hepburn (left), was ‘ill-suited for the challenges ahead

Tiffany’s ‘performance will continue to be poor’ and their projections are ‘dubious given the ongoing and substantial impact of the pandemic’, LVMH said.

The 97-page filing also claimed Tiffany’s chief executive Alessandro Bogliolo wanted to force the deal through as he will pocket £34million, adding that ‘his golden parachute is equivalent to Tiffany’s losses in the first half of 2020’.

But Tiffany, immortalised in Truman Capote’s novel Breakfast At Tiffany’s which was made into a film starring Audrey Hepburn, hit back.

Chairman Roger Farah said: ‘LVMH’s specious arguments are yet another blatant attempt to evade its contractual obligation to pay the agreed-upon price for Tiffany.’

Tiffany has already filed its own lawsuit against LVMH to push the deal through.

The legal wrangling comes after LVMH, which is valued at £188billion and owned by France’s richest man Bernard Arnault, said this month that the French government had told it to delay the deal to help in the trade war against the US after President Trump threatened to put tariffs on French goods. 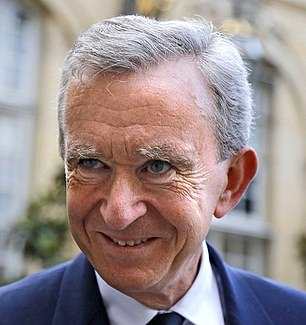 The extraordinary intervention sparked accusations that Arnault solicited government help to get out of the deal, which LVMH denies.

Tiffany responded by suing LVMH. In a lawsuit filed on September 9, it claimed LVMH deliberately stalled winning approval from EU competition authorities and demanded the acquisition go ahead as planned by November 24.

Since the pandemic struck, Arnault, who is known as ‘the wolf in cashmere’ for his tough deal-making, has repeatedly sought ways to get a discount on his $135-per-share offer.

But each time he hit a brick wall, with Tiffany demanding he stick to the terms of the contract. The looming courtroom showdown is a far cry from the praise Arnault showered on Tiffany last year as he said the brand would ‘thrive for centuries to come’.

History suggests LVMH’s core argument, that the pandemic is a ‘Material Adverse Affect’ that nullifies the contract, has only a slim chance of succeeding.

The court in Delaware, where the case is being heard, has only once allowed a firm to escape a merger on these grounds.

It found German medical products group Fresenius could walk away from a $5billion merger with pharma company Akorn after revenues collapsed and a former staffer blew the whistle on regulatory failings.

LVMH has therefore added extra lines of attack arguing Tiffany has been mismanaged during the crisis.

It pointed to decisions to slash marketing and take on extra debt, adding: ‘Tiffany paid the highest possible dividends while the company was burning cash and reporting losses. No other luxury company in the world did so during this crisis.’