French Open reduce number of fans to 5,000 per day as COVID-19 cases continue to rise in Paris

French Open forced to reduce number of fans allowed in by more than half to 5,000 per day as COVID-19 cases continue to rise in Paris

The French Tennis Federation has reduced the number of fans that will be allowed to attend the French Open due to the worsening coronavirus situation in the country.

The FFT announced earlier this month that 11,500 spectators a day would be admitted under strict conditions, but that has now been reduced to 5,000 as cases of Covid-19 continue to rise.

It said in a statement: ‘The evolving hygiene situation in the Paris area has prompted the Paris police department to limit the number of spectators who may enter the 12 hectares Roland Garros site on a daily basis to 5,000 during the tournament.

‘Since the beginning of the health crisis, the French Tennis Federation has worked hand in hand with the state in order to meet the demands of the ongoing sanitary situation.

‘The FFT will therefore assume the responsibility of organising the tournament with a new layout. It is important for the sporting, social and economic life of the country that a major event like Roland Garros can be put on while respecting health imperatives.

‘Such will be the case for the 2020 tournament.

‘The FFT is conscious of how disappointing this news will be for those who will not be able to come to the stadium due to the reduction in capacity. 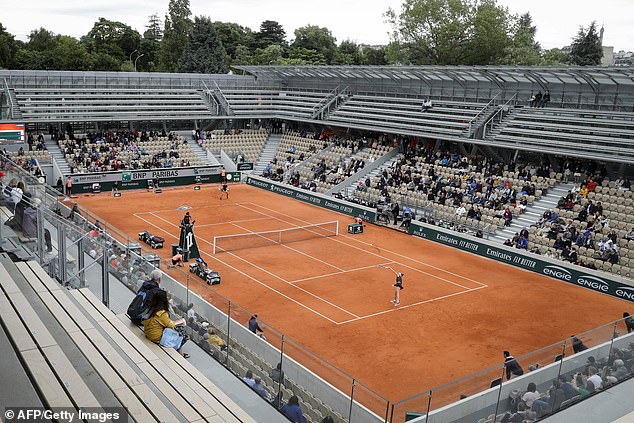 Fans will be allowed in to three zones for the Grand Slam, which starts on September 27

‘Roland Garros 2020 will set an example by endorsing, promoting and defending its cherished sporting values.’

The fans will be allowed in to three restricted zones at Roland Garros with the centre court, Philippe Chatrier, the second court, Suzanne Lenglen, and the third court, Simonne Mathieu, in separate zones. Qualifying will be played behind closed doors.

No movement between the zones will be allowed, while empty seats will be left between household groups and masks must be worn at all times.

Conditions for the players are even more stringent than at the recent US Open, which was played without spectators.

They must stay in one of two tournament hotels – players in New York had the choice of staying in private accommodation – while they will only be allowed on site at Roland Garros on the days when they are playing matches.