Felicien Kabuga, 84, who is accused of equipping extremists in the 100-day Rwandan genocide in 1994, was arrested in Paris today

One of the most wanted fugitives in Rwanada’s 1994 genocide has been arrested outside Paris today.

Felicien Kabuga, 84, who had a £4 million bounty on his head, had been accused of equipping ethnic Hutu extremists in the 100-day genocide that killed more than 800,000 ethnic Tutsis and moderate Hutus.

Kabuga, once one of Rwanda’s richest men, was living under a false identity in a town north of Paris, Asnieres-sur-Seine, the public prosecutor’s office and police said in a joint statement.

The 84-year-old fugitive, who has been wanted by the judicial authorities for 25 years, was found when agents swooped on his house at dawn.

The head of France’s agency for fighting crimes against humanity Eric Emeraux said the chase had been renewed two months ago after new intelligence emerged.

He had been hiding in the suburbs with the complicity of his children and is believed to have previously spent time in Germany, Belgium, the Democratic Republic of Congo, Kenya and Switzerland.

Olivier Olsen, head of the association of homeowners in the building where he lived in France, said Kabuga had lived there for three to four years and described him as ‘someone very discreet who murmured when you said hello.’

In 1997 Kabuga was indicted by the UN’s International Criminal Tribunal for Rwanda on charges related to conspiracy to commit genocide, persecution and extermination. 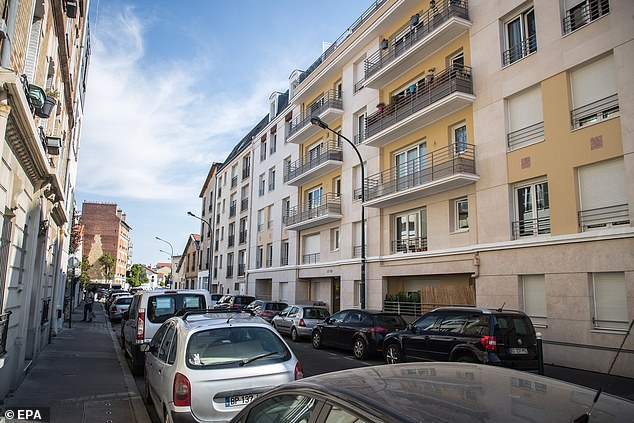 The Rwandan fugitive was arrested at an apartment building in Asnieres sur Seine, near Paris, where he is believed to have been for the last three to four years 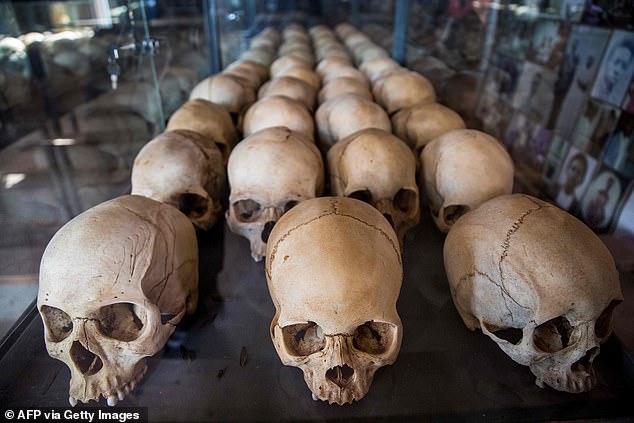 More than 800,000 ethnic Tutsis and moderate Hutus were killed as a result of the killing spree

He was accused of using his wealth and influence during the genocide to funnel money to militia groups as chairman of the Fonds de Defense Nationale fund.

Rwandan prosecutors said financial documents found in the country’s capital, Kigali, after the genocide indicated he had used his companies to import large quantities of machetes which were used to slaughter people.

The wealthy businessman was also accused of establishing the notorious station Radio-Television Libre des Mille Collines, that broadcast vicious propaganda against the ethnic Tutsi and incited people to carry out murder. 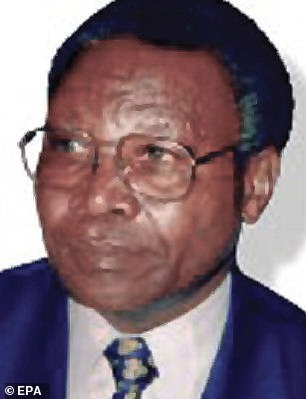 He was also indicted for training and equipping the Interahamwe militia that led to the killing spree.

The Rwanda tribunal formally closed in 2015 and its duties have since been taken over by the Mechanism for International Criminal Tribunals (MICT), which also deals with cases left over from the tribunal for the former Yugoslavia.

Serge Brammertz, chief prosecutor of the MICT in The Hague, Netherlands, said: ‘The arrest of Felicien Kabuga today is a reminder that those responsible for genocide can be brought to account, even 26 years after their crimes.’

The fuguitive will now appear before French prosecutors who should order him to be remanded in custody. Judicial authorities can then rule on sending him to The Hague to face justice.

He is expected to be tried at the MICT’s branch in Arusha in Tanzania but it is likely his transfer to UN custody will take some time because of the coronavirus pandemic.

Mausi Segun, Africa director at Human Rights Watch, said of his arrest was ‘an important step towards justice for hundreds of thousands of genocide victims’.

Officials in Rwanda said the East African nation will continue to collaborate with the UN mechanism to ensure that justice is served. 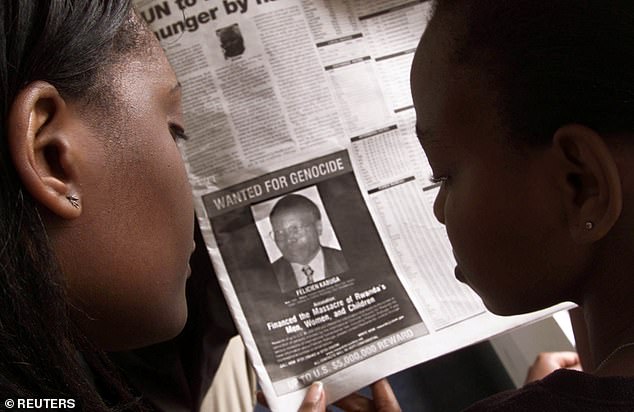 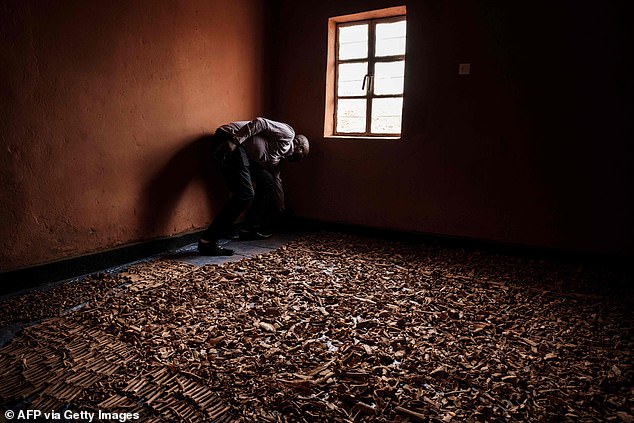 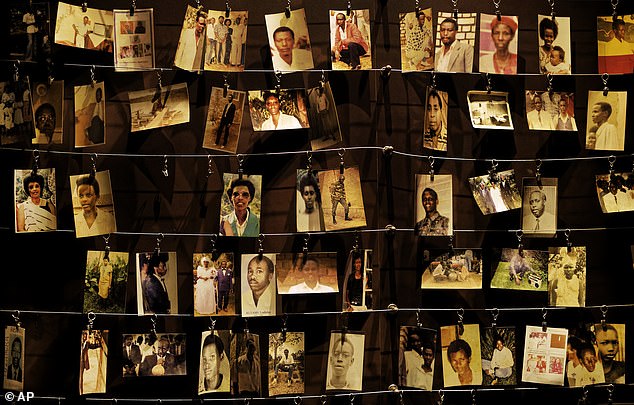 Family photographs of some of those who died hang on display in an exhibition at the Kigali Genocide Memorial centre in the capital Kigali, Rwanda

The son of peasants, Kabuga grew his business from selling cigarettes and second hand clothes at markets in his northern home region of Byumba.

He expanded by opening businesses in the capital Kigali and by 1993 was already part of the inner circle of then Rwandan president Juvenal Habyarimana, with his daughter marrying one of the president’s sons.

It was the assassination of Habyarimana on April 6, 1994 that unleashed the genocide.

Along with former defence minister Augustin Bizimana and top-ranking military figure Protais Mpiranya – both still at large – Kabuga was one of the three most significant suspects still sought over the genocide. 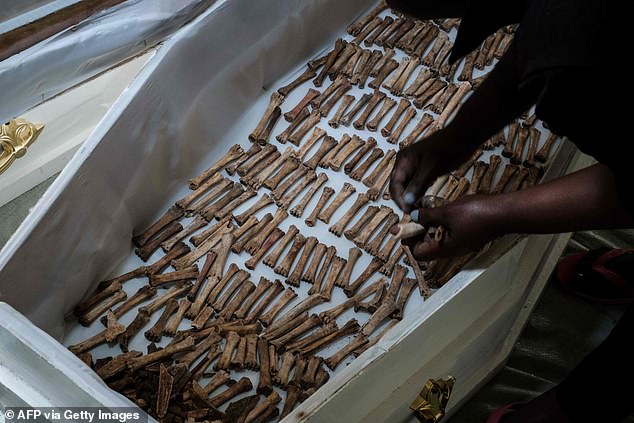 A survivor of Rwanda’s genocide puts remains of victims in a coffin for a mass burial at a local administrator’s office in Gasabo district, a suburb of Kigali 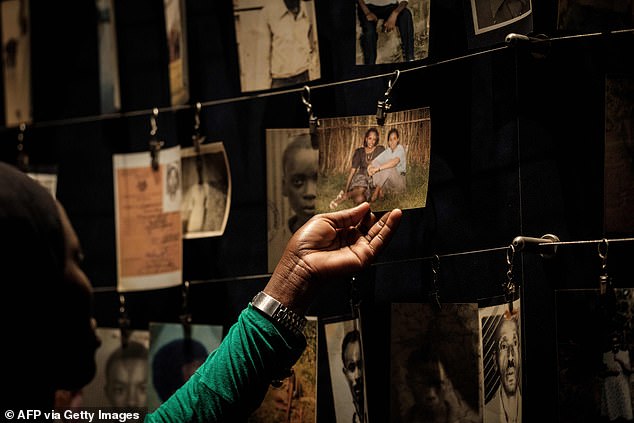 A visitor looking at victims’ portraits at the Kigali Genocide Memorial in Kigali, Rwanda 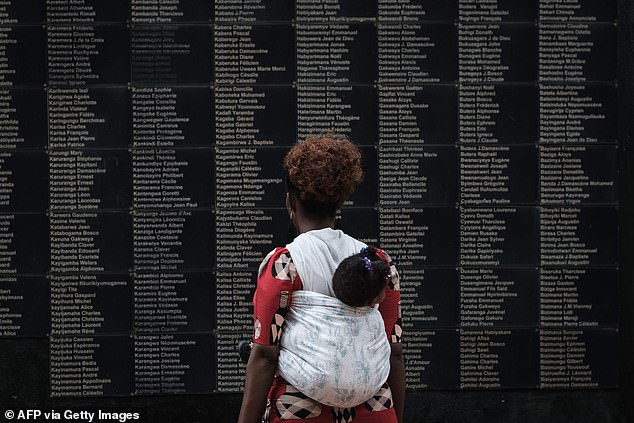 A wall of 800,000 victims’ names can be viewed at the Kigali Genocide Memorial

France has long been known as a hiding place for wanted genocide suspects and French investigators currently have dozens of cases underway.

But so far there have been only three convictions from two trials with another trial – of a French-Rwandan former hotel driver accused of transporting Hutu militiamen – due to begin in September.

The genocide has cast a long shadow over Franco-Rwandan relations.

Rwanda’s President Paul Kagame, a Tutsi, accuses France of having supported the ethnic Hutu forces behind most of the slaughter and of helping some of the perpetrators to escape.

Last year, President Emmanuel Macron announced the creation of a commission of experts that will delve into the French state’s archives in a bid to set the historical record straight.