Demonstrators from the grassroots movement turned out this weekend to resume their stand off with authorities.

But the turnout for round seven of the popular protests that have rocked France appeared low.

Despite it being the seventh weekend of protests, momentum for the movement appears to be waning as only small groups took to the streets in Paris and elsewhere in France.

Several hundred people wearing the symbolic hi-visibility vests had gathered near the offices of France Televisions and the BFM TV channel in the centre of the capital shouting ‘Fake news’ and calling for the resignation of President Emmanuel Macron.

Protesters spilled on to tram lines and lobbed projectiles at police who replied with tear gas grenades and detained several people.

Tear gas was also fired in Nantes, western France, and protests were expected in Lyon, Bordeaux and Toulouse. 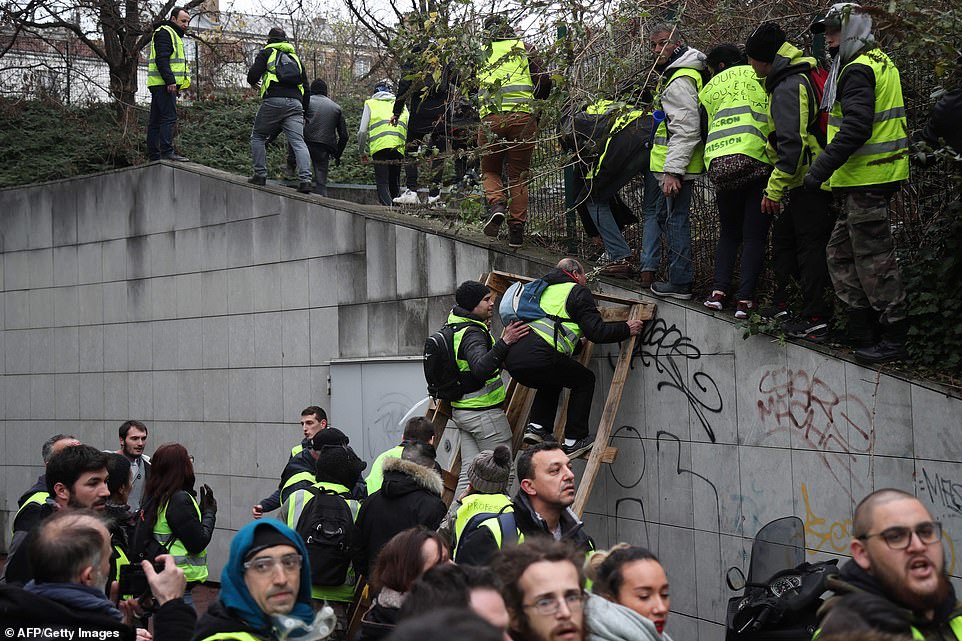 People wearing yellow vests climb a wall as they take part in a demonstration called by the yellow vests movement, to protest against the rising costs of living they blame on high taxes, in Paris today 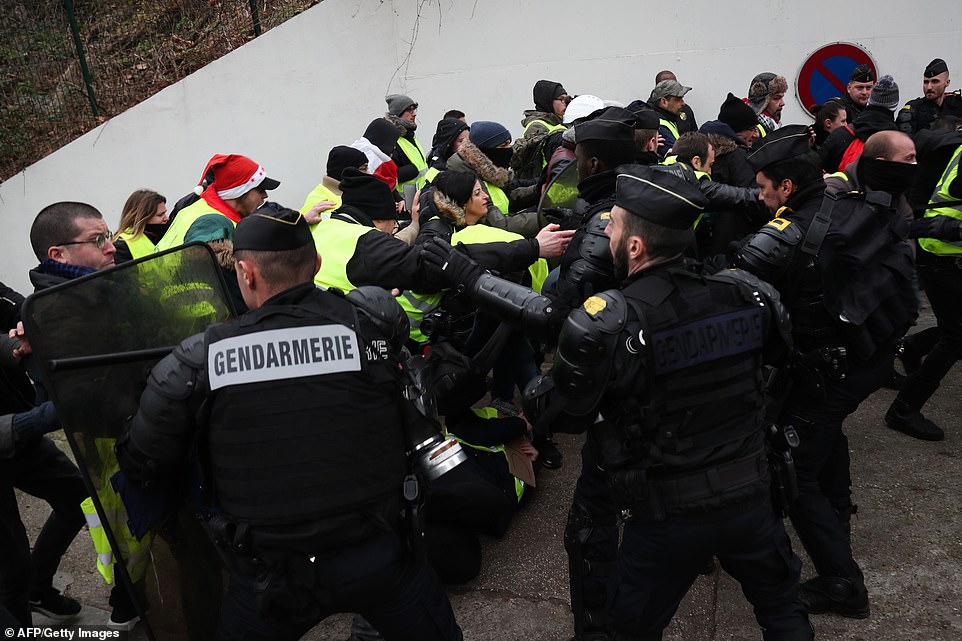 In the southern city of Marseille, police said 900 protesters turned out, amid cries of ‘Macron out’.

The official turnout numbers have plunged with the passing weeks. The government recorded 38,600 demonstrators on December 22 compared to 282,000 for the first major demonstrations on November 17.

But leading figures within the movement that has flourished outside of trade union and political groups, say the low numbers are due to the holiday season and January will bring a resurgence of the street protests.

The focus of the protests has morphed from anger over fuel taxes to a broad rebuke of Macron, accused by critics of neglecting the rising costs of living for many in rural and small-town France.

Priscillia Ludosky, who launched the yellow vest petition against fuel price hikes, said: ‘We want to get our purchasing power back and have a say in the decisions.’ 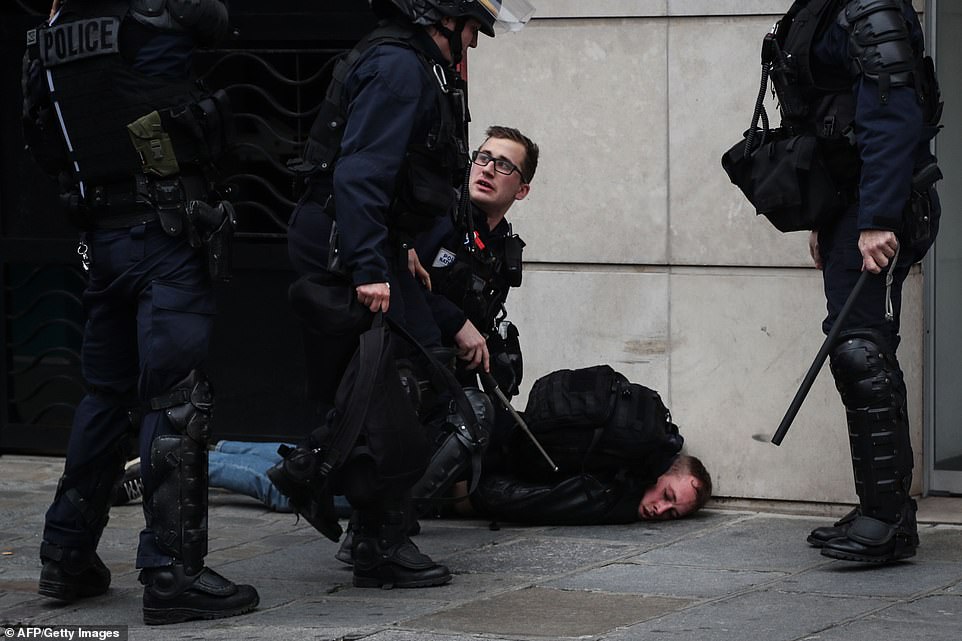 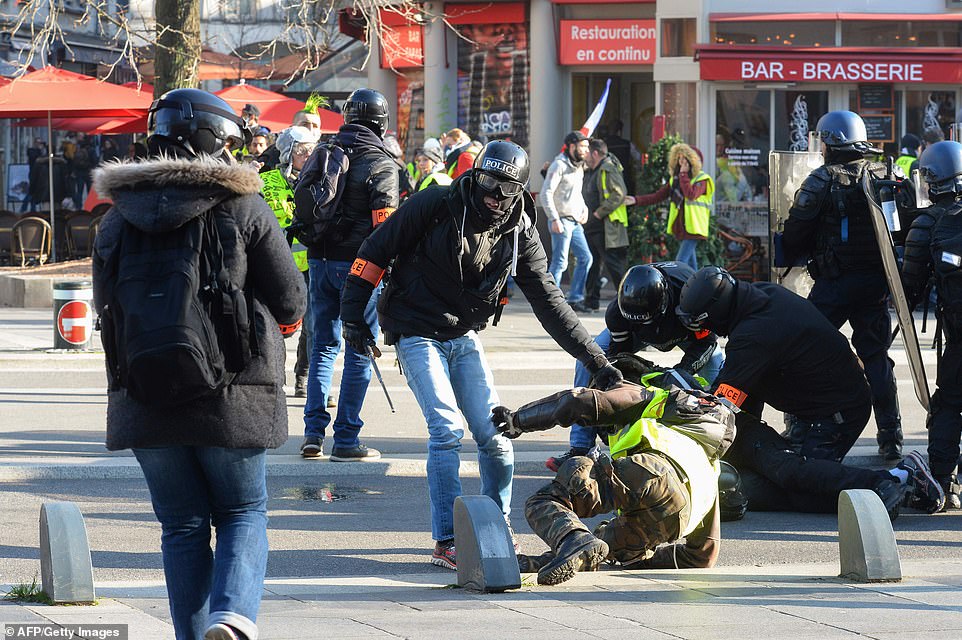 French riot police officers detain protesters and scuffle with them on the ground in downtown Nantes, western France 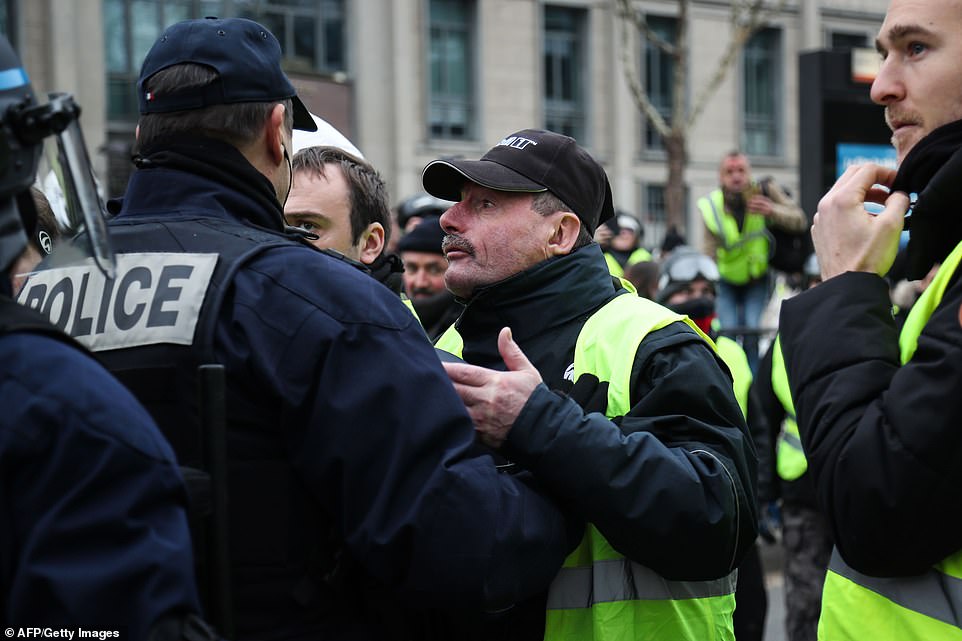 A protester argues with a police officer in Paris today. The movement in France originally started as a protest about planned fuel hikes but has morphed into a mass protest against President Macron’s policies and style of governing

Government tax concessions to boost disposable income among the low paid ‘are not enough’, Ludosky said in Marseille.

The movement has increasingly targeted Macron and 40 ‘yellow vests’ on Thursday tried to storm the medieval fort of Bregancon that serves as his official summer retreat on the Mediterranean before being turned back by police.

Die-hard yellow vest supporters believe the movement will live on in 2019 and plans are underway for New Year’s Eve protests.

Nearly 8,000 people are listed on Facebook as intending to attend, insisting it will be ‘festive and non-violent’.

A few dozen gathered today on the elegant Champs-Elysees, the scene of rioting and violence between demonstrators and riot police earlier this month.

Tear gas, a water cannon and baton charges were used by riot police around the capital during earlier marches.

At its peak at the start of December 89,000 riot police with 750 arrests in one weekend in the capital alone. 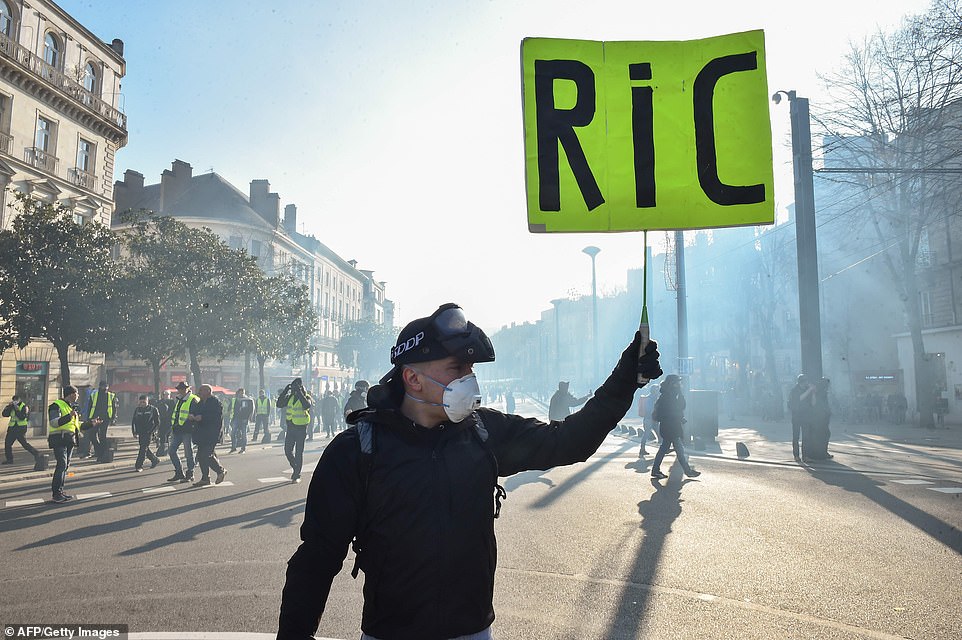 A demonstrator holds a placard reading RIC, the acronym for ‘Citizens initiated Referendum’ during a demonstration in Nantes 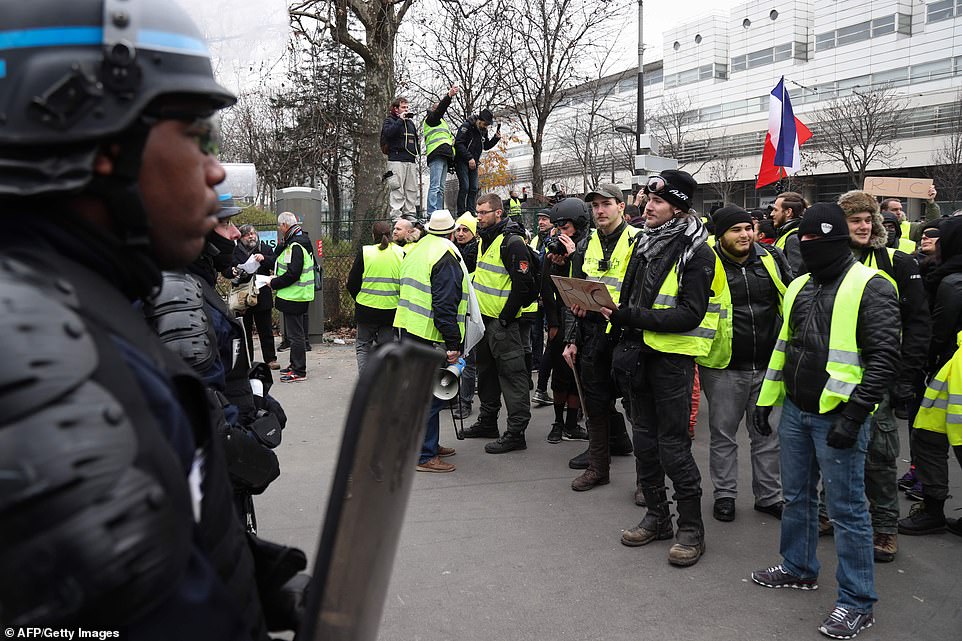 Around 126,000 ‘yellow vests’ – named after the fluorescent jackets they wear – were counted by the Interior Ministry during the biggest demonstrations.

This weekend police have been watching carefully, but both police and protesters appeared to be out in much smaller numbers than previous weekends.

The demonstrations have targeted French President Emmanuel Macron, who ceded to several of their demands for tax relief and other economic help.

However many people remain frustrated with his pro-business leadership and are continuing to stage roadblocks at roundabouts around the country.

The movement began November 17 as a protest over fuel taxes and is named after the fluorescent protective gear French motorists must keep in their cars. 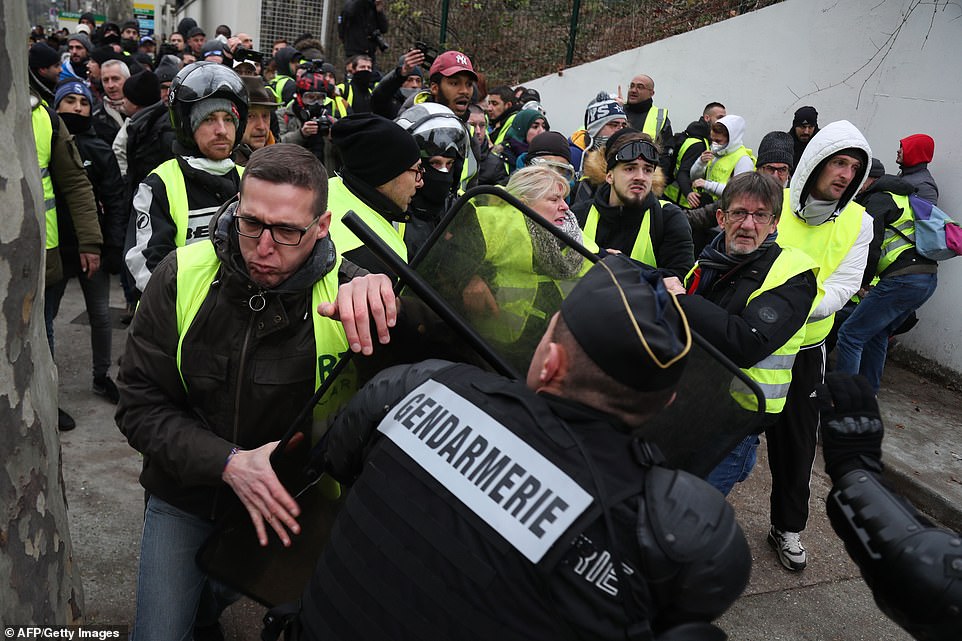 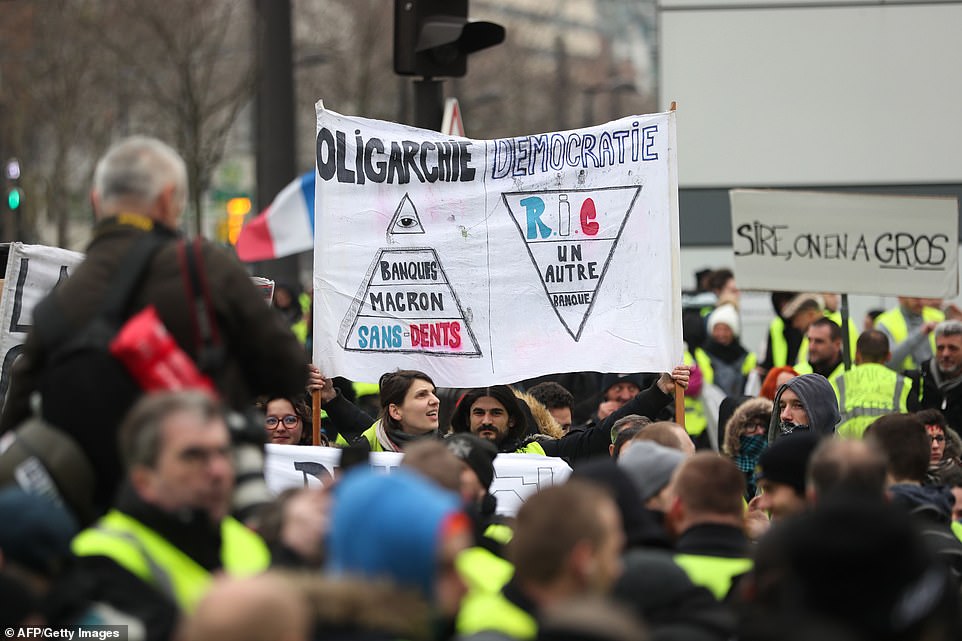 Crowds wearing yellow vests and holding banners, took part in a demonstration against the rising costs of living they blame on high taxes, in Paris today 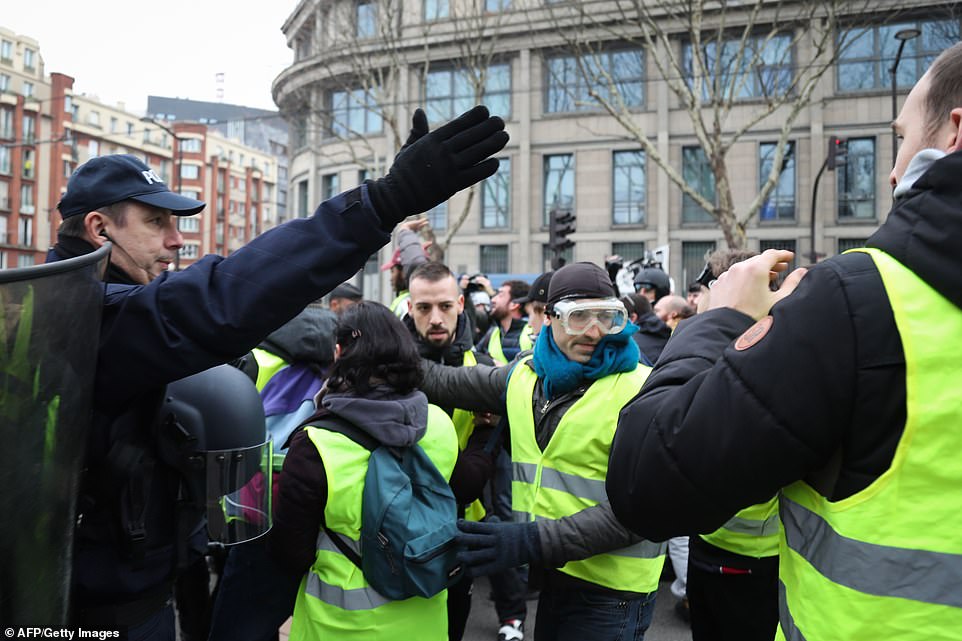 Paris officials said preparations would continue for a fireworks display and sound and light show on the Champs-Elysee, the epicentre of repeated violent action against the government, with the Arc de Triomphe ransacked on December 1.

Tens of thousands of tourists and locals traditionally ring in the new year on the wide shopping boulevard, which rises to the Arc monument.

Around 50 members of the anti-government movement arrived at the medieval fort of Bregancon, on the Riviera coast near Toulon on Thursday, and remained close by on Friday.