Virginia Roberts Giuffre is perhaps the most high-profile of Epstein’s alleged victims.

She claims she is a former sex slave of Epstein and says the millionaire asked her to be a surrogate when she was just 18, around the same time he said she was too old for his sexual perversions.

Her allegations were made public when her since-settled lawsuit against Epstein’s former girlfriend Ghislaine Maxwell was included among the more than 2,000 pages of documents made public by the 2nd U.S. Circuit Court of Appeals.

In a deposition included in the newly released papers, Giuffre said that her father, who worked at Mar-a-Lago as a maintenance manager, got her a job there in summer 2000 as a locker room attendant at the club’s spa when she was 16.

She said she was reading a book on massage therapy one day when she was approached by Maxwell, who noticed the book and told her she knew someone seeking a traveling masseuse. When Giuffre said she had no experience or credentials, she recalled Maxwell said: ‘We can train you. We can get you educated.’

The court records contain graphic allegations against Epstein, portraying him as a sex slave-driver with an insatiable appetite for underage girls.

Giuffre said Maxwell instructed her to take off her clothes and give oral sex to Epstein the first time she met him after bringing her to Epstein’s Florida home near Mar-a-Lago with the expectation she would be trained as a masseuse.

Prosecutors have not accused Maxwell of any wrongdoing. They say they continue to investigate.

In her own deposition, Maxwell called the claims another one of Giuffre’s ‘many fictitious lies and stories to make this a salacious event to get interest and press. It’s absolute rubbish.’

Giuffre managed to escape, after being sent to Thailand for her 19th birthday to take a massage course. She now lives with her husband and children in Australia. 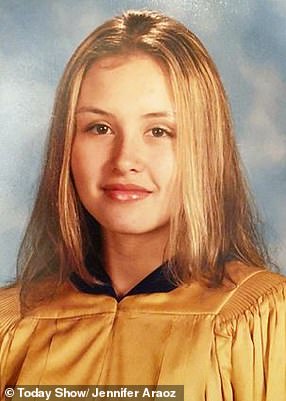 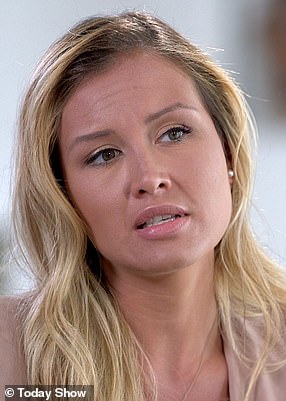 Jennifer Araoz (pictured left as a teenager, and right in 2019)  claims she was a victim of Jeffrey Epstein

Jeffrey Epstein was hit with a lawsuit from Jennifer Araoz on July 23 of this year.

Araoz, now 32, claims she was 15-years-old when she met Epstein after a ‘recruiter’ targeted her outside of her Manhattan high school and lured her to the millionaire’s house, located several blocks away.

The illicit contact ended after Epstein ‘forcibly raped’ her, according to Araoz.

Araoz claims she dropped out of school to avoid Epstein and her life quickly deteriorated. She is seeking damages for her emotional injuries. 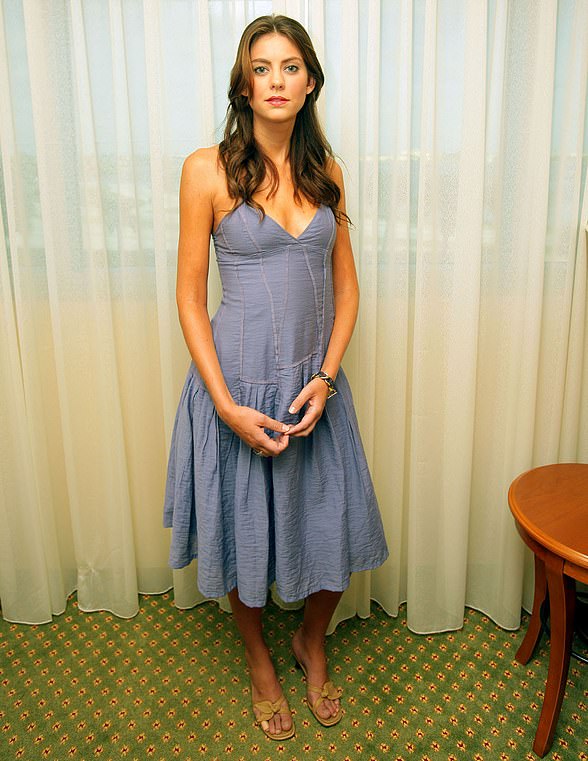 Johanna Sjoberg is pictured in 2007

One of the women who alleges she was ‘lured’ to Jeffrey Epstein’s New York City mansion says the multimillionaire sex offender told her he needed to have ‘three orgasms a day.’

‘It was biological, like eating,’ Epstein is alleged to have told Johanna Sjoberg.

Sjoberg’s testimony was revealed after a federal appeals court on Friday unsealed about 2,000 pages of documents related to Epstein, the financier facing charges of sex trafficking involving dozens of underage girls.

The documents were released by the 2nd U.S. Circuit Court of Appeals in Manhattan, as part of a defamation lawsuit by Virginia Giuffre, one of Epstein’s accusers, against Ghislaine Maxwell, a longtime friend of Epstein.

Sjoberg gave statements in a deposition as part of a lawsuit brought against Maxwell by Virginia Roberts Giuffre.

She said that she was recruited by Maxwell in 2001, when she was a student at Palm Beach Atlantic College.

Sjoberg was under the impression she was being hired as a personal assistant, but she soon realized her job was to provide ‘sexual massages’ to Epstein.

According to The New York Times, Sjoberg was ‘punished’ when Epstein failed to orgasm as a result of one of her massages.

Giuffre alleges that Maxwell recruited her when she was 16 years old to be Epstein’s ‘sex slave.’

The lawsuit was settled in 2017 while the terms were kept confidential. 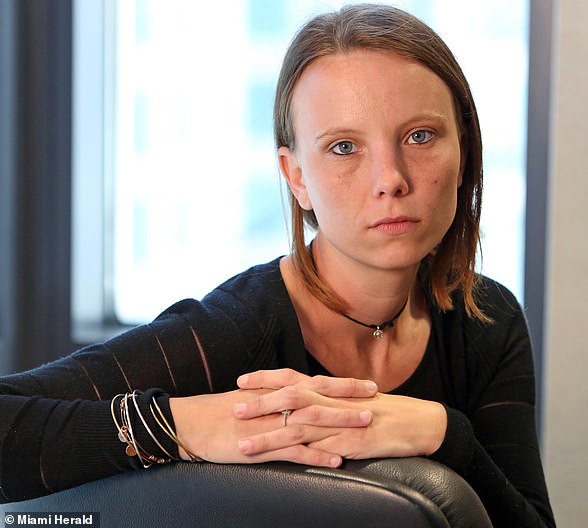 Jena-Lisa Jones (left) stated on Saturday: ‘God will have his judgement now’. Michelle Licata (right) said: ‘I just wanted him to be held accountable for his actions’

Jena-Lisa Jones claims she was just 14 years old when she was allegedly molested by Epstein in Florida.

The purported incident, which occurred in the mid-2000s, left Jones feeling traumatized.

‘You beat yourself up mentally and physically,’ the now-30 year old previously told The Miami-Herald.

Jones has become one of the first women to speak out following news of Epstein’s death.

‘God will have his judgement now,’ she told NBC. 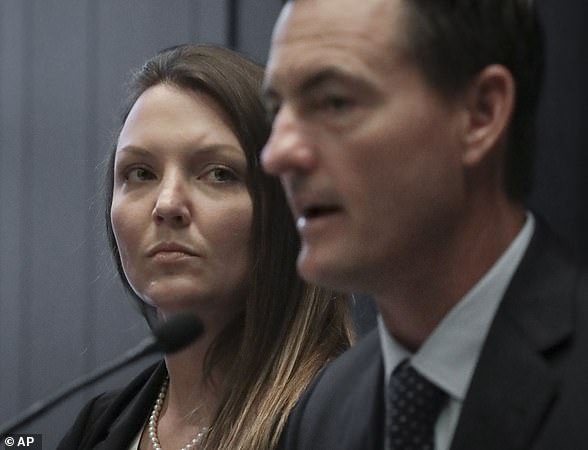 Alleged victim Courtney Wild (left) is pictured with her lawyer. She claims she was just 14 years old when she met Epstein

Last year, Courtney Wild told The Miami Herald that she first met Jeffrey Epstein in 2002, when she 14-years-old and still wearing braces.

She alleges that she helped recruit underage girls for the financier for seven years, alleging that he preferred those who were ‘white and easy to manipulate’.

Wild was wracked with guilt following her association with Epstein and her life fell apart.

She served three years in prison on drugs charges and was only released in November of last year. 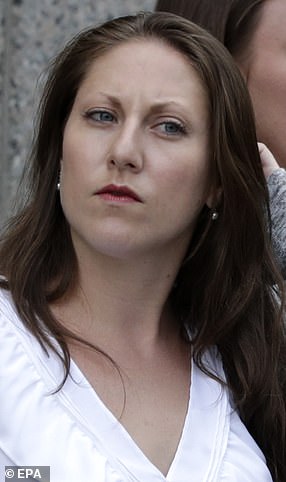 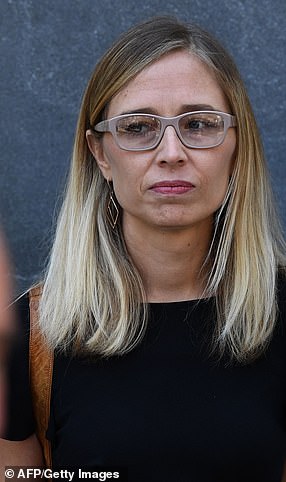 Michelle Licata claims she was a 16-year-old virgin living in Florida when she was recruited by a high-school friend to give ‘massages’ to Epstein.

Soon after arriving at the millionaire’s Florida mansion, she says she felt uncomfortable and he allegedly began calling her ‘beautiful and sexy and gorgeous’.

She described an encounter with Epstein to The Miami Herald in excruciating detail last year.

‘He kept trying to put his fingers inside me and told me to pinch his nipples. He was mostly saying ‘just do that, harder, harder and do this…

‘He ruined my life and a lot of girls’ lives,’ Licata told the paper last year.

Meanwhile, Annie Farmer said she was 16 when she met Epstein in New York.

‘He was inappropriate with me,’ she told reporters earlier this month, although she did not disclose further details.

She was one of Epstein’s alleged victims who appeared in court on July 15 urging a judge to keep the millionaire behind bars, rather than release him on bail. 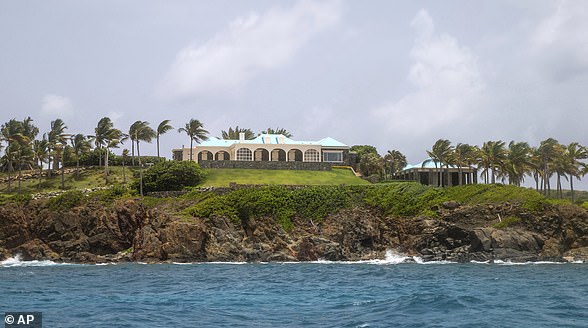 Court documents also revealed that a 15-year-old Swedish girl was allegedly confined to Epstein’s private island and kept there as a sex slave.

The horrific allegations were made by a butler who worked for hedge fund millionaire Glenn Dubin and his wife, Eva Andersson-Dubin.

During a 2016 deposition which was revealed publicly for the first time on Friday, the butler, Rinaldo Rizzo, tearfully described seeing a 15-year-old girl in his boss’s kitchen in 2005.

Rizzo testified in his deposition that the girl was brought to the home by Maxwell and Epstein, who were visiting the Dubins.

The butler said that the girl reminded him of other girls he saw at Epstein’s home.

Rizzo said the girl sat in a stool next to a kitchen counter in the Dubins’ home. She was ‘distraught and shaking…literally quivering’ as she described her treatment at the hands of Epstein’s alleged madam, and her assistant, Sarah Kellen, in the US Virgin Islands.

He claims he told her that they had demanded sex from her and taken away her passport and threatened her when she refused.

Rizzo testified in a deposition which was part of Giuffre’s defamation lawsuit brought against Maxwell.

Giuffre also accused Glenn Dubin of participating in the sex-trafficking ring, according to court documents.

The Dubins have denied these allegations, with a spokesperson for the couple telling DailyMail.com: ‘Glenn and Eva Dubin are outraged by the allegations against them in the unsealed court records and categorically reject them.’