Emily in Paris clichéd? Oui! French public (unlike critics) love the new Netflix series… even if the complained-about stereotypes are true

But it seems the French public are not taking the portrayal of the City of Light quite so seriously and have declared: ‘J’adore!’

Viewers have found it a ‘light-hearted’ antidote to the Covid pandemic – and have admitted that some of the complained-about stereotypes are actually true.

The series, which stars Lily Collins, daughter of pop star Phil, and began its UK run last week, has become the most downloaded show on French Netflix despite the panning by critics.

‘Name a cliché about the French, you’ll find it in Emily In Paris,’ fumed French newspaper 20 Minutes.

And magazine Madmoizelle raged: ‘It reduces the capital’s inhabitants to vile snobs sporting Birkin handbags who light up a cigarette the minute they’re out of the gym.’

In the series, Miss Collins plays Emily, a social-media manager from Chicago who lands a job with a luxury goods marketing agency in Paris.

She speaks no French and wears an ever-changing array of expensive outfits as she discovers a country full of mean-spirited women and sex-obsessed men. 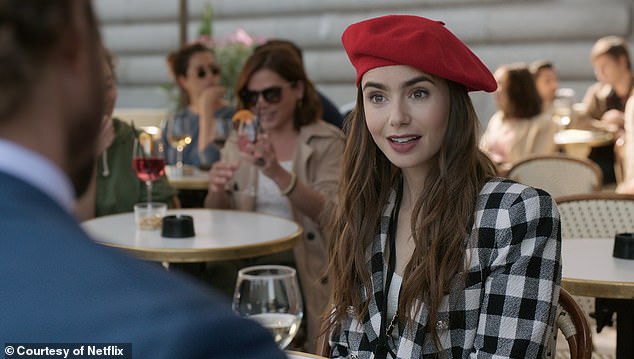 In the series, Miss Collins (pictured) plays Emily, a social-media manager from Chicago who lands a job with a luxury goods marketing agency in Paris

But many viewers have said they recognise many of the well-worn themes about Parisians included in the series, whether the subject is long lunches, arriving late at the office, or the French belief that the Americans ‘live to work’ – while they themselves ‘work to live’.

Elaine Sciolino, 71, tweeted about the series, created by Sex and the City producer Darren Star: ‘Within the clichés were grains of truth.

A few of them.’ She added: ‘The world is dangerous, and Covid is resurging in France. Let’s allow ourselves to enjoy the pleasures of everyday life.’

French fashion writer Marie-Anne Lecoeur said: ‘I am not at all insulted. No harm meant and none taken. This is a light-hearted work of fiction.’

And French translator Moacir Sena wrote: ‘French critics round on Emily In Paris – I still recommend it as a light-hearted take on cultural and linguistic clashes.