A cruise ship docked during strong winds and choppy seas in Norway on January 21.

MS Nordnorge, an expedition ship, was docking at Bodo harbour when it encountered harsh weather conditions.

Footage shows the ship tilting towards the harbour wall as it is pushed along by onshore winds during the attempt to berth.

MS Nordnorge, an expedition ship, was docking at Bodo harbour, Norway, on January 21 when it encountered strong winds and choppy seas during docking 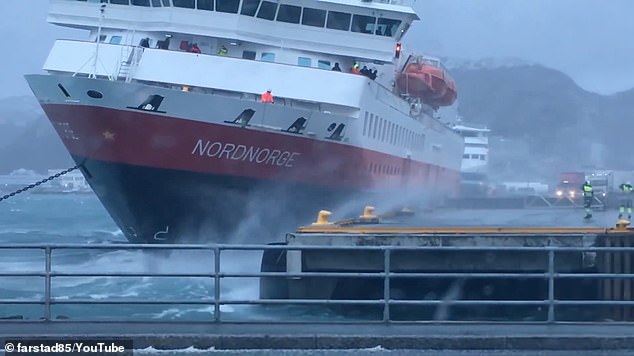 The stern can be seen hitting the pier first before the rest follows, with passengers peering over the side of the ship as it attempts to berth and is pushed along by onshore winds

The stern hits the pier first and the rest of the vessel then follows.

Two people wearing high-vis vests stand back from the harbour wall below before running forwards to fix the rope to the deck fitting.

Other passengers can be seen peering over the side of the ship as it docks.

A similar video was also posted to Facebook, captioned in Norwegian: ‘Skilled fishing boats on board Hurtigruten.’ 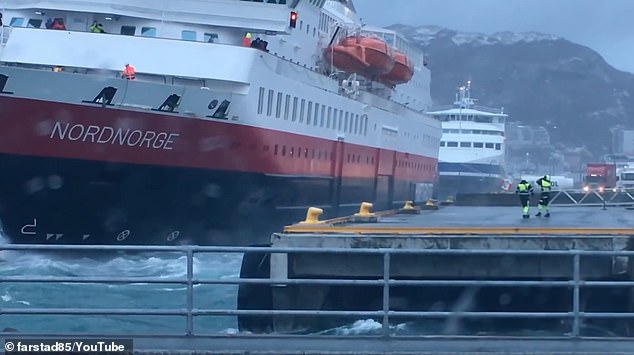 Two people wearing high-vis vests stand back on the pier below before running forwards to fix the rope to the deck fitting, as the ship docks under extreme weather conditions

A third added: ‘Got goosebumps.’

According to the Maritime Bulletin, skipper Tormond Karlsen said in Norwegian: ‘It was quiet when we entered the harbour, but then came the strong gusts of wind from the northwest.

‘We just had to let it stand and use the engines for everything they are worth.’

MS Nordnorge has an on-board expedition team, providing lectures and presentations and activities on the ship.