‘From our family to yours’: Obamas post sun-kissed family Thanksgiving photo

The Obama family is wishing America a Happy Thanksgiving.

Former First Lady Michelle Obama posted a photo on her Twitter account showing her; her husband, former President Barack Obama; and their two daughters, Sasha and Malia, vacationing in what appears to be a tropical setting.

‘From our family to yours, #HappyThanksgiving!’ the caption on the tweet read.

Since the former president left office after eight years in the White House, the Obamas have kept busy in their return to private life.

Although the Obamas made the decision to settle down in Washington, DC, they have largely kept out of politics.

Barack Obama started a foundation based in Chicago aimed at ‘inspiring, empowering, and connecting people to change their world’ by ‘holding leadership training sessions in communities throughout the US’ and ‘bringing local leaders together in countries around the world.’

Michelle Obama has written a bestselling book, Becoming, that has shattered records.

‘From our family to yours, #HappyThanksgiving!’ the caption on the tweet read.

Next month, the former first lady will travel to Vietnam with Jenna Bush Hager, the Today show co-host and daughter of Obama’s predecessor in the White House, George W. Bush.

The trip is part of a joint initiative by Today and the Obama Foundation’s Girls Opportunity Alliance in which the former first lady will meet young girls and share their stories.

Michelle Obama’s husband is due to publish his own memoir, a highly anticipated release, sometime before the 2020 election.

Malia is enrolled at Harvard University, where she is in her junior year.

Sasha, who just graduated from the prestigious Sidwell Friends school in Washington, DC, is in her first year at the University of Michigan in Ann Arbour.

While the Obamas have laid low and kept themselves out of the public eye, the former president continues to take an active role behind the scenes in the Democratic Party’s presidential primary.

Barack Obama has been holding a series of private meetings with Democratic 2020 hopefuls, according to Politico.

The report indicates that Obama is more involved in the primary race than what was thought.

In fact, Obama has privately indicated he doesn’t have faith his former vice president could win the Democratic nomination in 2020.

In a meeting with a Democratic primary candidate, Obama pointed out that during his 2008 campaign, he had an intimate bond with the electorate, especially in Iowa, that he no longer has, according to a Politico Magazine report published Tuesday.

‘And you know who really doesn’t have it?’ he posed to the candidate. ‘Joe Biden.’

He only knows two candidates on a more personal level: Biden and former Massachusetts Governor Deval Patrick, who only entered the race earlier this month.

Polls indicate Obama is the most popular Democrat in American, and his support would mean a ton for any of the 19 candidates still vying for the nomination – but he hasn’t yet endorsed a candidate or gave any indication if and when he will announce that.

In public, Obama has asserted that he won’t intervene in the primary race to help or hurt a candidate unless he feels there was some heinous attack. 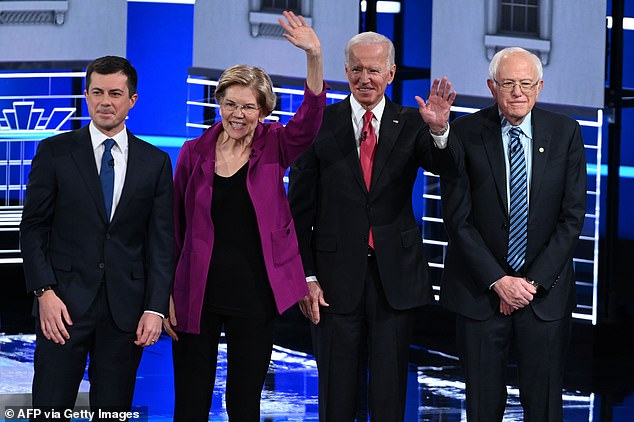 While publicly the former president has largely stayed out of politics, he has privately met with Democratic presidential candidates and offered his candid assessments of their chances. From left: South Bend, Indiana, Mayor Pete Buttigieg; Senator Elizabeth Warren; former Vice President Joe Biden; and Senator Bernie Sanders after the November 20 debate in Atlanta

‘I can’t even imagine with this field how bad it would have to be for him to say something,’ an adviser close to Obama said.

The one exception to potential intervention seems to be with Bernie Sanders – a self described Democratic socialist.

When Sanders appeared to be a bigger threat than he is now – when he and Biden were both earning around 25 per cent support in polls – Obama said in private that he would speak up to prevent Sanders from winning the Democratic nomination.

Despite this, Sanders was one of the candidates who visited Obama for campaign advice.

Obama is also said to have reservations about Elizabeth Warren, the senator from Massachusetts who got under the then-president’s skin with her fiery denunciations of Wall Street and the financial sector during his administration.

Earlier this month, Obama said that the country was ‘less revolutionary than it is interested in improvement’ – a comment seen as a rebuke of Warren.

The senator has proposed a massive overhaul of the health care system as well as massive reforms in the area of taxation and immigration, though there is a fear among centrist and moderate Democrats that Warren is too liberal to defeat Trump if she were to win the nomination.

A spokesperson for Obama said the former Democratic president would support whoever won the primary election.