FTSE 250 soars to record highs: Boost for savers with pensions and ISAs as recovery lifts UK stocks… but blue chips lag behind

Investors have been ploughing money back into British stocks as the optimism around the UK economy mounts.

In a boost for savers with pensions and ISAs, the domestically-focused FTSE 250 soared to a record high as it finally scaled peaks reached before the pandemic struck.

UK recovery: In a boost for savers with pensions and ISAs, the domestically-focused FTSE 250 soared to a record high as it finally scaled peaks reached before the pandemic struck

The previous record close was 22,108 in January last year before it crashed more than 40 per cent as Covid-19 triggered panic on global markets.

A gradual recovery started last March but sentiment has picked up since November when vaccines were shown to work. Investors are now gearing up for life after lockdown with consumer-focused stocks bounding higher.

SSP shares have more than doubled since November on hopes that the reopening of the economy will see customers return to its outlets at train stations and airports.

UK funds have also performed well with investors handing money over to expert managers to take advantage of the upturn.

Among the top performers were the Jupiter UK Mid Cap fund, managed by Richard Watts, up 112 per cent since March last year.

Another stand-out performer has been the Baillie Gifford Smaller Companies fund, which has gained 108 per cent over the same time period. It is managed by Charlie Broughton.

Laith Khalaf, analyst at AJ Bell, said: ‘It is certainly going to be a good year for active mid-cap money managers. The vaccines have turned everything around.’

But while the FTSE 250 goes from strength to strength, its older brother, the FTSE 100, has yet to fully recover from the pandemic.

Unlike the FTSE 250, the FTSE 100 is much more internationally focused, and many of the miners, banks and oilers earn their money overseas, where there is still uncertainty over third waves of the pandemic.

Analysts believe that the FTSE 250 still has further to climb and fresh data showed the UK’s services industry returned to growth in March, with business activity, new orders and employment all rebounding from the previous month.

The IHS Markit purchasing managers’ index for services registered 56.3 in March, with any score above the 50 mark indicating growth. It was the first time the index has posted a score above 50 since October.

There is also evidence recruiters are placing more people in work as businesses start returning to normal because of lockdown measures easing.

US set for ‘goldilocks moment’

The US economy faces a ‘Goldilocks moment’ as it roars back to life following the Covid-19 pandemic, according to one of the world’s most powerful bankers.

JP Morgan chief Jamie Dimon said it was possible the US would see ‘fast and sustained growth, inflation that moves up gently but not too much and interest rates that rise but not too much’. 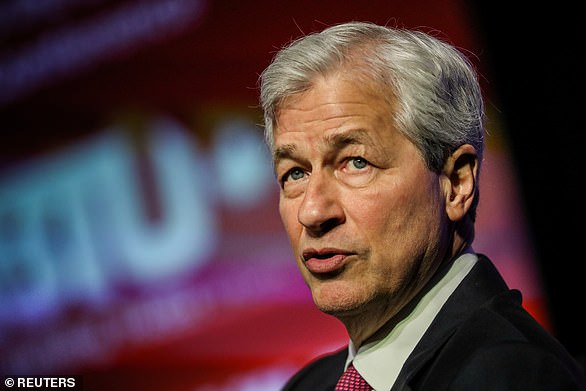 Positive outlook: JP Morgan chief Jamie Dimon (pictured) said it was possible the US would see ‘fast and sustained growth

He said such a ‘Goldilocks’ scenario – so named because the economy is not too hot, not too cold, but just right – would make US debt more manageable and allow the Federal Reserve to begin to raise interest rates and reverse quantitative easing without stopping ‘a roaring economy’.

He added: ‘I have little doubt that with excess savings, new stimulus savings, huge deficit spending, more QE, a new potential infrastructure bill, a successful vaccine and euphoria around the end of the pandemic, the US economy will likely boom. This boom could easily run into 2023.’