Fulham captain and U.S. international Tim Ream praises his team’s aggression against Liverpool after holding the Premier League title chasers to a draw

The first Premier League Saturday of the season got off to a surprising start as Fulham were able to hold off Liverpool and pull out a 2-2 draw at Craven Cottage.

Fulham captain and American defender Tim Ream heaped praise onto his team that struck first and seemed to keep the Reds on their toes all game long.

‘We did exactly what we wanted to do,’ a pleased Ream told the media after the match.

‘We said before the game we want to make it tough on teams coming here, no matter who they are and where they are and the caliber that they have. I think…we did that today.’

When asked if Fulham’s aggression and control of the game surprised Liverpool, Ream replied, ‘Yeah I think so.

‘We knew that if we could be aggressive and take the game to them that they would find it difficult.

‘Whether they were prepared for that or not, that’s on them, but we knew what our game plan was and we did it pretty much perfectly.’

It’s games like these that raise the confidence of a side like Fulham, who won the EFL Championship last season and moved back up into the Premier League.

‘Huge boost, first game back against UCL finalists from last season…it sets the bar of where we have to be at every single match.’ 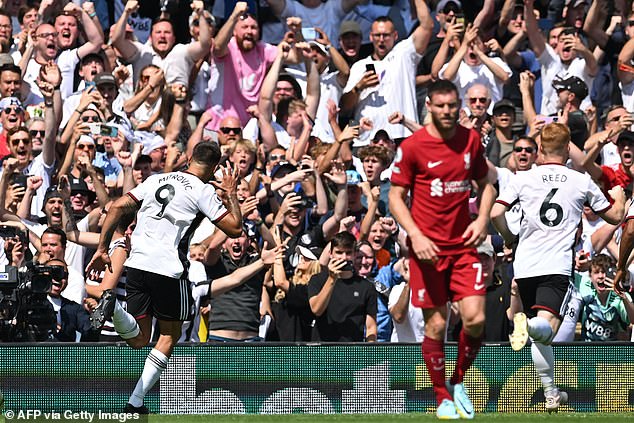 The Cottagers benefitted from two goals from Aleksandar Mitrovic, one from a header above Trent Alexander-Arnold and the other from a penalty given up by Virgil van Dijk.

‘On his day he’s an absolute animal and he showed that again today,’ Ream said of the Serbian striker.

‘As long as he’s banging goals in, we’re gonna be in a good place.’

Whether the momentum is enough for Fulham to stay in the league this year, and to potentially shed their ‘yo-yo club’ moniker, only time will tell.