This is one cat that’s got the cream. For Funky Cat is the name of the eye-catching pure-electric car from new Chinese electric-only brand Ora.

I had people giving thumbs-up signs and stopping me in the street to talk about it.

Priced from £31,995, the four-door, five-seat First Edition launch model is cleverly packaged and well-stocked with lots of standard kit and a simple line-up with minimal options or ‘extras’.

I had great fun driving it through Warwickshire — it was relaxing at pace on motorways and mastering twisty country lanes during a deluge.

The car proved a delight with plenty of power in reserve for swift and effective overtaking.

Riding on 18 in wheels, the electric front-wheel drive car’s 48kWh battery develops 171hp (126kW) allowing it to accelerate from rest to 62mph in 8.3 seconds up to a top speed limited to 99 mph and with a range of 193 miles. The spacious cabin and roomy rear has a premium feel, soft-touch material trim and exposed stitching. The flexible boot is compact but extends with the rear seats down.

It’s a geek’s delight for connected electronic fun with a 10.25 in infotainment screen, keyless entry, wireless charging, voice control commands for setting satnav destinations, seeking the nearest charging station, or setting the interior temperature; and an app with which to control features remotely from your smartphone, such as pre-heating or cooling your car.

But it can also be a bit of a controlling nanny, telling you off if you risk doing wrong or momentarily breaking the rules of the road, or appear to be fatigued or failing to pay attention. Steering could be tighter and satnav graphics can confuse.

It scores a top five-star safety rating and charging times (to 80 per cent) range from five hours 24 minutes on a standard home charger, to three hours 12 minutes on a public charger — and just 42 minutes 30 seconds on a rapid 100kW DC charger.

Despite hailing from China, the front styling resembles a baby Porsche. The interior is friendly and slightly retro – like a 50s American ice-cream parlour – with quilted leatherette seats.

Roughly the size of a VW Golf, it is targeting compact electric rivals such as Volkswagen’s ID.3, the Cupra Born, Hyundai Kona and Renault Megane E-Tech. 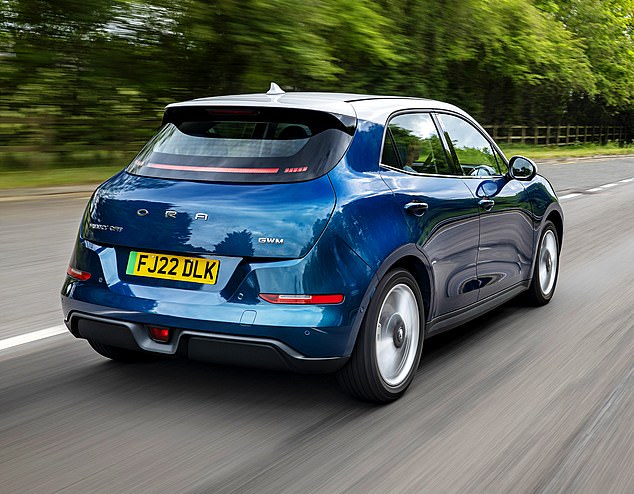 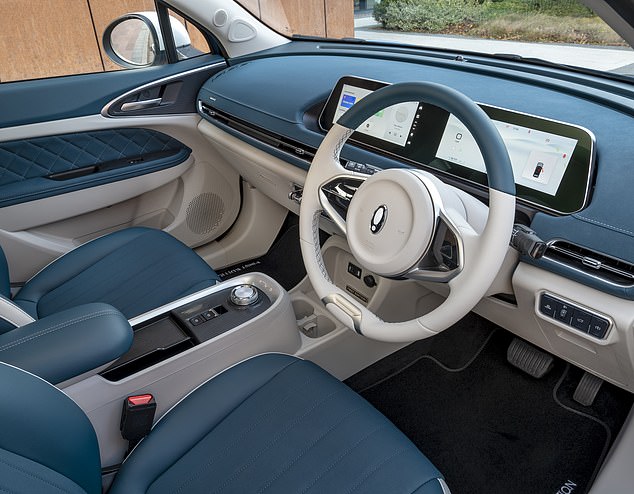 Priced from £31,995, the four-door, five-seat First Edition launch model is cleverly packaged and well-stocked with lots of standard kit 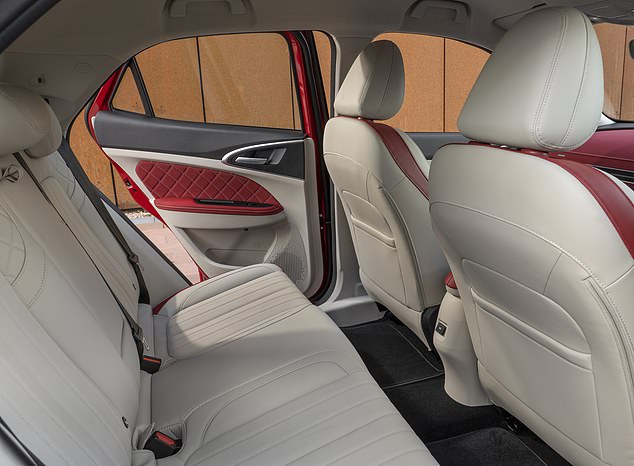 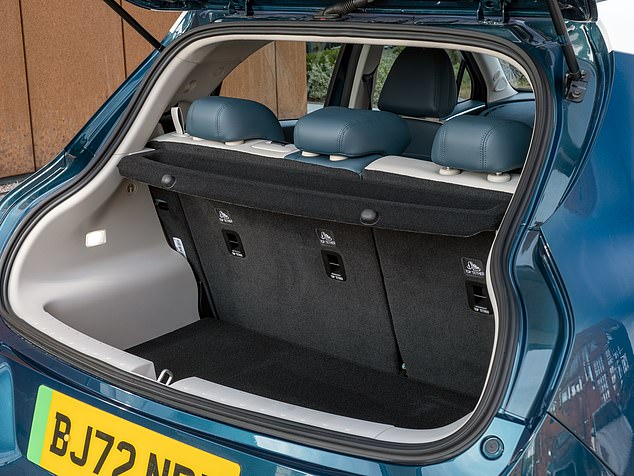 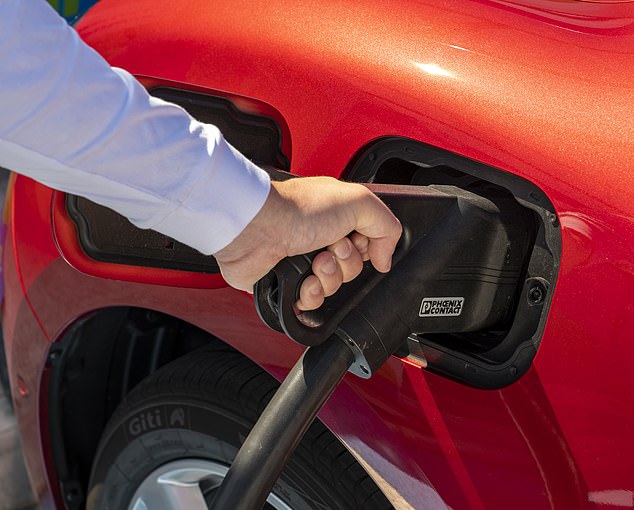 Riding on 18 in wheels, the electric front-wheel drive car’s 48kWh battery develops 171hp (126kW) allowing it to accelerate from rest to 62mph in 8.3 seconds

The maximum five-star EuroNCAP crash test rating – with a high score within that star-rating – was in part down to its extensive Advanced Driver Assistance (ADAS) safety package which includes: auto emergency braking with cyclist detection; junction and lane keep assist and lane centring; traffic sign recognition; and adaptive cruise control. It also has blind-spot detection and 360-degree cameras.

Sensors in the car include facial recognition cameras and software designed to check who is driving and to monitor their habits, which may raise an eye-brow among those who have ‘big-brother’ civil liberties concerns. Ora says the facial recognition system can be used to save a variety of drivers’ preferences and favourite settings, and activate your personal ones the moment you sit in the driver’s seat: ‘The system also works as a fatigue detector ensuring that occupants remain safe when driving long distances, alerting them if they become too distracted or tired.’

Indicator lights are within the main headlights which give a welcoming light display when you unlock the car. The indicator stalk is digital and can be a bit fiddly to switch off until you get the hang of it.

Expect more variants including a cheaper model, a sporty GT, and also a more powerful 61kWh version with a 261 mile range. A larger, longer and sportier fastback model – called Ora Next – is set to follow soon.

Ora comes from China and is the electric-only brand of one of the biggest car firms you’ve never heard of – Great Wall Motors. You will. Last year GWM sold 1.28million cars globally and they’re already in bed with BMW to build the next generation MINIs in China – rather than at the ‘Home of the MINI’ in Oxford. Ora is their electric car brand.

The cars are being imported into the UK by Birmingham-based International Motors which already handles Japan’s Subaru, Isuzu, and after-sales for Mitsubishi. It is setting up a network of established UK dealers to handle Ora sales, though customers can also choose and buy online, and aims to sell 5,000 cars by the end of 2023.

Will it fit in my garage? GWM Ora Funky Cat (First Edition)

Mini lights up for charity

To get you into the festive spirit, an electric Mini has been decorated with Christmas lights — for charity.

This Mini Electric is wrapped in 3,000 smart LED app-controlled twinkly lights, that can generate customised animations, including light patterns, messages and rhythms synced to your favourite song. 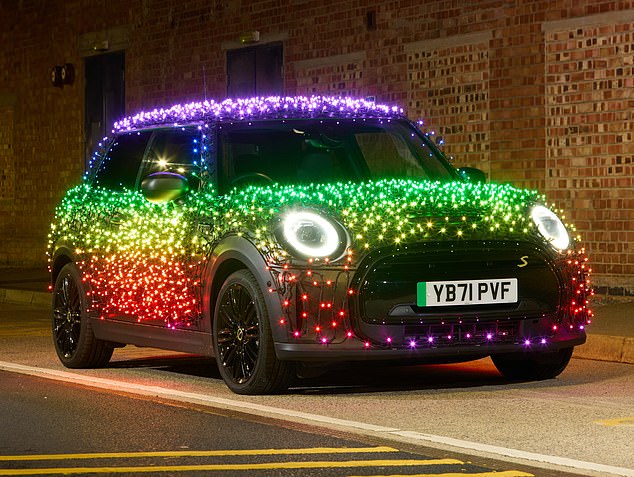 It’s the brainchild of Mini owner Nicholas ‘Nico’ Martin from Berkshire and supported by Mini UK to raise money for those with multiple sclerosis and Duchenne muscular dystrophy — a genetic condition that causes degen­eration of muscles. Each indivi

dual light on the Festive Mini is available to sponsor for £2. The official ‘switch on’ took place yesterday at The Lexicon shopping centre in Bracknell, Berkshire.

Details of the Festive Mini tour at festivemini.com.

No call for winter tyres

Winter tyres, which give extra grip in freezing conditions, are mandatory in many European countries.

But here in the UK there’s no legal requirement — and only around one in five drivers would consider fitting them, according to a new survey by Audi. 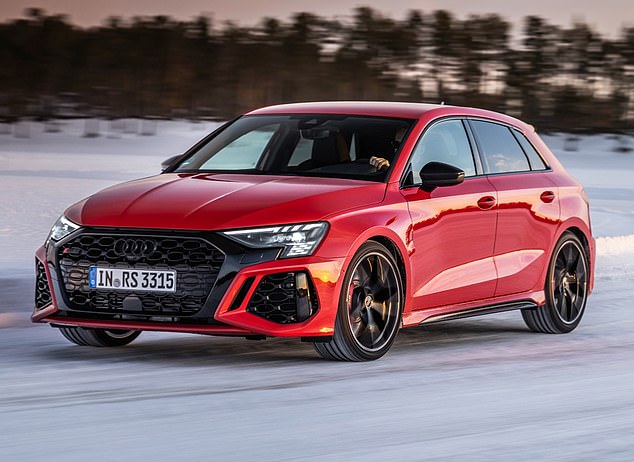 Cold shoulder: In the UK only around one in five drivers would consider fitting winter tyres, according to a new survey by Audi.

More than 60 per cent say they definitely won’t.

Cost, potential inconvenience and lack of legislation were key reasons given.

Audi noted: ‘For 44 per cent of respondents, absence of legal obligation was enough to convince them to pass up the added safety and protection winter tyres offer.’

As Britain’s motorists prepare for the big freeze, I learn that the national winter and severe weather team leader for England’s strategic road network is called Matt Salt, for which news I am indebted to a National Highways press officer called Howard Rhoades.