Players from the Pittsburgh Steelers were among mourners who turned out for the funeral of two disabled brothers who were slaughtered in the synagogue attack on Saturday.

David and Cecil Rosenthal were both killed in the basement kitchen of the Tree of Life synagogue in Squirrel Hill on Saturday by gunman Robert Bowers.

The brothers, aged 54 and 59, lived together in a home nearby and volunteered at the synagogue often. Theirs was among the first funerals to take place on Tuesday, three days after the attack as is customary in Judaism.

Mourners began arriving at the Rodef Shalom Congregation, where their joint funeral was held, two hours before the scheduled noon start.

Among the lines of people who filed into the synagogue were Joey Porter, Maurkice Pouncey, TJ Watt and Ramon Foster, Alejandro Villanueva.

A separate service was held at the JCC for Dr. Jerry Rabinowitz, 66. He was one of the eight people killed in the main sanctuary. Services will be held for the other eight victims throughout the week. 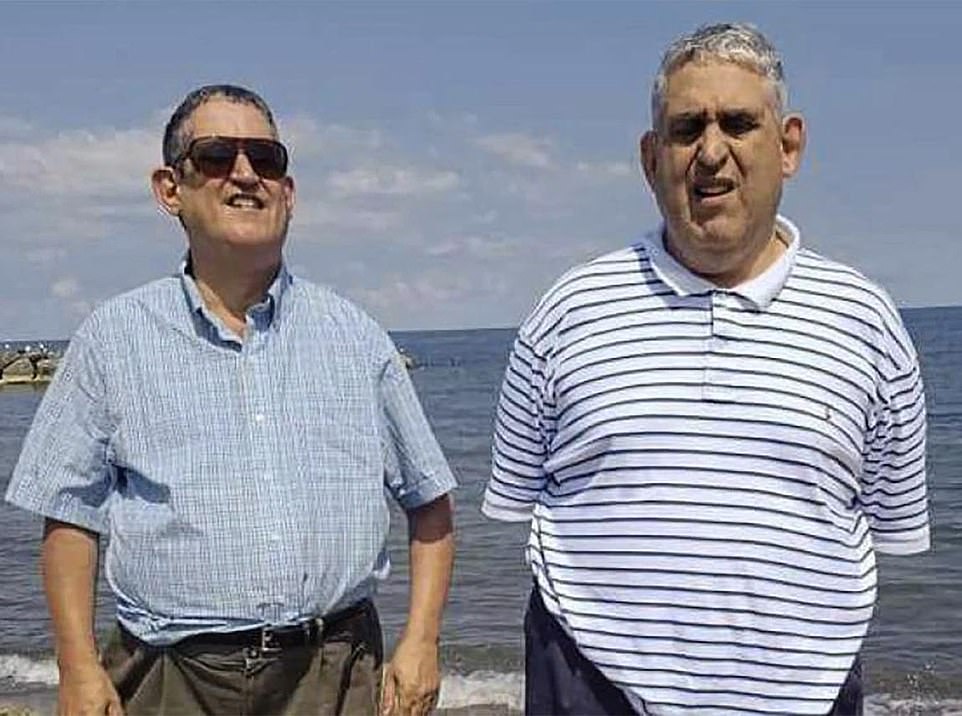 Brothers Cecil, 59, (right) and David (left) Rosenthal 54, were both disabled and volunteered at the synagogue. They were murdered as they prepared food in the kitchen for the New Light congregation. They will be buried together today at noon

Both services will take place on Tuesday hours before President Trump and Melania Trump are due arrive in the city at 4pm. Their visit has divided opinion among survivors of the shooting and residents of Pittsburgh.

Rabbi Jeffrey Myers, who survived the shooting and has been one of the few to say they would welcome Trump, said on Tuesday morning that he had ‘no plans’ to meet with them because his attention would be on Dr. Rabinowitz’s funeral.

‘I have no plans at this time for any involvement. My attention will be the family.

‘I have a funeral and I must tend to their needs, that’s where my attention will be,’ he told CNN.

He also revealed that he has received hate mail for saying that the president was welcome in Pittsburgh.

‘When I first said that the president was welcome… I’ve received a lot of emails, too numerous to count, that are not happy with those words.

‘Those emails also contain hate. It just continues in this vicious cycle. We need to be better than this.

‘We can be better than this,’ he said. 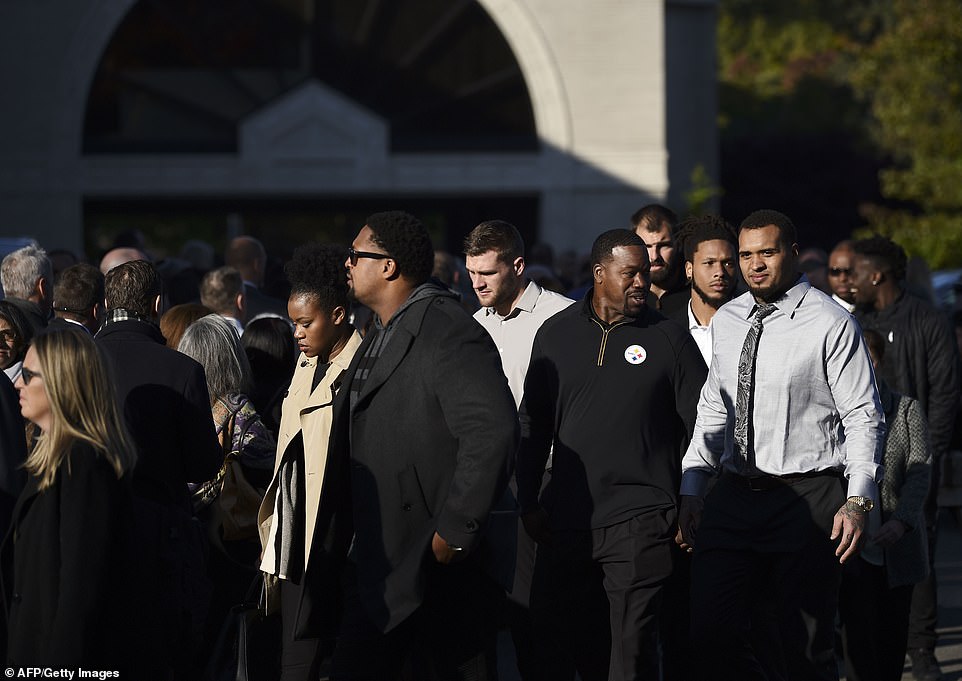 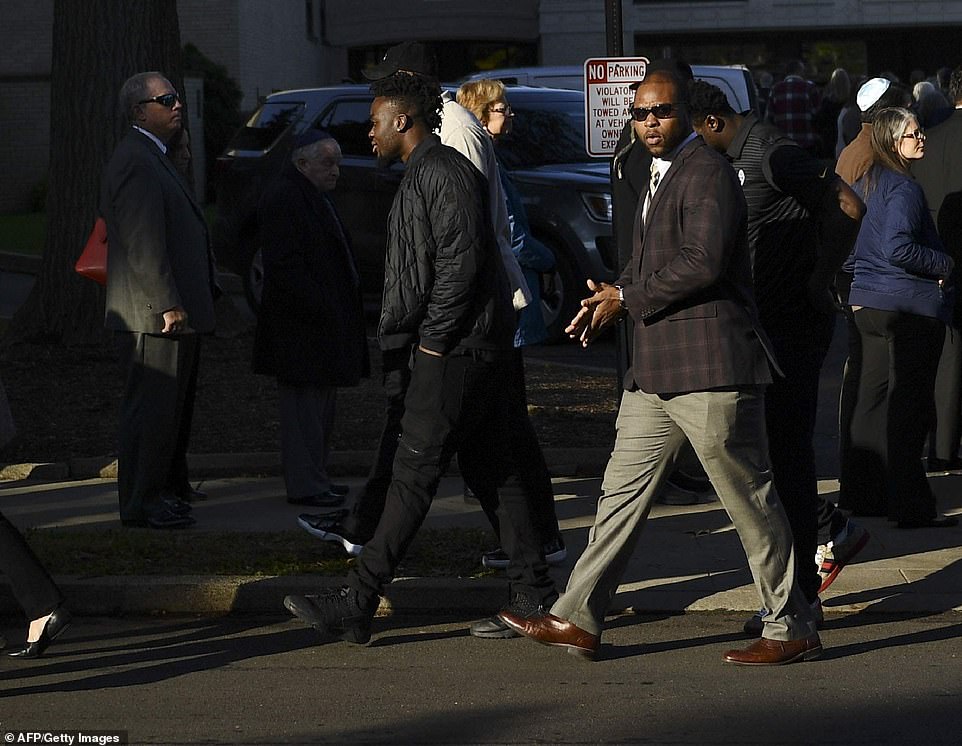 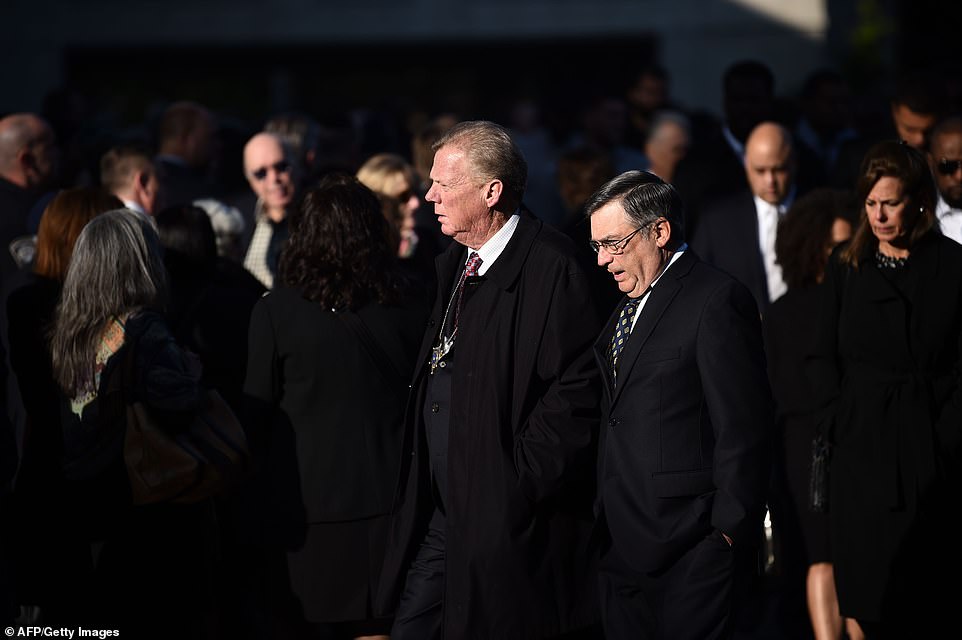 Mourners arrive for the funeral of David and Cecil Rosenthal in Pittsburgh, Pennsylvania, on Tuesday morning 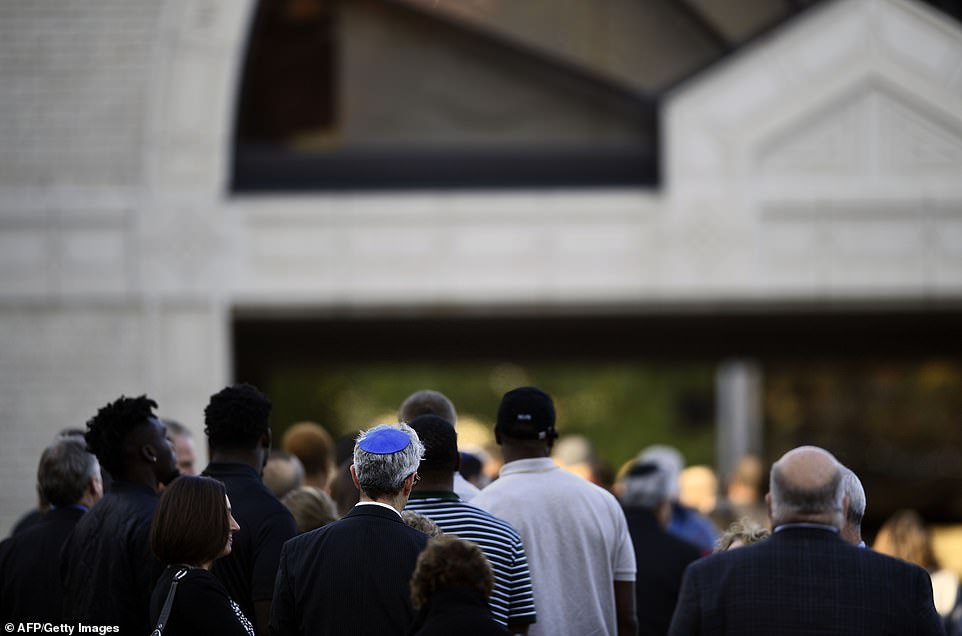 Crowds gathered early at the brother’s funeral, filing into the Rodef Shalom Congregation before 10am despite the service not being scheduled until noon 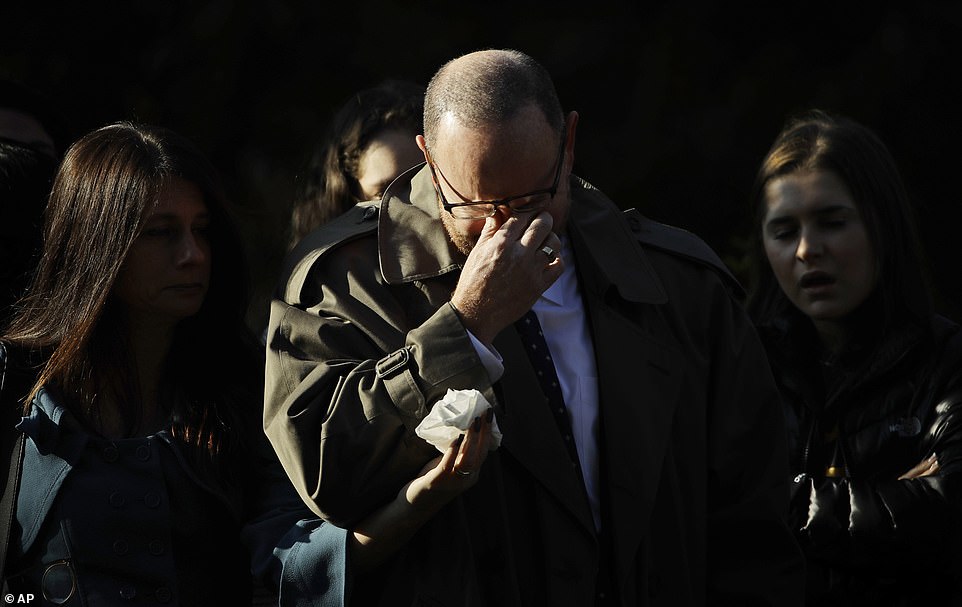 Democratic Mayor Bill Peduto asked the Republican president ahead of the announcement not to come while the first funerals were being held. Some other people, including shooting survivor Barry Werber, weren’t keen on a visit from a president who has embraced the politically fraught term ‘nationalist.’ 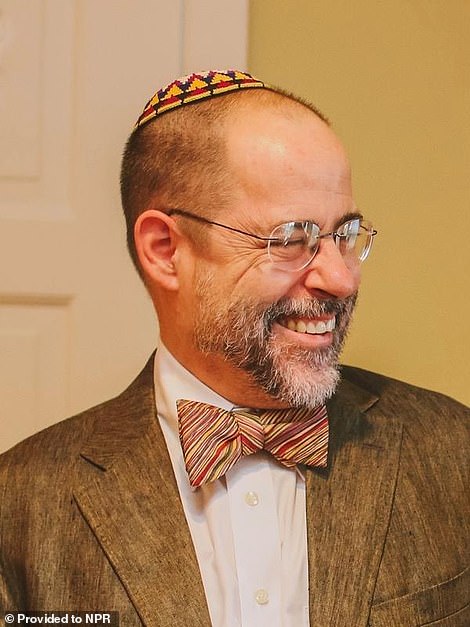 Dr. Jerry Rabinowitz, 66, will be the first to be buried. His relatives say he died trying to treat other congregants’ wounds when the gunfire began

Barry Werber, who was in the Tree of Life synagogue when the gunman opened fire and barely escaped with his life, said he wished the president would not visit.

Bowers appeared briefly before a judge on Monday in a wheelchair and sweatpants.

Authorities say the 46-year-old truck driver, who is facing both state and federal charges, expressed hatred of Jews during and after the rampage.

The fusillade killed people at a synagogue where they were dedicated members. The oldest victim was 97-year-old Rose Mallinger. At 54, David Rosenthal was the youngest victim.

He and Cecil, 59, lived at a building run by Achieva, a disability-services organization that had worked with the brothers for years. David had worked with Achieva’s cleaning service and at Goodwill Industries, and Cecil was hoping to start working soon at a workplace-services company, Achieva spokeswoman Lisa Razza told the Pittsburgh Post-Gazette.

David was quieter than Cecil, who had a sociable personality that earned him a reputation as ‘the honorary mayor of Squirrel Hill,’ a venerable Jewish enclave in Pittsburgh.

‘They were lovely souls, and they lived for the congregation’ at Tree of Life, said Brian Schreiber, a member who’s also president of the Jewish Community Center of Greater Pittsburgh. 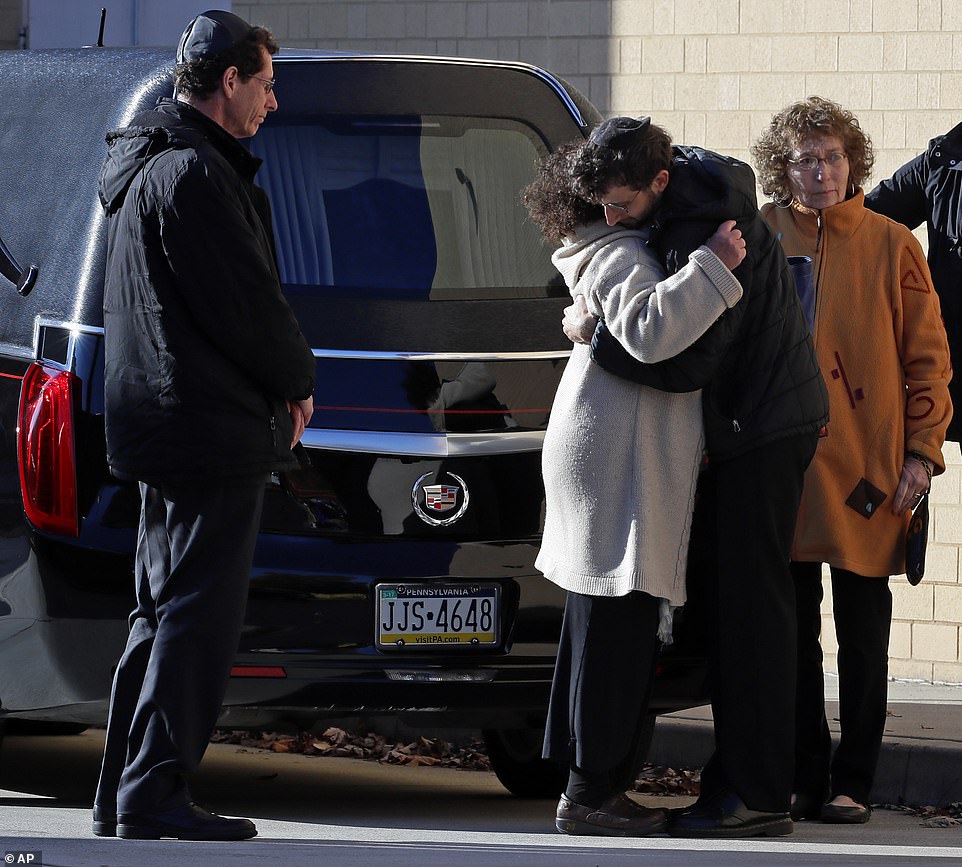 Mourners console one another outside the Jewish Community Center in Pittsburgh before the funeral of Dr. Jerry Rabinowitz 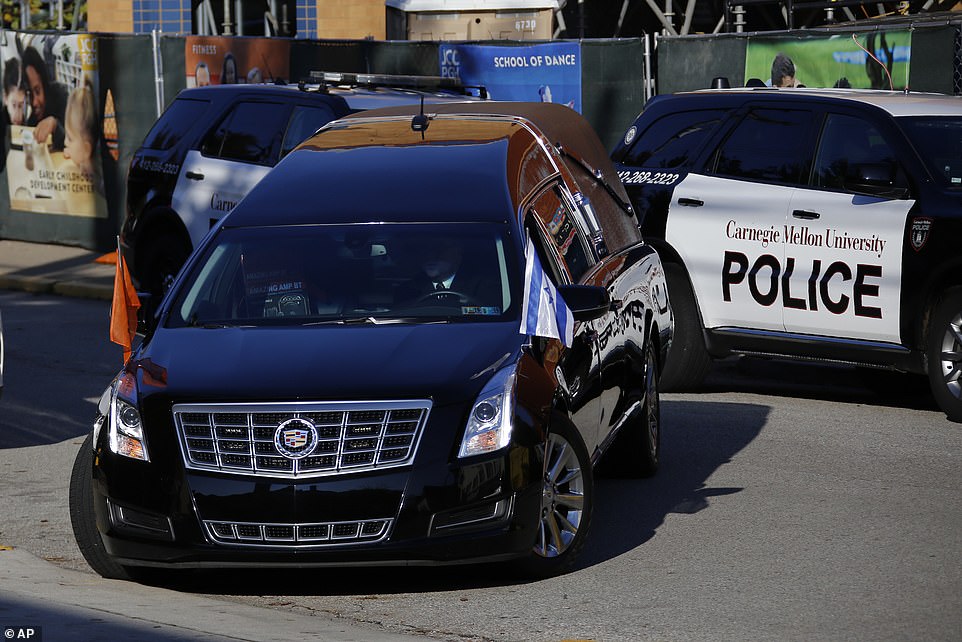 Dr. Rabinowitz’s body is pictured arriving at the center ahead of the 11am funeral service on Tuesday morning 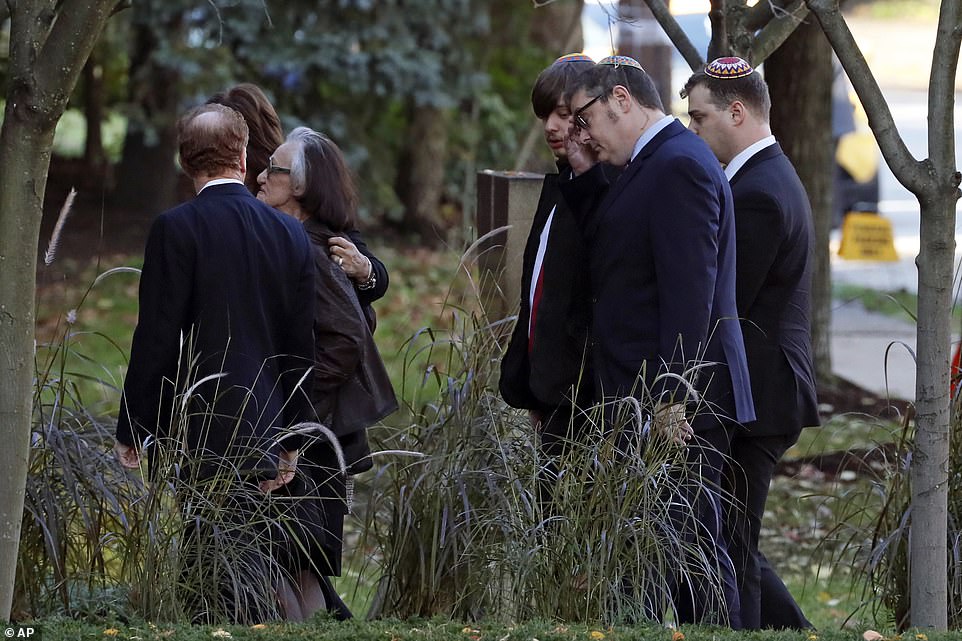 Mourners walk into the Jewish Community Center in Pittsburgh for the funeral of Jerry Rabinowitz, one of the 11 people murdered on Saturday 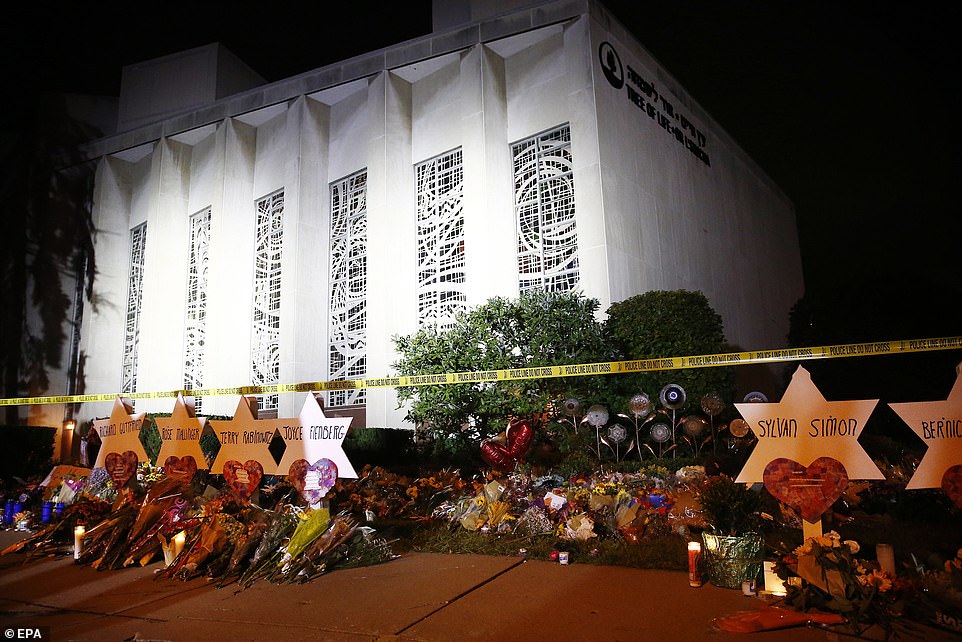 This was the scene outside the Tree of Life synagogue on Saturday night where tributes to the dead growing beneath police tape. The synagogue’s rabbi has said it can never be reused in its current condition and that the bullet holes inside are ‘too numerous to count; 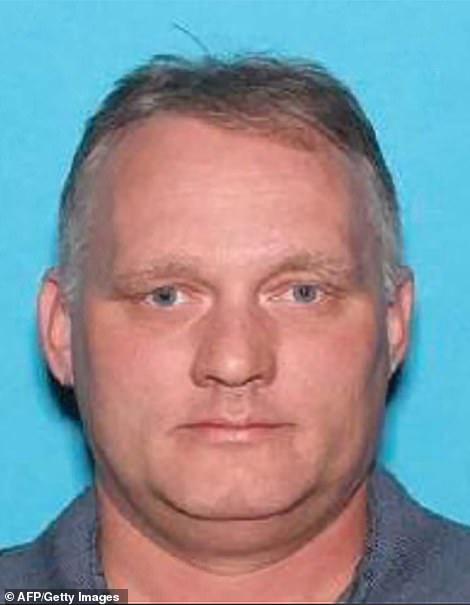 Rabinowitz, 66, had a family medicine practice and was affiliated with UPMC Shadyside hospital. The UPMC hospital system described him as one of its ‘kindest physicians.’

Rabinowitz also was a go-to doctor for HIV patients in the epidemic’s early and desperate days, a physician who ‘always hugged us as we left his office,’ according to Michael Kerr, who credits Rabinowitz with helping him survive.

‘Thank you,’ Kerr wrote on Facebook, ‘for having always been there during the most terrifying and frightening time of my life…. You are one of my heroes.’

Stein, 71, was a visible member of Pittsburgh’s Jewish community, where he was the men’s club president at Tree of Life. He was among a trio of members who made up the ‘religious heart’ of New Light Congregation, one of three that meets at the synagogue, co-president Stephen Cohen said.

Stein’s nephew Steven Halle told the Tribune-Review that his uncle had a dry sense of humor and a willingness to help anybody.

‘He was somebody that everybody liked,’ Halle said.