The first funerals of the victims of the Russian shopping mall fire, which killed at least 64 people on Sunday, are being held in the Siberian city of Kemerovo.

Dozens of mourners were seen saying their final goodbyes at tiny caskets for some of the more than 40 children who perished in the fire, believed to have been caused by a series of appalling safety blunders.

Investigators identified a short circuit as a possible cause, and said the emergency exits at the Zimnyaya Vishnya mall were locked shut, hampering an evacuation.

Final goodbye: A woman stands over one of the caskets during a funeral ceremony for some of the victims of the Kemerovo shopping mall fire disaster 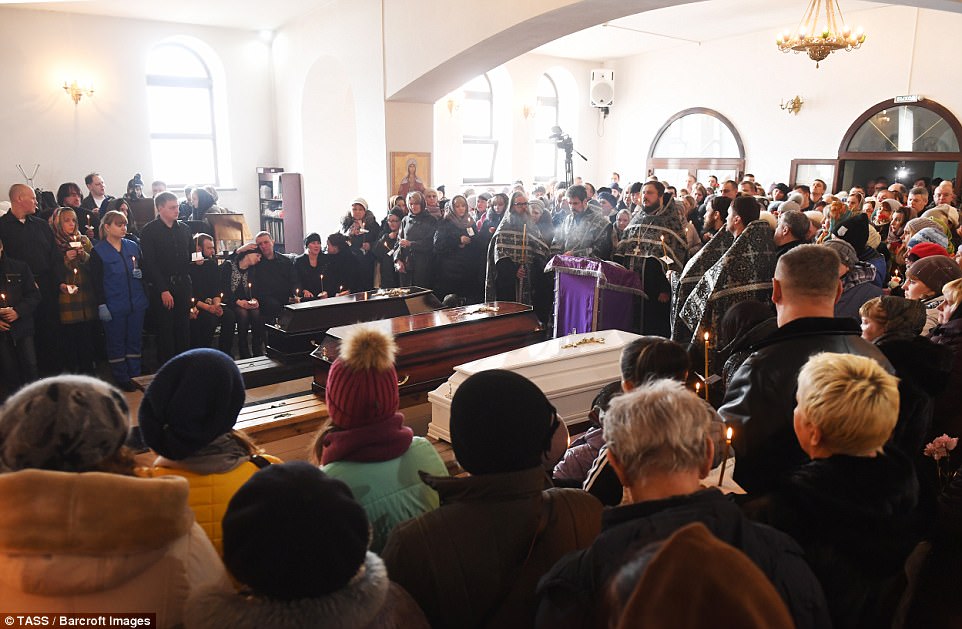 United in grief: Dozens attend the funeral of some of  the Kemerovo shopping mall fire victims at the Holy Trinity Cathedral Heartbreaking: A woman holds on to a casket for a child victim of the fire at the Zimnyaya Vishnya shopping centre, which killed at least 64, many of them children 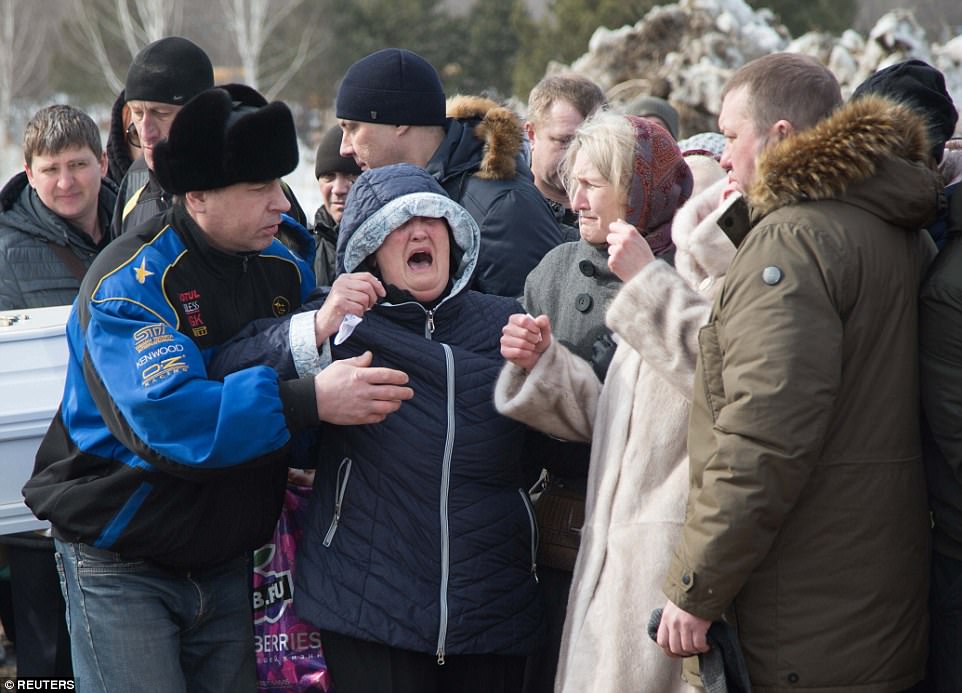 Emotional: One woman breaks down during the funeral, held in the wake of the shocking fire disaster

Some of the victims died in a locked movie theater, while others perished because of a lack of fire alarms, and an inept response to the blaze.

Officials say 64 people died in Sunday’s Kemerovo catastrophe, but local activists representing relatives of the victims  claim they have a list of some 85 names of local people missing after the fire – a discrepancy of 21.

‘All data was received either in person, via email or text message,’ said a spokesman. ‘There were repeated surnames. Some 70 per cent of the missing people were children aged between ten and 13.’

One representative of the group said the number of bodies may not match because of the extreme heat inside the scorched cinemas.

‘For a long time there was a high temperature in the building, many bodies literally turned to ashes.’ 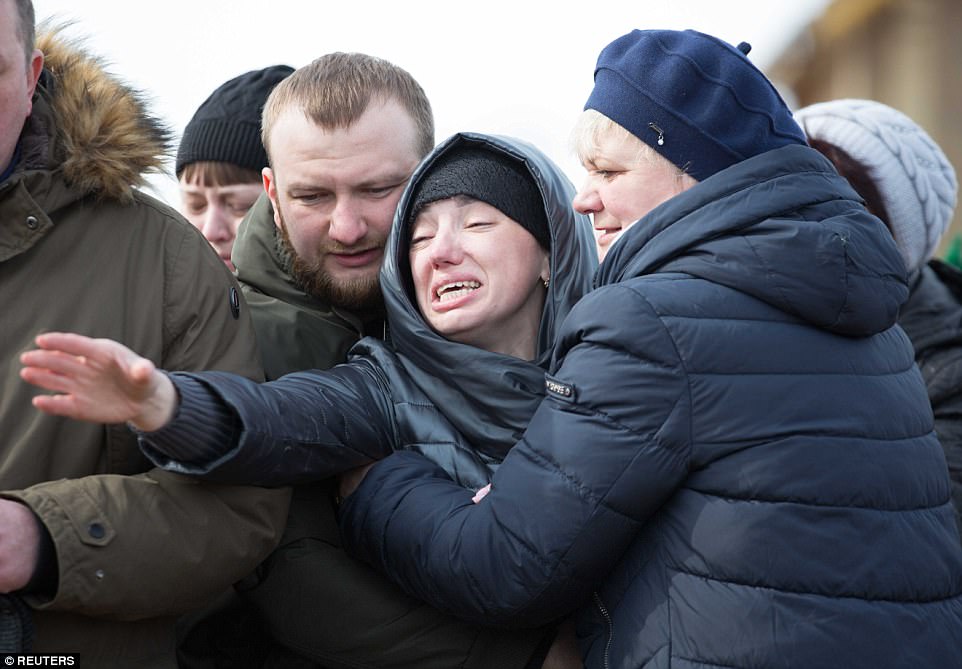 Grief: A woman cries during a funeral service, as it is revealed that seven in ten of the missing in the fire are children 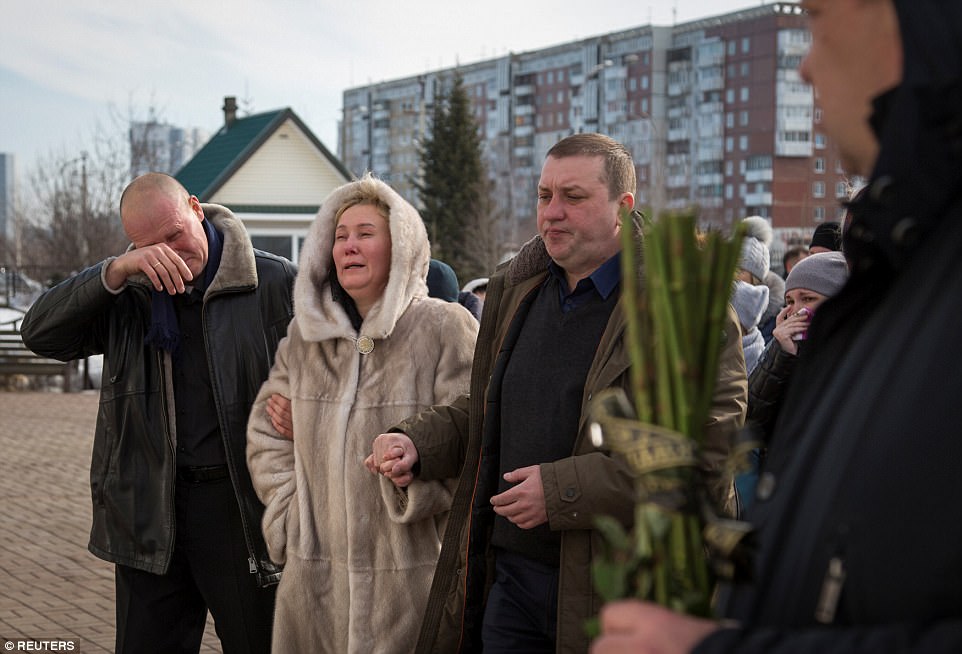 Tears: Family members and relatives walk into the cathedral for the funeral ceremony on Wednesday 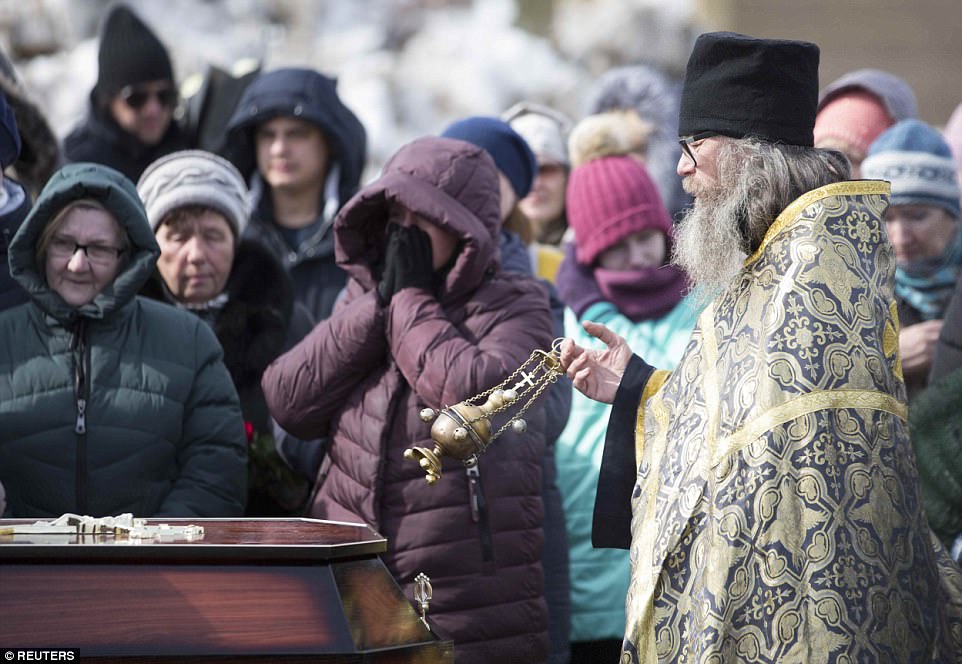 A priest conducts a service during a funeral of a victim of a shopping mall fire at a cemetery in Kemerovo, Russia 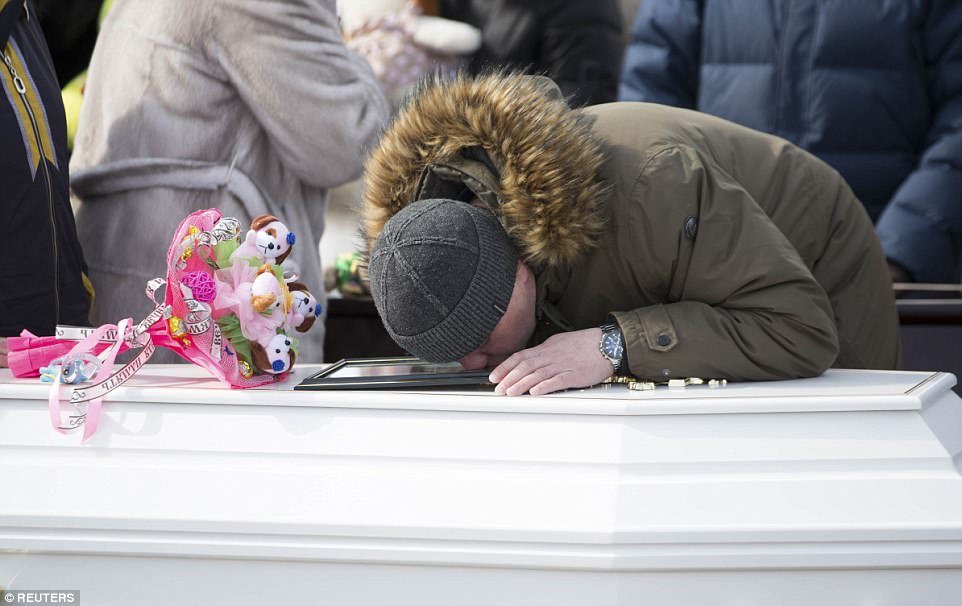 Loss and anger: A man kisses a photo during a funeral of a victim of the shopping mall fire, as local activists accuse Russian officials of lying about the number of people lost in the catastrophe 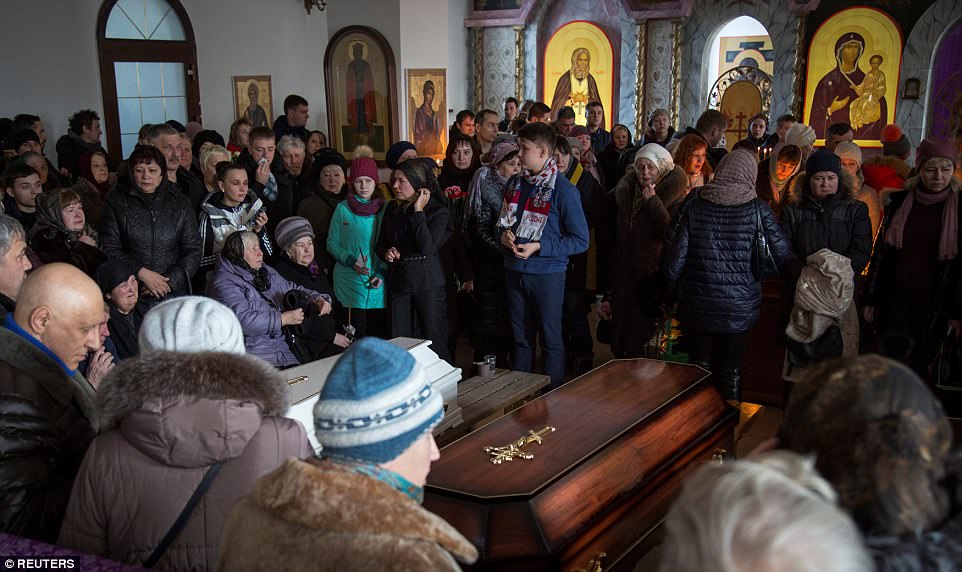 As funerals for 14 of the 27 identified victims take place in Kemerovo today, local activists say they have a list of 85 people missing – warning that it might get even longer 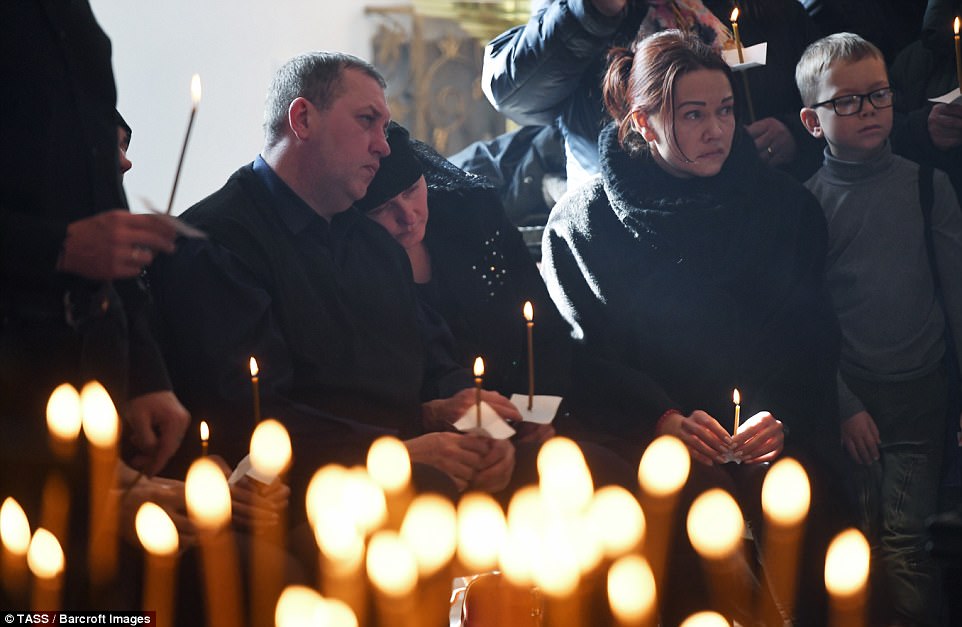 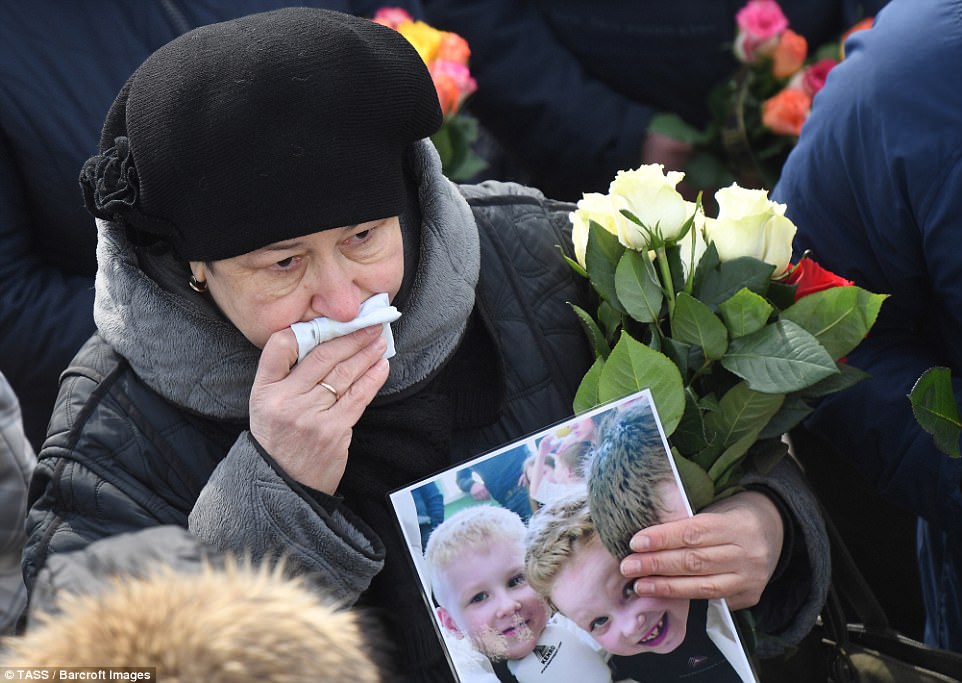 City in mourning: An elderly woman holds roses and a portrait of  some of the children who died int he fire 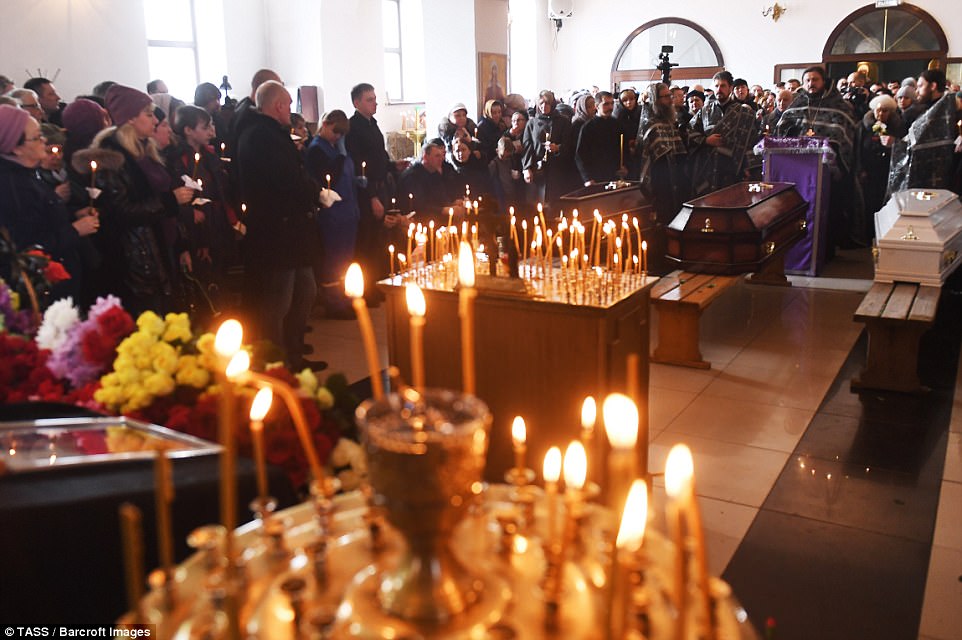 Russia is observing a day of mourning on Wednesday, with thousands of people across the country bringing flowers and stuffed toys to makeshift memorials Igor Vostrikov, 31, who lost his wife, sister and three children under the age of eight in the horror, has led claims that that the death toll was higher than admitted.

Speaking at a rally in the town yesterday, he said ‘We’re not calling for blood. The children are dead, you can’t give them back. We need justice.’

As the sombre process of burying the dead got underway, so far only 27 bodies have been formally identified. A total of 14 of these were expected to be buried today.

Andrey Nikulin, who lost his 69-year-old mother, his sister Evgenia and son Slava, ten, in the fire told today how he ‘heard them die’ in an anguished phone call.

‘They called my wife and I saying “Fire, fire, the cinema is all in smoke… doors are locked, we can’t get out”.

They begged firefighters to go to the gasping people – but the rescuers insisted on first finding the start of the fire.

‘We were in despair, shouting at them that our relatives were still alive, asking to save them, but they replied – “we’re acting according to instructions”.

‘My sister silently said to me on the phone – ‘Andrey, we…’ and stopped talking. My mother picked up her phone and said – ‘This is it, we lost her, she fainted’.

‘My son was crying and asked – “When will we be rescued?”

‘My mother panicked at first but later she spoke in a calm voice, almost indifferently – “It’s all over, you won’t make it”. Gathering: People attend a rally organized via social networks, in memory of victims of a fire in the Kemerovo’s Zimnyaya Vishnya shopping center at the Pushkinskaya Square in central Moscow 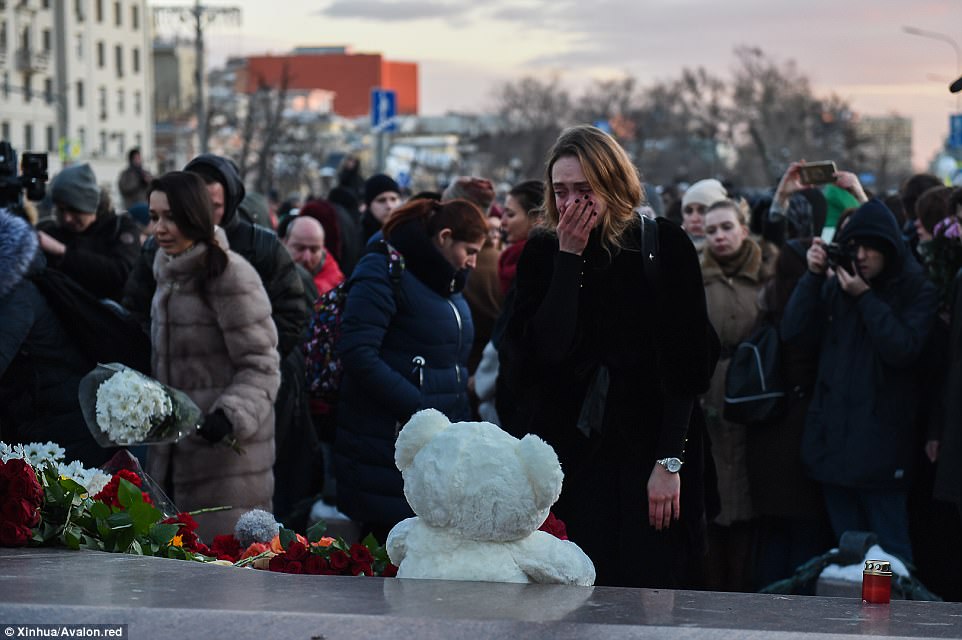 In memoriam: A woman cries as other attendees leave flowers and soft toys during a ceremony in Moscow on Tuesday 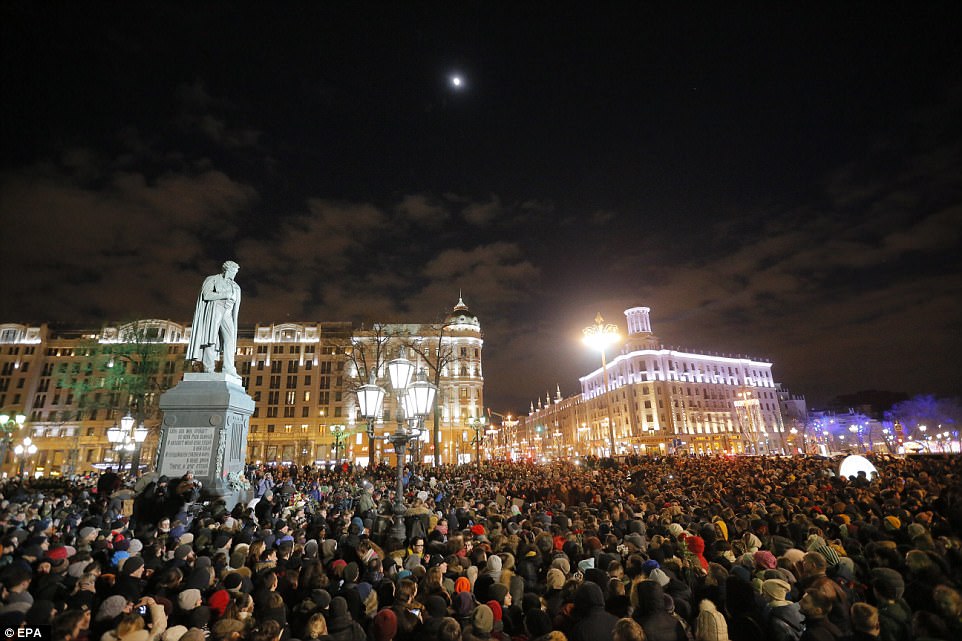 Respect: Some 12,000 people were reportedly in attendance at the rally on Tuesday evening ‘Her voice was getting weaker and weaker. Probably she was watching the horrible scene around her, the cinema full of children…

‘Other men and I tried to get to the 4th level, but the rescuers were holding us back and did not let us go. I breathed in so much smoke, I was coughing with black for another day.

‘But the worst thing is to know that I could do nothing to save my family. I have on the phone how they died… How can I live with it now?’

Last night, some 12,000 people gathered in Moscow, near the Kremlin, to pay tribute to the victims.

‘There are no words to express the pain and grief,’ Moscow City Duma speaker Alexei Shaposhnikov said. ‘We keep all our words deep in our hearts.’

Putin order today to be a day of mourning across Russia’s 11 time zones from the Baltic to the Pacific.

Flags were flying at half mast and entertainment shows on TV were cancalled.

A three day mourning period is underway in Kemerovo region in Siberia, the centre of Russia’s coal-mining industry.